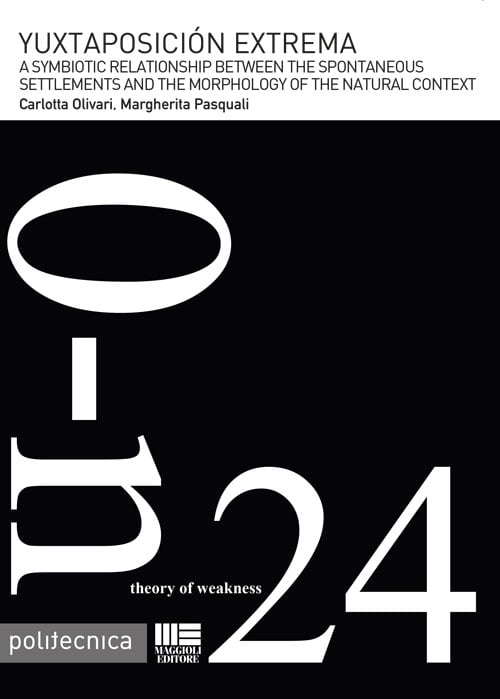 This thesis aims to investigate the issue of informality. Specifically, it is analyzed the symbiotic relationship between the informal development and the morphological conformation of the natural context, with the consequent intersection of the inhabited space and the natural one. Studying and intervening in this context, means giving a reading of the informal space, which can not disregard the social and political aspects that characterize the area of development. The spatial interaction between the natural context and the informal advancement is extreme in the Chilean territory. After developing a transdisciplinary theoretical-design platform between the landscape architectural, philosophical and sociological fields, the final objective of the thesis is to apply the defined design method in response to the endemic problems detected in different places. The aim is to show that the natural context becomes an essential dynamic resource in the informal development process; therefore, the strategy of the outlined architectural intervention, which takes into account social interactions and therefore the human factor, must be related and conform to this natural process. ?0-n? is a collection of master thesis which I oversaw as supervisor at Politecnico di Milano. These books are a platform of heterogeneity, which find their common field in the theory of weakness, as imperfect and manifold way of knowledge. The aim is to experience an alternative method for contemporary spaces, able to regenerate the stabilized ideas of design. They are more experimental and vital texts/tests than verification procedures: this attitude brings them away from a strictly educational approach. They can be read according to two levels of meaning: in their specific contexts and as open platforms for contemporary researches. Almost all of them are focused on processual values and on project transdisciplinary, in order to promote a cognitive space before a real one. I provided the students with fews thematic lines (a sense of short- circuit, trial, process of meaning), which were underlining an interpretation of knowledge in a horizontal sense, as Gilles Deleuze had defined.These topics have been independently developed by the candidates, so that they can be considered as authors of a new idea. I instructed this learning and researching method, because I belive that the secret of an effective education in to coinvince each student to be able to build his own vision of the world, without stereotyped positions. I am finalising the object of education in the freedom of intelligence, and not in the rules of disciplines, by broading the students' needs and points of view. To cross the world in new expanded geographical horizons.

Graduated from the Polytechnic of Milan in Architecture with honors (2019), during her university career she won the Erasmus scholarship at the FAUL, Lisbon and subsequently won the scholarship "Tesi all'estero" at the PUC, Santiago del Chile. Among her work experiences she takes part in the landscape architecture team in the invitation competition "Budapest Southgate" with Peter Eisenman, DEArchitects and Weakcircus and carries out a research period at MS-Lab Milan on the project "TELL ME". In 2018 she founded Dispace Landscape Architecture, a research platform, with M. Pasquali.

Currently PhD Fellow at the University of Trento in "Architecture, Planning and Landscape". Graduated from the Polytechnic of Milan in Architecture with honors (2019), during her university career she won the scholarship "Tesi all'estero" at the PUC, Santiago de Chile. Among her work experiences she takes part in the landscape architecture team in the invitation competition "Budapest Southgate" with Peter Eisenman, DEAarchitects and Weakcircus and carries out a research period at MS-Lab Milan on the project "TELL ME". In 2018 she founded Dispace Landscape Architecture, a research platform, with C. Olivari.

Architect and Master in Architecture UC (2006); Master in Critical, Curatorial and Conceptual Architecture Practices, GSAPP, Columbia University, New York (2013). He is the author of the Latin American Architecture Guide: Santiago de Chile (Buenos Aires, 2008) and co-editor of the books SCL2110 (Santiago, 2010), Promiscuous Encounters (New York, 2014), and Who Cares for Chilean Cities? (New York and Santiago, 2014). He is currently Assistant Professor at the School of Architecture of the Pontifical Catholic University of Chile and, since 2015, General Editor of ARQ Editions and ARQ Magazine.

Elisa C. Cattaneo Graham Foundation Grant Recipient in 2014, is adjunct professor in landscape design at the Politecnico di Milano. She researches on experimental ecological design and their theoretical implications. After receiving her degree in architecture, she attended a master program in strategic planning for architectural, urban, and environmental resources. in 2009, she received her PhD in architectural and urban design. She continued to develop her research interests as a visiting scholar at MIT (2010) and at Harvard University's Graduate School of Design (2011-12). She is founder and director of the independen research agency WeakCircus, through which she studies, researches, and develops projects on contemporary urbanism related to the theory of weakness.