The Italian Open: sport and spectacle at Foro Italico Two records have been smashed in the space of 24 hours at the current Italian Open. With a crowd of 34,406 people on May 10, there had never been so many paying spectators at a single day of the event. But the record was broken again for the Italian derby between Jannik Sinner and Fabio Fognini, with 36,803 spectators buying tickets for the evening session.

Now being held for the 79th time, the Italian Open is among the most important tennis tournaments in the world. The event got underway last Sunday and will continue through Sunday, May 15, when the finals will be played. On the evening of Thursday, May 12, most of the stores in the historic center of the Italian capital will stay open till 10 p.m. for what’s become known as Rome’s Night of Tennis.

The Italian open is on the ATP Tour Masters 1000 calendar and among the most prestigious events in the tennis world, after the Grand Slams in Melbourne, Paris, London, and New York. For the twelfth consecutive year, the Rome tournament is a combined event, with the matches in the men’s and women’s draws alternating, along with their respective doubles games. The Foro Italico complex has 14 clay courts, eight of which are used for singles and doubles matches and the rest for practice.

Audiences return to the Italian Open after two years of pandemic After closed-door games in 2020 and reduced capacity crowds in 2021, the fans have returned to the stands of Foro Italico for the 2022 Italian Open. This was therefore a highly anticipated edition of tournament, with expectations further fueled by recent major successes of Italian tennis stars. Unfortunately, Italy’s number-one, Matteo Berrettini, is missing because of injury concerns. After the exit in the first round of some of Italy’s biggest stars, the country is now represented by Jannik Sinner and Fabio Fognini, who faced each other in an unprecedented derby on Wednesday 11th. Sinner won the match and has progressed to the last 16 of the tournament. While the Italian Open offers audiences the best in international tennis, the venue itself is no less spectacular, with a magical atmosphere that captivates both audiences and players alike. Home to Italy’s most important tennis club, the Foro Italico sports complex is in the foothills of Monte Mario in Rome’s Farnesina district, between Ponte Milvio, the Tiber, and Villa Madama. The person who first came up with the idea for the complex was fascist politician Renato Ricci in the late 1920s. Architect Enrico Del Debbio was brought in to design it, with the aim of visually associating the practice of sport with the ideals of the fascist regime. It was inaugurated in 1932 with the name “Foro Mussolini.” The striking marble obelisk designed by Costantino Costantini in Piazza Lauro De Bosis, the entrance to the complex, was also dedicated to Mussolini. The monolith is the largest block of marble ever extracted from the Apuan Alps. Before entering, spectators pass by the headquarters of the Italian National Olympics Committee, the red Palazzo H, designed by Del Debbio in 1927 and named after its distinctive H shape, and Palazzo delle Terme (Costantini, 1930), occupied by Italy’s ISEF college of sport and the auditorium of Italian national public broadcaster, the RAI. Another highlight is the Foro Italico swimming pool, with floor mosaics designed by Giulio Rosso. A little further on is the Fencing Academy, designed by Moretti in 1934. 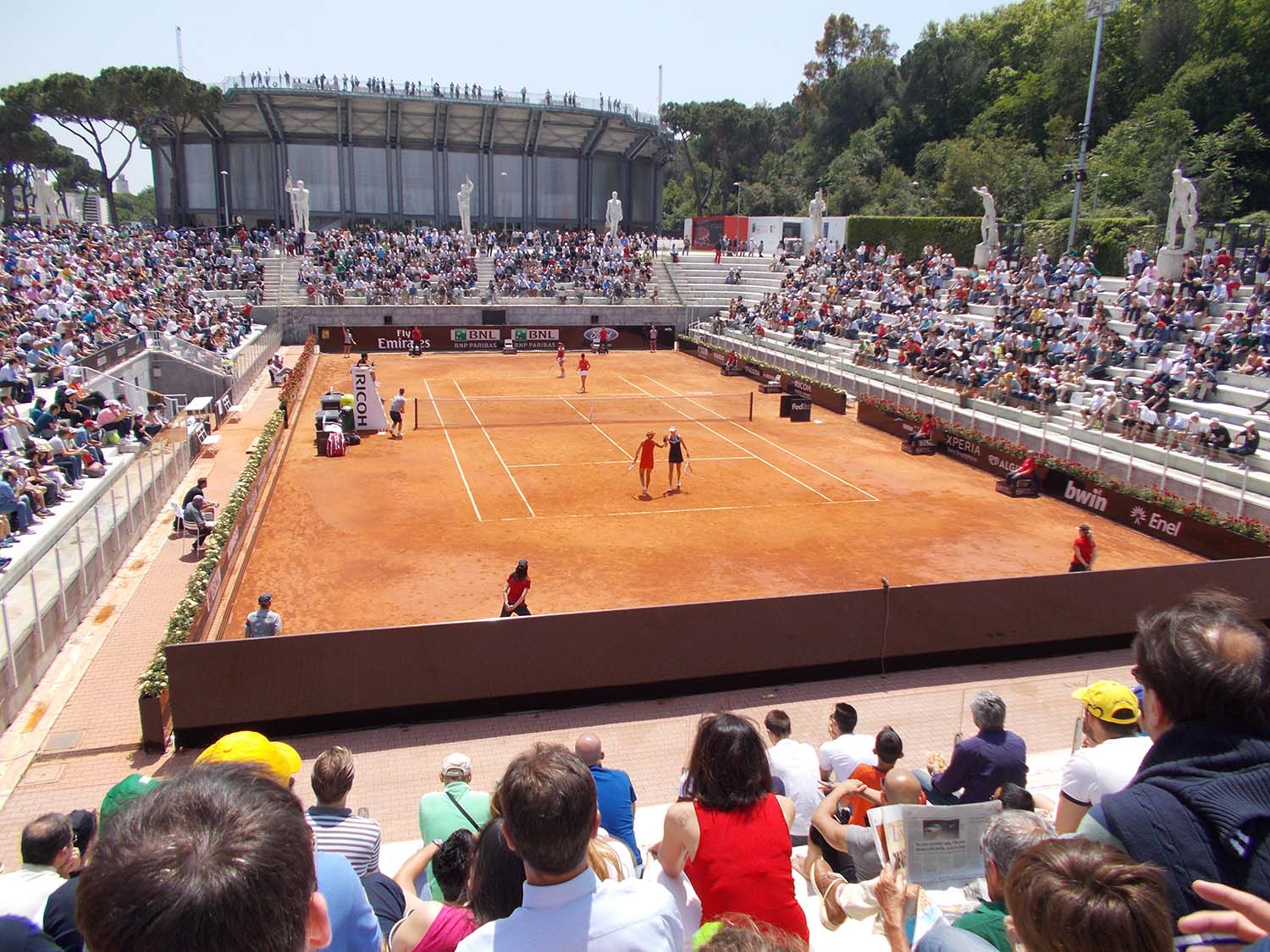 The most prestigious building of the tennis club is the stadium dedicated to Nicola Pietrangeli, who, along with Adriano Panatta, ranks as the greatest Italian tennis player of all time. Inspired by Hellenic architecture, the stadium has seating for 3720 people and is surrounded by 18 white Carrara marble statues that depict athletes participating in various Olympic disciplines. The statues are cleaned before every tournament, their spotless white creating a striking contrast with the green lawns. Previously known as the Pallacorda Stadium, the facility forms the heart of the club and is the only one to have remained unaltered since it was first built. Depending on where they’re sitting in the stadium, spectators can admire the other sights around the Foro Italico complex and beyond. On one side is Monte Mario. On the other is the imposing Olympic Stadium and the striking Stadio dei Marmi, used for athletics events. You can also see the main court, the largest of the 14 facilities with seating for 15 thousand, which has undergone many major changes over the years. Foro Italico will also soon have a court with a retractable roof, making it possible to host matches throughout the year.

Foro Italico: tennis and much more During the Italian Open, the Foro Italico complex doesn’t only welcome gusts to the central and Pietrangeli stadiums. Its courts include the Next Gen Arena, or Grand Stand, which seats five thousand. The complex also has many food and dining options, a hundred stores, and hospitality services of all kinds. Its Fun Areas for kids are very popular, offering a tennis court on Viale delle Olimpiadi and a service speed simulator (Ricoh Speed Cage) on Via Canevaro. In this last area, kids (and not only kids) can meet their favorite players as well as have a game on the padel court. 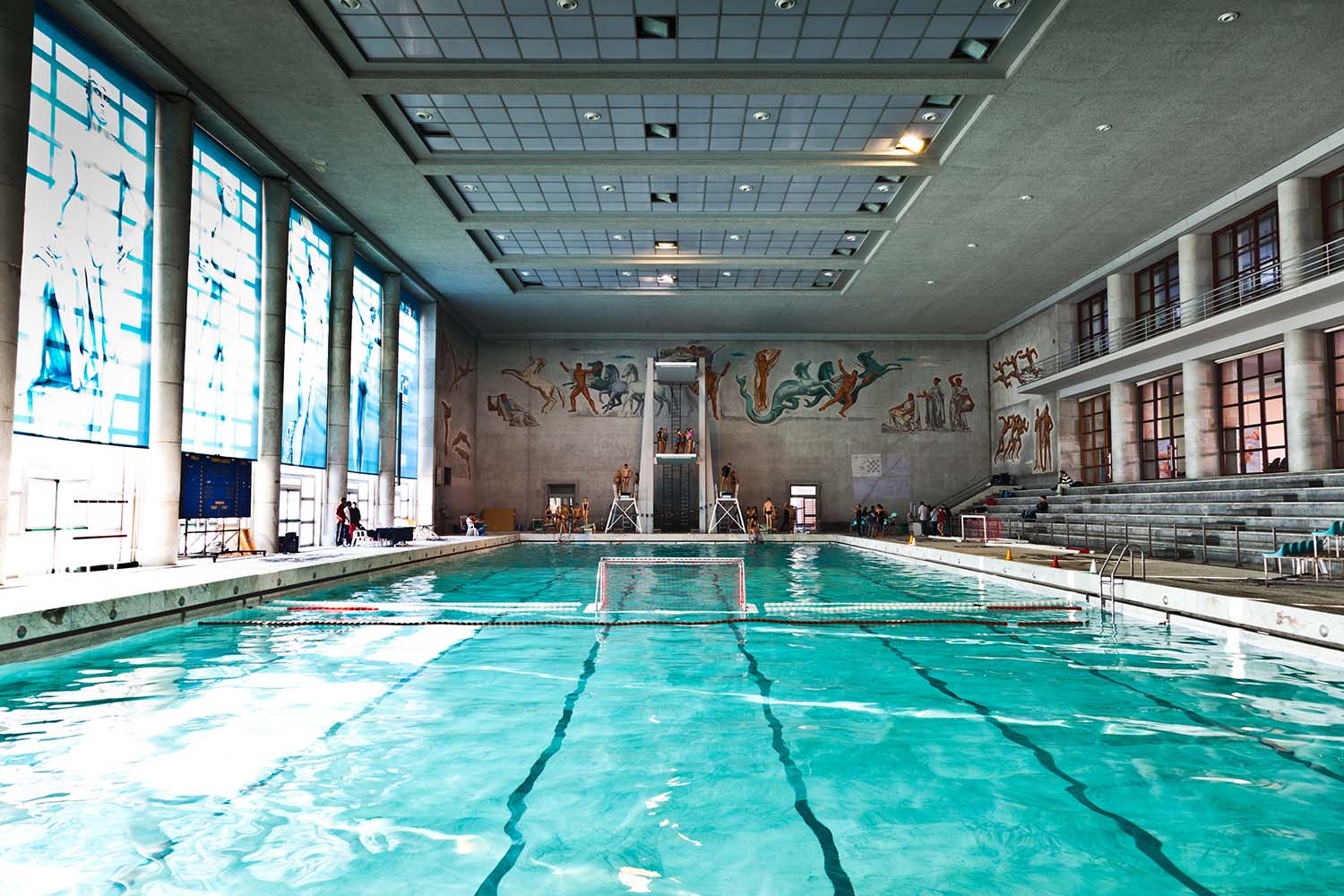