ATTRACTING OVER 2000 EXHIBITORS TO MILAN IN JUNE, THE EVENT’S KEY THEMES FOR 2022 ARE DESIGNING SUSTAINABILITY AND CELEBRATING BEAUTY 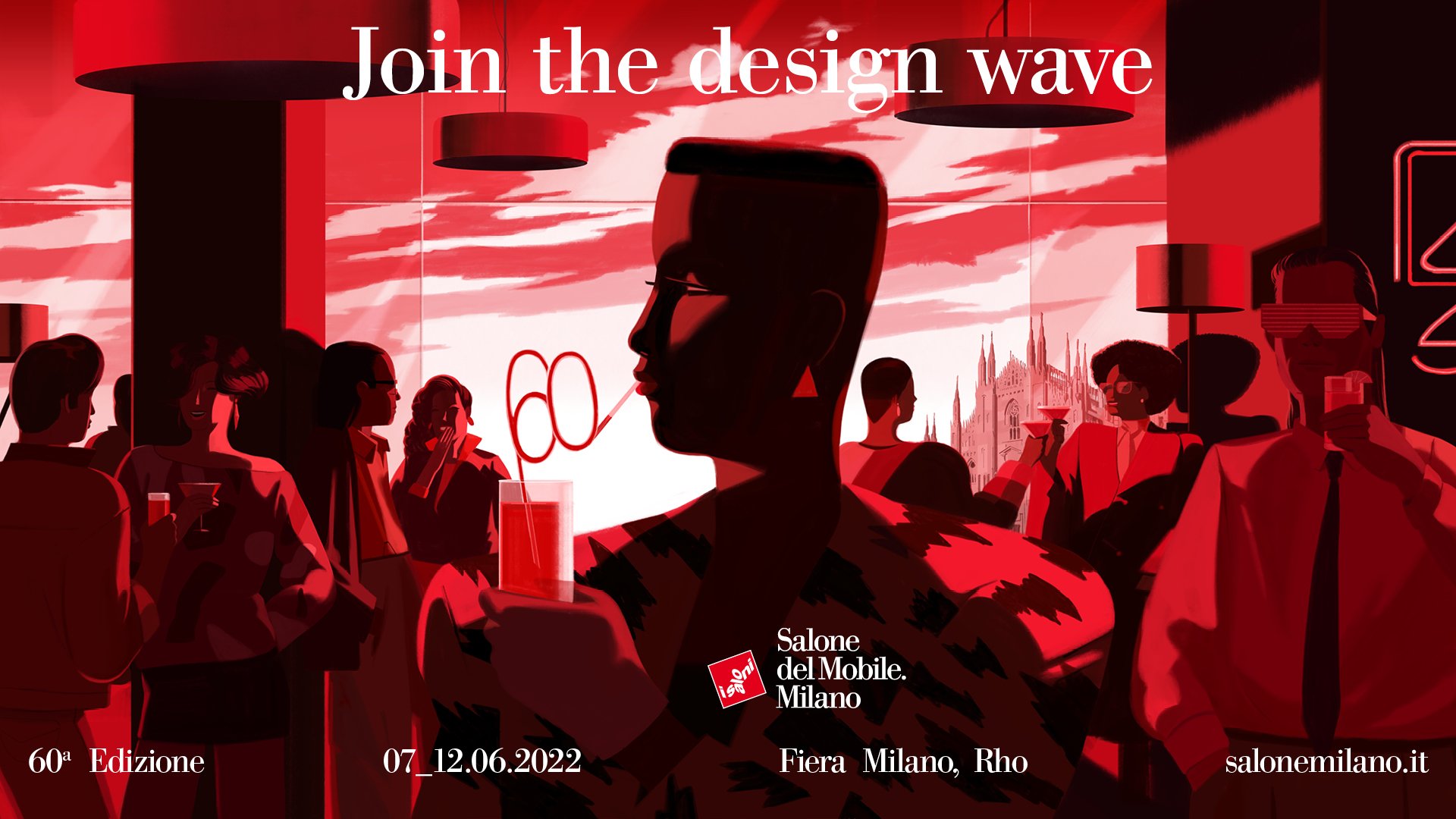 “The Salone del Mobile has always been a catalyst for creativity, positivity, and energy. It generates beauty, inclusion, and new opportunities. Today more than ever, we want the exhibition to act as a meeting place for cultures and styles from around the world.” This is how Milan’s 60th Salone del Mobile was officially presented at the Teatro Lirico by exhibition president Maria Porro. As announced early this year, the event was postponed to June 7–12 at Fiera Milano Rho. After the cancellation in 2020 and a Supersalone 2021 that attracted over 60 thousand visitors in just five days, this will be the 60th Salone del Mobile, a landmark that will be celebrated by a special emphasis on its ongoing commitment to quality, innovation and sustainability. It’s also being marked by the illustrations of Emiliano Ponzi, who’s creating a series of six posters with images inspired by the close relationship between Milan and the exhibition, and reflect on the changes that have happened since 1961. 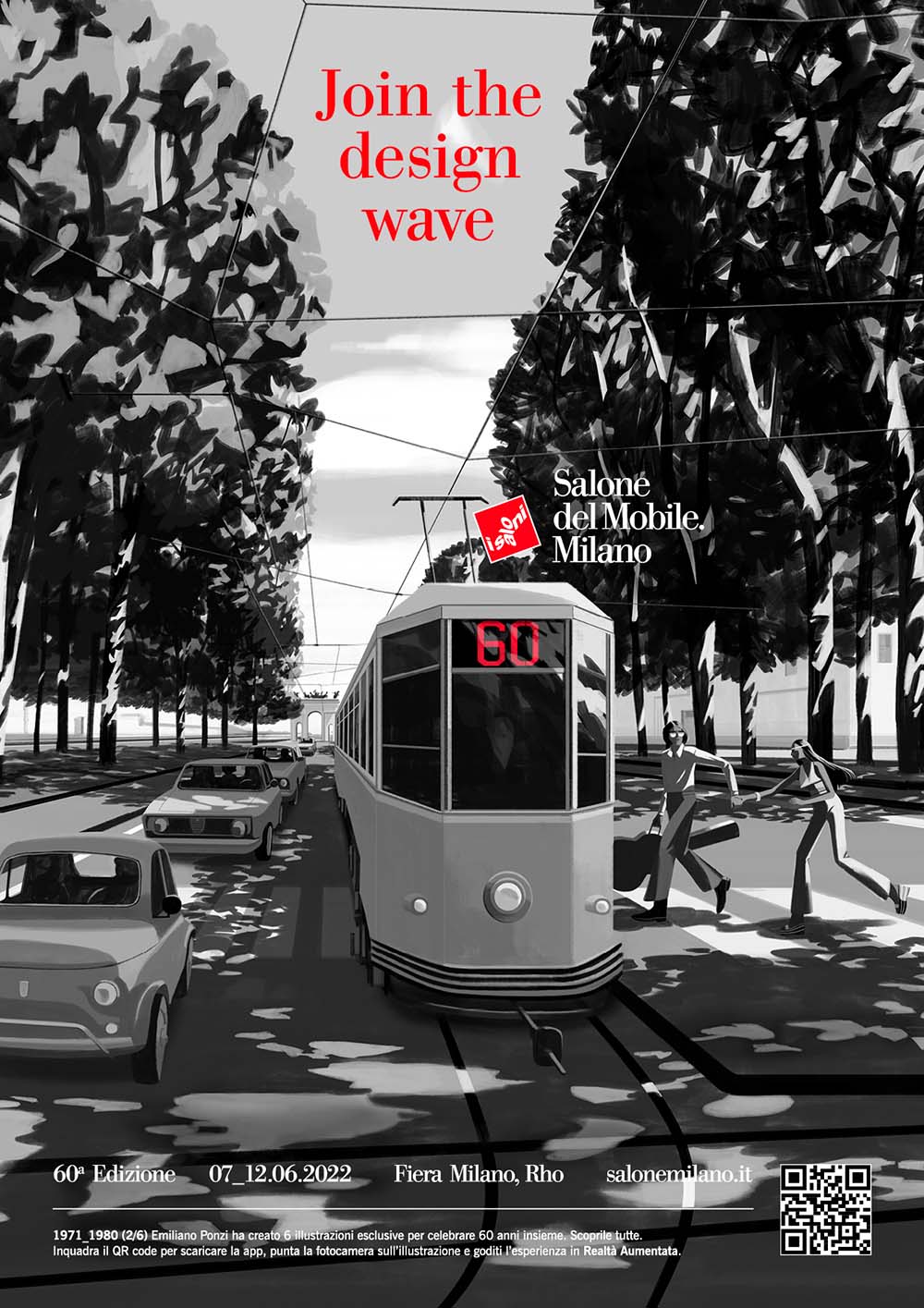 One poster has a tram in Corso Sempione, for example, depicted in black and white with a splash of red. Various elements conjure up the time period. Despite their complexity, the string of cars near the tram, and the clothing and attitude of two figures inspire reflection, creating a space that each viewer can fill with their own experiences. In this way, Ponzi’s static images express a relationship and a history that’s constantly changing. The symbolic images created for the 60th Salone will, however, also be viewable in augmented reality, accessed via a QR Code, a move intended to encourage public participation. The objectives of the 60th Salone del Mobile are ambitious, not only because the organizers intend to demonstrate that it’s both possible and crucial to start holding major international events again, but also because they have made sustainability a key element of the event:

“We firmly believe in the need for real and immediate ecological transition,” says Porro. “It was precisely for this reason that we want the whole event to act as a positive force for ethical behavior. An example is our investment in the largescale project by architect Mario Cucinella. Companies and creatives will be able to physically touch alternative materials that are already a reality, let themselves be inspired by a vision of urban areas as potential goldmines of raw materials, and reflect on the function of our homes as cells that make up a more complex organism: the city. Our commitment to sustainability also gives the exhibition competitive advantage.”

Salone has released guidelines to help exhibitors, and the people who design and build their stands, to follow basic sustainability criteria. The guidelines recommend materials that are reusable (such as wood), upcycled, with low environmental impact, or FSC and PEFC certified. It asks exhibitors to assess the sustainability of the sources supplying the materials; to avoid wasting materials, electricity, and water; and to ensure that components are selected for their adaptability and suitability for disassembly and reuse, with a clear idea of how and where they can be reused or disposed of.

Design with Nature by Mario Cucinella

Design with Nature, an installation created by architect Mario Cucinella, symbolizes the Salone del Mobile’s commitment to sustainability. Occupying a space of over 15 thousand square feet (1400 m2) in Hall 15, this project contemplates the meaning of the word sustainability and the possibilities of creating cities that serve as reserves for the future. The cornerstones of the work are therefore ecological transition, the home as the basic building block of urban spaces, and the city as a mine. At first glance, the installation looks like a huge table with fluid, dynamic shapes in a plaza that invites social interaction. The intention is to achieve a new balance with nature, which is itself the driving force behind design and its choice of materials. And the materials chosen for the installation include fish scales, mangoes, and bamboo. “Design is a place of peace,” commented Mario Cucinella, “in this case between humans and nature as a starting point for forming ‘a new friendship’.”

In the same way as molecules combine and separate, the parts of this installation will be disassembled and reused when the exhibition is over. They will therefore have a new life and new uses, including a small school library, a classroom, a seat in a public space, and a laboratory table.

“It’s a large space mindful of design and the environment that’s dedicated to the new vision of society,” says Cucinella. “An installation in which the word ecosystem is fundamental and with which we aim to show that our vision of the future needs to be ecosystemic and able to connect knowledge, skills, and technologies for a new generation of materials and design. The ultimate goal of ecosystemic knowledge, if we can call it that, will be to make life better through a newfound respect for nature.”

All this takes on a whole new dimension when we consider that the weight of natural elements on our planet, the so-called global biomass, has been overtaken by the weight of objects made by humans, the anthropogenic mass. Cucinella mentions these figures: “1120 gigatons in the first case and 1154 gigatons in the second.”

This year will also see the 23rd Salone Satellite, an event dedicated to under 35s, located, with its overhauled layout, at the start of the main exhibition pathway (Halls 1–3). This year’s theme, Designing for Our Future Selves, will be examined through the idea of a plaza as a place for meeting and sharing, which will serve as a special space for establishing connections between international design schools, young people, startups, and manufacturing. Along with schools and universities, the participating designers come from 48 countries, of which five – Congo, Cuba, Cyprus, Nigeria, and Qatar – are participating in Salone Satellite for the first time.

The Magic Box: a homage to Salone del Mobile in Milan An original approach has been taken to celebrate the 60th Salone del Mobile and tell the story of the event and highlight its core values to an international audience. From June 7–17, “Scatola Magica” (Magic box) will be staged in Palazzo Reale’s Sala delle Cariatidi. Eleven words from eleven artists, this site-specific audiovisual installation is dedicated to the eleven principles that have guided the event since the beginning: Emotion, Business, Quality, Projects, System, Communication, Culture, Youth, Ingenuity, Milan, Knowhow. The same number of Italian directors are involved in the project: Francesca Archibugi, Pappi Corsicato, Davide Rampello, Wilma Labate, Bruno Bozzetto, Luca Lucini, Claudio Giovannesi, Gianni Canova, Donato Carrisi, Daniele Ciprì, and Stefano Mordini. Their aim is to awaken a sense of wonder, to create a memorable experience, and, through the language of the cinema and theater, to celebrate the anniversary of the exhibition and Milan in the name of beauty. 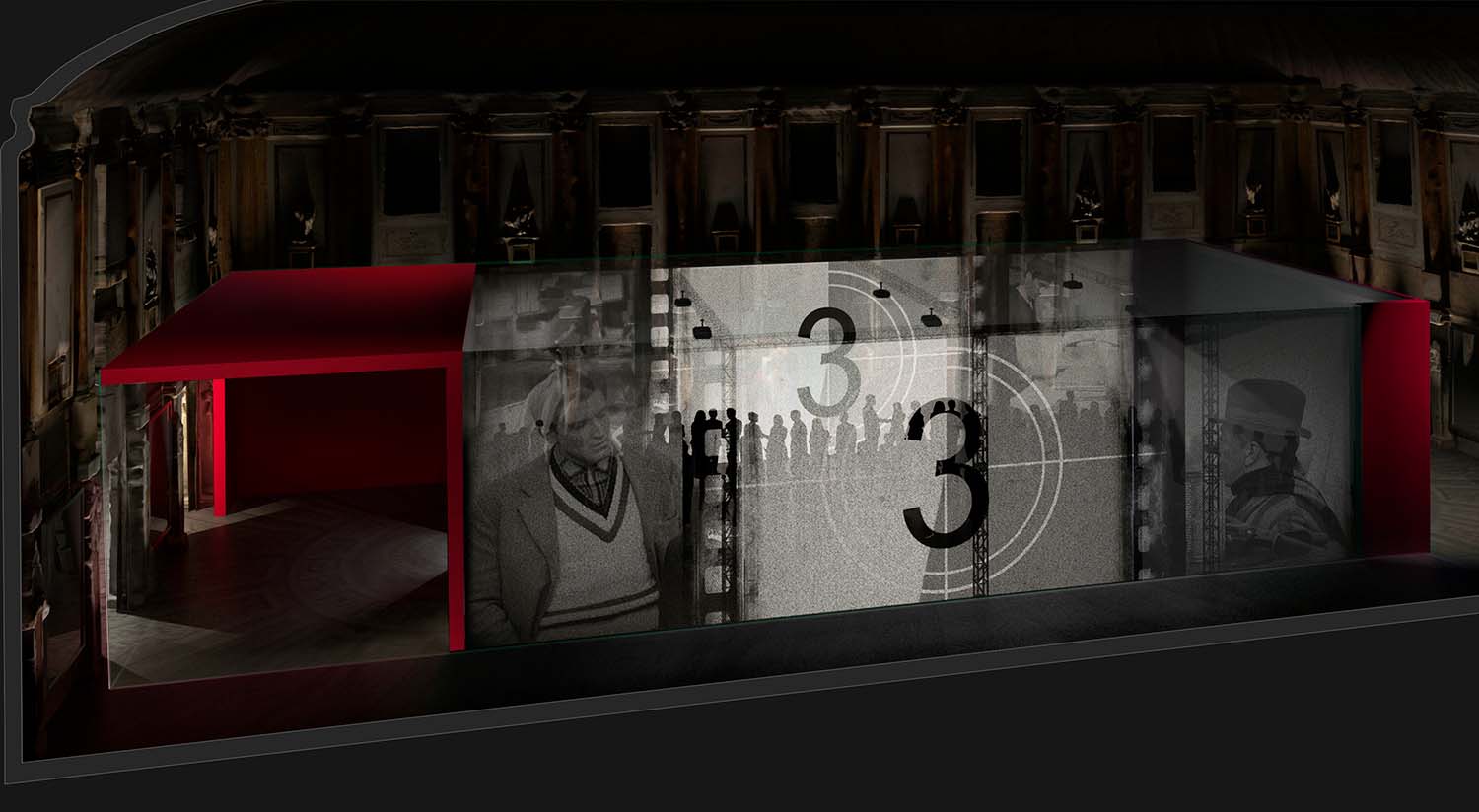 Over two thousand exhibitors are taking part in Salone del Mobile 2022, including 600 designers under the age of 35. Their booths will be simultaneously architectural and communicative creations.

Also held under the umbrella of Salone will be numerous parallel events, such as the Milan Furniture Fair, the International Furnishing Accessories Exhibition, and Workplace3.0. June will also see the staging of the biennial EuroCucina kitchen show, its parallel event FTK (Technology for the Kitchen), and the International Bathroom Exhibition, as well as the second S.Project, an exhibition dedicated to products for the world of design, which will highlight the most important research being done right now into surfaces. This busy program is then capped off by a whole series of discussions and talks.

A scholarship for the 2022–23 academic year that will cover 50% of two students’ fees is among the new projects introduced to enhance the event’s connection with young people, schools of design and architecture, and the city of Milan.

Salone del Mobile is paying homage to Manlio Armellini, one of its founders, with an event shared with the Politecnico di Milano and dedicated to students doing their master’s degree in furniture design.

Salone is also continuing its collaboration with the Teatro alla Scala Foundation, and this year Salone will be opening with a concert by the Orchestra Filarmonica conducted by Lorenzo Viotti, which will be followed by a ballet by Roberto Bolle.

Finally, the Accoglienza (Welcome) project – a collaboration with the Municipality of Milan, Fondazione Fiera, and Milan’s main schools of design – will see students acting as ambassadors for the event, providing the public with information on transport, and the exhibitions on at the Salone and throughout the city. 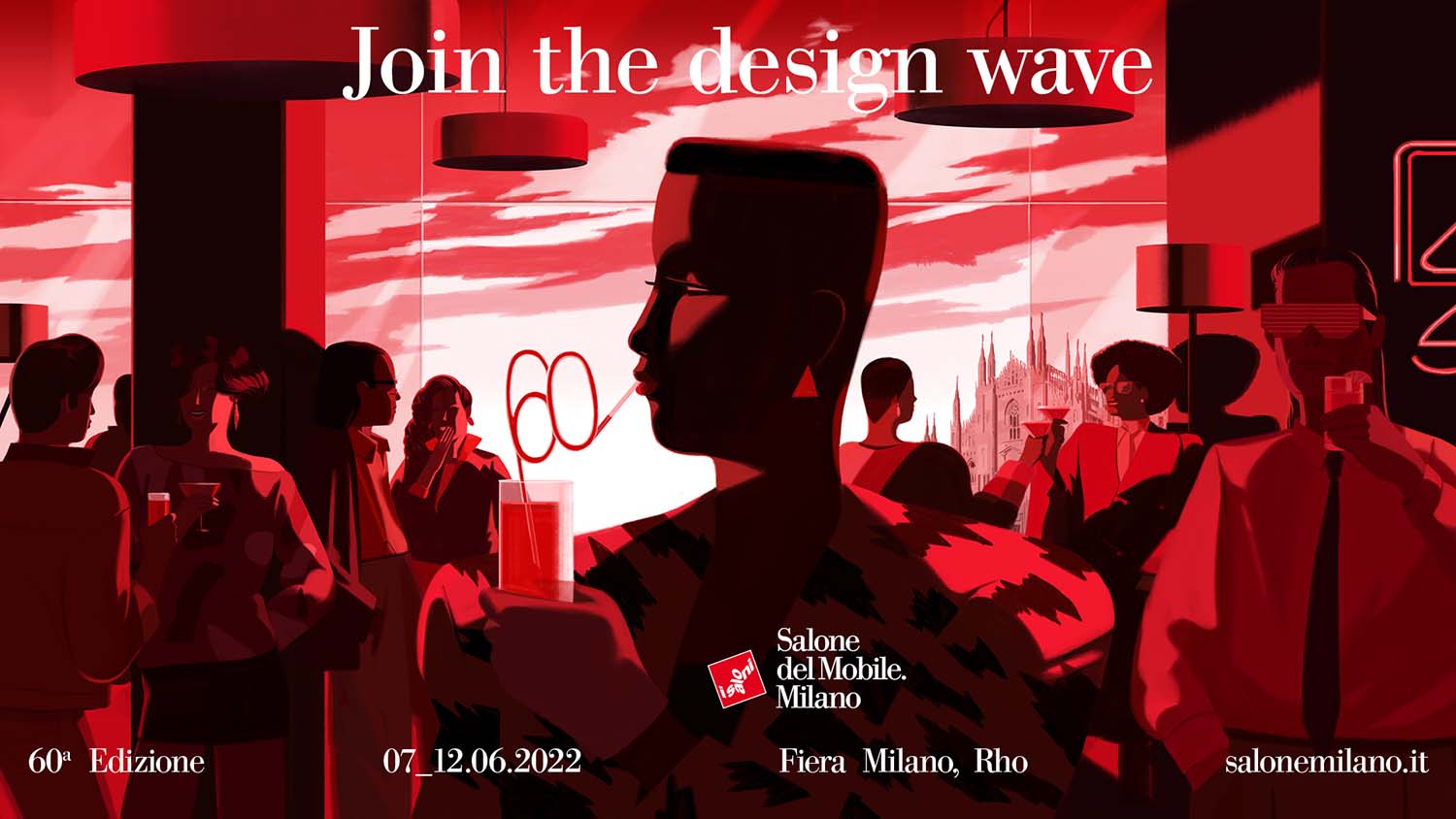 Location: Milano
Date: 7-12 giugno
Please refer to the individual images in the gallery to look through the photo credits