Sir Peter Cook: “We exist to discover and invent”

Only a few days remaining to see the "City Landscapes" exhibition at the Louisiana Museum of Modern Art, Denmark “I’m convinced that we exist to discover and invent.” According to Sir Peter Cook, founding member of Archigram, the optimistic, visionary spirit that energized the architectural avant-garde of 1960s London is still relevant today. “What interests me most,” he continues, “is the vocabulary of architecture: it’s more important to see a lot of works than to create them.” Wearing a dark shirt with white polka dots and round electric blue glasses, Sir Peter talks about a 60-year career as an architect and teacher. He’s sitting by a window overlooking a lush garden at his home in England. One wall is covered with colorful puppets and another by a bookcase full of books. “I’d certainly never design a gray building,” says Sir Peter, who, in six decades of work, has expressed his thoughts through innumerable drawings, many of which have been brought together for the Peter Cook – City Landscapes exhibition, which will be on display at the Louisiana Museum of Modern Art in Humlebæk, Denmark, until Sunday, May 8. “In autumn, the exhibition will be moving to Oslo for the 2022 Architecture Triennale,” continues the architect, who’s currently working on a new book that’s due out a little later this year. “It’s called Speculations and, as well as a large collection of my drawings, it will have texts by Frank Gehry, Thom Mayne, Peter Wilson, and Toyo Ito.”

Who is Peter Cook? Born in 1936, Cook studied architecture at Bournemouth College of Art and the Architectural Association in London, where he later taught for 26 years. He’s also held professorships at the Städelschule in Frankfurt and at Bartlett School of Architecture, UCL. In the 1960s, he founded the avant-garde Archigram studio together with a “ramshackle” group of British architects: Warren Chalk, Dennis Crompton, David Greene, Ron Herron, and Michael Webb. Through the magazine of the same name, Archigram conducted some spirited investigations into design, focusing especially on the theme of the city, looking at its relationships through the lens of new information technologies (the practice’s name comes from architecture and telegram). In the process, the studio influenced a whole generation of architects and urban planners, and helped fuel contemporary discussion of architecture. Among Archigram’s projects is the Plug-in City, a megastructure that incorporates residences, transport, essential services, and giant cranes that are constantly reorganizing the city. In 2002, the Royal Institute of British Architects awarded Archigram the Royal Gold Medal. In 2006, Peter Cook founded CRAB with Gavin Robotham, and, more recently, CHAP, with Erlend Blakstad Haffner and Branko Belaćević.

>>> Read more about Peter Cook’s thoughts and career in Syndromes, Influences, and Projects, the editorial he wrote for THE PLAN 065 Visions of the future are most clearly expressed and are best discussed in drawings, says Cook, whose main aim is to study the language of architecture. Drawings for projects that will probably never be built are therefore still of fundamental importance: “The act of drawing gives you time to think,” since the brain and the hand are closely linked.

When I was a student, I wasn’t good at drawing from a technical point of view, and I still can’t do portraits. But I was determined to communicate ideas. So, I practiced drawing architecture using tools such as lines, squares, and curves, while observing people who drew better than me. I eventually improved my skills and developed my own style.

“I’m not a theorist; I observe reality” Although they use graphics similar to comic art and are permeated with an unconventional and provocative pop culture, Cook insists that his drawings don’t represent utopian architecture but potentially feasible projects, as demonstrated by the Kunsthaus Graz. Designed with Colin Fournier and nicknamed the “Friendly Alien” by the two, the Graz Museum of Contemporary Art was built in the early 2000s. This iconic blue building is remarkable for its organic forms and its BIX light and media façade.

>>> Read an extract from the article on the Kunsthaus Graz, published in an early issue of THE PLAN

I teach and write books but I’m not a theorist: I like to draw and make things. My approach isn’t based on a philosophy but on observing reality. I believe architecture is an experience: to design something, it’s important to see many examples of architecture and analyze them with a critical eye.

The concrete and the theatrical I’m part of the generation that belongs to the functionalist tradition: organizing spaces is the priority, and then you have to create the magic. Architecture is like theater where you can experience surprising things: an unexpected object, a surface that goes from opaque to translucent to glass – a rebellion against what I call “the tyranny of windows.” Things reveal or hide themselves, as we get closer and get to know them.

Sir Peter’s design approach is therefore an unusual mix of pragmatism and imagination, the concrete and the theatrical. As he says, still today, just as much as back in the days of Archigram, he’s always busy, with pencil and ruler in hand, “advancing the state of the art.” 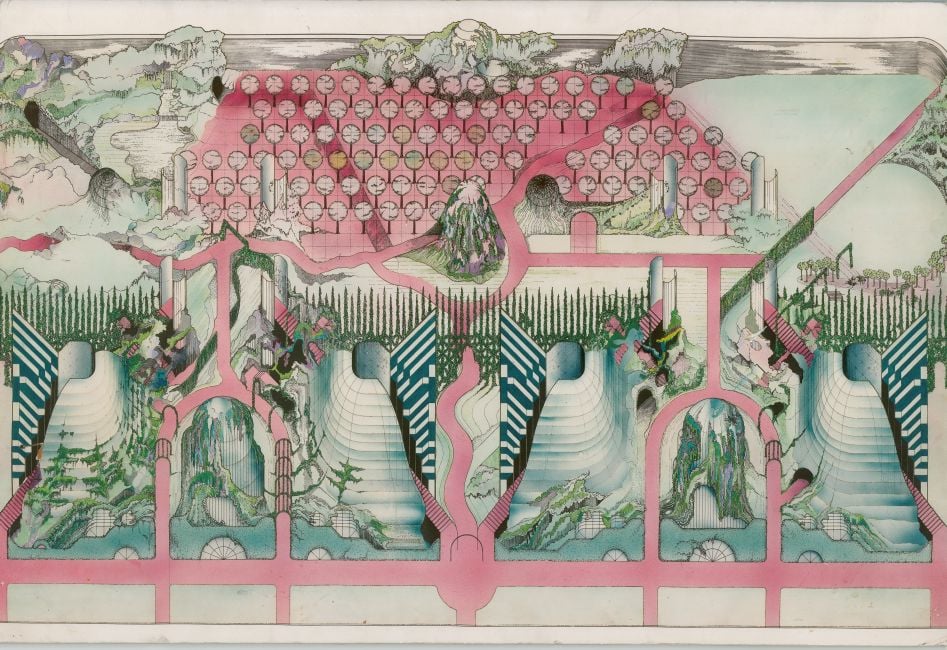