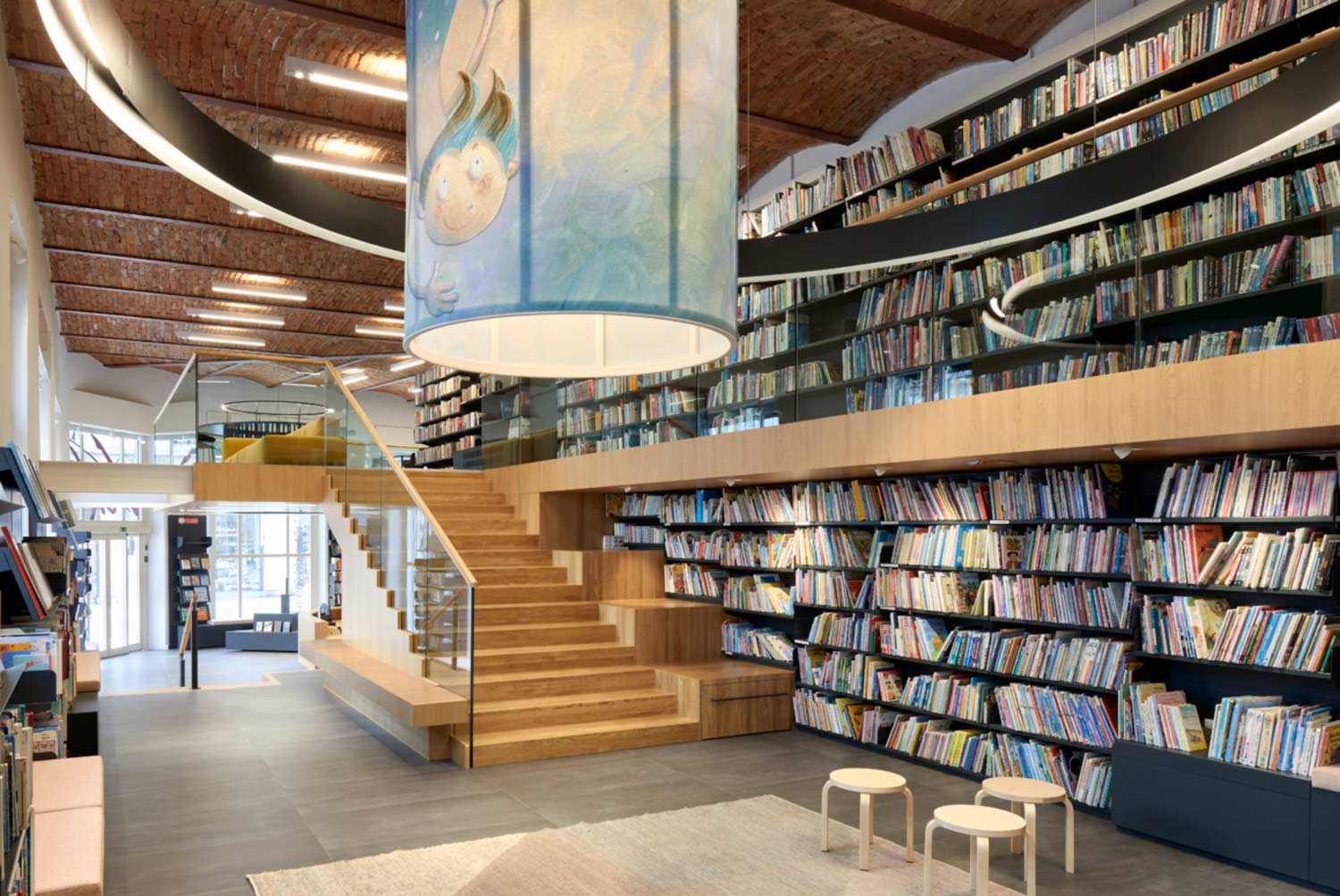 Half Slavic, half Italian: Gorizia is an intriguing city. You don’t often read about it in the papers or hear about it when people tell you their travel stories, but Gorizia has a charm that’s all its own. And for some months now, its old center has been attracting more attention than usual. The reason is the new Narodna in Študijska Knjižnica (National Library of Slovenian Studies), designed by waltritsch a + u and dedicated to Slovenian writer Damir Feigel. With its large windows overlooking public gardens and grand oval staircase that welcomes visitors, the NŠK is perfectly framed by its urban setting.

In this article, we’re focusing on both the story behind this marvelous piece of architecture as well as the Trgovski Dom, the multifunctional building that houses it. Steeped in Central European charm, the Trgovski Dom is also home to a restaurant, gym, stores, a bank, a theater, a center for meetings, professional offices, the offices of various associations, and apartments.

The new NŠK library with views over Gorizia Located in the Trgovski Dom building and designed by waltritsch a + u, the new NŠK library has its origins in a building designed by architect Max Fabiani in 1905 in Gorizia. Fabiani, one of the foremost Central European architects and urban planners of his day, collaborated with Otto Wagner on the master plan for the reconstruction of Ljubljana, Slovenia’s capital, after it was destroyed in an 1895 earthquake. They later did the same for Bielitz – today’s Bielsko-Biala – in Poland. One of the most striking features of Fabiani’s approach to the art of building design was his ability to blend tradition and innovation. He brought this with him to his work as an urban planner, with designs marked by their deep roots in the “culture of the city.”

At the beginning of the twentieth century, Fabiani was living in Gorizia. At the time, the city was undergoing intense urban development and was mainly thought of as a tourist destination and a place to “take the cures.” This earned it the name the “Austrian Nice.” And this name wasn’t just a slogan, since it reflected the then local government’s plans to get the city recognized for its friendly people, fine avenues, large parks, and pleasant walks. The opening of the Corso in 1866, named after Emperor Francesco Giuseppe, was one of the outcomes of the government’s work. This project marked the beginning of Gorizia’s new urban layout, encouraging the new city to grow at a distance from the ancient one, nestled at the foot of the castle. Located between Corso Francesco Giuseppe and the public gardens, the Trgovski Dom stands in the center of this new setting. The building was originally the headquarters of the Trgovska Obrtna Zadruga (Industrial commercial bank) and the Slovenian community center in Gorizia. The building permit carries the date May 23, 1903, with modifications carried out to the façade during the executive phase in July 1904, with the addition of the round turret in one corner. The work was completed in June 1905. The plans were signed by architect Max Fabiani, while project management was entrusted to his pupil Josip Costaperaria. More than just repositories of knowledge, today libraries are meeting places for learning and cultural exchange. They’re institutions able to stimulate contact between people while offering them culture and learning. Along with providing access to books, their offerings of different activities for the intellectual growth of communities are central. Libraries are places that, as well as stimulating a love of learning and culture, promote social cohesion, ethical behavior, and a sense of community, while also being committed to the new generations. Libraries today, therefore, often present themselves as places for interaction that invite people inside and then help bring them closer together.

We looked at the new face of libraries in this article dedicated to some of the most beautiful examples from around the world, including the libraries in Kirkkonumi, winner of the Finish Prize for Architecture in 2021; the Matsubara Civic Library, located in Osaka and surrounded by water; and the well-known Bibliotheater near Shanghai, a library-theater in the shape of a blue whale.

Windows as a medium for dialogue with a city The new NŠK occupies part of the street level and basement of the building. The rooms at street level were opened by eliminating several walls. A mezzanine level was also added, set back from the façade so as not to interfere with the fenestration. These large windows are an effective medium for creating dialogue between the library and the ongoing daily life of the surrounding city. The building of the mezzanine, made possible by the exceptional internal height of the rooms on the ground floor (16’/545 cm), was in response to the library’s brief for more spaces and for them to be differentiated from one another. Located above the main entrance on the corner of Corso Verdi and Via Petrarca, the mezzanine floor has a round 79-inch (2 m) hole that lightens the appearance of the space, while simultaneously drawing attention to the vaulted brick ceiling, uncovered by the recent work. The presence of this circular shape is also intended to be a reference to the round corner turret in one corner of the building, which is clearly visible as you enter via the door on the corner between the two streets. In fact, along with the large windows on the ground floor, the turret is the most distinguishing element of the Trgovski Dom building.

The project also involved the renovation of rooms at basement level, which will be used for storage. This involved the demolition of some more recent additions to restore the original layout of the area now occupied by a fencing gym.

While the work exclusively concerns the interior of the building, the architects have set out to underscore its two most important characteristics. On the one hand, opening a single interior space improves the communication between inside and out – something the rooms already had, thanks to the imposing thirteen-foot (395 cm) high windows. The round circular hole in the mezzanine floor is also a comment on the architecture of the building, underscoring the importance of the striking corner tower designed by Fabiani. 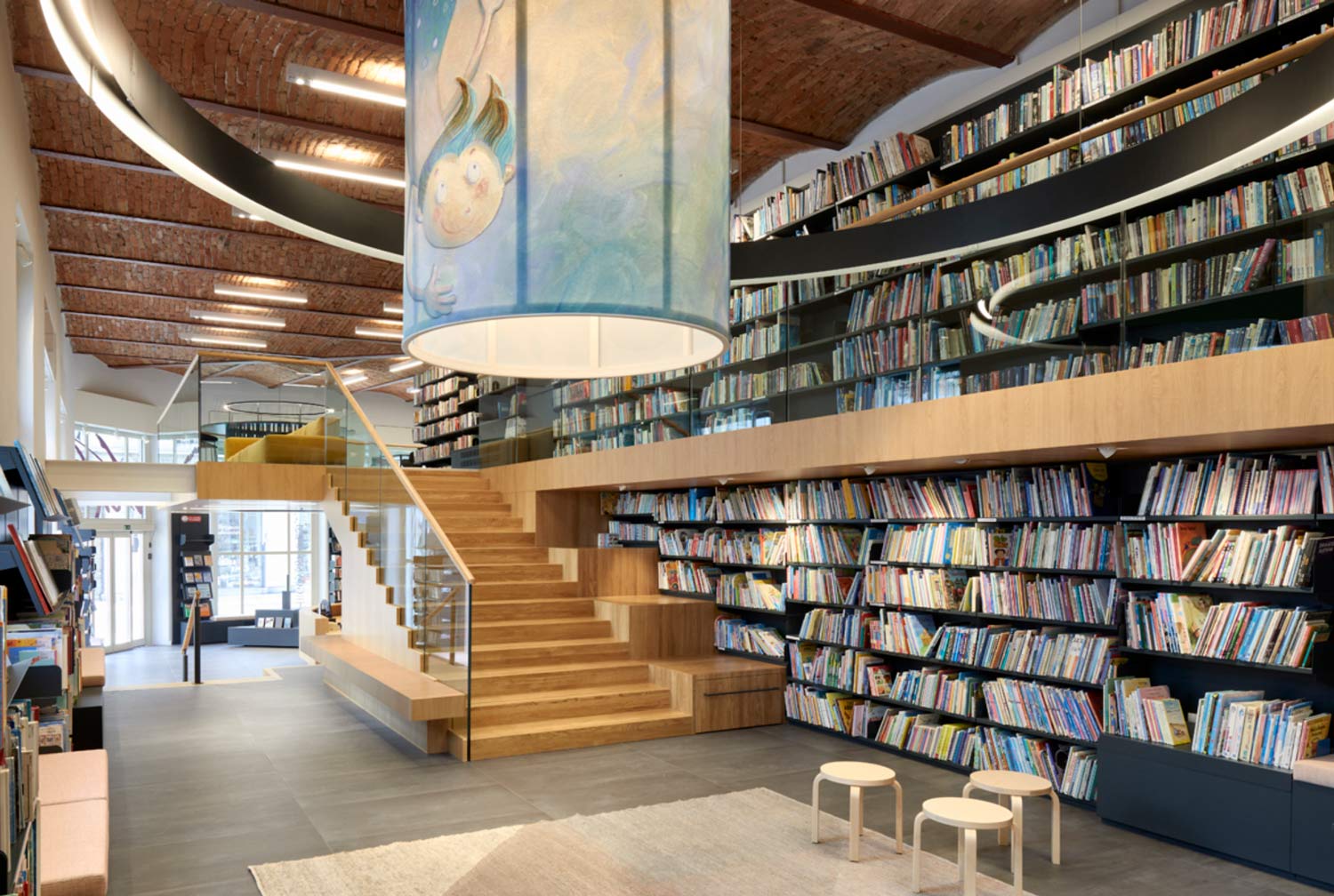 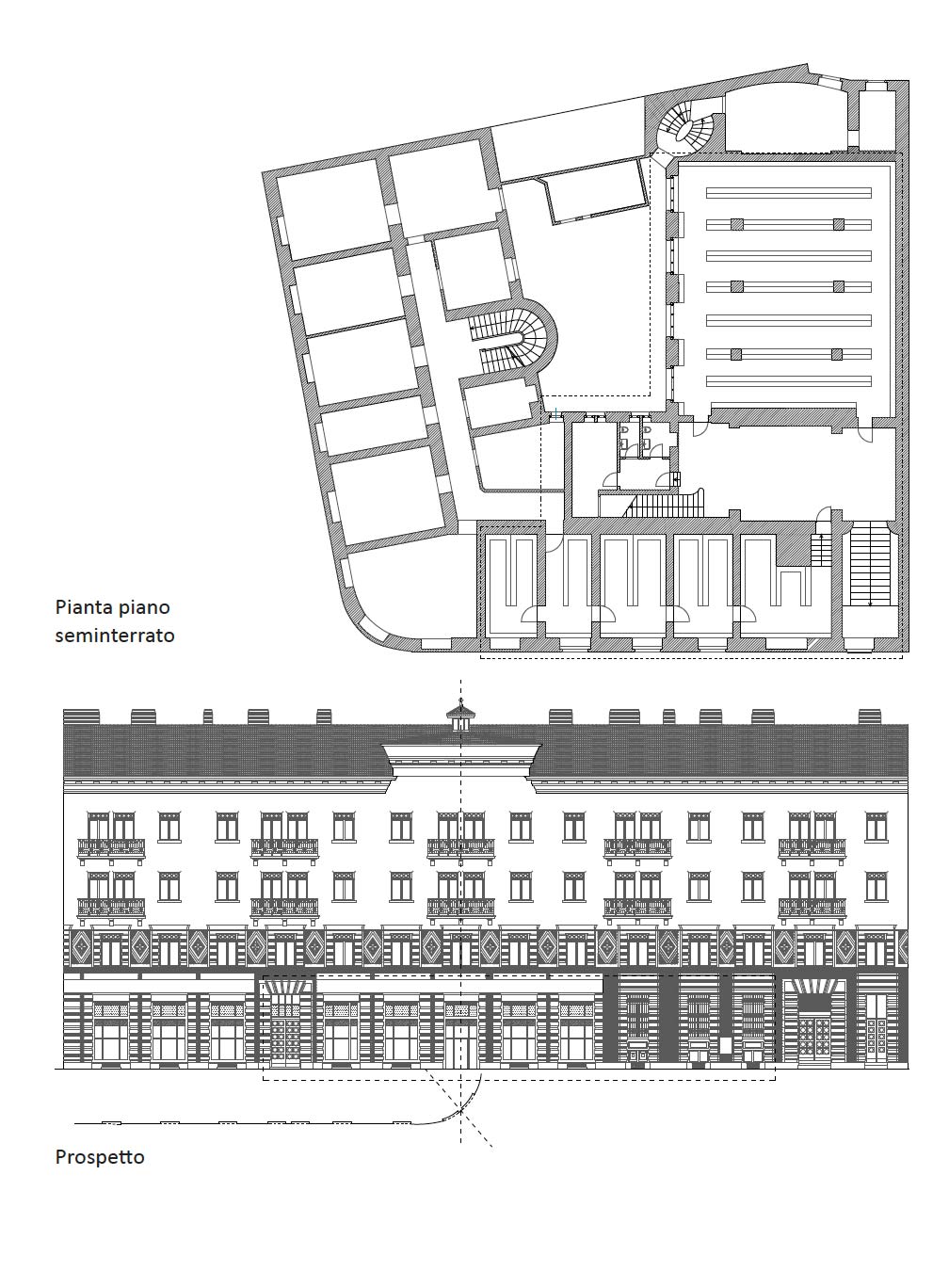 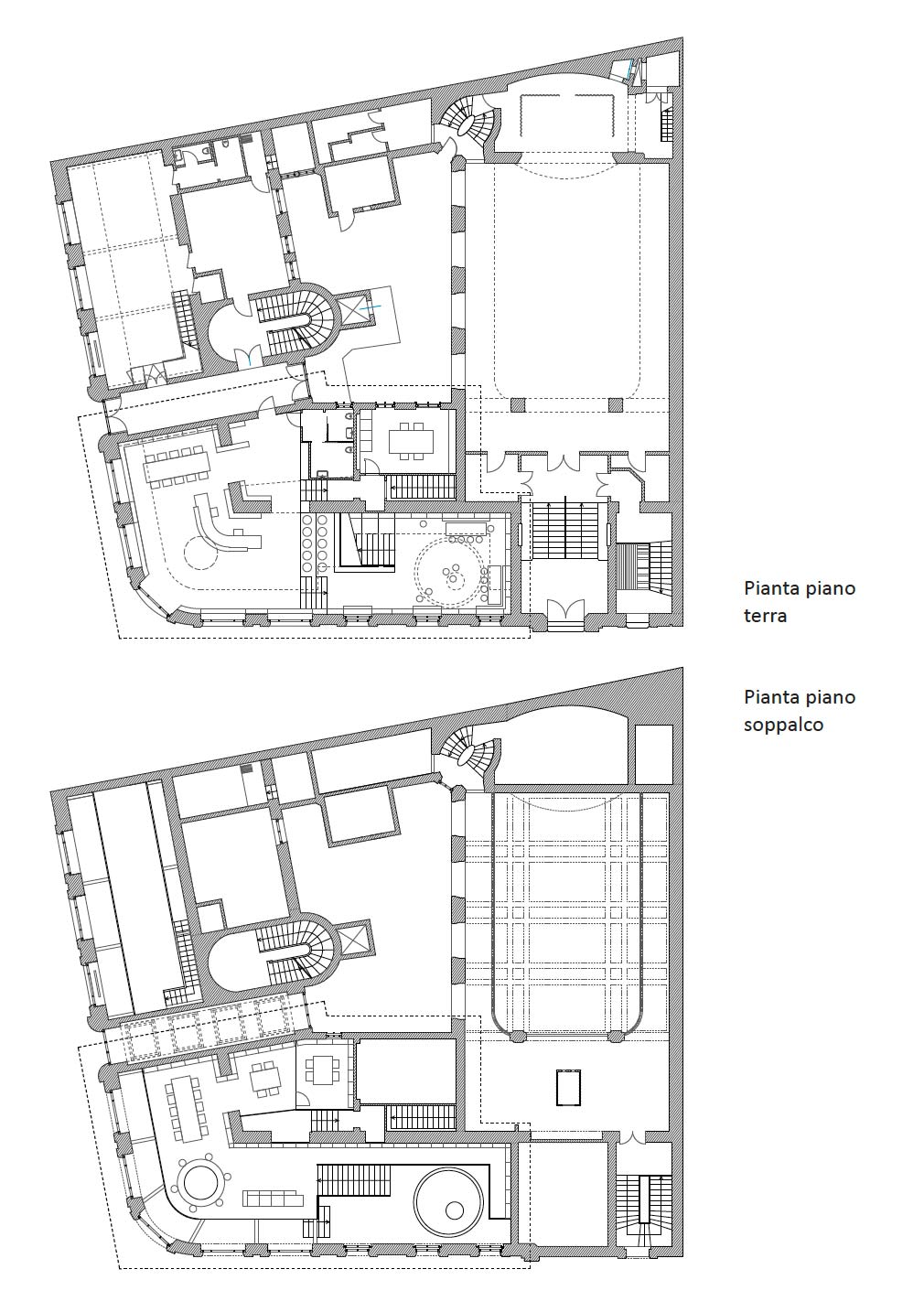 The only (amazing) library originally designed by Mies van der Rohe, now also has a rooftop terrace open to the public. Here's the new design of the M... 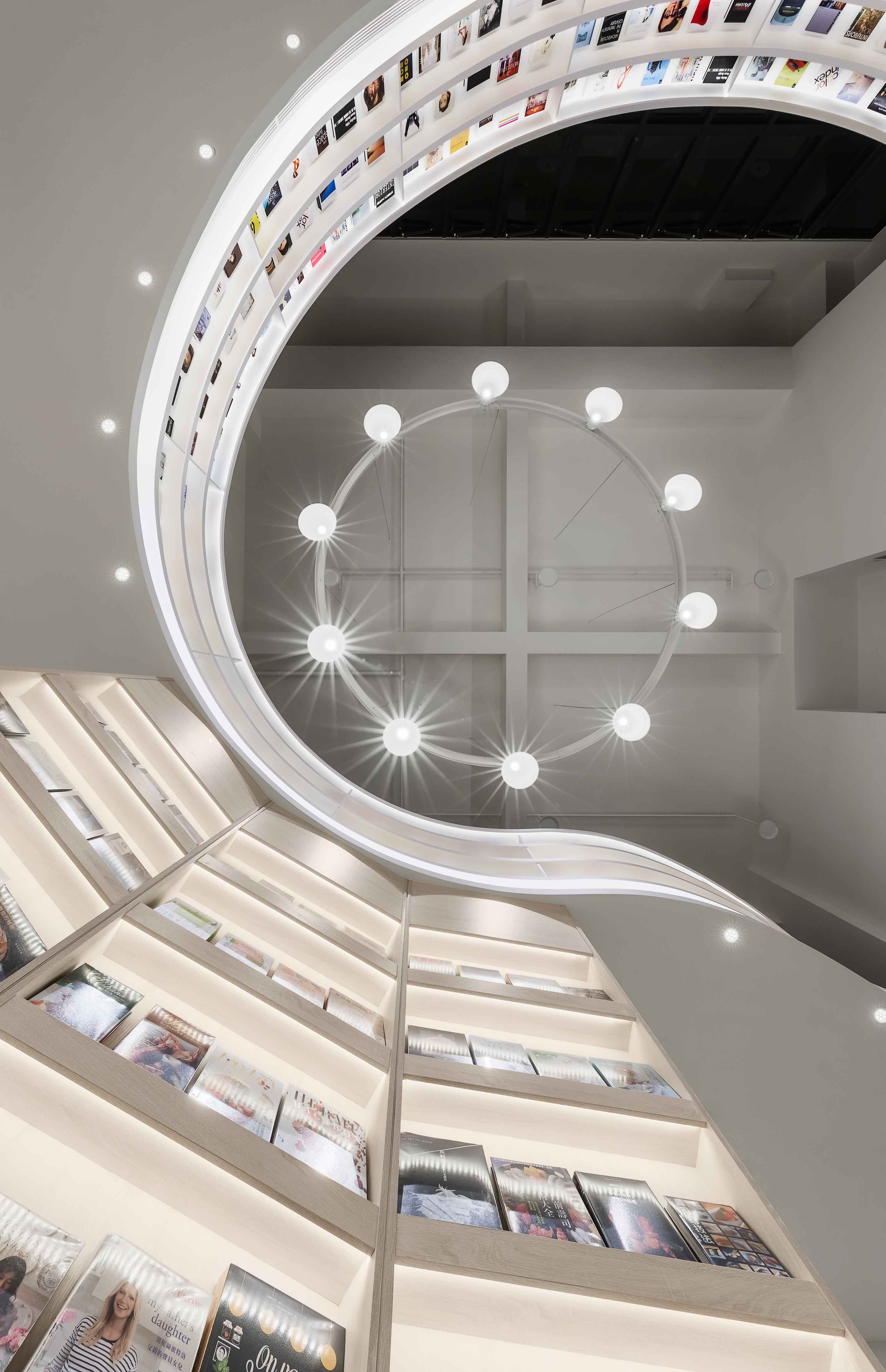