We hereby confirm that Maggioli S.p.a., in its capacity as Data Controller pursuant to the European General Data Protection Regulation UE 2016/679 GDPR,processes your personal data in order to allow you to participate in the initiative, and also to enable us subsequently to contact you in order to provide didactic material and eventual attendance certificates. The personal data collected may be used in the future by the Data Controller to inform data subjects of other similar initiatives and update them on conferences and training events. While optional, the submission of personal data is indispensable in order for us to perform the services indicated. All personal data shall be processed using the appropriate hard-copy, computer or IT-enabled tools by specifically trained personnel as laid down by the GDPR, and may be communicated to public bodies or persons acting in a public capacity in compliance with current legal requirements, as well as to private bodies or persons to allow the data processing required to perform the services offered. Such bodies or persons include our network of sales agents, factoring companies, banks and financial institutions, credit recovery companies, credit insurance companies, commercial information companies, professionals and consultants, and transport sector companies. Maggioli S.p.a. is hereby authorized by you to communicate personal data to supervisory bodies, or entities entitled to access personal data for tax or administrative purposes, or in order to issue professional certifications, etc. Personal data may also be communicated to the companies of the Maggioli Group for the same data collection purposes and may be processed by specifically authorized employees and/or collaborators of the Group, including persons operating in the capacity of Data Processors, as well as independent Data Controllers working in the following business sectors: data centers; internet services, electronic publishing, mailing, marketing, trade shows and conferences, mailing, telesales, order handling departments, customer service, and administration. The personal data collected shall not be disseminated or ceded to third parties but may be communicated to companies, bodies or other entitles attending the event as partners, guests, sponsors or exhibitors for promotion purposes or in order to ensure the efficient organization of the event. Your personal data shall not be transferred outside the European Union. The period of the processing shall be limited to the time required to provide the services requested. The period of document storage shall be that set down by tax, administrative and legal requirements. The electronic mail addresses listed on the attendance form shall be stored and used only for the purpose of sending communications regarding similar activities, until such time as the data subject requests cancellation of said e-mail(s). Data subjects may at any time exercise their rights vis-à-vis the Data Controller pursuant to Articles 15 to 22 of the Regulation and applicable provisions of domestic law. In particular, data subjects may access their data and receive confirmation as to the existence or otherwise of their personal data, even if such data have not yet been registered, and receive communication of said data in an intelligible form. Data subjects may also request information regarding: the origin of the personal data, the purposes for and means by which such data have been processed, the criteria applied in the case of electronic data processing, details regarding the identity of the Data Controller, the Data Processors and the designated representative in accordance with Article 5, para. 2, as well as the recipients or categories of recipients who may receive the personal data or who may become cognizant of such personal data in their capacity as designated representative for the country, Data Processors, or mandated persons. Data subjects are also entitled to: update and obtain the portability, erasure, limitation, transformation into anonymous form or blocking of their processed personal data; receive proof that the above-mentioned operations have been made known to all those to whom their personal data have been communicated, with the exception of those cases in which this proves impossible or would require manifestly disproportionate means compared to the right being safeguarded; oppose, for legitimate reasons, the processing of all or part of their personal data even if related to data collection and the processing of personal data for advertising, direct sales and commercial communication purposes, or to conduct market research. Data subjects also have the right to lodge a complaint with a supervisory authority, which in Italy is the “Garante per la protezione dei dati personali”. Data subjects also have the right at any time to withdraw their consent to the processing of their personal data, oppose such processing and request information from the Privacy Office of the Data Controller, Maggoli S.p.a., headquartered in Vai Del Carpino, no. 8 in Santarcangelo di Romagna (Rn), Italy, or by e-mail to [email protected]; pec: dpo.privac[email protected]

Exhibition on the Site Le Corbusier in Firminy Our exhibition takes place at the Le Corbusier Site in Firminy, France, from mid-June 2021 to mid-January 2022. It will introduce the Biennale Internationale Design Saint-Étienne 2022, whose main theme is “Bifurcations”, which might strike you as prophetic, given the 2020 we have just been through.
Bifurcations is an opportunity to look at the roads open to us and choose where we want to go. It is an opportunity to change path: explore, experiment, and change.
So what roads are open to us?
The Le Corbusier site wanted to put the accent on architecture, and invited us to put together a monographic exhibition of our practice and work. We are going to take over the church of Saint-Pierre in Firminy to present a selection of seven key projects, each examining the evolution of the city and its environmental challenges, such as the use of precious public space and the purpose of architecture.
Architecture reflects a past, a culture and a view of the future. It weaves a story made up of successive bifurcations, guiding man and structuring his memory.
We have chosen three of the many possible bifurcations and exploratory paths that in our opinion are fundamental and guide the work of our practice, becoming one of the common threads running through our exhibition:
The question of public space (theme: The Gift of Public Space), at a time when cities under increasing real-estate pressure, tending to densify and privatize. Yet all European towns - to cite only these - are crafted from and around the public space that accompanied their birth, and which from time immemorial has been the bedrock of our sociability, our relations and our shared lives. The Roman forum still has its place today. The question of uses (theme: The Program Laboratory), at a key time when each of us is questioning how we live, work, move around, and our more-or-less defunct relationship with nature.
How can architecture respond to these questions; how can it meet and anticipate our new needs? Finally, the question of the meaning of architecture versus that of its environmental impact (theme: Urban Markers). How can our architecture ensure minimum environmental impact, treating our planet with respect, even in terms of remediation, but at the same time convey meaning, emotion through architecture and enhancing each site? How can human activity and its footprint be effaced while ensuring that our cities are not, in the words of Victor Hugo, merely ant nests?

The Site Le Corbusier in Firminy
The Site Le Corbusier is a national public entity. It is the largest site in Europe in terms of the number and surface area of buildings by Le Corbusier, some of which Unesco World Heritage sites.
Our exhibition will be held in this exceptional setting in the church of Saint-Pierre, a double construction, the church sitting on top of exhibition and meditation spaces.
The power of this magical place is intimidating. The exhibition spaces lead to a circular promenade skirting the four façades before going below grade to form a series of amphitheaters running from one room to another. Cinema to Explain Architecture
This series of tiered seating has a powerful effect on the space, literally setting it in motion. The route continually oscillates between the upper walkway and lower seating, between windows onto the landscape and spaces dug out of the ground.
Each room with its tiered seats will serve not only as an exhibition space, but also as a cinema. Each will show a film shot in the building and exhibited in that room. We commissioned a young filmmaker to make a mini-series, each episode telling a (fictitious) story set in one of our five buildings.
Architecture is felt through motion. It must be explored and experienced to be understood. An integral part of the exhibition, cinema inhabits the exhibition spaces, casting a particular light on our projects.
Filmmakers and architects are both creators of spaces. Cities are represented in film, just as film is a representation of the city.
They dialogue and complete one another.
The quality of a work of film depends, among other things, on its capacity to thrive on, respect and enhance the space through which it moves. It records the spatial quality of architecture and - on a broader level - the city.
The quality of a piece of architecture also resides in its capacity to compose spaces that enhance our view of the city. Architecture accompanies the camera, suggesting movements, whispering frames, and marking out many of its dimensions. An Exhibition Design Made Entirely from Recycled Materials
An exhibition is an ephemeral moment in a place that often will remain after the exhibition. We are no longer in the dimension of the relative permanence of architecture, rather in that of a work created to last only a few months. We therefore decided to work using only recycled materials, giving them another life for the duration of the show. Once the exhibition is finished, they will again be recycled, in a kind of infinite lifecycle.
We then looked to Saint-Étienne’s fertile pool of craftsmanship and local companies to execute the exhibition design project. Materials and skilled labor are provided by two companies from the Rhône-Alpes region: Buitex and Marmonier.
Founded in the 19th century, Buitex has from the outset recycled materials giving them a second life, a highly innovative approach when started 100 years ago. The firm started by retrieving fabric discarded by Lyon’s silk manufacturers to use as heating fuel. Today, the company transforms what the planet uses most - jeans and plastic bottles - to make a material with multiple markets.
We chose this material for its absorbent properties, as we had to make Le Corbusier’s spaces more comfortable, countering the cold and reverberation of the raw concrete. The amphitheaters have been equipped with little seating pads, while the projection of films required softer and more absorbent sound quality.
Buitex supplied us with a very beautiful blueish material, which Marmonier then cut out to fashion small, made-to-measure rounded pads to cover the tiered seating and floors in the amphitheaters. As well as providing sitting comfort, they also act as sound dampeners. The Three Topics of the Exhibition 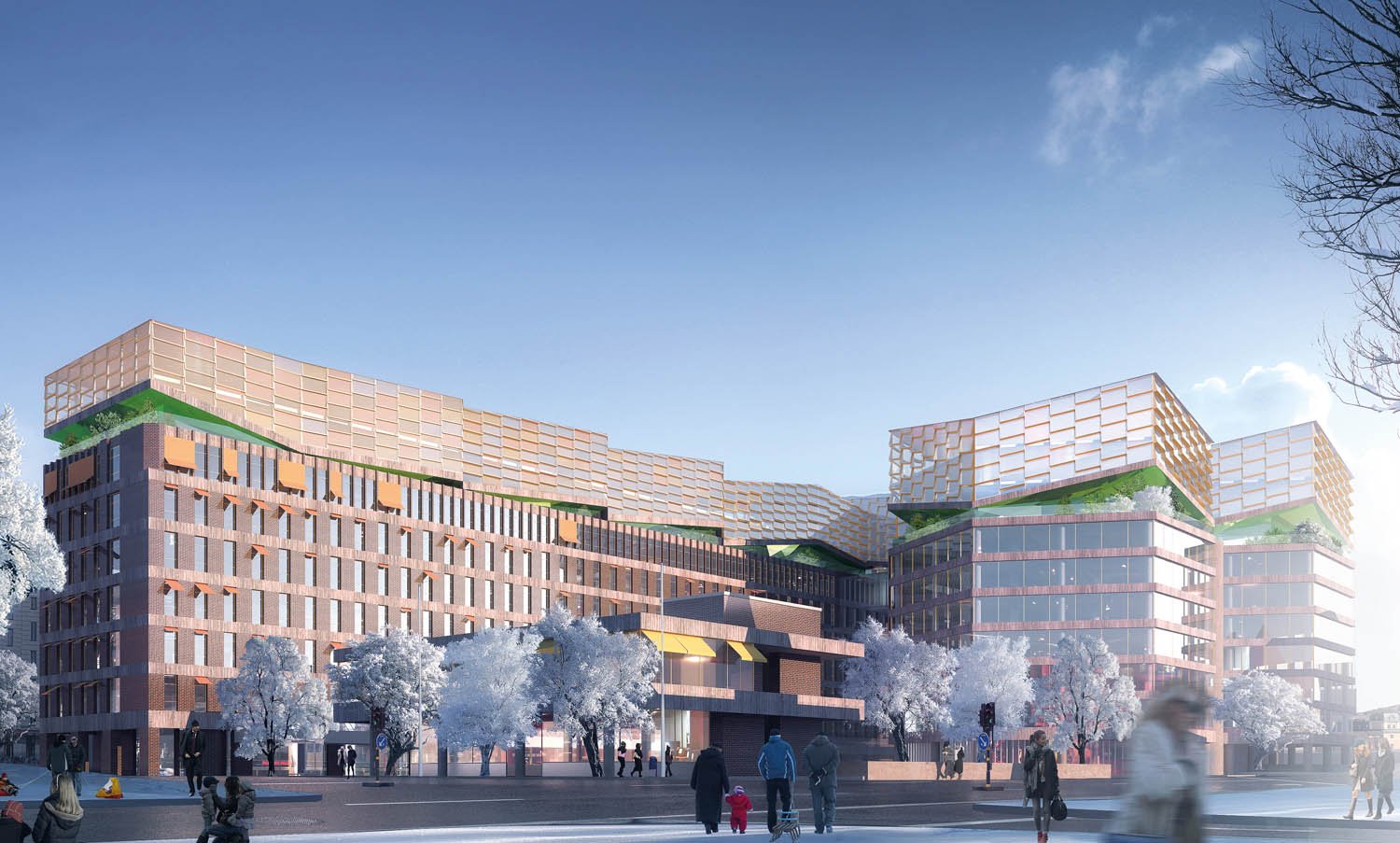 A Revision of the “Settlement Principle” The Yang Liping Center for Performing Arts by Studio Zhu-Pei creates a relationship with its setting. The project seeks to make material connections ... The 2021 masterplan for the revitalization of the Los Angeles River by Gehry Partners, Geosyntec Consultants and OLIN aims to restore the area by cre...