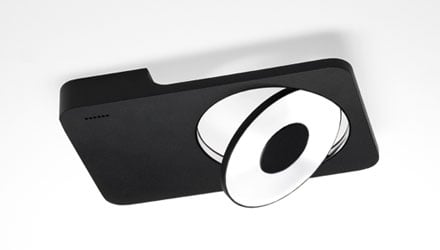 By Editorial Staff - 7 May 2010
Technology
The LED technology and the design are the result of years of research. With its revolutionary inner works, the LED disc which, thanks to its asymmetrical hinge joint, can be turned horizontally through 359° and vertically through -10/+45°, may turn out to be the first valid substitute for the familiar halogen spotlight.
Despite the Spock’s minimal height, all of the fixtures are hidden away invisibly. The thin LED housing, with a cross-section of barely 12.5 mm, contains 16 high-quality Cree LEDs, aligned flat towards the outer edge of the circumference so that they are concealed from the eye. Using a reflector and redirecting plate, the light is diverted and focused via a lens into a powerful beam with a beam angle of 32 or 56 degrees.
For the developers it was very important for the light disc to belong to the so-called “Exempt Group”: the highest safety class, which means that the eye (even with lengthy exposure) can never ever be damaged.
In other words, the LED disc satisfies the standards in this class in contrast to increasingly inexpensive models in stores that are not so strict with safety instructions and all of the associated consequences.
An advantage of the large surface of the disc enables optimum cooling for the LEDs, ensuring a long life of 50,000 hours. The LED engine is fitted with a built-in thermal sensor. When it exceeds a certain temperature under extreme conditions, the Spock is dimmed, so that durability is guaranteed even under exceptional circumstances.

Design
A technical revolution on the inside does not mean sacrificing the beauty of the outside. Quite the reverse. When it comes to design, Modular intends to stay far ahead of its time, now and in the future. Precisely because the LED disc redraws the borders of light, Modular’s R&D department went looking for a fitting that could take the ingenious disc to an even higher level. Along with the young creative duo Couvreur & Devos, the R&D lab came up with a minimalist cast aluminium fitting, finished with a tactile powder coating that accentuates its light technology. This striking but never obtrusive fitting will suit every interior environment, whether on the ceiling, the wall or trackmounted.
With its meticulous design, the Spock does not leave a single wire showing: neither on the rotating LED disk incorporated into an attractive, chrome-plated ring hinge, nor at the mains connection at the base of the fitting. The Spock shines through with an ingenious design refined to the last detail.

Flexibility
Should individual Spocks be positioned horizontally on a wall in a row, or preferably on the ceiling, with or without a track? Anything goes. This revolutionary comes in three versions, available in black or white: ‘foot’, ‘track’ and ‘wall’. Whatever type of installation is used, the base of the fitting is fixed close to the surface so that all elements are neatly concealed. In either white or black, any version of this light of the future looks good in either contemporary or classic surroundings and in a professional or home environment, as well as being ideal for either ambient or task lighting.
The Spock is available in two colour temperatures: a 3000-Kelvin (warm white) and a 4000-Kelvin (neutral white) model. The specifications of these two high-tech units thus also comply with modern lighting standards.

Eco-friendliness
The Spock is the first valid alternative on the market to energy-unfriendly halogen. It generates a luminous intensity up to 1000 lumens, which is comparable with the well-known classic halogen spot at between 50 and 75 watts. Where the familiar home or office light uses 75 watts, the Spock goes three times better with a maximum consumption of 22 watts, which can only benefit our environment and our energy bills. Due to rapid development it will even be possible to lower the LED disc’s consumption further in the future.
Where the traditional halogen spot gives up the ghost after 5,000 hours, the Spock goes on burning for no fewer than 50,000 hours (4,166 12-hour days). In other words, the Spock has the same luminous intensity as the earlier conventional halogen light, but delivers benefits for our planet and our wallets in terms of both consumption and longevity.