A tribute to artists in an historic venue redesign Head to the Porta Venezia area in Milan if you want to learn about the city’s thousand faces. As well as the splendors of early 20th-century Art Nouveau architecture and groves in the Montanelli gardens, the district combines all the ingredients that make this metropolis tick, coexist and cross-pollinate, from rainbow clubs to fashionable boutiques along Corso Venezia, international restaurants and of course bars, temples of the Milanese aperitif and happy hour.

This redesign of the historic Notorious Frank bar has found a style to keep pace with the city’s changes, embracing a clientele that has expanded over the years and diversified in background, age and culture. Architect Nick Maltese designed the interior with character and instant recognizability, conceiving a venue that can be reconfigured all day long, creating just the right mood for a casual lunch or an evening drink. Chic and informal in style, enlivened by artists and creatives you might expect to see in the Village or in Downtown Manhattan, the new Notorious Frank’s vibrant notes provide a warm welcome.

The design features two distinct macro-areas: the entrance, a small foyer to welcome customers with high tables for a quick drink, alongside the pride of the chef, a shellfish-tasting area; on the other side, a dinner-club for diners and to host private events.The interior design unfolds in an increasingly intense gradient of colors and finishes, crescendoing into a climax that runs all the way from the entrance hall to the largest room, its rhythm punctuated by segmental arches that pierce the space and lend the volumes depth, creating a theatrical backdrop for the following rooms.

Through an interplay of complementary rather than contrast hues, the color palette modulates between warm, soft hues and deep Prussian blues. Finishes enhance the rooms’ three-dimensionality, from big-patterned black-and-white wallpaper with naturalistic views designed by the architect to the geometrically patterned floor, 3D counter cladding and a large, perforated metal wall that acts as an ante-chamber to the final room. Material-heavy textures generate relief effects, from cement-finish stoneware wall tiles in pearl gray to exposed concrete, while the furniture is upholstered in
full-bodied cream, gray and midnight blue velvet. Nick Maltese’s lighting modulates the rooms’ character, highlighting unexpected details through sumptuous atmospheres redolent of musical productions from the last 50 years. Ultimately, the venue is a tribute to the many performing artists called Frank, leading lights on the international music scene like Frank Sinatra and Frank Zappa, their presence hovering in these spaces, enlivening this club that attracts people all day long, from lunch until late at night, meeting up with a friend, kicking back after work, knocking back a cocktail or striking up a chat at the bar. 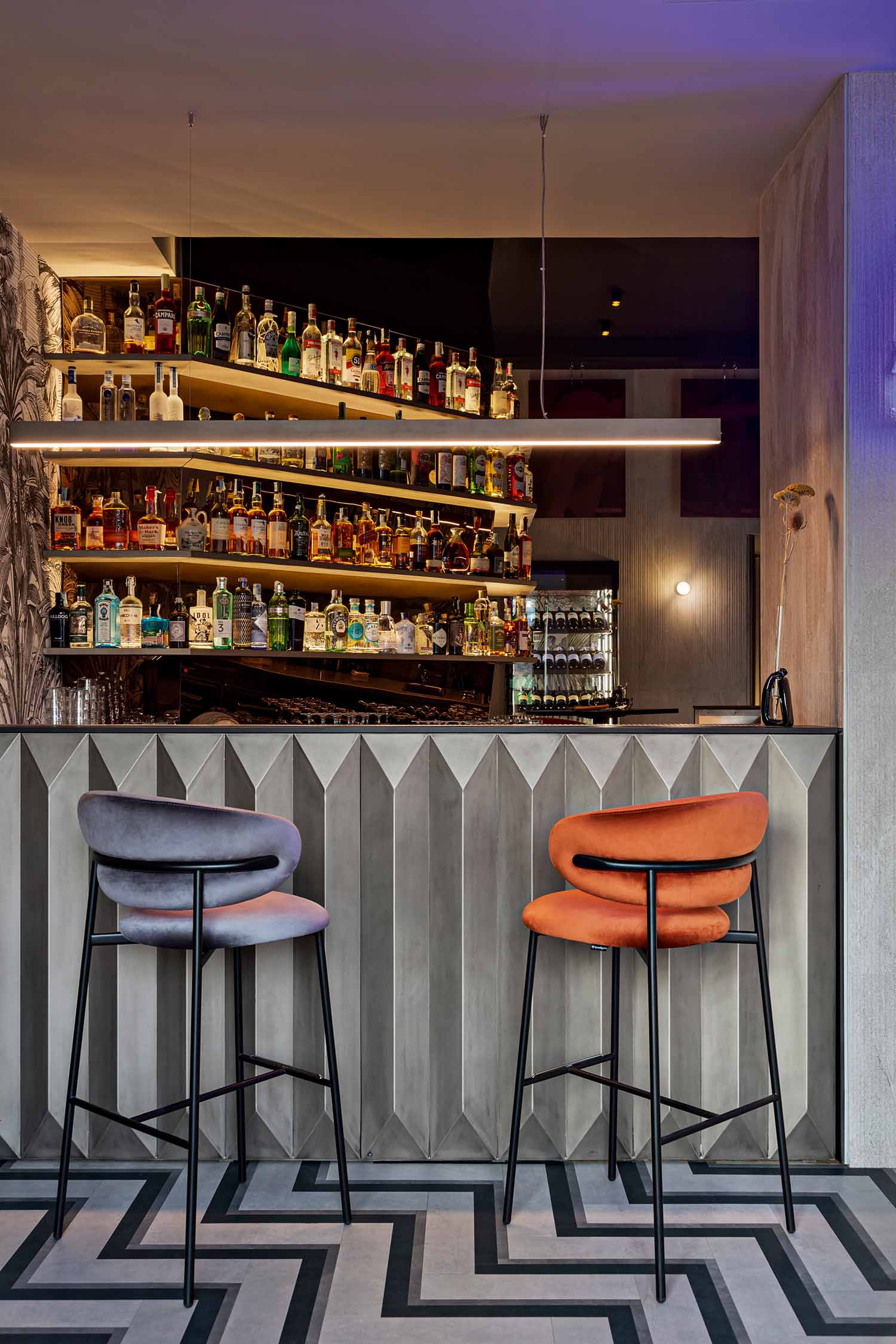 THE PLAN Contract 5 is the fifth special issue that THE PLAN is dedicating to contract furniture, a fascinating and complex sector that brings together mass production and customized spaces. Out in September with THE PLAN 140, the issue features over... Read More