Unique, Mysterious Designs to be Discovered Step by Step 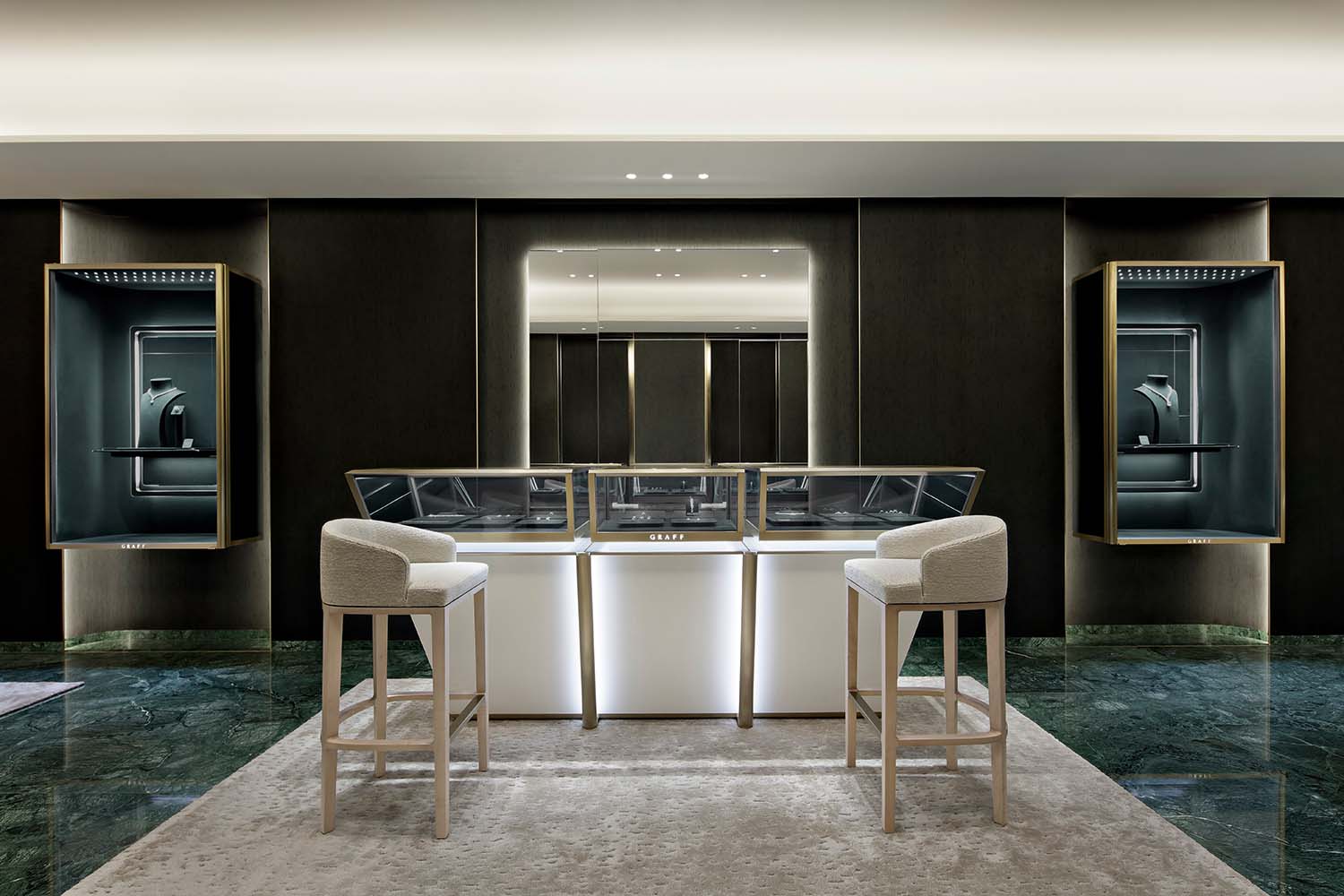 Shimmering behind a glass façade at the intersection of two streets in the heart of Tokyo’s high-fashion Ginza district, a ten-meter silver veil unfurls to illuminate the surrounding urban space, emphasizing the jewelry collection on display in the shop window of the Graff boutique, designed by the Curiosity practice. A passion for transparency and things that appear mysterious (only to turn out to be surprising) are the hallmark features of these spaces, created by French designer Gwenael Nicolas, who founded Curiosity in the Japanese capital in the late 1990s. Graff’s new flagship store, the tenth the London-based brand has opened in Japan, is among the studio’s most recent innovative retail concepts conceived to produce a personalized, exclusive shopping experience. Visitors immediately encounter a sophisticated, elegant atmosphere, defined by an interplay of soft lighting and a light color palette. A spiral wooden staircase leads to an upper level dominated by the color green, the brand’s signature color, reinterpreted here in polished stone floors and walls. The boutique unfolds in a sequence of rooms where Graff’s signature jewelry dialogues with handcrafted creations such as washi paper, made by leading-edge artisans in Wajue, and famous Hooso fabrics from Kyoto. Two works by Japanese artist Junko Mori feature in the store, along with a large screen with gold leaf decoration by Hakuichi, a master-craftsman from Kanazawa, and a bas-relief by French artist Jane Puylagarde.

Modern artworks feature at the Versace boutique in Rue Saint Honoré in the Medusa Arcade in Paris, where the star turn is a glass ceiling installation designed and inspired by the Italian fashion house’s baroque motif, triggering a series of reflections on the white veined gray marble surfaces that clad the retail space. Both stores demonstrate Curiosity’s design approach, based on redefining the boundaries between interior design, architecture and industrial design, working with new materials and products in synergy with clients and suppliers, starting with the idea that each project is like a perfume: a unique combination of fragrances to be discovered one after another.

The store Curiosity designed for streetwear brand Hipanda along Omotesando Avenue in Tokyo replaces refinement and luxury with a futuristic and technological concept: a veritable ghost house that melds the physical and digital worlds together, as visitors plunge into a new reality that breaks down cultural, age and gender barriers.

Curiosity expresses its creativity in projects beyond retail too. The studio’s portfolio spans other sectors like hospitality, for example the Sorano Hotel in the City of Tachikawa, not far from the Japanese capital. Adjacent to the Showa Kinen Park, the hotel expresses a wellness-led lifestyle not just through a variety of dedicated spa and swimming pool facilities, but in its interior design, with an iconic space connecting the entrance to a tent-like lobby that evokes a journey into nature, capturing the surrounding greenery as architecture.

Designing is creating a new reality

A glass ceiling installation inspired by Versace’s signature baroque motif is the standout element of the new Versace store in Paris at the Medusa Arcade. Starting with this strongly identifying, custom-made element, could you tell us a bit about how Curiosity works to redefine the boundaries between architecture, interior design and product design?

As well as architecture and interior design, Curiosity also does product design, so we are accustomed to looking after projects all the way down to the tiniest detail. At the beginning of every job, I consider how I might use that opportunity to design and experiment with something new: I wonder which vendor I might work with to create something I have not done before, because I am always looking to explore new technologies. Interior design largely consists of defining new elements. For the Versace store in Paris at the Medusa Arcade, I wanted to introduce a new chandelier concept. My design approach begins with an idea of how to overcome the traditional image of a chair, a door or a wall, things I redesign through a process of reinterpreting reality. I only fully understood the importance of ceilings as a design element thanks to fashion designer Domenico Dolce. When I first started designing boutiques for Dolce & Gabbana, I asked Dolce why he always featured a chandelier in every store. He replied that when he thought back to Sicilian villas he had visited, he always remembered the ceiling-mounted chandelier better than the actual house. So, for the Versace store I imagined taking a chandelier and expanding it across the ceiling, as always designing it as a custom product. The glass installation initially seems to be a minimalist design, but as you get closer, you grasp the complexity of its characterizing baroque motif. I develop my projects through a tension between two extremes, as a way of triggering an ongoing process of discovery.

The design concept for the Sorano Hotel in Tachikawa is all about a wellness-based lifestyle approach. How important is it for the design process to remain centered on people?

It is vitally important to design from the user’s point of view, i.e., the things people see, feel and remember about a place. I came up through the world of retail: when you walk past a store within a commercial space, the recognition factor has to be instant for you to be drawn in. Once inside, it takes ten seconds or so to realize, with a sense of surprise and wonder, what the space you imagined from the outside actually looks like. Then you move from this emotional moment to a more functional one, and you start discovering what products are on sale. The same goes for a hotel, whose spaces and services you explore one by one, in this case over a longer time span since you will be staying there for one night at least. So, the same place must be designed as a succession of time intervals: in a store, the process ceases after ten minutes, but in a hotel it can go on for as many as ten hours. You could say I do not actually design space; I design time.

Interplays of transparency, emotion-generating colors and attractive shapes lie at the heart of Curiosity’s design approach. Your design for the Opus Arisugawa Terrace & Residence complex in downtown Tokyo is particularly emblematic of this. Can you elaborate on how you worked on its hallmark features?

When I first arrived in Japan, my design development approach underwent a profound change: here, you start from what is happening at a certain time and in a certain place, and then you broaden out your view; in Europe, you do the reverse, you go from the global to the detailed. In the Japanese approach, the designer stands at the center and imagines creating a spiral around himself, starting with the choice of materials, moving on to the study of light, then to defining proportions, and so on. After that, you think about the scene the user happens upon when they enter the space; you leverage his memory store of traditional furniture items to surprise him with a new element he is not expecting, as if in a conjuring trick. Ninety percent of my design concept is based on people’s memories; the remaining ten percent is simply something different. I work by removing the expected image of a sofa or table, altering its shape, size and color. It is all about making a product emerge out of an idea that differs from the one in your own background, a bit like learning to use chopsticks instead of cutlery at the table. My goal is not to start a revolution but to trigger evolution in human beings: when I present a design idea to a client, I focus on its future development rather than its origin or inspiration.

The hallmark feature of the Graff flagship store in Tokyo is a glass façade traversed by a shimmering metallic veil that allows only a glimpse of the store, hiding and revealing it at the same time. What role does the relationship with outdoor space play in an interior design project?

I love anything that is mysterious, semi-transparent and lightweight. The metal mesh behind the Graff boutique window enlivens the façade by triggering reflections, almost like the reflections of light on water, interacting with passers-by. In a traditional sphere like luxury retail, it is a real challenge to come up with a design that encourages this kind of interaction. Here, it is as if the glass façade has vanished, leaving the external space in direct communication with the interior. Thanks to its metal structure, the elevation has an industrial look to it. It is also sophisticated, part of a balancing act that, as I see it, defines the essence of spaces dedicated to high-end retail.

The interiors of clothing brand Hipanda’s store in Omotesando, where augmented reality meets futuristic interior design, are totally different. Would you say that the concept of the phygital, a blend of physical and digital, is the future of retail design?

No, it is only the beginning. Usually, digital is a separate part of a design, but the spaces are not designed for the digital world; on the contrary, the space itself must be conceived with the digital in mind. That is what I tried to achieve at the Hipanda store: when you walk in, it is like plunging into a digital universe, within a space designed with just two colors – black and white – devoid of shadows, bounded by a mirrored floor and a ceiling criss-crossed with bands of light. As a result, what you see on the screens merges with the store’s spaces, making it impossible to distinguish the real from the digital, effectively creating a new dimension. The Hipanda design required a long process of research and experimentation. It is very challenging to design a space that does not yet exist. In fact, I would say half the projects I work on are research projects, things I develop in advance so that I am ready when the commission comes in, because otherwise I do not have sufficient time to dedicate to the creative process. It is up to the designer to come up with a new idea, one that is sustainable and ecological: that is the reason why the designer must accompany the client right from the start of a project. THE PLAN Contract 4 will be released in April 2022 as a supplement in THE PLAN 137. This fourth special issue of THE PLAN devoted to commercial interior design and architecture takes readers on a journey through the latest and most important Italian ... Read More