Our entrance pavilion sits at the entrance of Thana City, a 500 acres site, situated on the outskirt of Bangkok, Thailand, which consists of several residential developments; a golf and country club; a hotel; and a recently-built international school. The client wanted a new identity for Thana City and especially the entrance, and we, as designers, were given ‘free rein’. We conjured up an undulating and fluid design that lends itself to cast-in-place reinforced concrete. Concrete is massive and extremely heavy, and much of our energy was spent detailing and dimensioning the various parts of the concrete structure, so that the pavilion conveys qualities of lightness and fluidity, despite its massive weight of 1,300 tons. For instance, we specified all the outer edges of the concrete roof structure with a thickness of 150 mm. Being the closest to the visitor’s viewpoint, this outer edge is critical in establishing the first impression, and we wanted this outer edge to be as thin as possible. The concrete roof slab then tapers to 800 mm at the mid-point of the pavilion structure, which is robust, but hidden from view, so will not disrupt the visual lightness of the pavilion. Pavillion’s Base Design. We collaborated closely with the structural engineer (of the project) to develop a distinctive structural base to support the massive roof of the pavilion. The previous iteration of the base structure was a series of ‘off-the-shelf’ Y- shaped column suggested by the engineer. Because there was no correlation with the roof design, we decided to re-design the column ourselves. We understood that the engineer’s priority was to have a certain amount of cross-section surface area of the structural column. Eventually, we developed a tapering column, that is in line with the roof design, which also matched (or exceeded) the cross-section surface area of the previous Y-shaped column. To make the columns visually lighter, a series of holes puncture through each of the base columns, providing visual rhythm as one travels through the pavilion. An 'Illuminating Lantern' at night. Working together with a lighting designer, we created a distinct ambiance for the pavilion at night: an illuminated lantern effect. To create the lantern enclosure, the upper portions of the pavilion (one above in-coming traffic; one above out-going traffic) are enclosed with stainless steel perforated panels that emit light from within. The perforation size was important to us, as we wanted a high level of transparency, we, therefore, specified 50 mm circular perforations. But the client had concerns about the possibility of birds getting inside the enclosure, which may pose a problem from a maintenance perspective. We tactfully added a layer of ‘chicken wire’ behind the perforated stainless-steel panel to keep the birds out, while maintaining the 50 mm perforation for optimum transparency. With this high level of transparency on the lantern enclosure, one can see the underside of the concrete structure through the stainless panels, giving you a three-dimensional understanding of the pavilion structure. An additional linear LED fixture at the edge of the concrete roof accentuates the pavilion's undulating form. Reflective pool in front of the pavilion. We believe water can cleanse our spirit with its inherent meditative qualities. Situated right in front of the pavilion is a reflective pool made out of black granite. It measures 16 meters by 5 meters. The pool is an island that divides the in-coming and out-going traffic. The rounded ends of the pool are inspired by the curves of the pavilion. ‘Thana City’ graphics are designed to float right above the pool. The lighting of the pavilion and the graphics cast-off enticing reflections on the water surface, creating an entrance that beckons visitors with a serene sensibility. 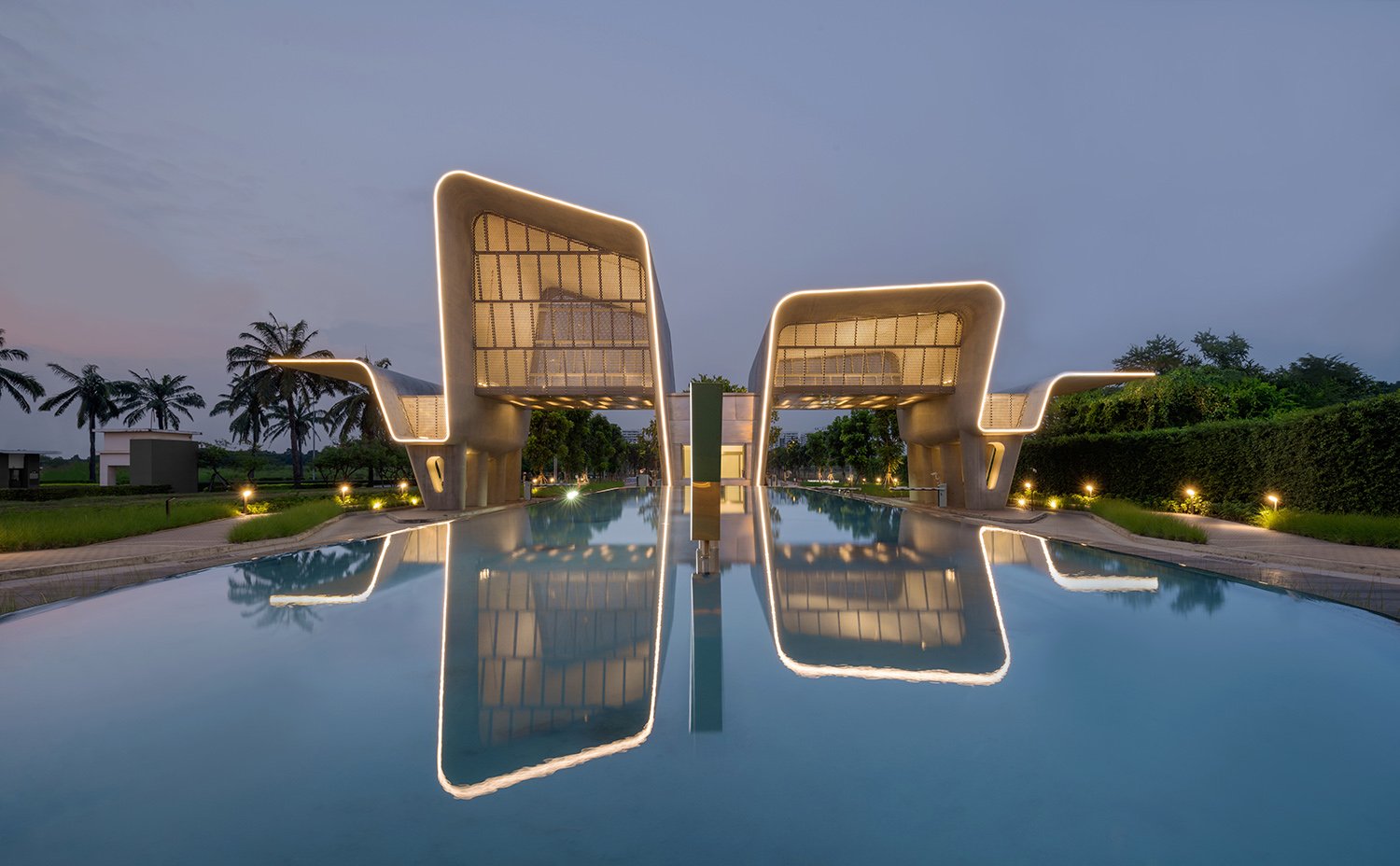 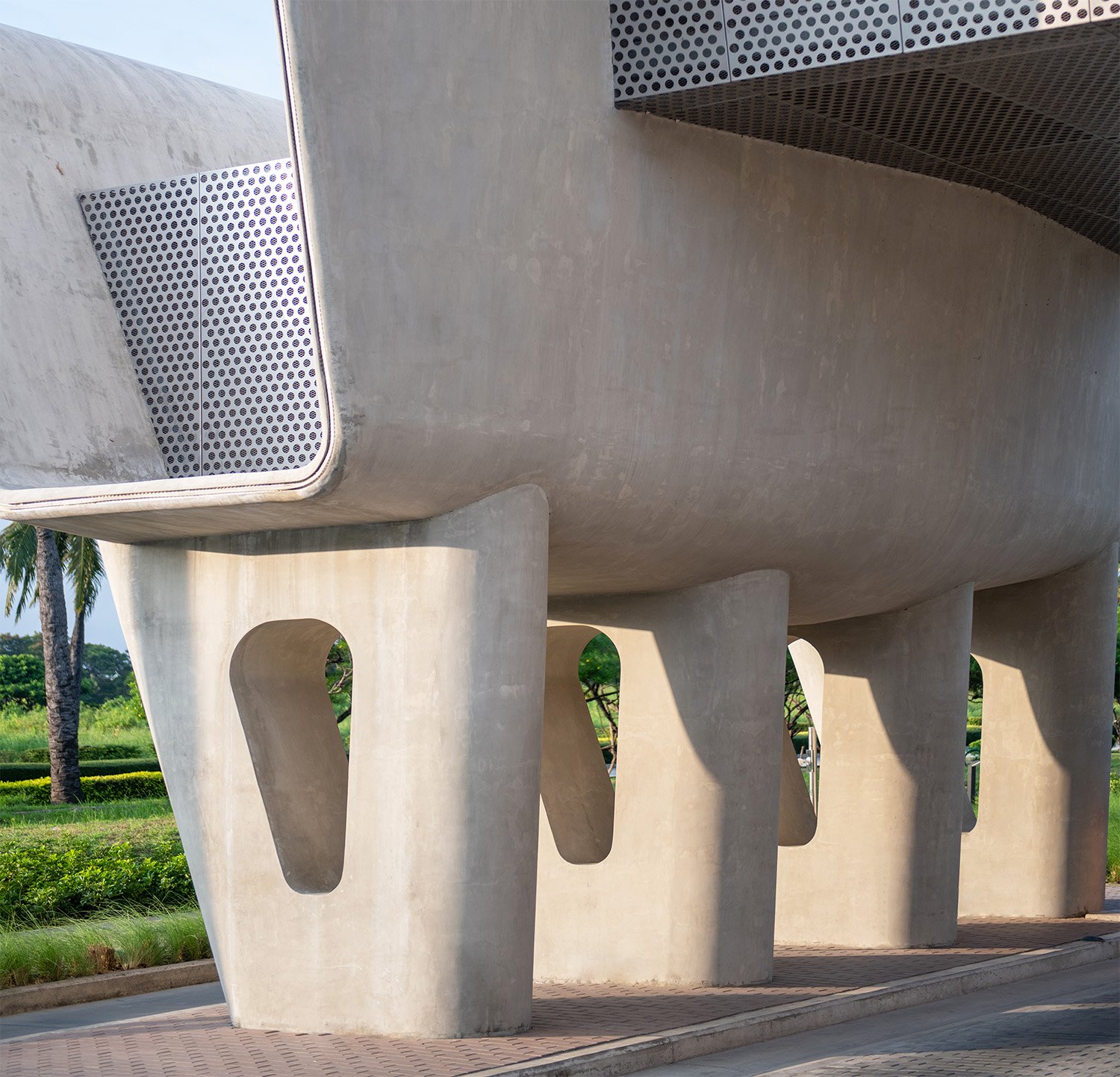 1:1 Limited is a small architectural design practice based in Hong Kong.
The practice was established in 2008.
For the first ten years, our practice focused on residential and commercial interior work. More recently (the past 6 years), we have been working on larger scale projects in Hong Kong and abroad: ‘Light and Span’, a manufacturing facility (6,750 sm) in Bataan, The Philippines; ‘Muse Edition’, a 2-level retail space (20,000 sf), in Tsim Sha Tsui, Hong Kong; and Entrance Pavilion, Thana City, Bangkok, Thailand, a 1,300-ton concrete structure, located at the entrance to Thana City, a 500-acre site with residential, recreational and hospitality facilities.

Gene Miao is the founder of 1:1 Limited.
He received his architectural training from The Rhode Island School of Design (RISD), Providence, RI, USA. He worked for Office dA in Boston; and Kohn Pedersen Fox Architects in New York, before returning to Hong Kong to establish 1:1 Limited.