The project was developed with idea that existing small hall of the Moraca Sports Center, which was originally designed as an indoor pool and for years out of function, change its purpose and to be reconstructed into a modern multifunctional sports hall (basketball, volleyball, handball, box). The Moraca Sports Center complex, consisting of large and small hall, was built in 1978. on the banks of the Moraca river in Podgorica, according to the project of the architect Predrag Dmitrovic and the construction done by Djordje Zlokovic and Rade Mrdak. The volume of the object forms a hyperbolic paraboloid on an elliptical base. The constructive concept is pre-stressed shell. The small hall is spatially leveled, so that the sub-tribune part of the building is subterrain and the hall itself is located on a lower platform towards the river. The challenge for the reconstruction of the building was to adapt the required contents to the existing specific form of the building, in a way that the original architecture is not disturbed, but at the same time to ensure the functioning of the facility for daily training of athletes, and optionally for holding national and European competitions. Also, a great challenge was to adapt the building to the modern conditions of fire protection, safety and evacuation of people from the facility, as well as improving energy efficiency. On the ground floor level are located ticket sales, main entrance hall for visitors, entrance for press and VIP users, with a VIP lounge and a box with 28 seats. Above the ground floor, a new cantilever gallery for press and cameras was designed. On the middle level (basement -1) are located VIP locker rooms, multifunctional hall (for exercise, cocktails, press events ect.), gym with a river view, sanitary facilities and auxilary spaces. At the lowest level (basement -2) are four locker rooms for competitions with toilets and showers, two locker rooms for judges, first aid, doping control, sports massage. New fixed east, south and west grandstands are designed on the ground floor of the hall to increase capacity. The northern existing grandstand has been reconstructed, and the seating capacity has been expanded with telescopic grandstands. Basketball, volleyball, handball and boxing courts have been designed, but the hall can also be used for various events such as concerts, fairs and so on. The original volume of the building represents a characteristic architectural language and a constructive achievement for sports facilities at the time in which it was created in ex-Yugoslavia. The idea of the reconstruction was to keep all valuable architectural elements, interpret them in a new way and improve them with modern solutions that will preserve its existence for many years to come. The modern needs of operator are to create more flexible hall with a smaller number of spectators, which can upgrade the contents of the large hall, or can be used separately for concerts, fairs, exhibitions and similar evens. Multifunctionality of the hall, justify economic value, because it is used for the most of the year for various purposes. For the local community itself, the facility, from a space that was abandoned for years, has again become part of everyday life, both through visits to various sporting events, and through daily use of accompanying commercial sports facilities (gym, fitness, etc.) Of particular interest is the gym and outdoor fitness, when during the summer months the plateau in front of the entrance to the ground floor opens up to the river, it is used for group training, due to the favorable position and pleasant air flow along the river. In the design process, a lot of attention was paid to make the facility accessible to people with disabilities and mobility difficulties. In the original project, due to the leveling of the hall to a lower platform, most of the spaces were inaccessible to people with disabilities. With the reconstruction of the building, there were added access ramps, elevators and lifting platform, so that most of the space became available to all the users, both for visitors and athletes with special needs. On the north stand there are eleven seats for people with special needs. In addition to all public toilets, also the toilets for people with special needs have been designed. All sports locker rooms have bathrooms for people with disabilities. Bemax arena within the Moraca Sports Center complex has 245 parking spaces provided, out of which 13 spaces are for people with disabilities and 5 spaces for buses. There are entrances provided for people with disabilities. All external walls and roof are thermally insulated with stone wool as a natural material. Facade openings have been replaced by energy-efficient aluminum profiles with thermal insulation, glass with three layers filled with argon. As the hall is mostly south-east oriented, horizontal blinds were designed as a new element of the architectural language on the facade. In the base zone of façade, the local stone from the Moraca River is applied, in order to additionally fit into the terrain and the surrounding context, but also as a homage to the architecture of the building in the immediate vicinity - Hotel Podgorica, a masterpiece by famous Montenegrin architect Svetlana Kane Radevic from 1967. Throughout entire facility, the most modern audio-visual communication systems and public address system have been designed. The sound system is JBL. The lighting is Philips controllable lighting with the Arena system, which in combination with the decorative RGB lighting of the façade gives a special experience. The parquet that is installed is of the highest quality under the Konnors System, the chairs are Daplast while the complete equipment in the hall is Shelde. The visual aspect is further enhanced by the modern traffic light system from the manufacturer Bodet. 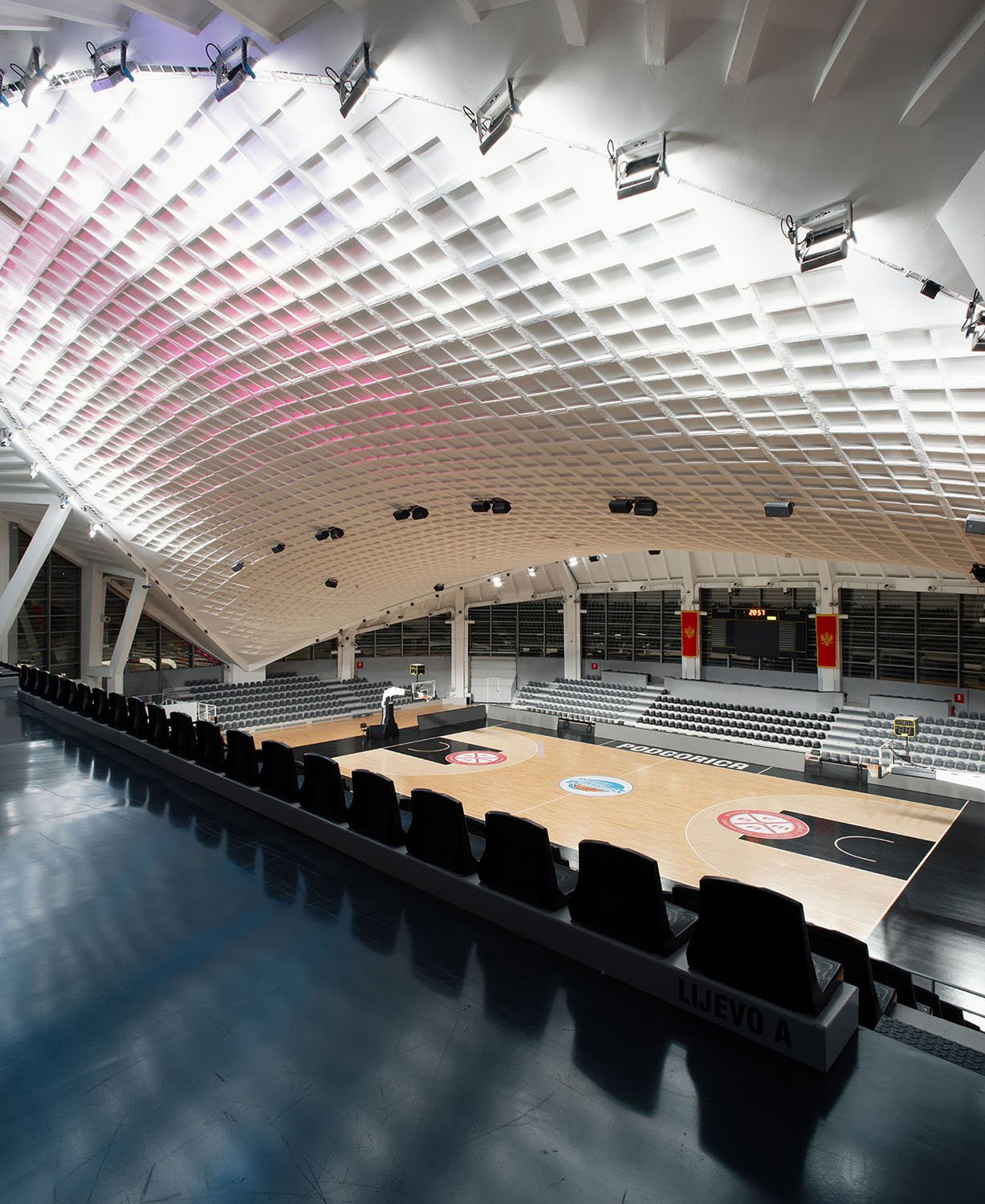 Architectural studio DBA was founded in 2007 in Novi Sad, Serbia, with the basic idea that as a platform for creating and managing projects through all phases, contributes the development of contemporary architectural scenes of the city in terms of form, expression and in a symbolic sense, as well as technically concrete and as contractor rational and effective.
The studio was founded and is now run by architect Djordje Bajilo (1978, Novi Sad). Professional engagement of practice operates in a wide range of design areas: architectural design, urban design, interior design, construction, project management, professional supervision over the execution of all types of works in construction as well as real estate development. Since 2009, DBA studio is member of IACS (International Association for the Design of Sports Facilities). DBA is proud of winning the IPC IAKS Distinction for Accessibility for Bemax Arena project in 2021. DBA studio consists of 40 engineers, mostly architects.