The Fondazione del Vittoriale degli Italiani was established immediately after the death of Gabriele D'Annunzio (also known as the Vate) to manage the building complex known as Vittoriale degli Italiani with its streets, gardens, and squares. The complex, donated by D’Annunzio to all the Italians, was declared a national monument in 1925. The compound extends over a large area, and it includes the Amphitheatre, called by D’Annunzio the “Parlagio”. The original idea of D’Annunzio together with the architect Maroni was to cover the seats using “Rosso Verona” marble. This material is the fil rouge driving guests across the park. After all, the red marble characterizes the whole landscape of Garda Lake. The historic archive of the Fondazione preserves many documents and drawings of Maroni, in which the architect detailed the Amphitheater structure and the cladding. From the drawings it emerges clearly the aim of Maroni to design functional and comfortable seats, with particular attention to their aesthetics. Unfortunately, the Amphitheatre was never completed as planned by D’Annunzio and Maroni, and, over time, many structural and architectural problems have emerged due to atmospheric agents and use. The seats appeared to be deteriorated, and the concrete presented signs of blistering in different areas of the “Parlagio”. Similarly, façades and columns resulted to be damaged. In order to face these emerging problems Fondazione del Vittoriale degli Italiani has undertaken a series of actions to restore the Amphitheatre following the original design. However, the restoring process was everything but simple, starting from the difficult interpretation and analysis of the original drawings. From the original schemes it emerged that the cladding was thought as cover for all the architectural elements. Indeed, it was designed for the columns that embrace the guests, for the seats, that were designed by Maroni in every detail, and for the orchestra level. Starting from the old design, the blocks’ section has been re-thought to emphasize the architecture quality. The final design results in a project that follows the original idea, improved by the application of modern technologies which, for example, allowed to realize every single element with millimetric precision. This precision was considered essential in such a context. All of this has been possible thanks to the knowledge of the modern industrial process of marble elements production, and through the cooperation with the artisans that produced the blocks. The design process, started from the study of the seats section, has been extended to the definition of the shape of the other blocks, used for the finishing of Portico and the Orchestra level. The metric survey on site allowed to model the blocks, leading to the definition of 153 different typologies on the total amount of 2148 “Rosso Verona” marble pieces. The aim of this process was to realize every element so that it could be placed as a jigsaw, in a perfect harmony with the next one, and all the other. As a result, the cladding becomes a unique finish as the Amphitheatre seems to be sculpted by a unique block of marble. In addition, thanks to the analysis of the historical records, the original white color of façades was restored. The objective of the project was to restore the site not betraying the original design idea inherited from D’Annunzio and Maroni and their concept for the “Parlagio”. The restoring of the purpose allows to maintain and to extend the functions of the Amphitheatre. In fact, thanks to the renewed design, today the “Parlagio” is not only a functional place to experience performances, but it has also gained a prominent position within the museum path, according to the original idea of its authors. 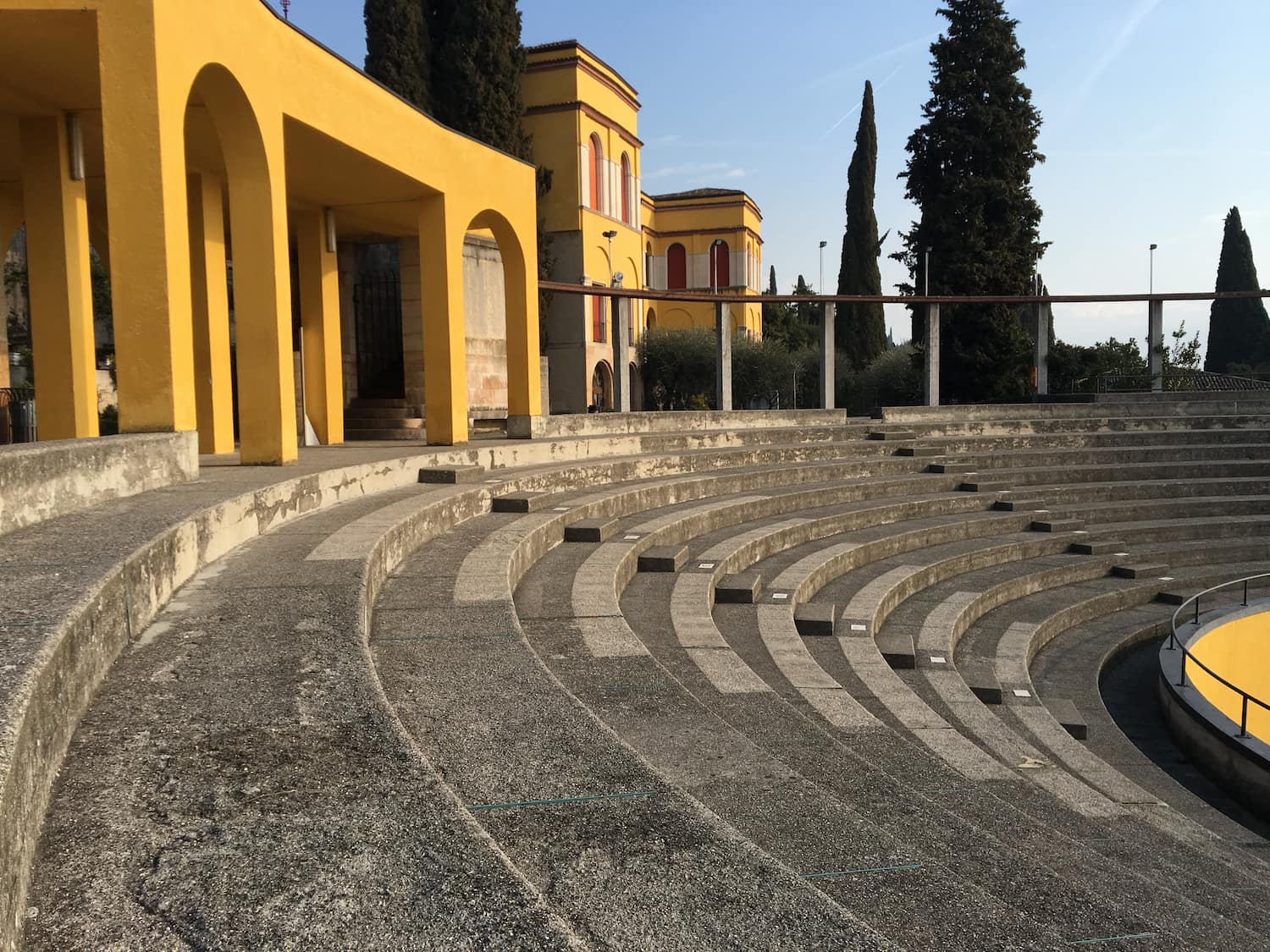 MI10Studio starts in 2017, by the partnership of Arch.-Ing. Antonino Mallamaci with Arch.-Light Designer Sarah Giuffrida. MI10Studio develops the desing in each scope: architecture, engineering and light design. The knowledge of the team ranges in every aspect of a project: from concept to final desing, throughout technological and structural design; interior design; urban planning; light design, both at urban scale and interior. In each part of the process the focus is on architectural quality, sustainability and energy savign. MI10Studio also provides consulting services about building management, operations management, and safety regulations. During years MI10Studio has stabilized many partnership both with private and public subjects.