Archaeological Mediterranean between waterfront and infrastructure The thesis project stems from the study of history and archeology in the Mediterranean Sea, characterized by the coexistence and clash between different peoples. The archaeological evidence represents the stratification of the history of the places and gives rise to the genius loci. Through the mapping of archaeological sites in the Mediterranean and the study of 11 cities of Phoenician foundation, the relationship between today's ports of Mediterranean cities and their archaeological areas was investigated, identifying two types of relationship between the ancient and contemporary city: intra and extra moenia. Starting from the aforementioned reading, the intervention area was defined: Marsala and Mozia, representing the two categories. Furthermore, their geographical proximity and the history between the two make them a unique system within the Mediterranean and western Sicily, and at the same time antinomian due to the location of the archaeological remains. The readings of the antinomic system of Marsala and Mozia were fundamental for the purposes of the intervention strategy and the definition of the project area, that is, the one between the limit of the coast and the infrastructures, such as airport, railway and port.

The basic elements of the strategy were the archaeological remains intra and extra moenia, the future electrification of the railway line, the urban cycle path on the Boeo seafront, and the geomorphology of the coastline. The strategy of intervention is based on five themes: limit, threshold, connection, double threshold and inclusion. The strategy starts from the infrastructural limit of the railway through the inclusion of new tram stations. The goal is to connect the infrastructures of the port of Marsala and the Trapani-Birgi airport with the railway line. The infrastructure is reconnected horizontally at the edge of the coast through pedestrian and cycle paths, which lead to limited interventions on the coast. The latter arise from the context in which they are placed and from the pre-existing active plans.

The project actions proposed on the coast are linked vertically to each other through the existing cycle path along the Stagnone. This has been integrated through the insertion of a new cycle path, which originates from the Marsala station up to Genna Salt flats along the coast, where possible. The closure of Marsala’s port at the behest of the Spaniards in 1575 led to the decline of activities related to the sea and the spread of viticulture. The city develops inland, putting an end to its relationship with the sea. The proposed interventions want to reconstruct the link between the city, in particular the historic center, the archaeological park, and the sea. The boundary of the Archaeological Park is the limit between the historic center, rich in archaeological remains in the open, and Capo Boeo, not allowing easy access to the coast by the community.

The design intent is to generate a connection network between the remains in the historic center, the Capo Boeo archaeological park, the sea, and the infrastructure of the future tramway and the port. The creation of the tram stop near the ancient Punic moat generates a connection between the infrastructure and the historic center through the creation of an urban park within it, from which a network of routes is created within the historic center. These lead to the intervention of the Boeo coast park. The settlement principle of park arises from the urban context of the city of Marsala. From the road axes adjacent to the coast, panoramic points are created overlooking the sea, in order to enhance the relationship with the sea, the landing place of the modern and ancient city of Lilibeo. Furthermore, the relationship with the sea is increased through the reduction of the current carriageway present at the Boeo promenade in favor of public space, by inserting an urban cycle path and expanding the pedestrian area.

The goal is to generate a new dimension of the city of Marsala through the connection between the historic center rich in archaeological remains and the waterfront. In Phoenician times, the island of Motya was connected to the mainland by a road that is now submerged, which led to the necropolis of Birgi. Today the island can be reached through the piers, located at the Ettore and Infersa salt flats. The project proposal provides for the insertion of two new tram stops: Saline Ettore-Infersa and Mozia, which are connected to the coast through cycle-pedestrian paths, and the creation of a pier necessary for the new route to the island of Motya. The temporary connection between the archaeological remains and the sea was born from the particular and unique context of Motya and from the ancient submerged road. New paths on water are generated by the following remains: submerged road, house of mosaics, barracks, Kothon, and tophet, connected to each other through raised wooden walkways on the island, which enhance the existing paths.

The project proposal’s aim is to exploit the island through a temporary and reversible intervention, and to generate a new use of the archaeological remains from the sea. Thanks to the reading of the history and archaeological evidence of the city of Marsala and the island of Mozia, an attempt was made to reconstruct a link between the city and the sea: first through an intervention strategy between the limits of the archaeological areas, the coast and the infrastructures; second, through the urban and architectural regeneration of the waterfront and historic center. The interventions on the Punic moat, Plateia Aelia and Motya’s Kothon try to interpret the signs of the history in a contemporary key, designing spaces for public use and architectures that are located between the past and the present, between the sea and the city, between the limits. 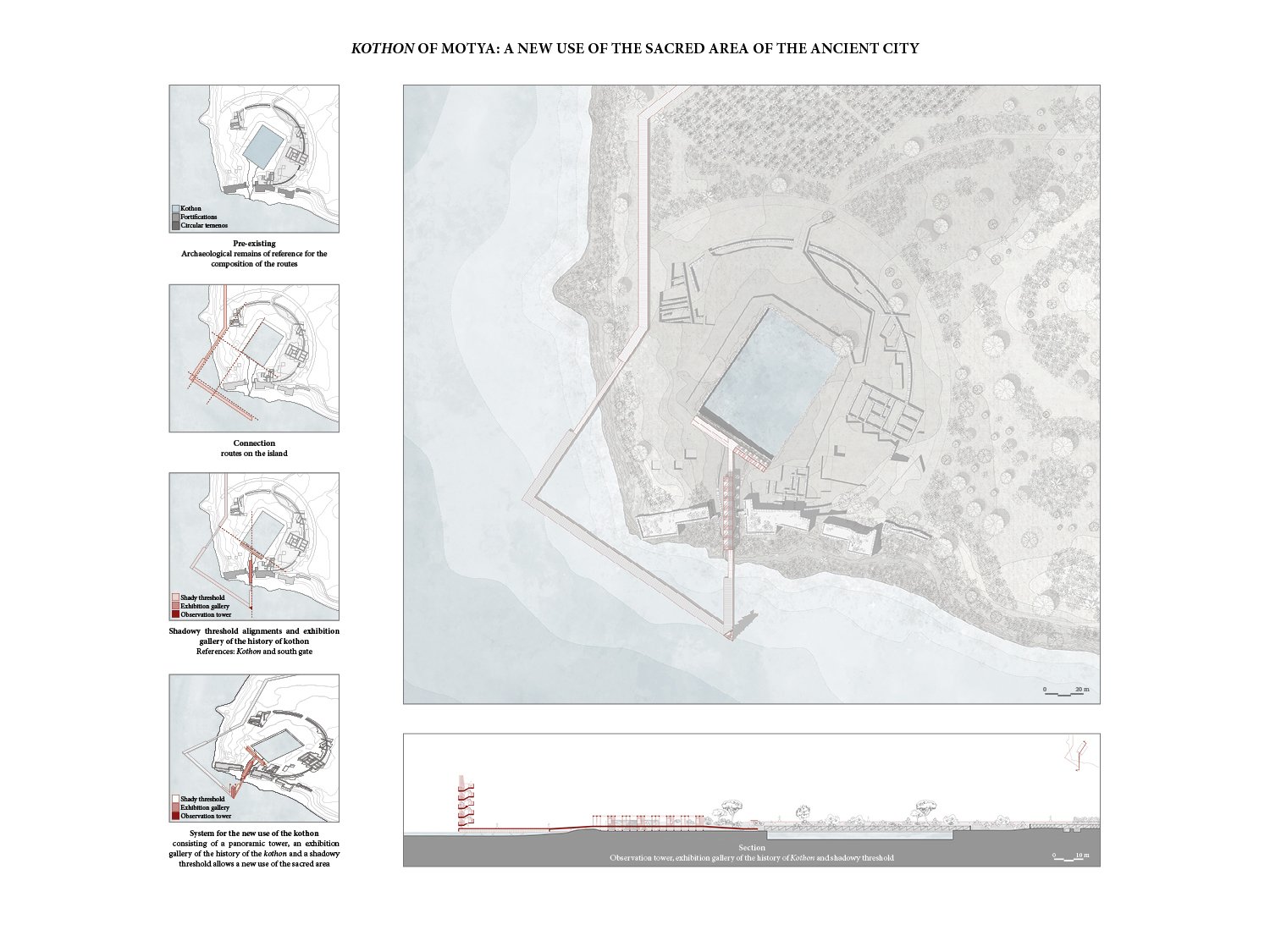