The new headquarter of the Rectorate for the Polytechnic University of Marche Region and for the new Ancona Province is located within the historic center of the Municipality of Ancona and the area borders to the north with corso Stamira, to the south with via Palestro, to the east with via Marsala and to the west with the space currently enclosed and intended for parking between the building in question and the historic building of the Rectorate. The position of the building is very important for the city as it is located between two large squares in the center of Ancona and precisely between Piazza Roma, the bridgehead of the spine of the city's courses and Piazza Pertini, an urban void of considerable importance in which the parking lot stands. largest and most important basement in the city. The building is therefore located in a crucial area of ​​the city, within the pedestrian and road crossroads that characterize the city of Ancona and precisely on the border between the pedestrian and road areas of the city of Ancona. The new project born from the idea of ​​creating a contemporary architecture in close relationship with the city. In fact, such an imposing building has an extreme need to confront with the city, to reflect the city and to return to being part of it. The building, although located in the center of the city of Ancona, is currently in a state of neglect and decay, separated from the city by a high fence that completely covers the ground floor and shows off the red iron skeleton that characterizes the seven floors of the building. The intervention consists of a global restoration both from an architectural, mep, structural and energy point of view in order to create a contemporary and functional building suitable for the current needs of new users. The facade of the new building can be divided into two types: the "overhang" facade system and the "recessed" facade system. The recessed façade system develops in the two "corner towers" characterized by the entrances to the new Rectorate and the new headquarters of the Province and on the entire ground floor, where the common areas are developed; the overhanging façade system, on the other hand, develops on the upper floors of the elevations parallel to Corso Stamira and via Palestro and contains the spaces dedicated mainly to offices. The recessed facade system covers the "noble" part of the building: it extends over the entire ground floor and then rises in the two corners with greater visibility: the corner towards Piazza Pertini and the corner towards Piazza Roma. The two corners represent a privileged point of view on the city: the one on Piazza Pertini houses the main entrance of the new headquarters of the Province of Ancona; the one on Piazza Roma, of equal importance, houses the entrance to the new Rectorate and insists on the new square connecting via Stamira and via Palestro. The recessed facade is characterized by a syncopated rhythm of openings, interspersed and vertically cut by the sunshades, which in turn follow another scan and create a phase shift of vertical planes that characterizes the building. The overhanging façade, on the other hand, mainly characterizes the two long sides: the one on corso Stamira and the one on via Palestro. This facade is formally configured in the opposite way to the one in the recess. Also characterized by three different rhythms: the rhythm due to the size of the panels, that due to the three colors and that of the openings, the facade, despite being of considerable size both in length and height, is light, varied and never banal. The facade panels are characterized by 3 different sizes and 3 different colors as can be seen from the image above. This solution, in addition to creating the rhythm of the facade, guarantees strong energy savings and good internal shading thanks to a high thickness of insulation positioned inside the panels and thanks to the projection of about 30 cm with respect to the glass wire. The two facades, therefore, despite being formally opposite, are characterized by the same basic structure (uprights and transoms), by the same elements and by the same vertical and horizontal rhythm. At first glance they seem to differ significantly, but upon careful analysis it is possible to perceive both the same metric and the same formal matrix. A game of full and empty spaces, recesses, protrusions and colors that fits well within the city, recalling the plurality of styles, typical of the Italian city, linked by the same underlying harmonic matrix. On both facades, the rhythm and quantity of the glazed parts was designed based on the orientation, in order to ensure high standards of liveability inside the building both in summer and winter. The shading of the facade is therefore guaranteed on the one hand by linear sunshades and on the other by the overhang of the panels. The intervention will lead to an overall restyling of the building, adapting it to a contemporary project that will revitalize the entire area. The architectural project is therefore aimed at the best practice that summarizes economic resources, environmental sustainability and architectural quality. A new project that respects the environment and fits into the city of Ancona as a new center of social, economic and cultural development. The project is completely realized in BIM both as regards the architectural, structural and mep engineering part. The structural project was designed by Acale srl of Ancona and the MEP project by Tfe engineering srl of Pianiga (VE) 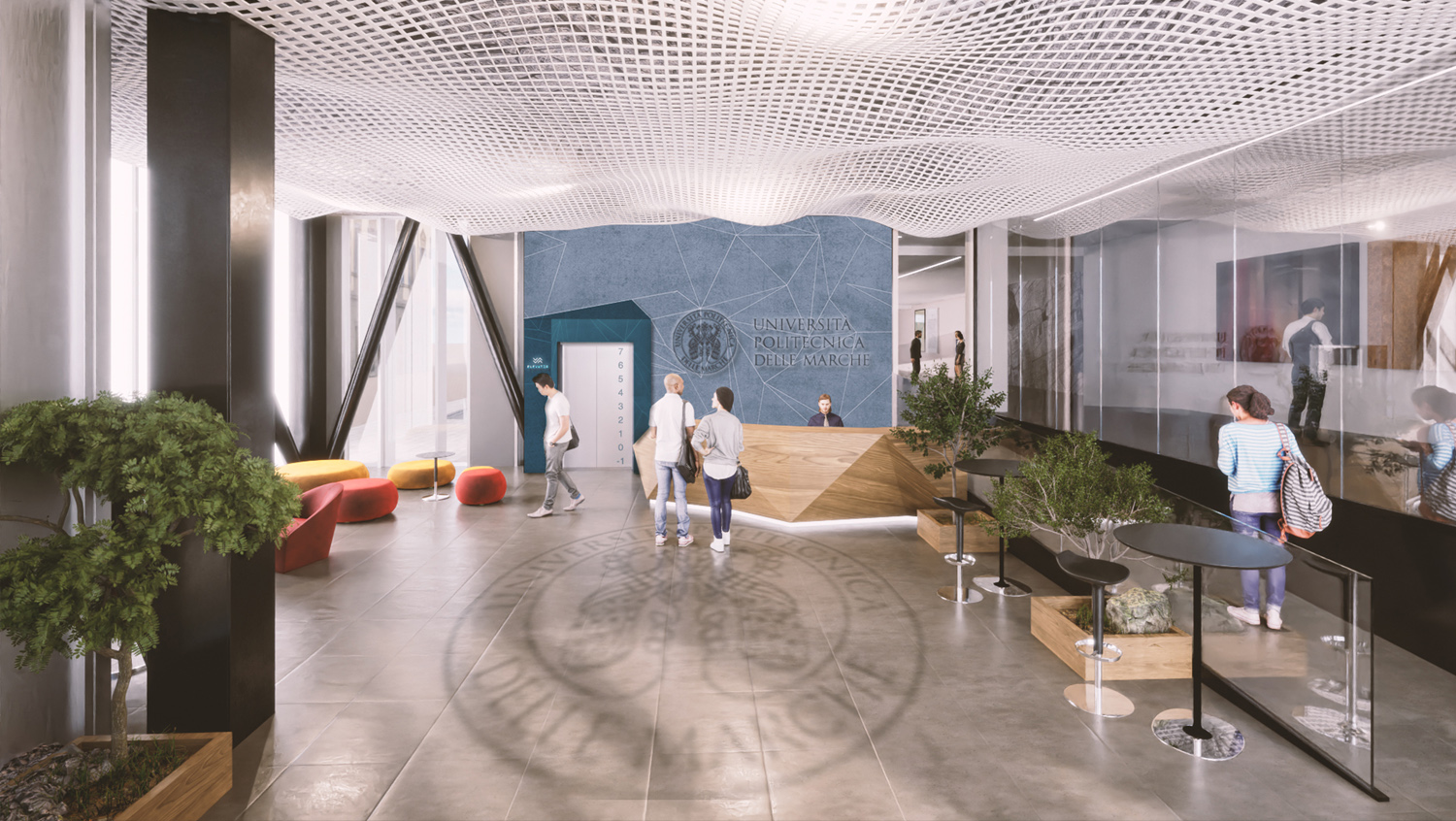 FIMA is a multidisciplinary studio for Architecture
Alongside architectural design, which has always been a core business, there are all those preparatory disciplines for the design of buildings and spaces capable of arousing emotions: architects, engineers, energy managers, economic managers, render artists, bim and cad experts, create a multifaceted team that guarantees a 360-degree approach to architecture.FIMA is a studio capable of tackling any type of project: from the interior design of luxury spaces, to the design of commercial buildings, from restoration projects of buildings of high artistic value to restyling and energy requalification of disused industrial spaces. A constant growth, matured in thirty years of presence on the market, has brought the studio to an international level. Today FIMA works in China, Iraq, Iran and Libya. FIMA projects are born from people and focus on people, their needs and the spaces in which they live.