Nanjing URBAN LIGHTHOUSE (In Construction) URBAN LIGHTHOUSE is one of key buildings in Nanjing Jiangbei New Financial Center (Phase I). it takes “lighthouse” as its architectural image, symbolizing the ancient-capital culture of Nanjing and the future of developing Jiangbei district. The building is located at plot C of New Financial Area (Jiangbei district, Nanjing), adjacent to Zongyi Rd. in the northeast, Guihua Rd. in the northwest, Zong’er Rd. in the southwest, and Jiufuzhou Rd. in the southeast. The total site area is 12,252.74 sqm and total size of building is 140,906 sqm. Fronting water and with a hill at back, URBAN LIGHTHOUSE faces the old city of Nanjing across the Yangtze River in the east, and beautiful natural landscape of Laoshan National Forest Park in the west. In its 4-kilometer zone, there’re not only historic sites like North Nanjing Railway Station and Pukou Park, but also emerging resorts like beach square at riverside. Thus, the design of the tower fully considers the relationship between mountains, rivers, people and city, as well as its organic connection with surrounding building in function, forms, colors and architectural details. With 300 meters height, the tower combines programs of office and hotel, including a luxury five-star hotel and 100,000 sqm of office space, showing its regional characteristic and international image. Inspiration: Lighthouse The inspiration comes from “lighthouse”, whose basic function is to guide ships at coasts or ports. Located on the bank of Yangtze River, the tower will as well play the leading role of Jiangbei district in East China and provide guidance and welcome as it is the only high-rise building with public function in New Financial Center. The architectural image of “lighthouse” is presented by a large cantilever swimming pool with fully transparent acrylic bottom, which lights up the top of the building at night, making a visual focus of the whole area. It is realized by structure of SRC frame and RC core. The minimalist change in its super B-class structure system will challenge in torsion, eccentricity, discontinuous floor slab and sudden change in stiffness, but also break the conventional image of high-rise buildings and achieve various experience. As the core of the lighthouse concept, the 10-storey huge opening serves not only as an outward platform where people can overlook the rivers, but also an inward connection between architecture and cosmopolitan activities based on its publicity of space and programs such as hotel lobby, restaurant, and swimming pool. Within the opening, Sky Green and Sky Blue, which have great technical difficulties, defines the most iconic designs in the tower. As a large garden on top of the tower, Sky Green brings nature in the air. At the height of 230 meters, 1/4 of the floor plan is designed for outdoor activities, where people can enjoy the beautiful scenery of the Yangtze River while engaging in social activities, and activities in air are ensured to take place in comfortable wind environment through simulation and continuous design optimization. Above Sky Green, the transparent acrylic pool bottom combined with LED grid dramatically sets the blue light pouring down, making the symbolic Sky Blue, where people in the pool can overlook the sky garden while have a panoramic view of the prosperous night scenery of the city. The huge cantilever structure is realized by cantilever truss along the outer frame. Full-floor truss is set at the edge of the pool due to the large depth of the opening, while the pool itself is supported by hanging columns and steel beams. Nature: Green Extension Besides Sky Green, other sky gardens of various sizes are set up at different height, in order to make full use of the surrounding landscape resources like urban greening nearby and mountains and rivers in distance. Similar but smaller openings are designed in corners, with their concaves corresponding to the view from different directions. The gardens in these openings guide the landscapes from low to high, and from near and far. They’re not only echoing the most striking elements of the tower, but also making unique figures of the tower in different perspectives. Sky gardens spiral and ascend step by step from the ground to the sky, developing the entire building while creating a dialogue with surrounding environment. They’re all set at the beginning floor of each cross-floor office zone, which integrate indoor functions with outdoor vibrant activities at featured floors and enrich the experience of office space at lower floors. The greening becomes a connection that runs through the entire building, extending natural landscapes such as civic green spaces, Qi’li River and Laoshan Park up in the air in orderly row. Facade: Cloud Brocade Regional characteristics are fully considered in the façade. The dynamic façade is inspired by the world intangible cultural heritage - Nanjing Cloud Brocade. Horizontal and vertical fins with various spacing work in concert with the position of the openings, forming the weaving-like cross texture in regularly changing density. The openings reveal the interactive space where people and functions gather, and become interfaces between indoor and outdoor communication as well as publicity and privacy. Relatively, the texture gets denser when close to the openings and looser when it spread up. The gradual façade texture not only maintains the basic concept, but also emphasizes the tower’s sense of sculpture. Like the grid distortion in general relativity, the density changing texture exhibits the effect of external environment on the building’s skin, forming a specially tensive and dynamic architectural image. 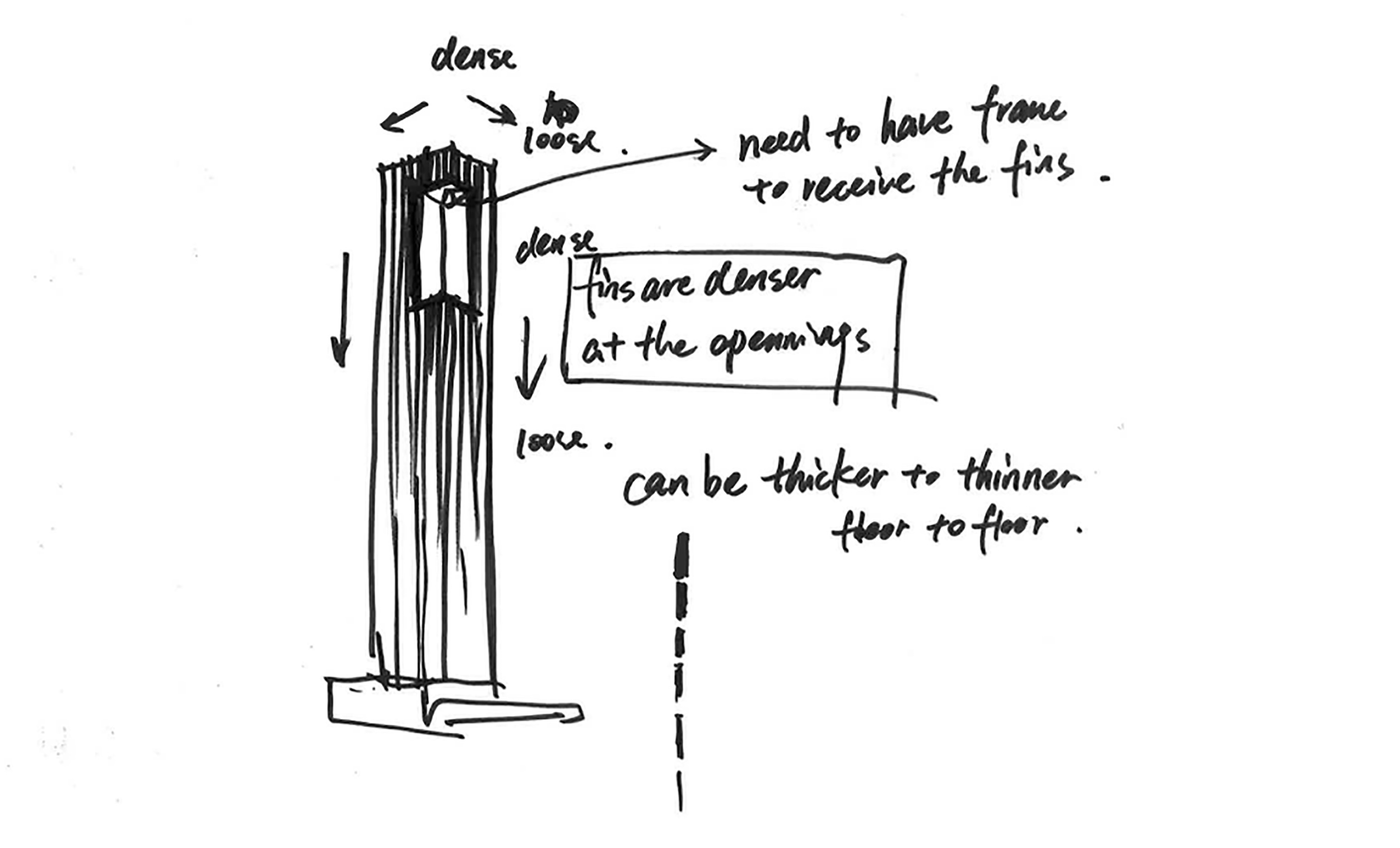 From its inception in 1977, the firm received almost instant attention and acclaim from critics and the public alike, due to a bold modernism that was immediately identified with a renaissance in Miami’s urban landscape. Led by Principals Bernardo Fort-Brescia and Laurinda Spear, Arquitectonica continues to push the limits of design with its innovative use of materials, geometry, pattern and color to introduce a new brand of humanistic modern design to the world.

Arquitectonica has received hundreds of design awards and its groundbreaking work has been the subject of exhibitions at numerous museums and institutions. Arquitectonica is known as one of the pioneers of globalization in the architecture profession. Today its practice spans the world, with projects in fifty-nine countries on five continents.