The Massachusetts Institute of Technology is developing Kendall Square, where the City of Cambridge and MIT merge, to encourage the integration of business and academic research. The Kendall Square area is characterized by a variety of architectural styles, scales, and material palettes. As a key member of a focused design team, Weiss/Manfredi worked closely with MIT to develop an urban plan for the district that was responsive to this context and consistent with MIT’s programmatic goals. Weiss/Manfredi was then chosen to design 314 Main Street, known as MIT’s Site 5, which houses the MIT Press, the MIT Museum, and 12 floors of incubator office and research space. The new building leverages the site’s location at the intersection of Main Street, the Kendall Square subway stop, and the new campus entrance. Both in physical form and programmatic development, the Site 5 building is a hinge between urban and campus settings: a public gateway and a dynamic point of connection between the Kendall Square community and MIT campus. At street level, Site 5 is a welcoming destination with entrances to the building lobby, the MIT Press, and the MIT Museum. A café and restaurant occupy both corners along Main Street, wrapping around the east to a pedestrian thoroughfare and the subway stop. The facade at this level maximizes transparency, generating a fluid transition between the building interior and the public way. The museum plinth above creates an overhang to shelter pedestrians. At the northeast corner, the building massing is shaped to guide pedestrians to the museum and the campus green. New trees and paving connect Main Street, the adjacent subway stop, and a new entrance to the MIT campus. With Main Street to the north, the MIT campus to the south, and a subway stop adjacent, the 17-story building frames a strategic gateway between the city and the university. Responding to both the city and the immediate context, the building creates a transition from brick buildings on Main street to a newly created campus green that will become an important part of MIT’s network of open spaces. The building responds to these contexts and programs through the articulation of its massing and façade. The highly transparent street level is animated by active retail and strategically positioned building and museum lobbies. Above the ground floor the creation of a floating plinth for the MIT museum establishes an urban scale compatible with adjacent historic buildings. The office tower’s multiple folds and facets improve views and introduce shifting patterns of color depending on orientation and time of day. The office tower is a composition of multiple folds and facets that improve views and introduce shifting patterns of color depending on orientation and time of day. The façade continues the pattern of the plinth below and, as it travels up the building, becomes more transparent at the building corners to maximize daylight and capture panoramic vistas. Inside, large, open-floor plans, tall ceiling heights, and state-of-the-art mechanical and electrical systems provide optimal work environments, easily accommodating a range of tech startups and various modes of research. The façade materials include a combination of metal, fritted glass, and acid etched glass. These dematerialize the tower by alternately reflecting the sky and adjacent structures. At 250 feet above street level, the folded façade creates a pitched silhouette that engages the horizon. The museum plinth establishes an urban scale compatible with adjacent historic buildings. The top of the plinth extends the existing horizontal datum of low-rise historic buildings on Main Street. The MIT museum, located on the second and third floor, is wrapped with a façade of articulated opaque and transparent panels calibrated to meet the daylight requirements for exhibits and museum programs. Composed of metal fins, reflective vision glass, and color integral etched glass shadow boxes, this façade reinterprets the historic brick context using a contemporary language. The pattern is articulated to the scale of Main Street. The top of the plinth hosts a conference floor and terrace that will be used as collaboration space for office and research tenants on floors above. In summary, the overall form of the building negotiates multiple scales: it creates a lively presence at street level, at the plinth level it relates to historic adjacent buildings and at the scale of the tower it offers a striking silhouette against the larger urban horizon. 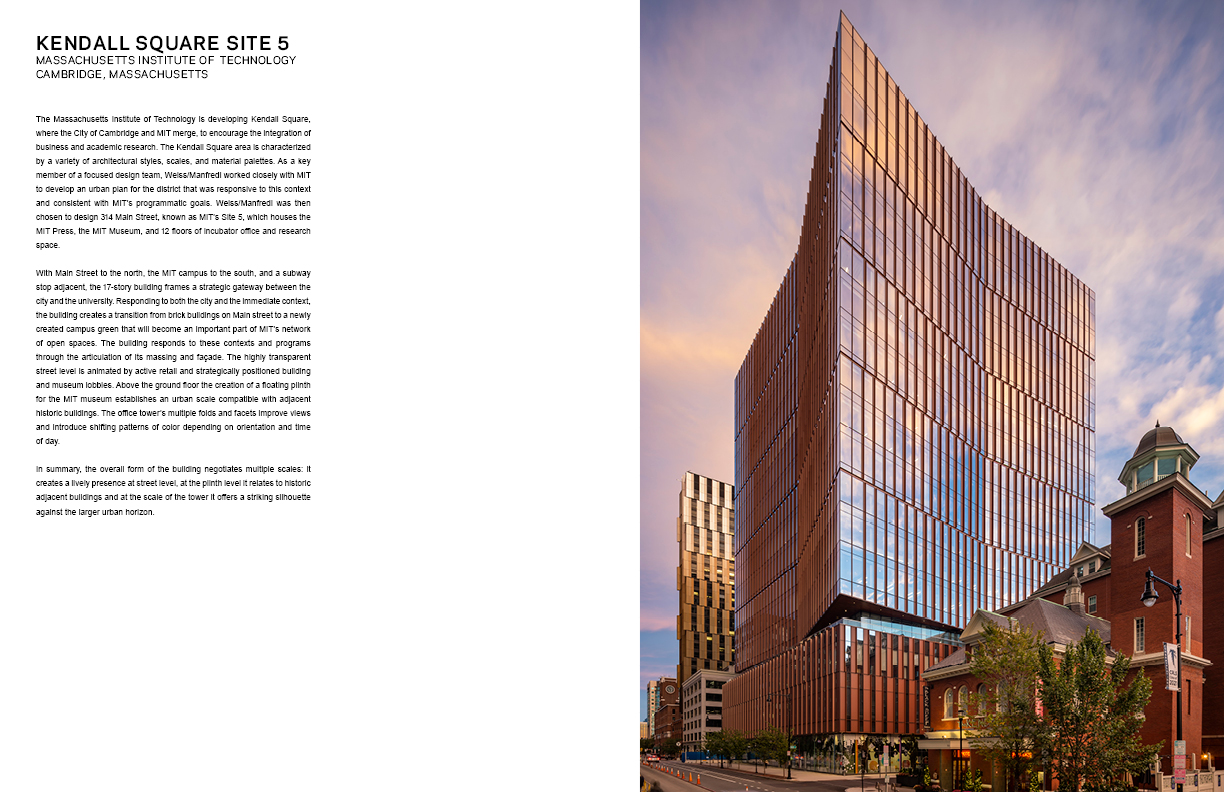 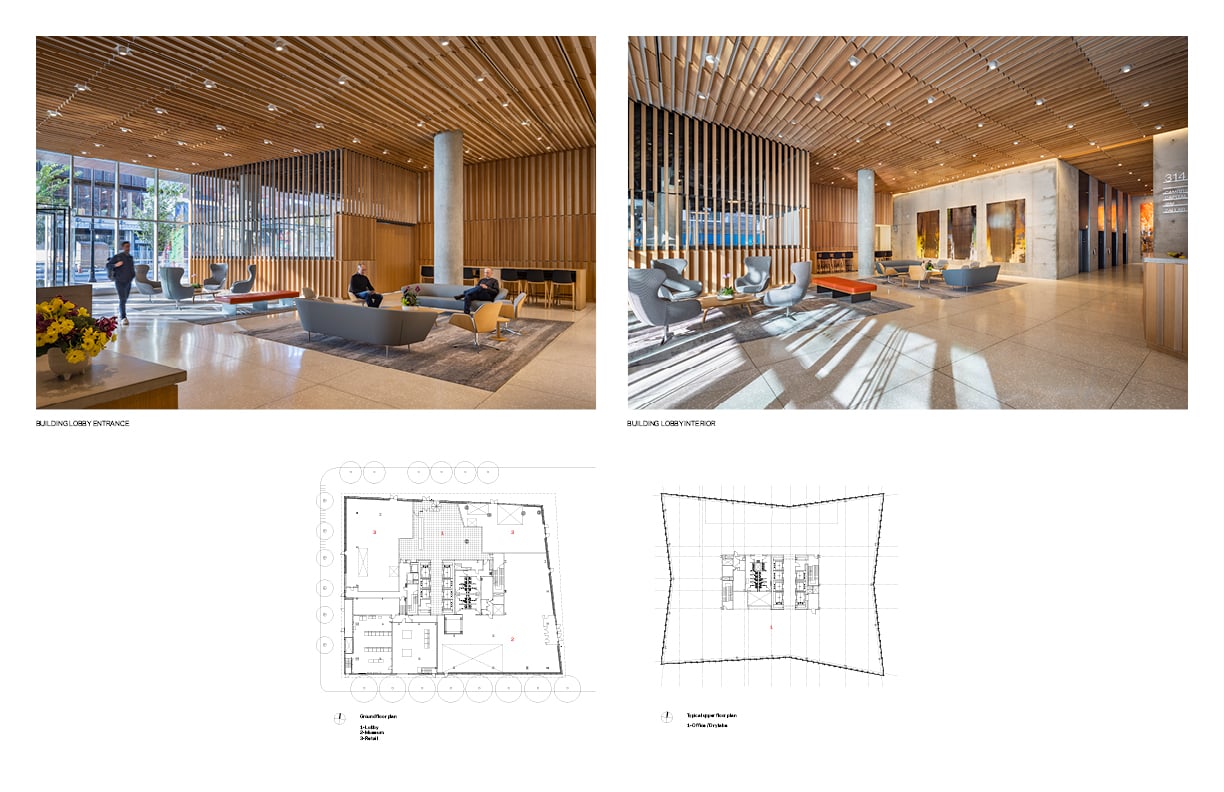 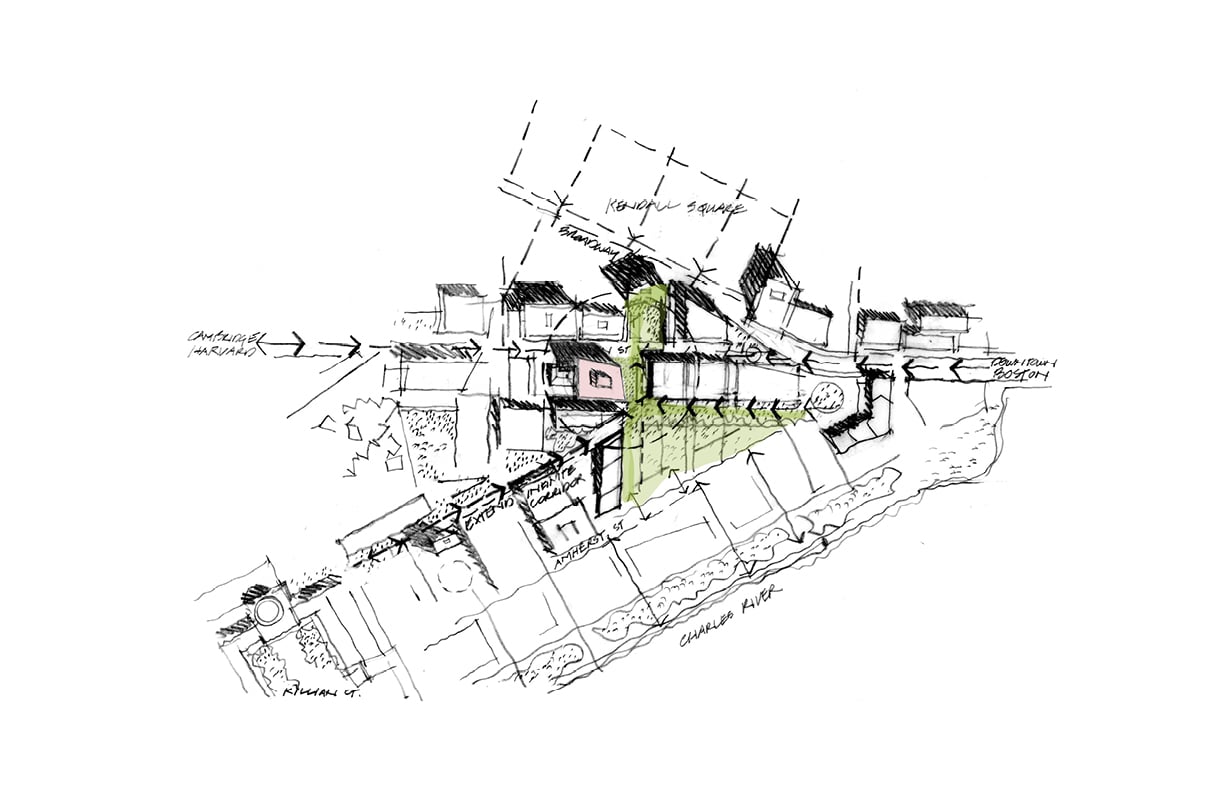