The building is located in the municipality of Anzola dell'Emilia, Metropolitan City of Bologna, within an area included in the so-called Piano Urbanistico Attuativo del Comparto C2.1. The municipality of Anzola dell'Emilia is located between the cities of Bologna to the east and Modena to the west; the main town, where the project is located, lies on the Via Emilia, and on its territory there are a number of major industries, particularly mechanical. The so-called Comparto C2.1 constitutes the natural expansion of the recently developed residential area located west of the municipality of Anzola dell'Emilia in continuity with the main and more historicized core of the town, and is bounded by the Emilian countryside to the west and north. The new construction intervention is the first in a residential complex of 3 buildings. The building is exclusively for residential use and consists of three above-ground floors, accommodating 7 housing units, each with a cellar and garage. The particular orography of the area where the intervention is inserted prohibits the construction of basement floors so that on the ground floor of the building, in the area to the west, necessarily find place the accessory spaces represented by garages and cellars. In the portion to the east is located an apartment with an exclusive garden. On the upper floors we find four housing units on the first floor and two housing units on the second floor. The project predates the pandemic period by a little, but the housing typologies take shape from the search for new residential forms that consider outdoor spaces not as mere accessorial equipment of the housing unit, but as actually exploitable elements that concretely expand the living areas of the spaces inside the apartments. If in the pre-pandemic period this vision appeared as an opportunity aimed at providing innovative and contemporary responses to the usual layout of the typologies offered by the housing market, the two years of lockdown have radically changed the perception and use of living spaces making this design intuition a necessity. Energy aspects are very important in the genesis of the project that aimed to achieve nZEB class. Thus, external masonry packages of the infill of the building are very high performance. At the same time, the plant engineering section is designed to fully compete with the energy class and the realization of a building that conforms to contemporary parameters. In particular, the building is equipped with a condominium photovoltaic system that powers individual heat pumps afferent to the separate housing units. As a result of this plant choice, the building has no equipment that requires connection to the public methane gas network producing positive effects also in terms of passive safety of the building. An important aspect in the definition of the project is in the architecture of the building, which had to fit into an area of expansion, thus of dialogue with coeval buildings, but at the same time with needs to mark its own linguistic autonomy. The buildings already built are mostly finished or planned for a few years; the crisis in the construction industry has produced a period of slowdown in the completion of the urban planning. In these years of stalled building industry activity, however, regulatory acceleration related to building energy requirements has been important, as have technological innovation and end-user awareness and insight into energy issues. For these reasons, the project set out to give continuity to the built environment in some respects in order to avoid significant ruptures, and it was decided to resume the size of the volumes, the pitched roof, and the types of shading systems. At the same time, the form and colours are disjointed from what is already in place to shape a building with its own originality. The colours of the building originate from more general considerations relating to the rising climatic temperatures we are unfortunately experiencing nowadays. In the past, there has been a greater focus on winter living comfort by increasingly improving the performance of the building shell, especially in terms of energy dispersion. Today, due to rising temperatures, the summer period stands out as an equally significant element in terms of design, not only in reference to the building but also to the microclimatic changes in the surrounding environment generated by it once built. The materials used to finish the exterior and the typological characteristics of the project contemplate fronts with painted coatings and in part with horizontal bands; the colours chosen are light to reduce heat absorption during the summer months, as light colours absorb much less heat than darker ones, thus absorbing less light energy with obvious advantages in terms of the building's energy efficiency. Similarly, the roof is light in colour, considering that very often roofs are dark and represent elements that most contribute to the heat island effect in urban areas. So colour becomes a design element underlying summer living comfort inside the building, but also a design element that contributes to improving external summer comfort. Finally, the pitched roof was designed with an asymmetrical double slope, favouring the length of the southern pitch to accommodate the photovoltaic panels. The roof covering is made of pre-painted sheet metal. This element strongly contributes to characterising the building as an urban element that marks a change in the housing typology of the area. 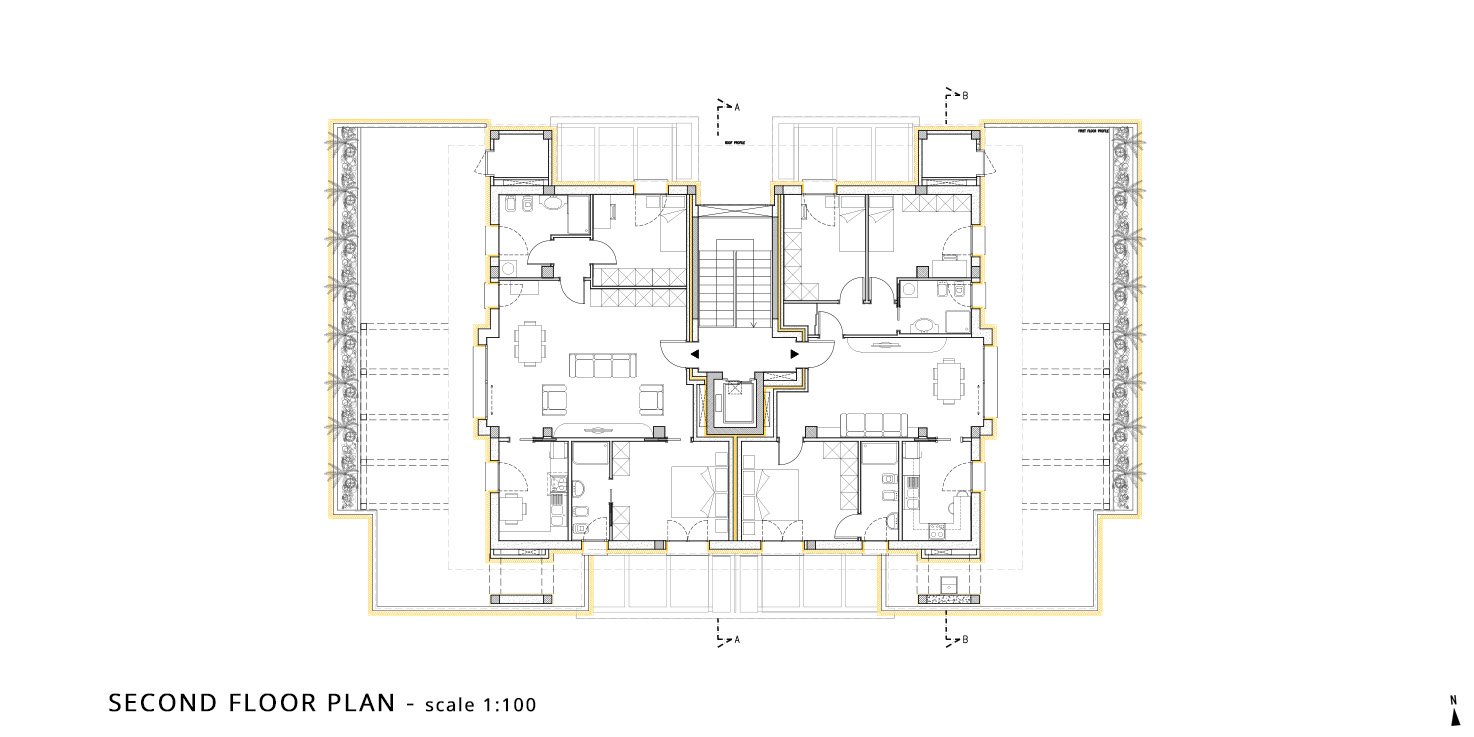 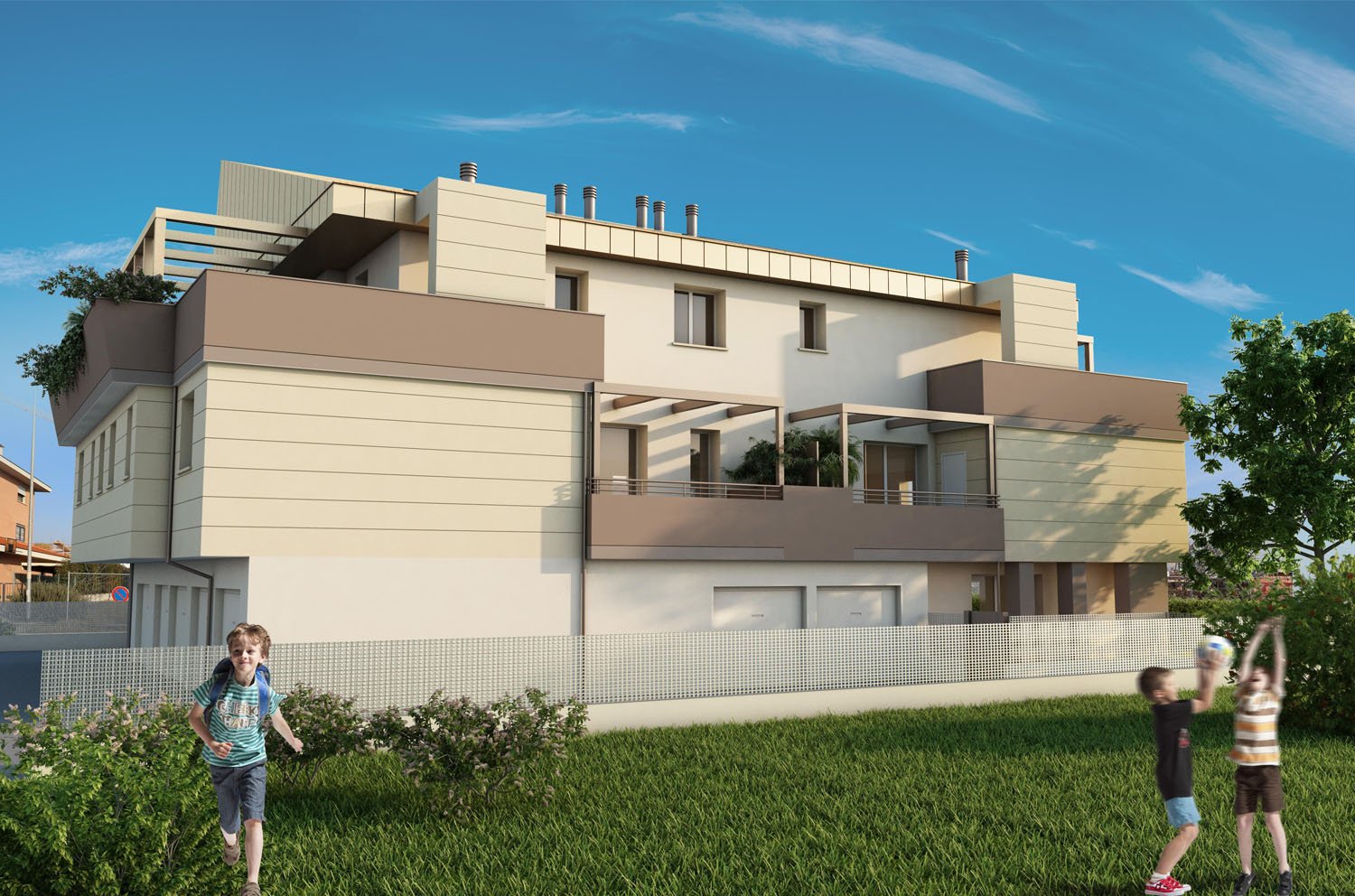