A microdistrict with eight residential areas and a unique look The consortium of the Gradplan Moscow + Dialectica (Spectrum Group) + Atelier PRO Architects has developed the concept of a comfortable and modern microdistrict that performs residential, public and recreational functions. At the first stage, it is proposed to create a multifunctional residential complex for two hundred apartments with a community, medical, sports and media centers. Also, the project includes the construction of residential complexes for two thousand apartments and social facilities as kindergartens, schools and clinics Yards are designed considering the natural and climatic features of the territory. The visual image of the microdistrict is inspired by the nature of the Peninsula. Design solutions are cost-effective as the annual growth incomes of the population is predicted, associated with the creation of new jobs, as well as an increase in consumer activity. The concept of a new microdistrict in the city of Monchegorsk has been developed. The project is designed to create a recognizable image of the territory and emphasize its unique identity, which is largely determined by natural environment of the Kola Peninsula. The concept includes the creation of a comfortable urban environment with quality housing, commercial facilities and social infrastructure within walking distance. The synergistic effect of this approach will increase the value of real estate adjacent to the microdistrict. This, in turn, may not only reduce population decline, but also attract new residents. The new microdistrict can become a multifunctional urban core and set a new level of quality of life, activating the further development of the entire Monchegorsk. The site is located in the center of Monchegorsk, between Lake Nyudyavr and Monche-guba Bay, the Central and Southern districts of the city. In the east, the Lenin Avenue - one of the main streets of the city, borders it. There are strong winds in this part of the city and in order to create the most comfortable environment for pedestrians, two solutions have been proposed. The first is the alignment of the main directions: connections with the local center do not pass directly through the entire microdistrict, but with a slight shift, which prevents an increase in wind speed without complicating navigation for residents. The second, is designing of the blocks with the “antifunnel” feature, where enclosed or semi-enclosed yards are protected from the wind. Antifunnels will significantly reduce the speed of the wind blowing through the area, making the territory more comfortable. The microdistrict meets the need for visual accentuation of the characteristic elements of an urbanized territory. Such elements in the are: its "heart" - the agora square, a kindergarten and multifunctional residential complexes with a developed stylobate part overlooking it; frontal street development, as well as a contrasting urban silhouette, emphasized by the pitched roofs of multi-story buildings The territory is a combination of residential and public functions, linked together by pedestrian and transportation routes. The microdistrict hosts eight residential areas, each of which has its own unique look, name and identity: "City of Five Lakes", "Arctic", "Lapland", "Skier", "Russian North", "Russian North-1", "Fishing Village" and "Scandinavia". When choosing their visual image, the authors were inspired by the nature of the Kola Peninsula: the color scheme of the facades emphasizes the contrast of warm and cold shades of the tundra, stones and lakes. Block development ensures the creation of a comfortable environment and fulfil the need in social and commercial infrastructure. Cozy, well-maintained, enclosed yards form residential buildings standing around the perimeter, becoming a safe private area, inaccessible to strong winds. Retail and commercial premises occupy the first floors of residential buildings. Under each of the residential complexes, an underground parking lot is constructed. The stylobates house, the entertainment, education and personal development facilities are included for all ages. Public areas are filled with life: window shops and lanterns are lit at night, people meet in the "heart" of the microdistrict maintaining social contacts. Two scenarios for the development of public spaces include functioning in both summer and winter. In the winter season, they can be adapted for skiing, skating and snowmobiling, and in warm months - for cycling and running. It is possible to use infrared heating units, heated outdoor furniture and ground coverings. Evergreens will increase the attractiveness of the new neighborhood and surrounding streets. The project has organized active cycling and pedestrian lines both within the microdistrict and in the surrounding areas, including a single cycling route along Lenina Prospekt, Gruzovaya and Moroshkova Streets, as well as along the planned Bredova Street The main factor in high-quality residential development is the presence of a well-maintained and comfortable environment. It was established to make the adjacent water and green areas accessible to residents The construction of the new microdistrict is planned to be carried out in stages (2024-2028). For the first stage of construction until 2026, a multifunctional residential area-hub "City of Five Lakes" is planned, overlooking the agora square and one of the main streets of the city - Lenin Avenue. The square is connected with the hub by a grand amphitheater staircase. There are 211 apartments in the residential complex. In the stylobate part, it is planned to organize commercial and social spaces. In the center of the complex there is a playground for a kindergarten For the proposed design solutions, economic efficiency is calculated: an annual increase in the income of the population associated with the creation of new jobs, an increase in net profit, which forms the gross regional product, as well as an increase in consumer activity are predicted 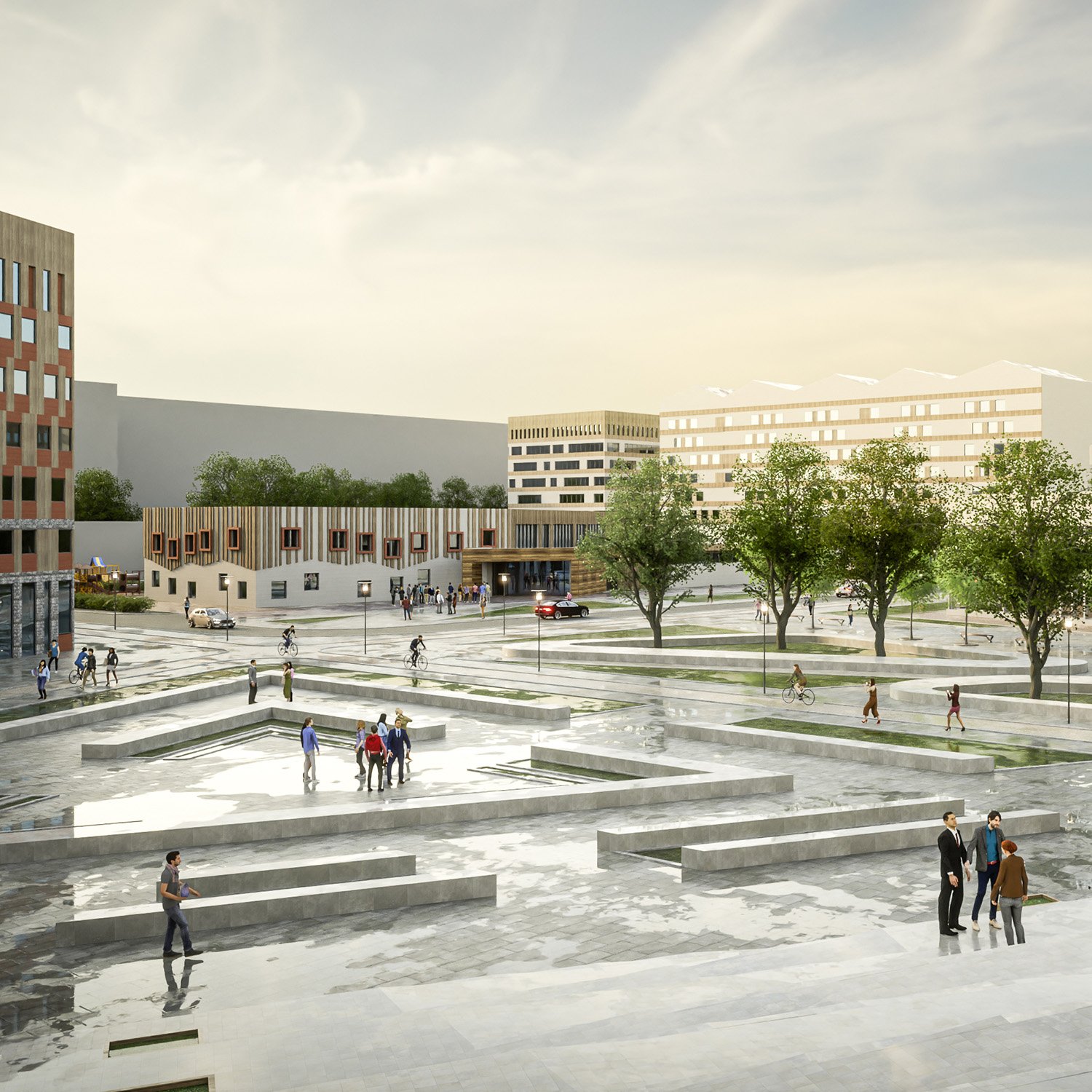 State Research and Design Institute for Urban Development of the City of Moscow is a state organization specialized in Architecture, Engineering Infrastructure, Transportation, Economics, and Social Sciences.
Spectrum Group is a multidisciplinary holding which specializes in creating objects of various applications.
Atelier PRO was set up in 1976 and is an architectural firm in The Hague with professionals in architecture, urban development, interior design and building and costs management.