The home centers around a vertical courtyard that connects all three stories, along with adjacent terraced gardens, to create moments of simplicity and poetry within the residence. Los Angeles has a long history of courtyard buildings, and that in combination with the privacy it offered helped drive this concept. It’s essentially a three-level home pushed into the ground with a landscape that folds down to the basement level. As such, all floors, including the basement, are filled with openness and natural light, and feel engaged with adjacent outdoor spaces. Conceptually, the house is split into two distinct volumes with a landscaped strip bisecting the space. The floating ‘box’ second floor hovers in place above the poured concrete footing and ground level living quarters. The three-story courtyard/atrium feeds light through each of the floors, including the basement, while providing sight-lines to the backyard, above and below. A series of movable privacy screens further blur the edges and help articulate a minimal façade while the concrete base on the lower levels acts as the anchor from which these elements all come together. Producing moments of transparency, the glazing frames views and integrates flow between rooms. Sandwiching the first floor is the basement--complete with a guest suite, family room and walk-out patio--and the third floor featuring a library, two additional bedrooms, bathrooms, and the master suite. The library, bordered on two sides by landscape eaves, overlooks a casual seating area close to the front door entry. Integrated planters and a private deck extend the master bedroom, lending a view of the linear pool and reconnecting to the green-space below. A bridge continues the core circulation from the library across to the secondary mass of the house, providing close proximity for family members while maintaining privacy. The home is largely inspired by the Southern California neighborhood and Swiss design, which influenced the craft of materials and manufacturers sourced. All of the materials were selected in response to natural light, considering varying intentions, reflectivity and textures. It blends together Swiss and California design elements with hints of warmth and texture from the wood and concrete. The materials are natural, durable, yet contrast in their relation to one another. The layering of louvered screens, glazing and concrete create an abstract yet consistent separation between the neighborhood and the residence. From here, however, these elements begin to shift or disappear altogether, allowing for a hierarchy of security, exposure and circulation that creates a dynamic, varied experience within the plan. Ultimately, there’s a balance between the crispness of the concrete architecture with the softer warmer edges of the wood and a California lifestyle. When crafting this home, the values of the inhabitants, the family and the way they wanted to live informed the ideas and the design. The Client’s main goals were to keep true to the neighborhood while weaving in privacy, views, and a connection to the landscape. The neighborhood is one of the older coastal canyons in Los Angeles, and has a mix of both historic and eclectic homes. It’s relatively lush and coastal, yet still remains somewhat urban and compact. The lot is relatively small, so it was important to stay sensitive to the scale of the home in the neighborhood and not overbuild. This was achieved by organizing the house around a vertical courtyard, which also helped manage privacy issues as many of the spaces look inward allowing for large walls of glass to remain fully open while retaining a level of privacy. Additionally, a folding garden feature sees the backyard greenery work its way subtly into the footprint of the living space from the central courtyard into the basement living quarters. This relationship to the plot subverts the traditional notion of ‘boundary’ by allowing the home to feel simultaneously protected and emergent of the site. Coupled with fully operable glazing on each level and the interstitial spaces, the home feels private from anywhere on the lot. 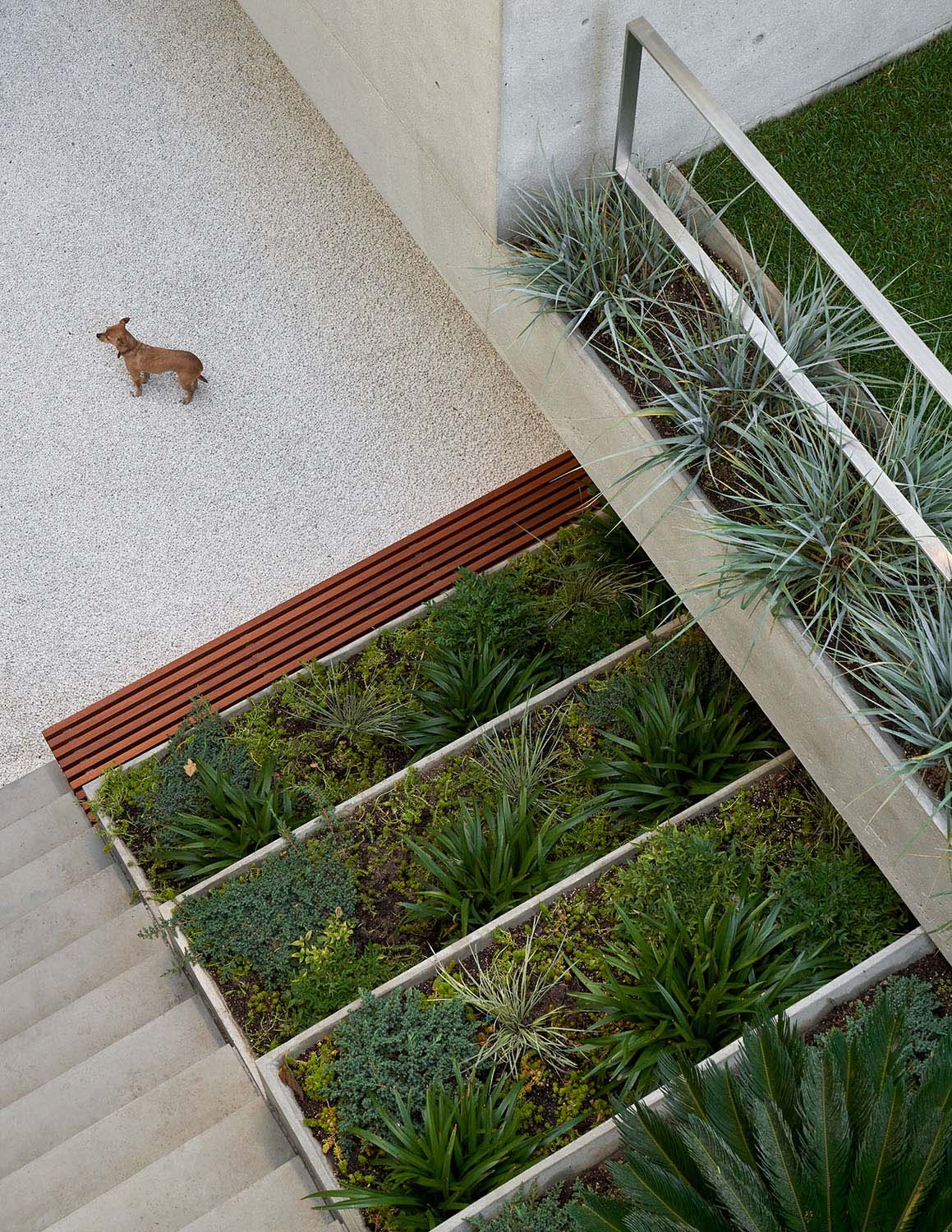 Founded in 2004, Montalba Architects is a multi-disciplinary firm with studios in Santa Monica, CA and Lausanne, Switzerland producing select architecture projects. The studio’s work ranges in scope and context, from rural landscapes in the Swiss Alps to the dense urban scapes of New York and Los Angeles. By embracing a humanistic approach that considers not only a client’s needs and site considerations, but also the cultural and economic environment, solutions are realized that are contextual, yet conceptual in their intent, effect and appeal. Each project emphasizes experiences by creating environments that are both socially responsive and aesthetically progressive.