The Ilan and Asaf Ramon International Airport was designed by Amir Mann-Ami Shinar Architects and Planners in partnership with Moshe Zur Architects. The Airport, servicing the Red Sea resort city of Eilat and surrounding region, was commissioned by the Israel Airport Authority (IAA) and was handled from A to Z by the architects in their role as Design Managers. Located in Timna, it is Israel's first civil airport built from scratch ("greenfield") and will serve as the new southern gate to Israel, expected to host 2.25 million passengers per year, that figure bound to grow to an estimated 4.25 million passengers per year.

The Ilan and Asaf Ramon International Airport was completed with significant achievements, firstly, an international airport fully constructed and operational within budget, funded for less than half of similar projects worldwide; on schedule for opening day within an exceptionally tight timeframe; a "greenfield" without existing infrastructures, included the creation and implementation of cutting edge navigation, landing, and baggage handling systems, runways, and operational buildings - while maintaining the existing natural surrounding and a control of quality; all led by the team of architects to a rather extraordinary feat - the entire airport is unified under one unique holistic design language that frames the stunning scenery of the Negev Desert mountainscape.

Spread across 1,250 acres, The airport features a 45,000 square-meters passenger terminal building and 3,600 meters long runway and taxiway, alongside 40 aprons, allowing for domestic and international traffic. The two support structures to the north and south of the terminal measure a combined 36,210 square-meters with a 45 meters-high air control tower.

For the project, the architects developed a unique and minimal design language influenced by the futuristic world of aviation and its seemingly timeless natural desert surrounding. The decision of the IAA to appoint the architects as design managers responsible for budget, program, and planning schedule, allowed for the architects to implement the design across the entire airport - from the various buildings to each individual check-in counter, thus unifying the airport on all its parts into a holistic singular entity within the dramatic emptiness of its surrounding. This is evident from a general concept of carved geometries, through a limited choice of materials used to clad the family of forms.

"In designing the airport we learned from the desert scenery. It required a vision of the most suitable design solution that responds to the existing landscape and climate. Our objective was how not to compete with the overwhelming emptiness of the site, while creating a place that welcomes passengers through the departure and arrival processes, reflecting through that experience the uniqueness of the desert environment, as a functioning international southern gate to Israel." - Project Design Manager, Amir Mann.

The mushroom-like rock formations found in Israel's National Timna Park served as inspiration for the initial geometry of the passenger terminal building as a self-shading volume. Just as the rocks are shaped by the "natural movements" of wind and water, the terminal's opaque volume was carved by the "natural movements" of the passenger traffic: at the entrances and exits, at the divisions between arrivals and departures and between check-in and boarding gate halls. At every such occasion glass curtain walls were inserted, surrounding patios that introduce the natural desert landscaping into the building. These serve as light wells allowing natural light into the depths of the terminal, instead of the commonly used skylights, impossible within such climate conditions.

The terminal's envelope consists of a steel and concrete skeleton structure, cladded to the exterior with insulating aluminum triangular panels, continuous from wall to roof that create one single mass. The pristine white panels reflect the light rays and the UV waves and thus help in further reducing the skin's temperature. Towards the interior, the building's volume is hollowed out and the envelope is cladded in a contrasting bamboo-wood, uniting the ceiling and walls over one continuous space.

The terminal building's minimalist interior scheme is based on a tightly organized high-ceilinged hall with low-level furniture and pavilions acting as dividers. Its entire infrastructure including baggage handling, security processes, and many other technical operations and systems are all hidden on a lower level. This allows for the roof to be free of any technical equipment as a fifth façade viewed from the airplane window, and for all passenger processes to be efficiently on one single level. The result being a "Miesian" - like terminal hall where all passenger traffic is viewable, separated only by the desert patios. The terminal opens at the boarding gate area with a 20 meter high glass curtain wall towards the theatre of aviation with the desert view as a backdrop.

The landscape development drew inspiration from the existing river delta fan created by the mountain flooding into the desert valley. Thus, the delicately winding paths of the parking lot and the landscape development follow the shape of the natural spill from the streams. Also, all the sand and rock infrastructure excavated at the site was used as a filler for the construction of runways and airplane hardstands. A grinding factory was set up to crush the pebbles into bedding materials. The land collected during dig was also used to finally cover the ground upon completion of construction to seamlessly integrate the landscape development with the natural surrounding. In addition, local plant seeds were harvested and preserved at the site, grown and incubated in greenhouses during the years of construction, and finally returned to their original location, to serve as the desert vegetation lining the airport's landscape. 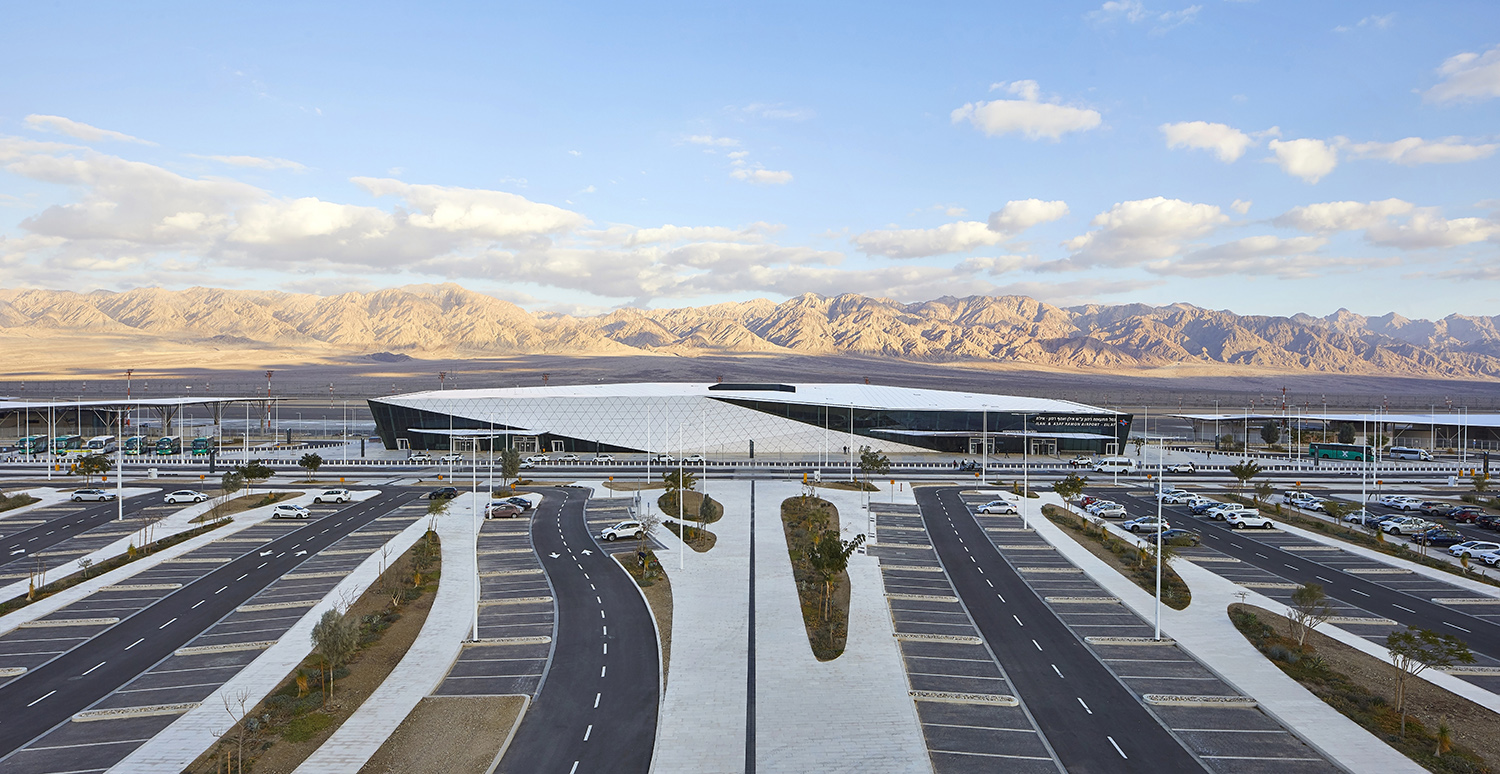 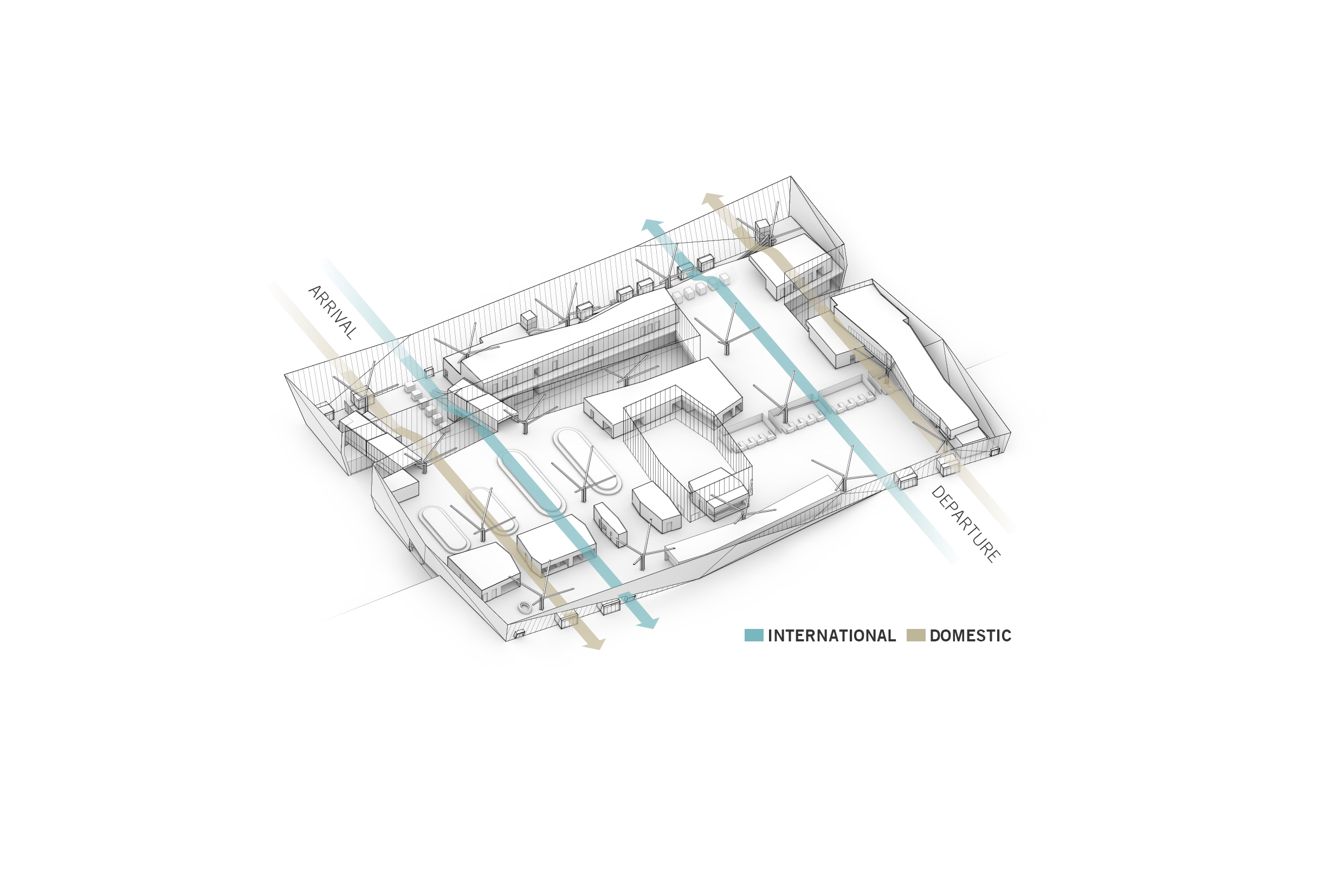 The office of Amir Mann and Ami Shinar focuses on the architectural and urban design of a wide spectrum of projects, ranging from city planning, new urban quarters, residential neighborhoods as well as new office, commercial, high-tech and public buildings. Recent projects include the new American Consulate General in Jerusalem, directly by the US State Department; a new International airport for Eilat; An office tower and commercial center for the Azrieli Group; Headquarters and campuses for high-tech companies such as HP in Yehud, Motorola, Mirs and Audiocodes amongst others in the new Airport-City development; The central support and operations building at Ben-Gurion International Airport and a residential tower in Tel-Aviv and more.