The church dedicated to Saints Liborio and Vincenzo Maria Strambi built in Civitavecchia is a collective work. As often happens in these types of buildings that are built over a number of years, (on the Civitavecchia cathedral you can read the inscription “DOM- IN HONOREM S. FRANCISCI - CLEM-XIV-PM- INCEPIT- PIUS VI -PM- PERFECIT), several Bishops intervened in the realization of the work (Mons. Chenis with the laying of the first stone, Mons. Luigi Marrucci who presided over the first part of the construction and Mons. Gianrico Ruzza who inaugurated it on 11 October 2020) as well as various ministers of worship (in particular the parish priest Don Federico Boccacci and the bursar Don Diego Pierucci) and several technicians. The architect Crostella and the surveyor Varlese both contributed to the construction of the project and in fact drafted the preliminary project in 1999.
A few years later my father, Engineer Giovanni Evangelista, and I we were called upon to continue this work by drawing up a second project with a general variation, by simplifying the work also for financial reasons but maintaining the main choices already made by our predecessors in the circular layout of the church. We dealt with the study of the interiors, the finishing materials with a particular focus on the presbytery, the apse and liturgical fires. The project for the constructions was drawn up by my father who followed the building work with me but who unfortunately did not manage to see it finished as he passed away in 2017.
The ecclesiastical building, located in the homonymous district of S. Liborio in the north-east of the city of Civitavecchia, is made with load-bearing elements in cast-in-place reinforced concrete and looks like a set of volumes plastered in a candid white from which the helical staircase that dematerializes the bell tower and the large apsidal window in alabaster from Volterra stand out. The general layout of the complex, which will be completed with the construction of the parish center, is located in the middle of a green hill, rising above road level. The church is accessed via a large, inclined ramp that reaches the churchyard, a large reserved, intimate space, closed on three sides by the parish center (north), the facade of the church (east) and the green hill (south), suitable for hosting events and celebrations outdoors and overlooking the neighborhood and the city of Civitavecchia. The internal spatial plot, set on a circular plan, appears to be elaborated through the concatenation of geometric volumes added and subtracted to define a Greek cross layout. The liturgical fires are made of onyx stone from Turkey, carefully selected in the choice of veins. The altar, the ambo, the seat and the baptistery follow the same architectural lines as the church, based on the simplicity of the volumes with a tapered base at 45 degrees. The octagonal baptistery is located in the center of a circular colonnade consisting of 8 columns that form the base of the bell tower. The baptismal font is also designed for the celebration of immersion rites. Particular attention was given to the study of the presbytery, distinguished from the nave by flooring in yellow Tivoli travertine, characterized by the semicircular apse made of alabaster with a predominantly horizontal scansion of the slabs. The plot made up of variable modules is repeated in the design of the doors and interior of the church. The metal structure that supports the alabaster slabs has a larger profile in the vertical axis that forms the background of the suspended Crucifix, placed at the front, marking its upward direction, created by the sculptor Piero Cosentino. 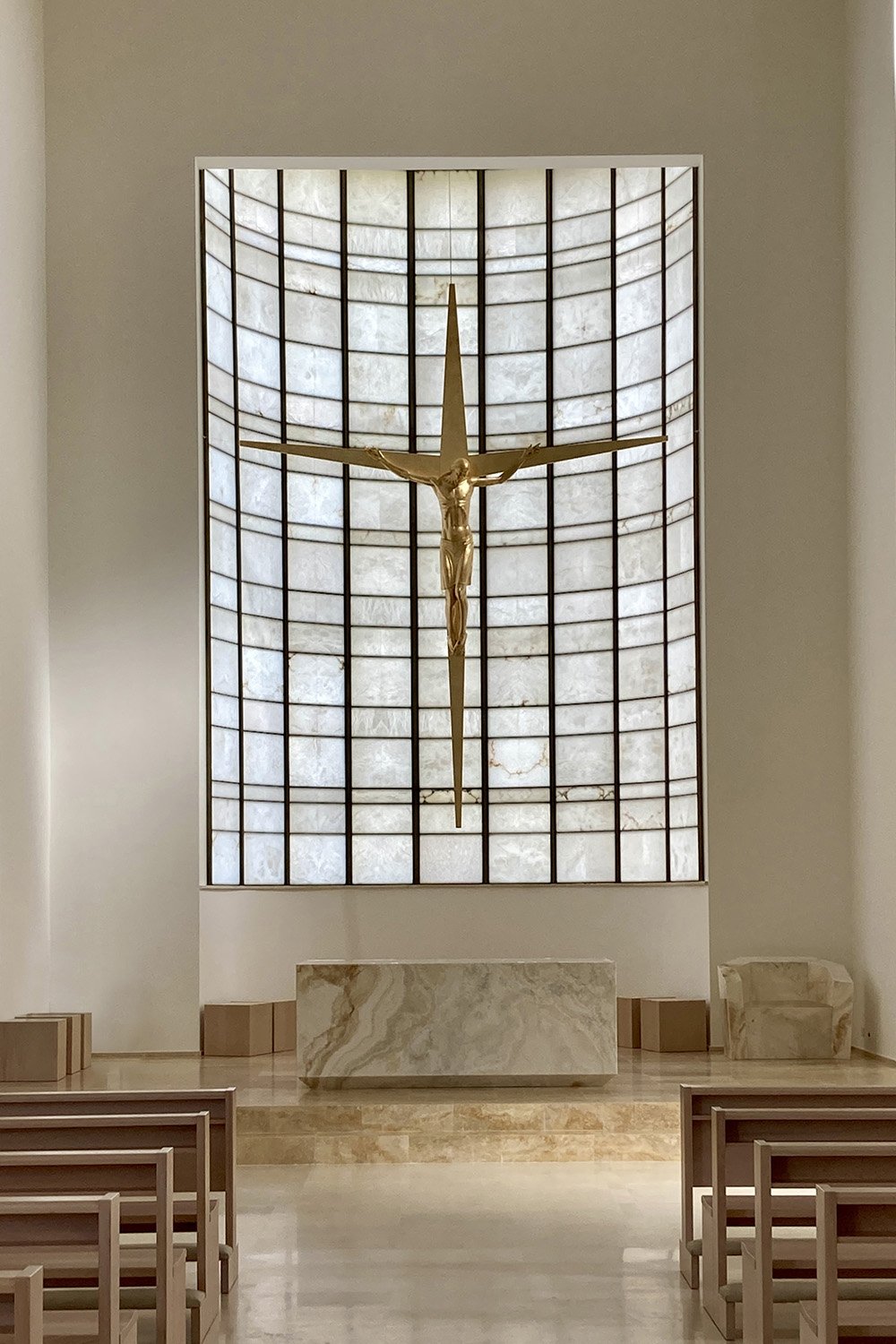 Enza Evangelista is an architect who completed her postgraduate studies with Master's degrees in Urban Design (Oxford Brookes University), in Architectural Restoration, Urban and Environmental Building Recovery (Roma Tre University) and in Design of New Churches and Liturgical Adaptation (Sapienza University). In 2000, she established an architectural firm that has since developed projects of urban regeneration and enhancement of historical assets through contemporary architectural interventions. Recent redevelopment projects include the recovery of the Antica Rocca Monumental Complex in the historic port, the Frasca-Mattonara Archaeological Park (Civitavecchia), the redevelopment of the Castrum Novum archaeological area (S. Marinella) and the conservative restoration and redevelopment of the Torre Flavia Monumental Complex (Ladispoli). For the most part, recovery as well as new construction projects concern ecclesiastical buildings and properties, such as the S. Liborio Church.