We are located in Kenya, a region of subSaharan Africa, precisely to the west in an area called Nyanza. The peculiarity of this place is given by the presence of Lake Victoria, which is the largest lake on the continent. Located on a plateau in the western part of the Rift Valley, the lake is internationally well known for its high levels of freshwater species diversity and endemism, which are of crucial importance to local livelihoods and fot the national economies inside the basin. A strip of land extends over this lake where the town of Nyandiwa is located, the place where my project was conceived: a “New Administrative Center” including the town hall and the police station.
The project will persist within the central area of Nyandiwa, namely the Duka. Therefore, starting from a fairly regular shape of the reference batch, I "alienated" and subtracted the central part of it, concentrating its functions inside, while the entire perimeter of the batch will correspond to a large portico. All main functions are inserted within 3 blocks, which through a further analysis and identification of the space, are modeled according to the portico. The two main elements of my project, namely the portico and the blocks containing the functions, differ both in terms of design and material quality: the first was entirely designed in wood, also to give a sense of lightness and therefore of permeability; the second, on the contrary, is made entirely of masonry, conceived as a compact, limited and well-defined bulk.
From the layout it is easy to understand the strong relationship between the portico and the blocks. The intersection of the main axes creates lines that generate distinct and defined paths, thanks to which there is a distribution of the internal spaces even within the blocks themselves.
The Portico, as well as being an element with the function of connecting different spaces to each others, represents an element of path where spaces of convivialità are created, and a protection for the buildings or elements below. To minimize the use of materials, as well as for a purely economic aspect, for the porch I used a structure entirely made of wooden slats, with Y-shaped pillars anchored to a concrete floor. These even support a double system of beams arranged on two levels that support each other, as well as a subsequent secondary warping, on which the roof made of metal sheets is anchored. The double pitch roof varies its inclination according to the inclination of the blocks, to allow a greater exposure to natural light. In fact, the greater height of the latter makes it possible to illuminate all the interior spaces through splayed slits.
In block number 1 we find the Town Hall with two offices reserved for the mayor and deputy mayor of the town, a waiting room, an archive-warehouse, private services and a large conference room, also used for meetings. The entrances are marked by asymmetrical pivot gates along the axis dictated by the portico, while the main entrance is accessible via a sliding gate. One part of the block is entirely covered by the portico, precisely along the main axis that divides the internal space, the other part has its own and independent sheet metal cover, supported by a system of wooden beams and pillars anchored directly on the curbs of the internal load-bearing walls, and bracing with metal tie rods. The supporting structure is entirely made of masonry, with different geometries on the facade according to the functions contained within the blocks themselves: in the external part with regard to the portico, where the main functions are contained, these geometries are more compact to ensure greater confidentiality but, in order to allow natural ventilation, these rotate, thus piercing the surface; in the part below the portico, on the other hand, the entire surface is always perforated and never compact, thus allowing a particular lighting effect within the architecture. The bricks, in addition to rotating, translate in some points, protruding from the surface of the facade, thus creating greater shadow plays.
In block number 2 we find the Police Station containing the offices for 6 law enforcement agencies, a cell, a waiting room, private toilets, changing rooms with showers and an archive / warehouse. The part of the block outside the portico is made with the same structure of the external block of the town hall. The part below the portico is an exception, as in addition to containing the waiting room, it contains private rooms, which must maintain a certain privacy, therefore guaranteed by an autonomous cover formed by wooden strips that support the tables, also in wood. The treatment of the surface also varies, resulting more compact and, in order to allow a greater ventilation of the rooms, in some parts it is deprived of some bricks. These particularities can be found in block number 3, the smallest, containing the public toilets inside.
My project proposal for the new administrative center of Nyandiwa is therefore aimed at creating an eco-sustainable structure, with minimal environmental impact, as well as economic, which manages to integrate perfectly with the surrounding environment without altering its shape and, above all, improving its architectural quality. 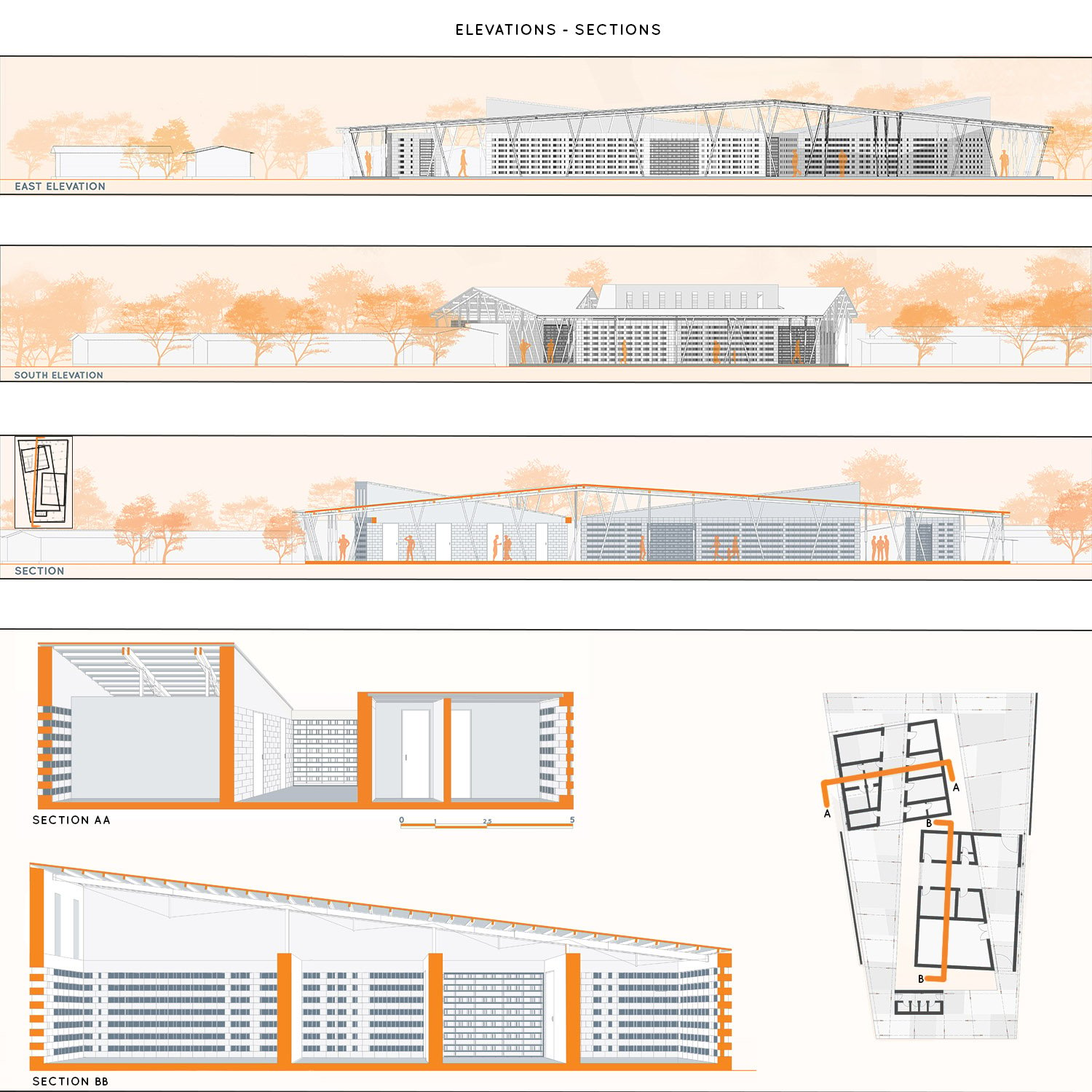 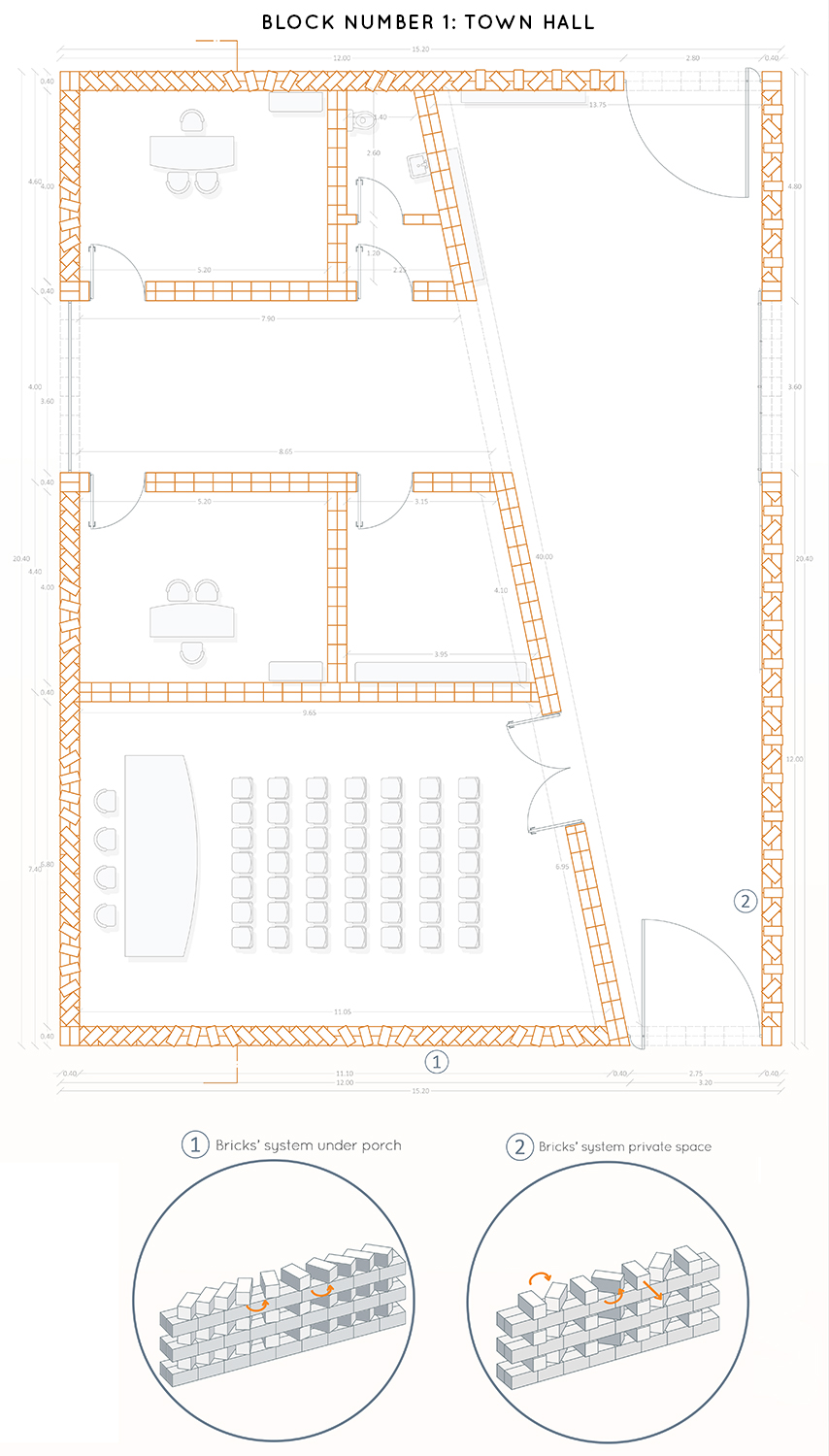 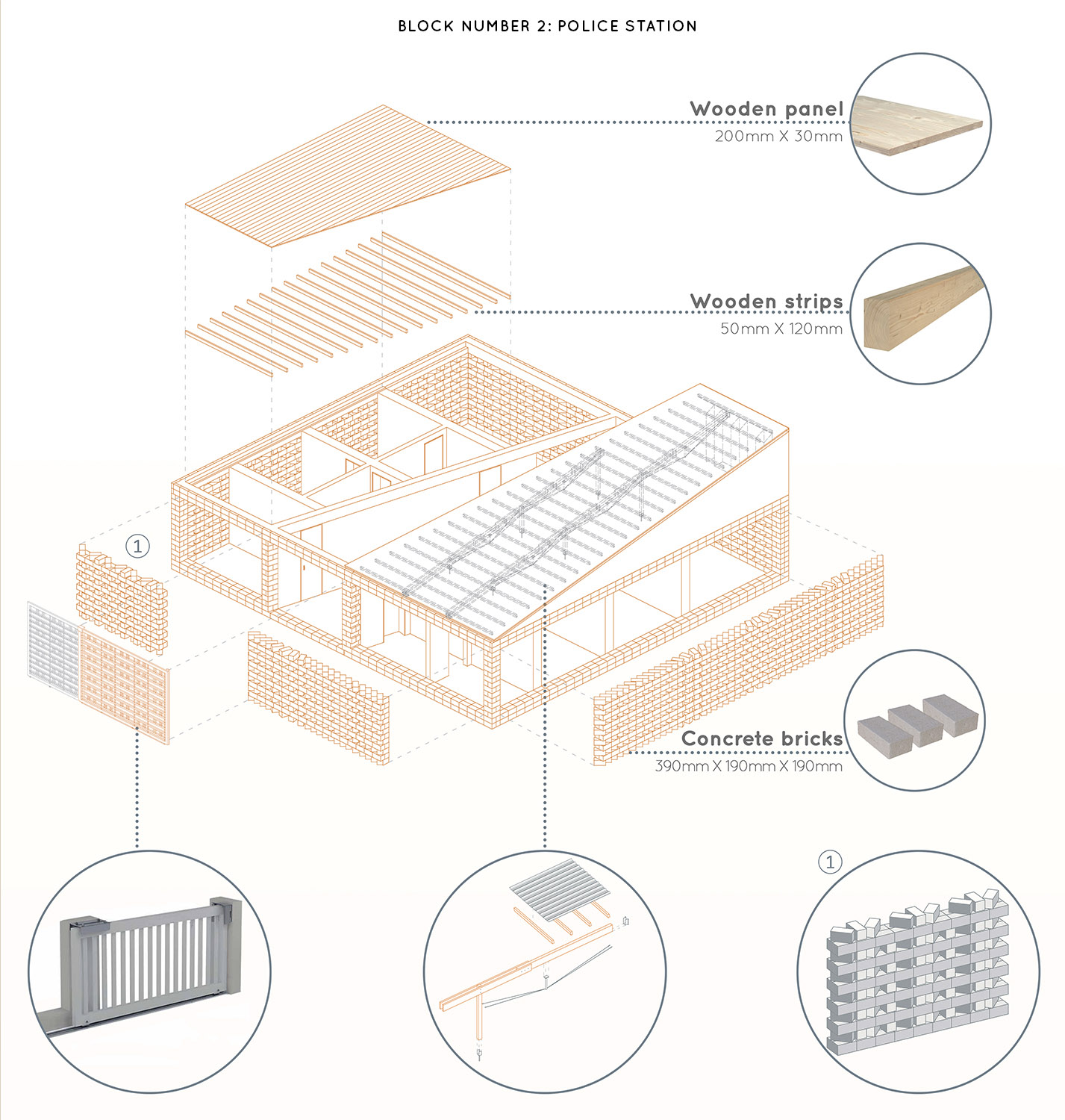 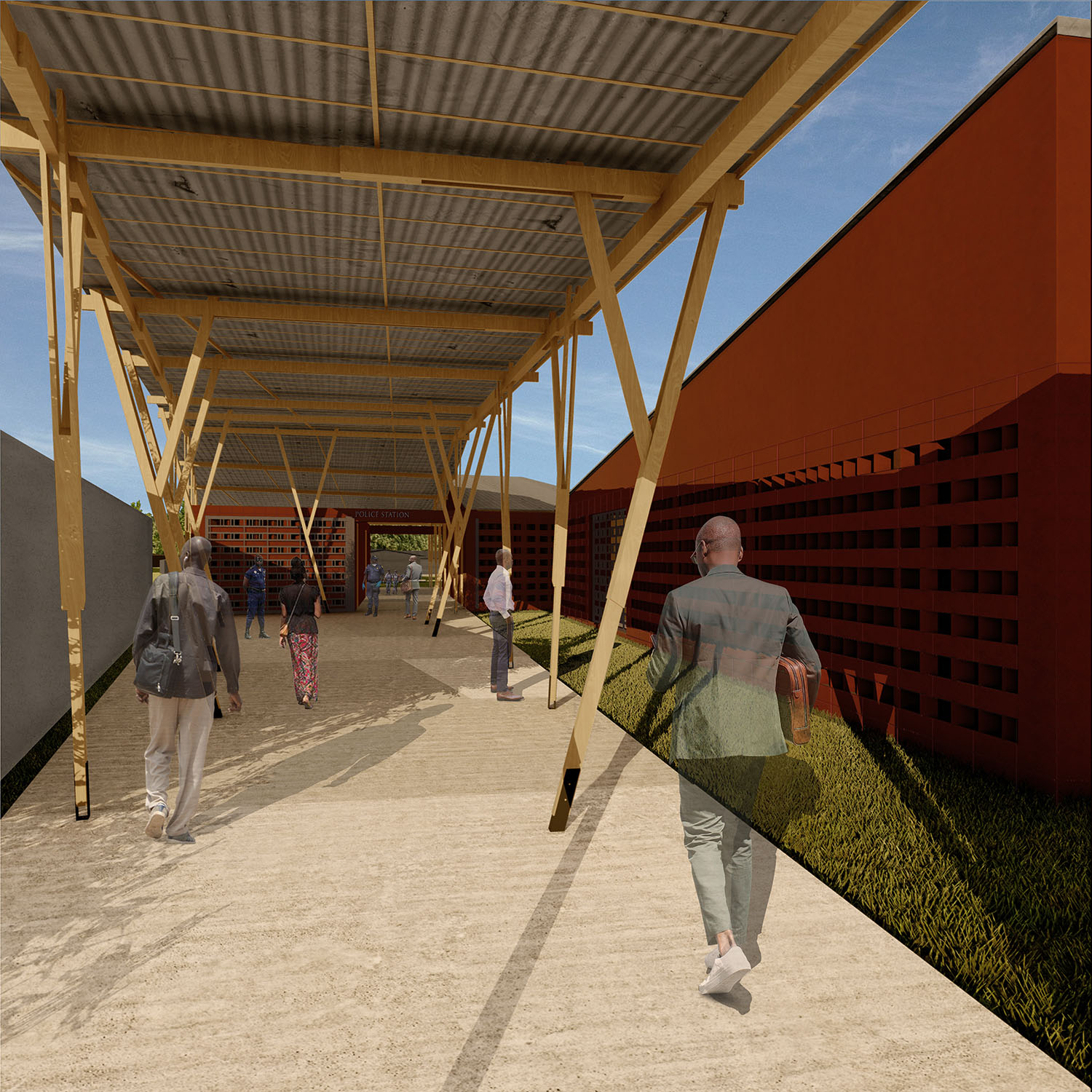 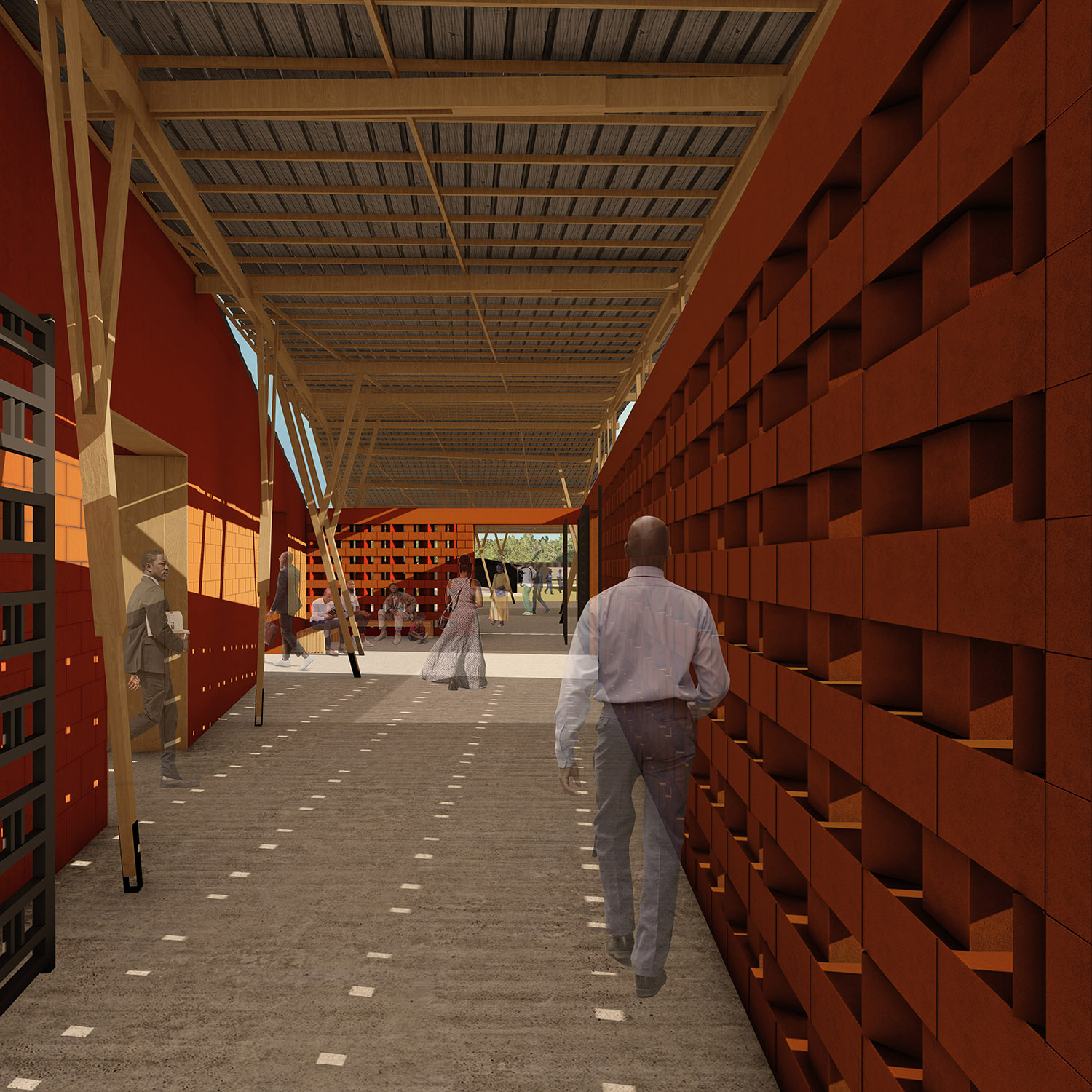