Impronte Sacre, a new architecture for the social integration and religious pluralism Introduction_The project “Impronte Sacre” has as its programmatic aim, the social integration and religious pluralism by bringing together the three monotheistic faiths, (Judaism, Christianity and Islam), which have profoundly marked the history, events, and identity of the Mediterranean populations. The architectural solution is part of a landscape system strongly integrated with the original environment in a synthesis of nature, landscape, religion and culture. The project’s area is located in Castelnuovo di Porto (historical town in the north of Rome, perched on a hill and integrated in a naturalistic green environment) in an uncontaminated area, enclosed between two sides, in close connection with the medieval castle and the walls. The “new centrality” achieved, renovate the whole life of the municipality and brings the Roman wash-house of the 4th century b.C, located at the foot of the fortress, back to new value. It is starting from these two elements (history and nature) that the project comes to life: born from the soil, its conformation and its stratifications, it integrates into the landscape and dissolves in it, until it emerges from the ancient buildings, enhancing them.

The project_ The focus of the project is to bring to light the ancient ruins and activate a path of continuity between the castle and the wash-house, lost nowadays, creating new pedestrian and cycle connections within the green system that often due to contour lines and important heights it is inaccessible. The new paths transforms the green gorge into a connection hinge between the two sides, attributing a sense of union and connection: the result is a multifunctional space consisting of a service center and three sacred volumes intended for sharing, for the knowledge and for sacredness. The building that host the service center (library, multifunctional rooms, auditorium and guesthouse) is a semi-underground volume, embedded in the ground with a green roof that blends with the original environment, enhancing the naturalistic system. The shape of the service’s center follows a “natural” line, according to the contour lines, and houses several patios, positioned at strategic points that mark the functional division inside and allow the surrounding green areas to penetrate the building. The sacred volumes instead stand out in the green and do not blend with it; they are also easily recognizable from the historic center and are accessible via a series of paths in the park. The structural solution that allows to support the halls of worship without burdening the existing wash-house provides for a reticular structure anchored to steel pillars, located in the embankment. The entrance to the prayer halls is through walkways on double-height rooms that increase the perception of suspension of the classrooms and overlook the temporary exhibition room set up in the wash house.
The main themes that have been addressed in the project are inspired by the natural elements. (water, air, earth, light). The two bodies conceived conceptually in contrast (the volumes suspended in the void (air) refer to the divine while the service center is embedded in the ground (earth), as proof of its human value), interact with each other and look at each other, creating places of exchange and meeting. For the cladding of the service center, strips of different types of wood were used which give a vibrant effect to the wall and which blend well into the natural landscape. The halls of worship were designed in Corten, a material that integrates the new with the old par in an excellent way. The cladding of the three buildings is identical in order to keep them homogeneous, but the classrooms are recognizable from the outside through the different orientations, peculiar to each religion. The internal part, on the other hand, was designed and developed ad hoc on the basis of the specific needs of the different religions. The different conformation of the classrooms is enhanced by the implementation of fixed and mobile furniture, but also by the use of light. The theme of light is of great importance as coordinated with the shadows it creates places suitable for prayer, for recollection, giving the spaces intimacy and connection with the divine.
The light intervenes in a natural way in the external spaces and instead in a filtered, declined and suffused way up to the classrooms; silence envelops the places reserved for meditation in contrast with the more thunderous sounds of the places of relationship.

The zenith and direct light comes from skylights placed on the roof that allow entry to a strong light that emphasizes the most important elements of the room (the altar, the ambo, the sacred wardrobe, etc.). The indirect, suffused light comes instead by slits on the back walls, that are designed accordingly to the religion of the classroom. The solid wall is designed ad hoc for each classroom based on the symbolism of the three religions: the Star of David for the Jewish classroom, the half-moon for the Muslim classroom and the cross for the Christian classroom. A light slot is also inserted at the bottom allowing the connection with the surrounding environment thanks to the presence of lush and spontaneous vegetation that emerges from the roof of the wash house.

In conclusion, the element of water, common point, sacred and symbol of purification for all three religions, emerges from the existing source, passes through the wash house, softly touching the classrooms, and flows into the large mirror of water, symbol of integration among the various cultures and religions. 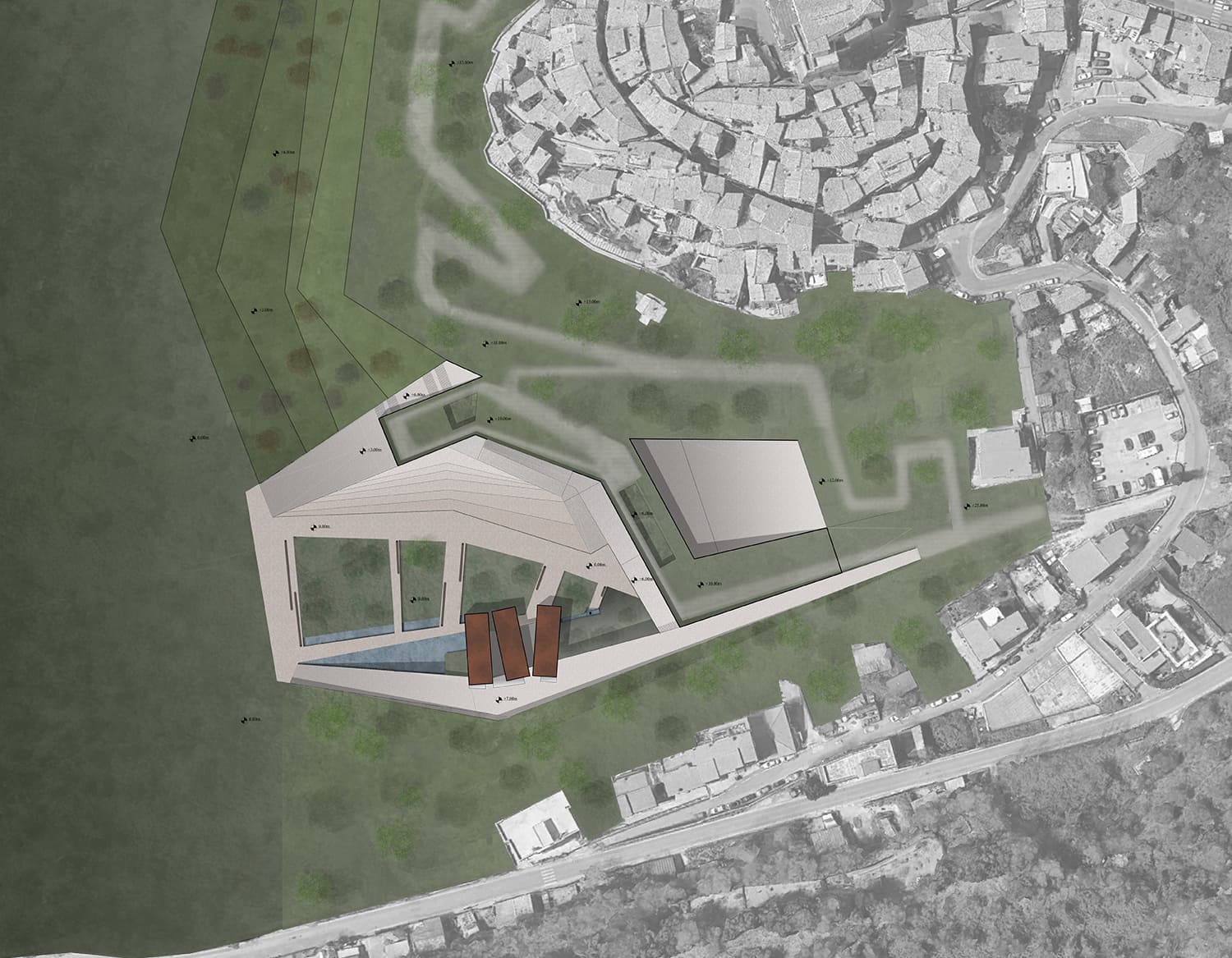 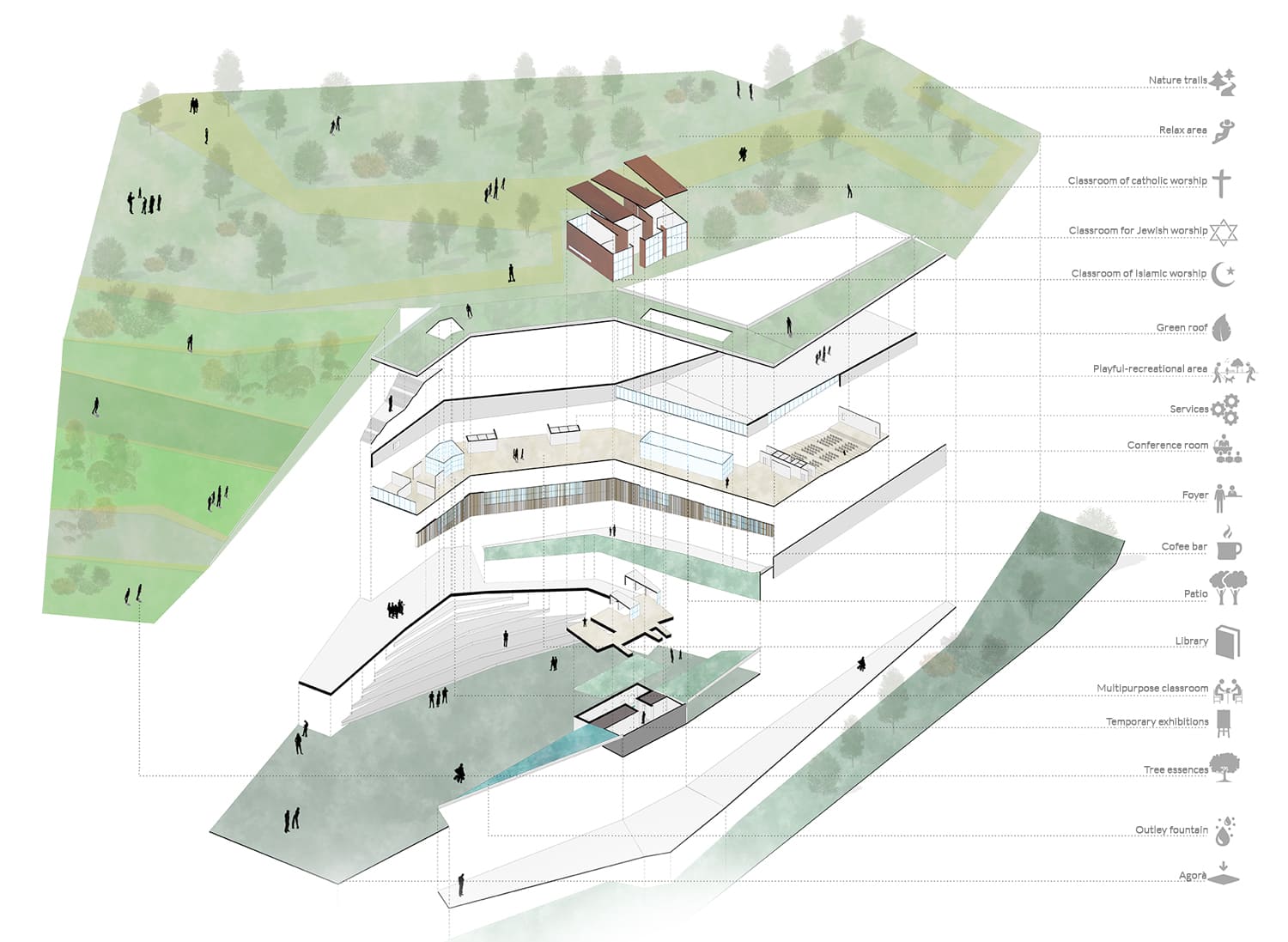 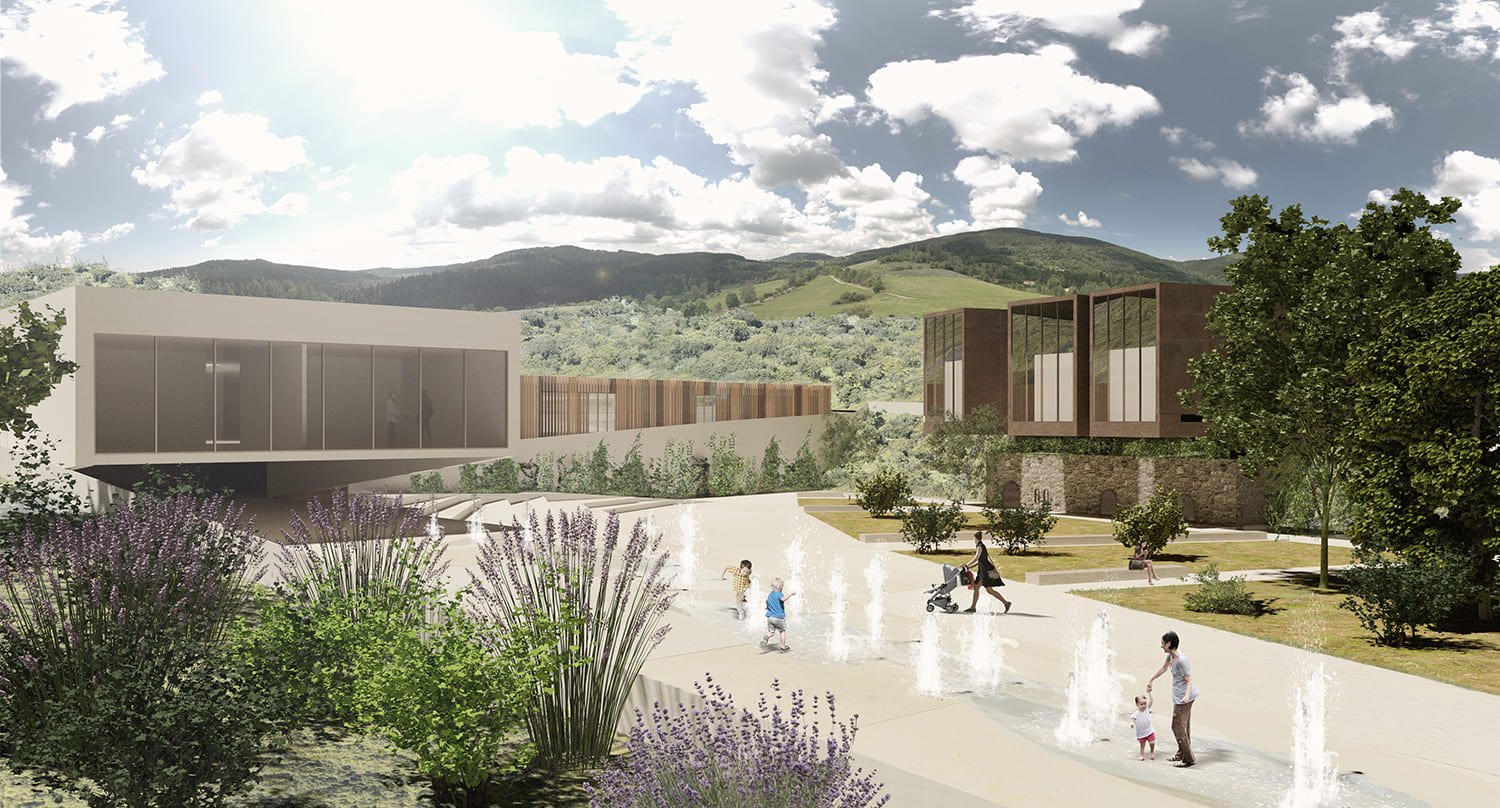 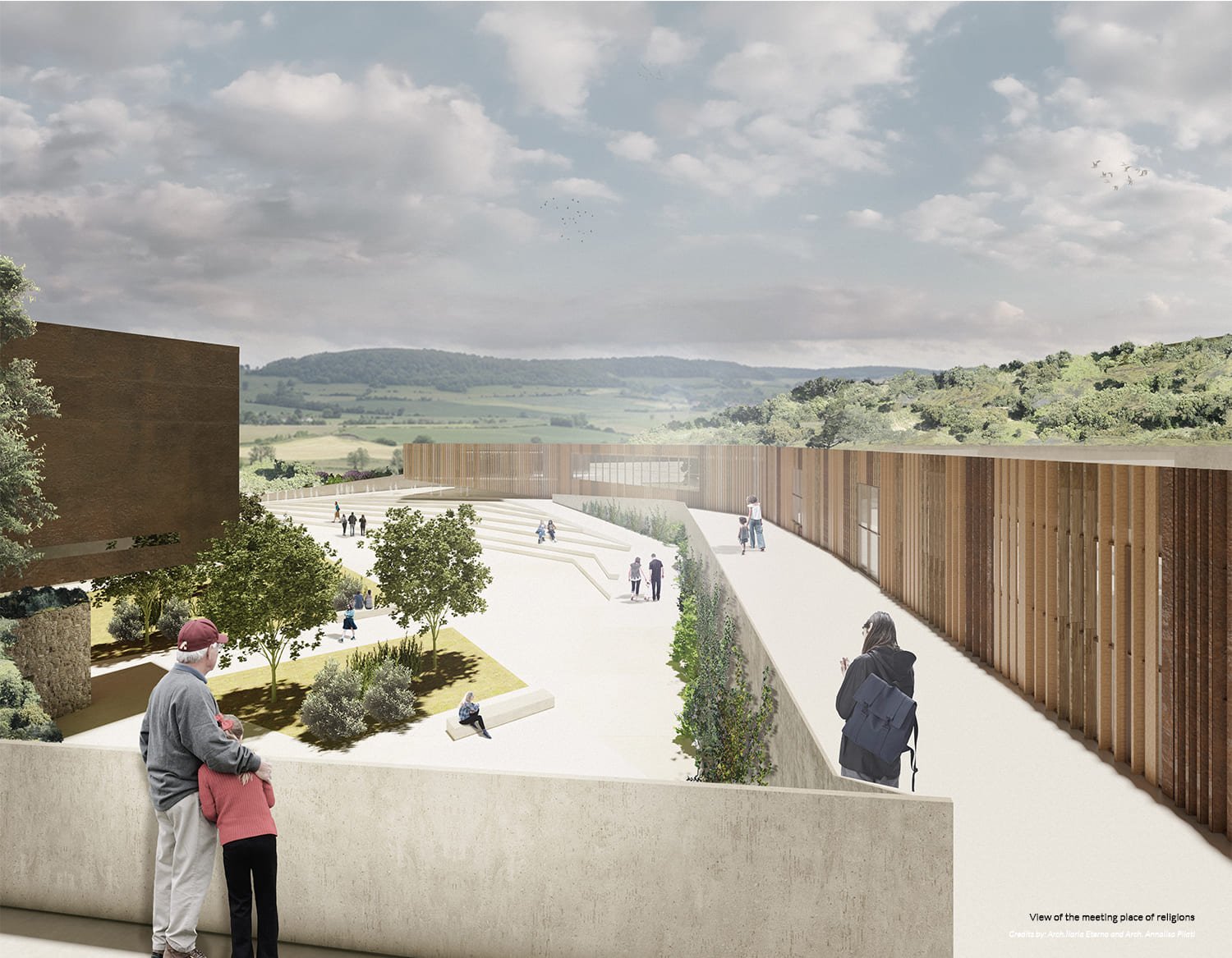 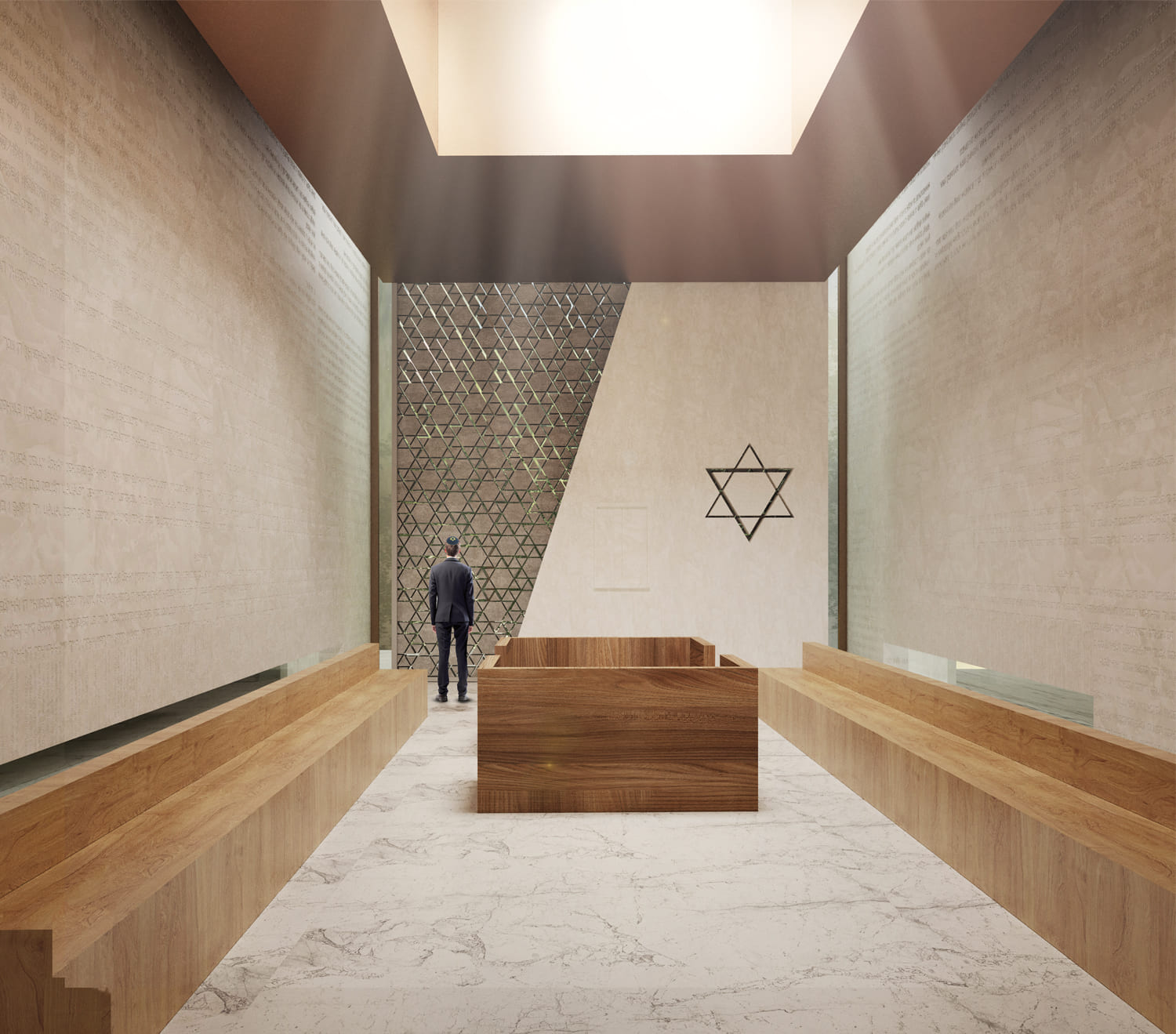