The curving promenade defines the identity of the Robert W. Wilson Overlook At the northern section of the Brooklyn Botanic Garden, the new Robert W. Wilson Overlook encompasses a 1.25-acre area with sweeping views across the Garden’s Cherry Esplanade, the Cranford Rose Garden, and the Japanese Hill-and-Pond Garden, among other areas. Formerly, this was one of the Garden’s most significant undeveloped sites: a berm shaped by the residual century-old debris left over from the Brooklyn Museum’s construction site. Taking design cues from the adjacent Diane H. and Joseph S. Steinberg Visitor Center, the Overlook has been reimagined, reconstructed, and replanted in its entirety to transform a steep and unusable slope into an immersive landscape that brings new life, accessibility, and a subsurface drainage system to one of Garden’s most extraordinary vistas.
The design for the Overlook introduces a meandering switchback promenade with sculptural retaining walls, consisting of 299 unique precast panels of exposed aggregate concrete. Paths and panels contribute to the stabilization of the berm, which over the past century had become increasingly unstable. All stormwater is retained within project limits, preserving water for irrigation, preventing further overtaxing of New York City’s sewage system, and helping keep waterways clean. Connecting the 26 feet of vertical drop from top and bottom of the Overlook’s hillside, the promenade provides a much-needed, fully accessible route between key areas of the garden. This includes a wheelchair-accessible link between the Visitor Center entrance and the subway-adjacent entrance on Eastern Parkway.
Directly addressing the accessibility limitations of major portions of the garden, the curving promenade leading from Cherry Esplanade to the top of the Overlook has been designed to accommodate visitors of all abilities and offer 315 linear feet total of seating. The former Overlook site provided inadequate access between its upper pathway and Cherry Esplanade. Today, the accessible new route encourages visitor engagement with the garden’s landscape through the creation of communal gathering spaces and new vantage points. The promenade and landings run the length of 680 linear feet. Choreographing the movement of the slope, critical vantage points highlight a selection of curated settings: The Rose Garden, the Esplanade, the Hill-and-Pond Garden. The Overlook welcomes every person or group imaginable—an improvement in accessibility but also in the quality of experience. Visitors move among the fragrance of herbs, the shifting of grasses, and flourishing crepe-myrtle trees; they now gaze out into the garden in a way that was not formerly possible.

The design of the Overlook creates a coherent identity alongside the newly constructed Visitor Center by transforming this “orphaned” site. Striking visual planes and the ever-evolving landscape of the Overlook compliment the curvilinear geometries of the Visitor Center and add to the Garden’s inherent drama throughout the four seasons. More than a dynamic vantage point, the new Overlook is a garden in itself: its design introduces over 40,000 new plants into the Brooklyn Botanic Garden’s collection. This landscape is defined by flowering crepe-myrtle trees and an immersive four-season planting scheme of ornamental grasses and perennials. In a seasonal counterpoint to the Garden’s famous spring cherry blossom display, the Overlook’s crepe-myrtle collection, which added 34 crepe-myrtles to the Garden’s existing collection, offers a soft-colored floral show in late summer, vibrant foliage in autumn, and intricately patterned exfoliating cinnamon bark that extends the trees’ visual appeal into winter.
New native grass and perennial plantings form a nearly continuous ribbon of gardens, each offering a distinct interpretation of a meadow’s form and function. The Overlook gathers grasses and perennials from across North America and assembles them based on the layered structure of a meadow, combining their diverse survival strategies to create a resilient plant community. For visitors, fine textured plantings move gently in the wind, offer a long season of beauty, and engage visitors both up close as well as from the Cherry Esplanade. The native grasses and perennials combine to form a robust, resilient ecosystem that evolves over time, inviting a diversity of insect and butterfly life, and building healthy, erosion-resistant soils. Several of the more recognizable and fragrant herbs are planted in locations which adults and children can reach to experience a multi-sensory, haptic engagement with the garden.
Trees, flowers, and grasses are accessible to visitors, meandering pathways immerse wanderers within the Overlook—both up close amongst the plantings, and at a distance, as sweeping views. Universal access to a rich sensory and visual experience are at the forefront of the Robert W. Wilson Overlook, foregrounding the value of accessibility and open space which is increasingly crucial in a post-pandemic world. As we design our public spaces in a post-pandemic world, questions of equity and accessibility are opportunities to enrich and expand the missions of our institutions. 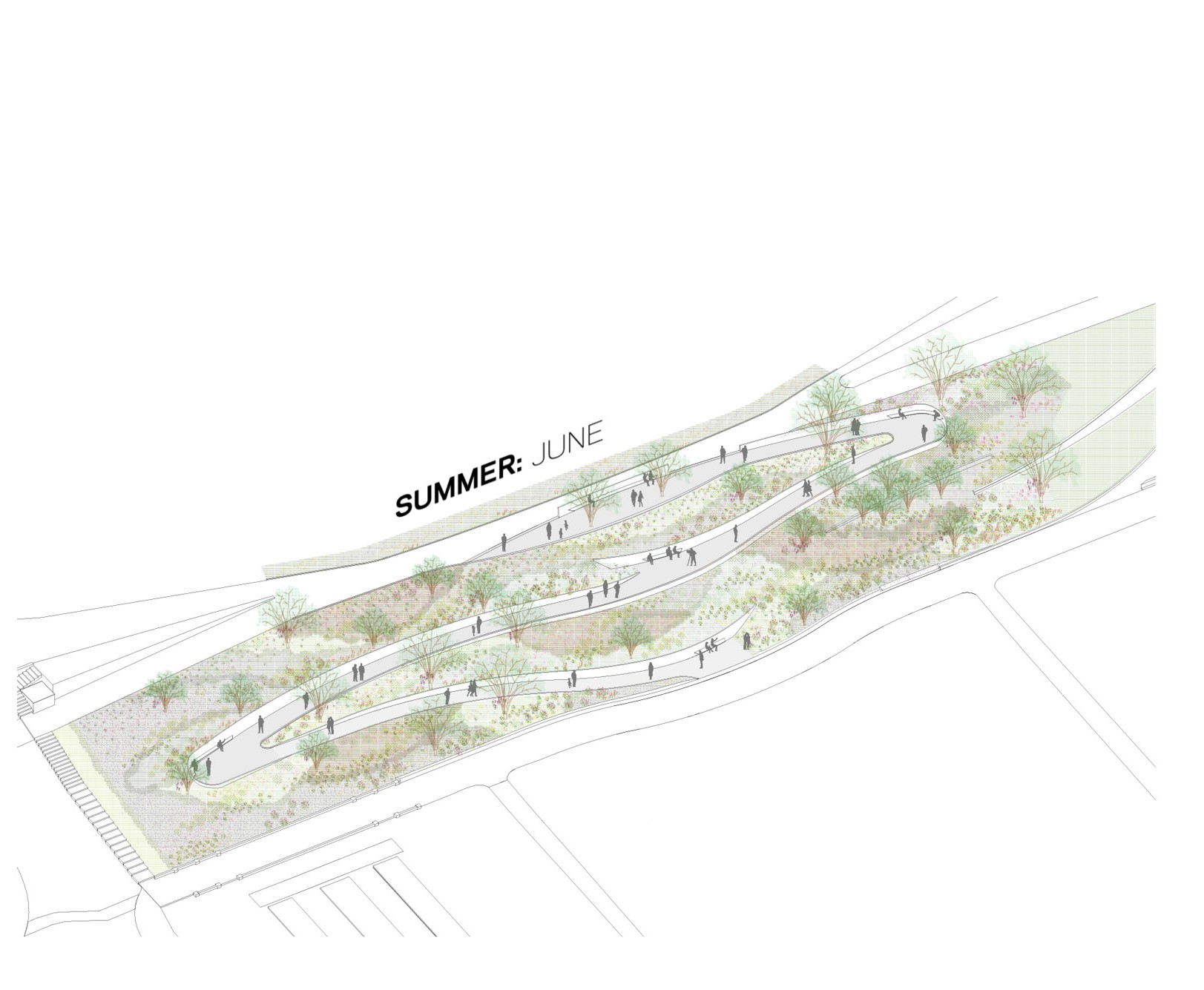