The renovation of a disused factory in the centre of Turin, at the foot of the Mole Antonelliana, becomes an opportunity to reconfigure this portion of the urban fabric:
Being called upon to renovate an old factory and transform it into housing is certainly a great challenge, especially if the building is located in the centre of the urban area of Turin near the Mole Antonelliana, the historic architectural symbol of the city and home to the National Museum of Cinema.
The area in which the building is located is mainly residential, and has a variety of 19th century buildings and numerous condominium buildings built between the 1950s and 1970s. A famous example of the latter is the "Bottega d'Erasmo", designed by the architects Roberto Gabetti and Aimaro Isola in 1956 and facing the building object of the intervention. The history: The building, which dates back to the second half of the 19th century, was for a long time a metalworking factory with an adjoining residential area. Subsequently, it underwent a series of transformations until the early 2000s, when it was disused and abandoned. The primary objective of the renovation project, done by the Turin-based architectural studio G*AA-Giaquinto Architetti Associati, was to alter the appearance of the existing building as little as possible and to respect the municipal regulations and the aesthetics of the surrounding area. The close proximity of the Mole Antonelliana is certainly a positive element capable of determining added value in positioning the building in the real estate market, but it is also an important presence to be reckoned within the design phase. The proximity to the historic building has essentially determined the need to maintain the hierarchical balance between the monument and the residential building. The height of the building was remodelled without actually raising it, and respecting the existing volumes and features. The building, mainly residential and with customisedapartments of different sizes, has a unique internal layout and an exclusive view of the Mole. On the ground floor there is also a contemporary art gallery whose large windows highlight the renovation of the original vaulted rooms. In addition, the theme of lighting comfort has been developed not only by making the most of the existing external openings, but also by creating a series of skylights and a light chimney which allow a view of the Mole Antonelliana even from the first floor through visual telescopes.

THE ROOF AS A CHARACTERIZING ELEMENT OF THE INTERVENTION
The new roof is the focal point of the project: we opted for a contemporary look, while still respecting the context and the encumbrances of the existing building. The structure in glued laminated wood beams has been insulated by interposing wood fibre panels of different density (total thickness of 15 cm). Internally the roof has been acoustically insulated with a sound-absorbing panel and, at last, it has been covered with a sheet of titanium zinc plate with double seaming and bordered by a darker metal band that determines the visual detachment. The same stratigraphy has been used to create the roofs and the side walls of the dormer windows.
Windows and doors: Another mportant choice relates to the windows and doors, which have been designed to suit the exposure and with a minimum transmittance of 1.1 WW/sq k, low-emission glass and integrated mechanised and adjustable double-glazed shading systems. Different shading systems were also included for each type of window (external blinds for velux, internal blinds for the greenhouse and Venetian blinds integrated in the frames).
THE PROJECT OF THE FACADES The walls of the courtyard area, partly original in solid bricks, partly integrated by 30 cm porized brick blocks, have been insulated with rock wool panels. On the street side, the pre-existing openings have been maintained and, thanks to the documentation found in the historical archives of the City of Turin, the original decoration has been brought back. On the fronts inside the courtyard, the balconies originally configured as "ballatoi" have been enlarged and a series of dormer windows and skylights have been opened on the roof slopes, in order to create new and exceptional views of the Mole
PLANT SYSTEM Thermal energy is produced using an air source heat pump and a condensing boiler located in the technical rooms of the basement which work either in parallel or individually depending on external climatic conditions. Domestic hot water can be produced either by the heat pump, which works in priority on DHW production, or by the condensing boiler. The air treatment is managed by the controlled mechanical ventilation system, which allows to recover the thermal energy contained in the air taken from bathrooms and kitchens and to dehumidify the air in summer, maintaining all year round a condition of internal comfort. A radiant floor panels system has been used for the heating and cooling of the building.
CASACLIMA CERTIFICATION (PROTOCOL R) Both in the design phase and in the construction phase, great attention was paid to the airtightness by using devices such as foams, tapes, liquid sealants and adhesives that have allowed to brilliantly pass the final Blower Door test, a result not so obvious in a renovation. Riberi 6 is the first example of a renovation of a historic urban building in Turin to have obtained the CasaClima R certification. Riberi 6 has been awarded the "Golden Cube" for the CasaClima award in 2020. 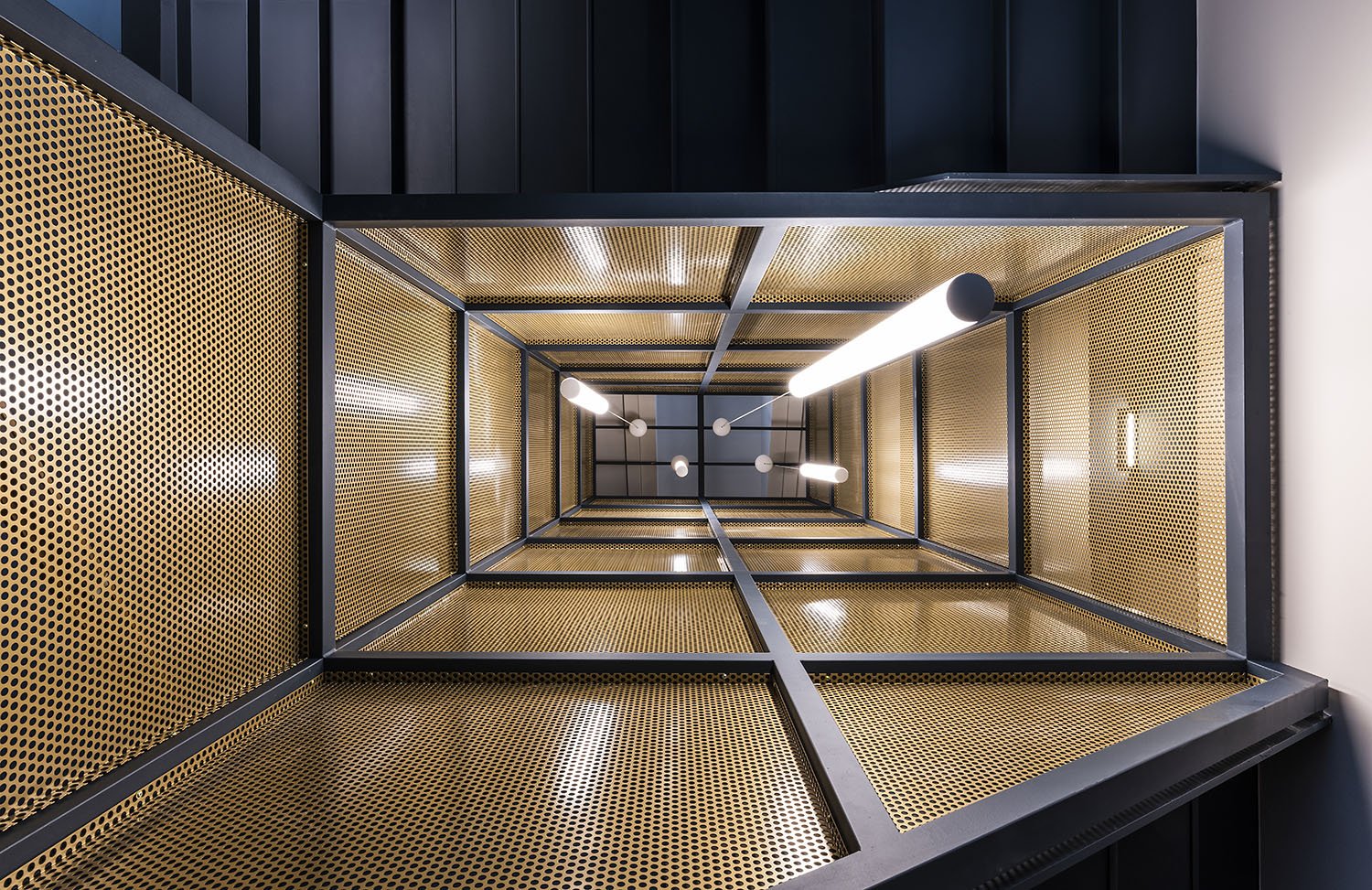 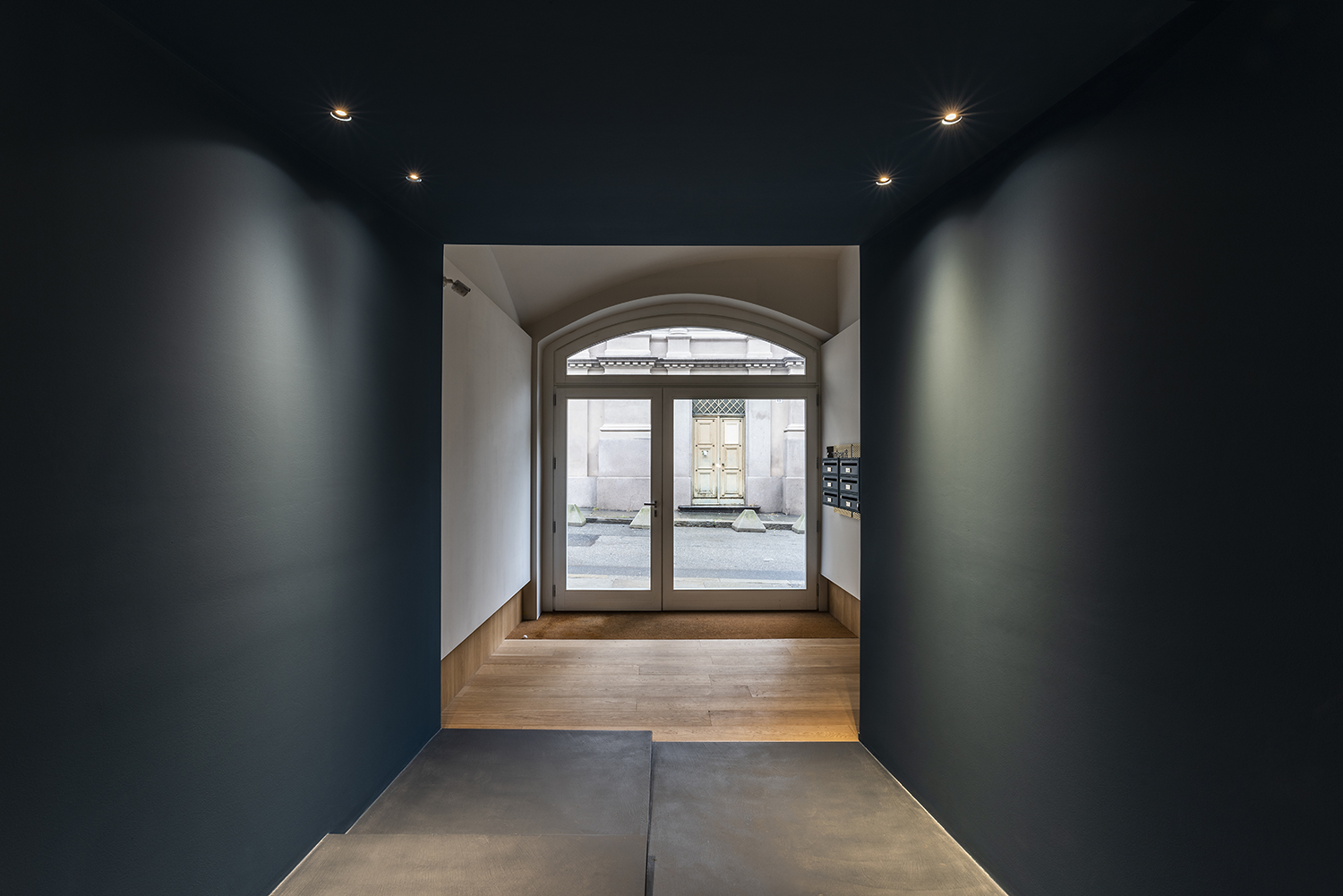