A parterre, a covered plaza and a roof garden: Piuarch’s design is organized around these three spaces, which form an uninterrupted sequence from the ground floor up to the top of the building. At ground level, the parterre connects the Human Technopole Headquarters with the other buildings of the Human Technopole Campus, including Palazzo Italia. An artificial landscape of inclined planes suggests a distinction between the movement areas and the rest areas, the amphitheaters. This open space, which in part also continues under the building, provides access directly to the fully glazed atrium, and from there to the covered plaza.
The latter is the true heart of the Human Technopole Headquarters, on a functional, relational and symbolic level. On the one hand, this gigantic, full-height empty space, flooded with natural light, is crossed by a system of ramps and walkways that connect all the building levels. At the same time, the covered plaza, which is overlooked by all the offices and laboratories, is a crucial space for interaction and the exchanging of ideas: the central stairs and various meeting areas make it an ideal place for dialogue and discussion between researchers. More in general, this interconnected, panoptic space is the architectural transcription of the values of an institution such as Human Technopole, which promotes scientific research as a highly ethical and “transparent” activity.
The roof garden is the natural complement to the covered plaza: here, the introverted “vertical campus” opens onto its surroundings and the city. The asymmetrical pitches of the roof alternate with greenery-planted slopes, steps and broad wooden platforms, multiplying the availability of multifunctional spaces, which can be freely appropriated by the users of the building. The view sweeps southeastward from the terraces toward the center of Milan; at the same time, the characteristic broken profile of its crown makes the Human Technopole Headquarters highly recognizable, a new architectural icon for the future MIND.
Set around the backbone of these three public and collective spaces are the offices and laboratories of the Human Technopole Headquarters, arranged in two distinct compact blocks, both parallel to the covered plaza. Within them, they are distributed according to maximum optimization and flexibility criteria: for example, many partitions are mobile, to allow rapid adaptation to the evolving needs of the research center.
The Human Technopole Headquarters, lastly, is conceived as a highly sustainable ecosystem. The greenery-covered areas at ground level and on the roof allow the correct management of rainwater. The photovoltaic systems installed on the shelters on the ground floor, on the facade and on the roof contribute significantly to the building’s energy needs. The angled sun shades along the façades calibrate the amount of sunlight entering in the different seasons of the year.
The outcome of an investment of 94 million euros, the Human Technopole Headquarters is a project that is fundamental for the future of Milan and of Italy. With its 35,000 square meters of space, 16,500 sq.m. of which devoted exclusively to laboratories, it is a testimony of the renewed centrality that scientific research must necessarily acquire in the country’s near future, and of the fundamental role that architecture plays in conceiving the spaces dedicated to this. 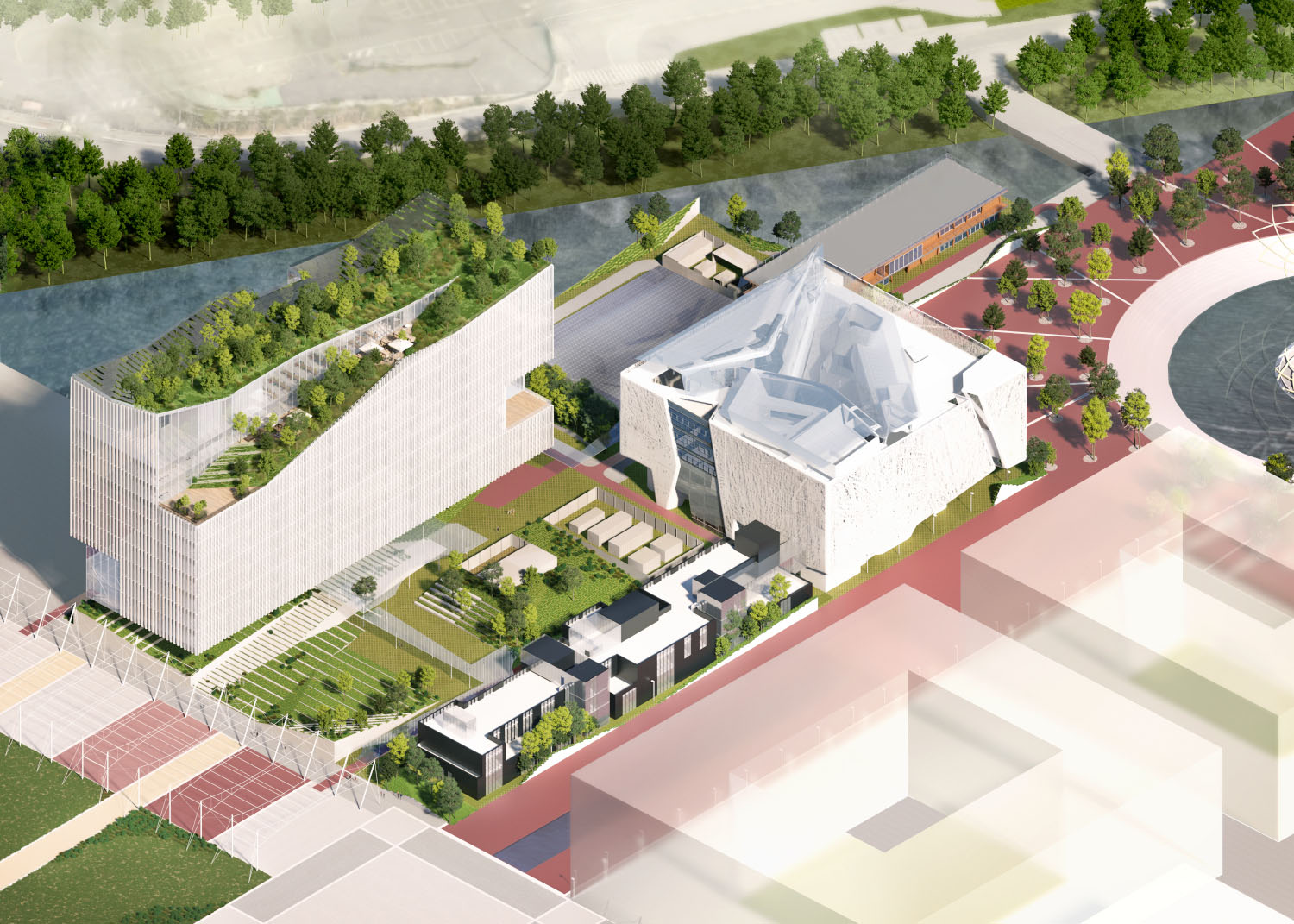 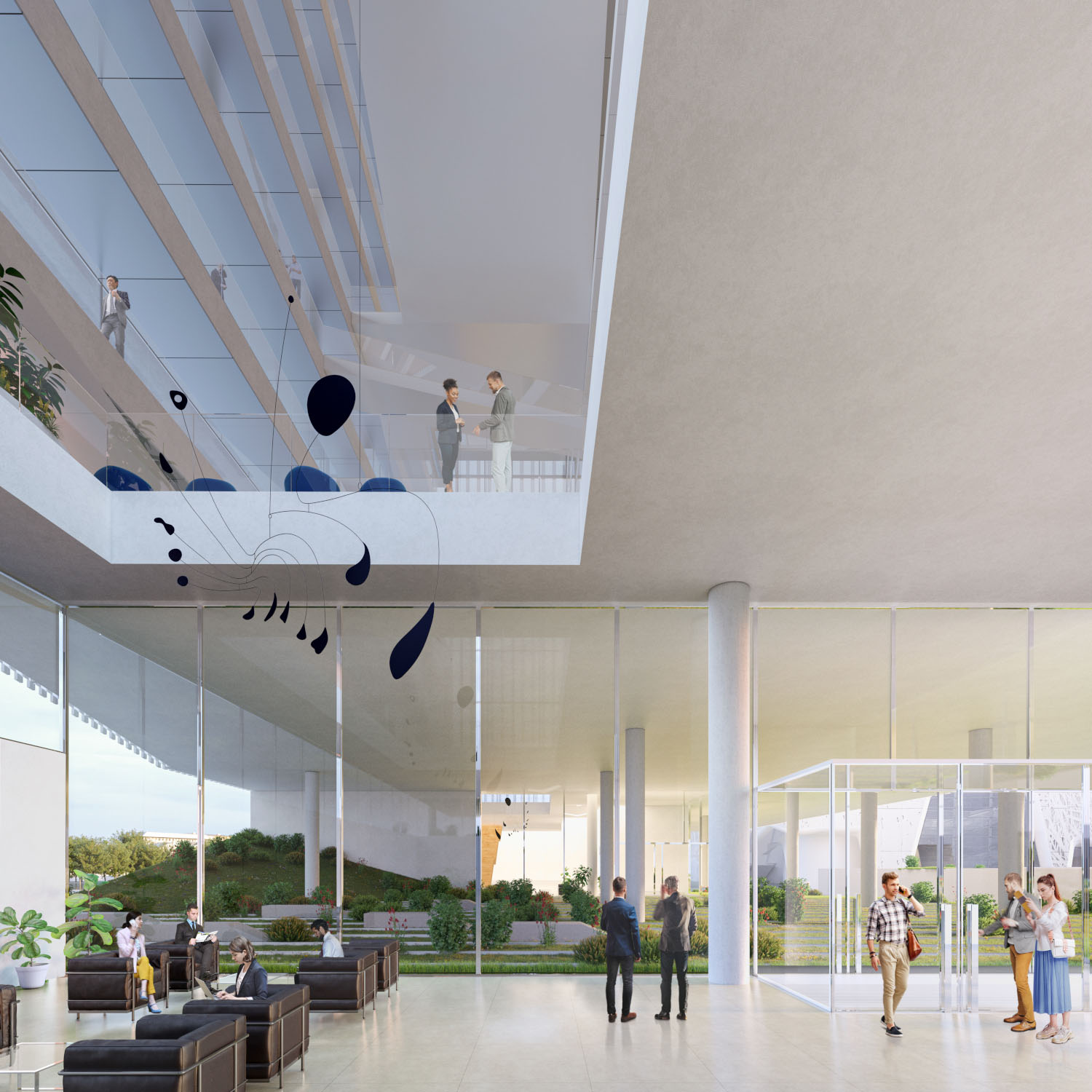 Founded in 1996 by Francesco Fresa, Germán Fuenmayor, Gino Garbellini and Monica Tricario, Piuarch works in the field of architecture, ranging from the design of office and retail buildings to the development of residential complexes and cultural recovery and urban renewal works, with attention constantly given to the values of environmental quality and the relationship with the context. Piuarch is a collective that finds its major power and force in its plurality and its ability to incorporate different view points and approaches in one single project. The firm is internationally known for its collaboration with some of the major international fashion brands alongside of which it has always experimented with social projects. The winner of the “2013 Italian Architect of the Year” prize, the studio has been exhibited several times at the Venice Biennale of Architecture and has obtained numerous publications and dedicated monographs.