The House Of 3 Streams, A House Woven In Landscape The topography of the land, the material memory of the surrounding forts, the light of the forest, and the deep-water discharging ravines have created a dominant palimpsest of contextual parameters onto which the house has been woven. As a home for 4 generations, it behaves like a condensed village, allowing for private and communal life. The flow of the large load-bearing wall that traces the ridge between two ravines anchors the proposal and establishes itself as a “found” element, resonating the contours and material of the walls of the Tungi and Lohgad forts to the east and north of the site. As the site flows to Pawna lake, so too does the house, picking clearings within the trees to capture the views of the lake. Formal planning strategies are incapable of absorbing the radical flow of the land and water and everything from the spatial quality to the material language echoes the spirit of the site. The wall ruptures at points where the Verandah bridges over the ravine and continues on into the forest to the second ravine beyond the ridge. Sleeping spaces are embedded in the forest while public spaces assume the mannerism of suspended flight to the north and east. The roof follows the topography of the perch points, tracing the path laid down by the hill; its language of fletched rafters and weathering zinc a natural foil to the robustness of the locally quarried basalt. Its contours reference the horizon and the hill. The deconstructed language of the tree-like structures that support the roof liberate the edges where shaded spaces and the forest merge.

Dispersion:
The house occupies vacant spaces between areas of dense vegetation to prevent the cutting of existing trees. This allows the natural flow to thrive and enhances the experiential contact between built space and nature, improves the micro-climate and amplifies the cooling effect of the prevailing breezes, ensuring that the entire house is 100% naturally ventilated.

Float: Existing mountain streams have been mapped and preserved to retain the pattern of water discharge during the monsoon. Parts of the house are built on a ridge between 2 such streams to maximize their cooling potential and one of the major Verandah floats over the stream like a bridge. This also amplifies the flow of wind through the house. The public areas towards the north and east (desirable orientations in this region) are porous verandahs with deep roof overhangs providing protection from direct sun and rain, but allowing continuous movement of the breeze and landscape/ trees

Embed: Effective thermal banking: The private spaces are banked into the southern edge of the main ridge, overlooking the large ravine/monsoon stream. A large stone wall running from south to north along the ridge binds these spaces but breaks open to allow east-west breezes and landscape to flow horizontally. The dense forest on the west, shades these spaces and the south west corner rises above the land to shield the house from the afternoon sun. The placement of two bedrooms below the pool ensures natural cooling, while the orientation of the pool along the axis of the spine allows the breeze to be cooled before travelling through the house. The elevation of the pool also minimizes the likelihood of rats/ frogs/ snakes in the warm/ dry summer months. 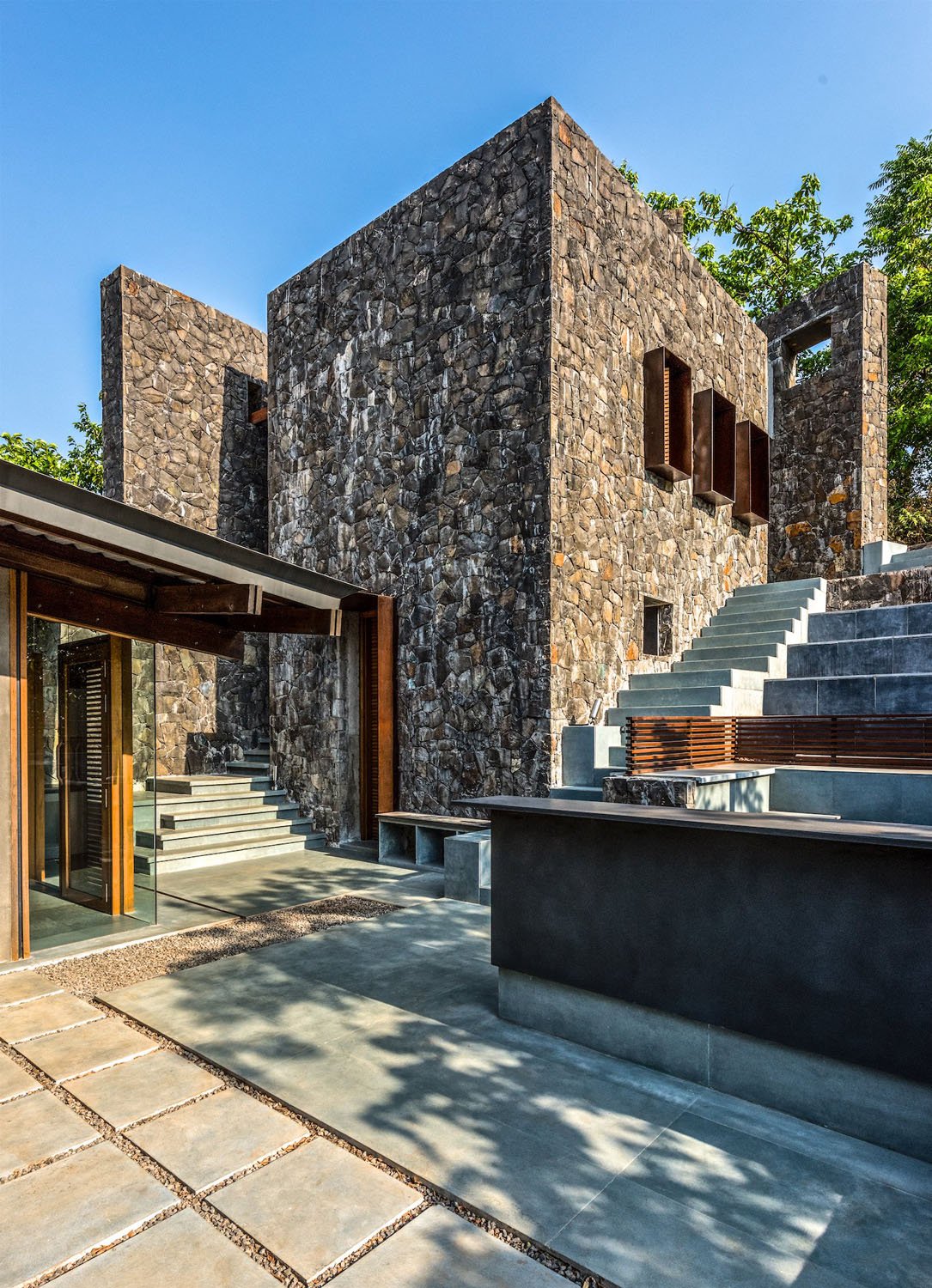 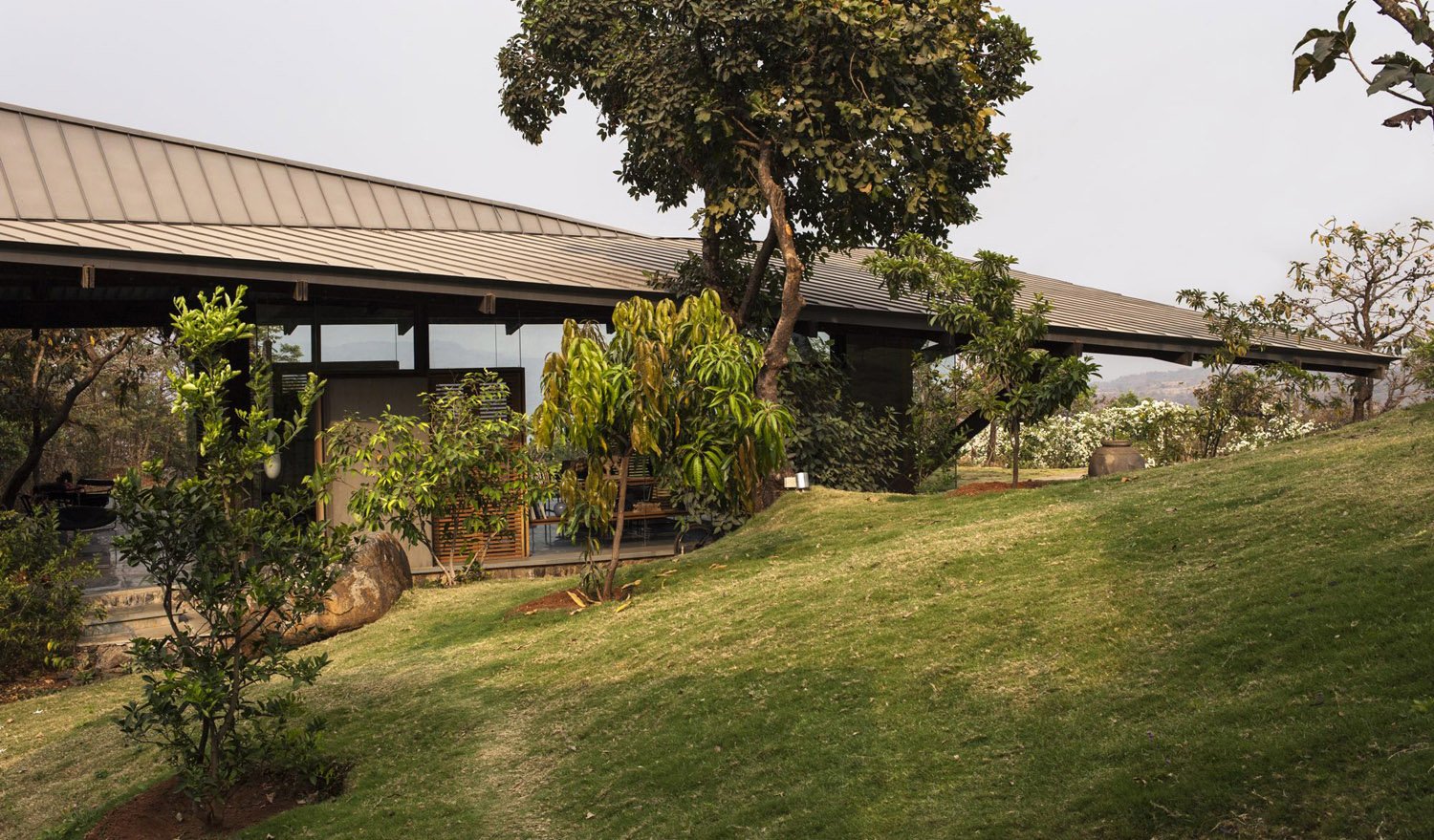 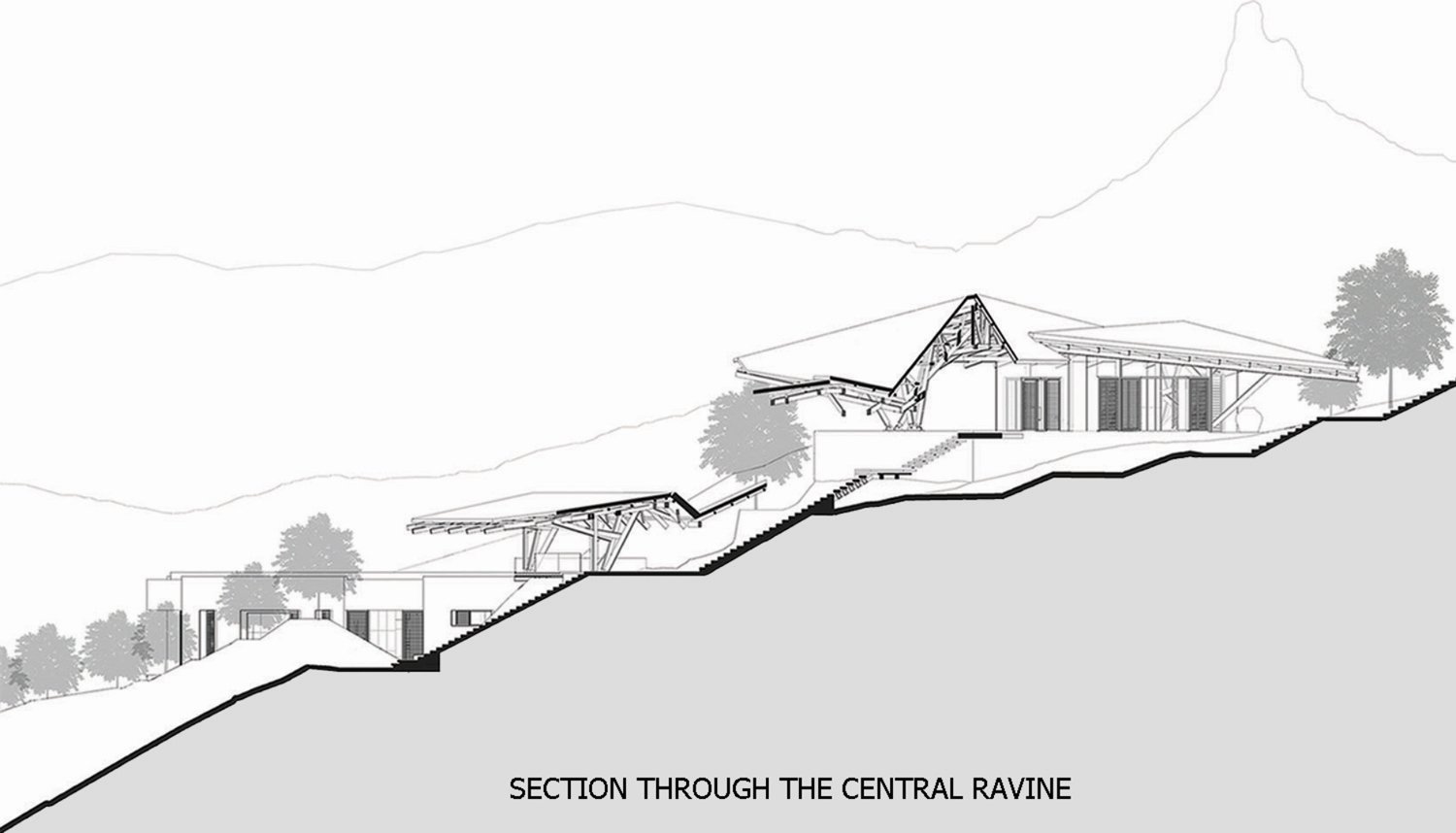 MALIK ARCHITECTURE is a 30-year-old design practice based in Mumbai. Founder and principal architect, Kamal Malik, was born and raised in the hills of North India and to this day, nature remains the source of his inspiration. He completed his studies at the School of Planning and Architecture (SPA), Delhi. He is a follower of the Patanjali school of yoga, concept of time, continuity, reflection and of silence through which a syntax of metaphors is developed, allowing him to comment on subjects ranging from urban decay and regeneration to the more intangible notions of homogeneity and purity. His son Arjun returned from Columbia University in 2005. There seemed to be a growing disdain for 'overly intellectualized architecture' and the work pointed towards the development of an idiom that would reconcile the intellectual and intuitive aspects of architecture, that would provide a tangible link to the past without getting nostalgic and would be technologically progressive.