Fenix I, the former warehouse is now a mixed-use space With almost 45000 m2 of mixed-use space, Fenix I is a bold and iconic building. Through the existing monumental Fenix warehouse, an immense steel table structure has been built, comprising of approximately one kiloton of steel. On top, a new concrete building has been created with loft apartments in various sizes. These lofts are developed entirely according to the buyers wishes in terms of size and lay-out, and in some cases divided over two floors. This loft concept with a high degree of flexibility and buyers’ influences is, on this scale, unique in Europe. The former warehouse is now a mixed-use space, with quay houses, offices, a public parking garage, B&B, catering facilities and an extensive culture cluster.

Fenix' history
The former so-called San Francisco warehouse, built in 1922 for the Holland America Line, was an impressive 360 meters long. Over the years, war and fire destroyed large parts of the warehouse. The warehouse was restored into two buildings, Fenix I and Fenix II. In the middle part the Fenixplein was realized. In the 1980s port activities moved westward and the warehouses fell into disuse. Examining the surrounding building volumes in 2007, when Rotterdam committed to transforming the district, it was decided to add volume on top of the warehouse.

Design
The design for Fenix I consists of three main parts. First, it comprises the existing San Francisco warehouse that has largely been redeveloped and renovated for mixed use. An interlayer consisting of a gigantic spaceframe structure separates the existing warehouse and new volume above. This layer has a clear height of 4m at the Rijnhaven side and 6m at the Veerlaan side. It accommodates loft apartments adjacent to a large courtyard garden. On top of this spaceframe a new enclosed building block arises, executed as a flexible concrete construction, with loft apartments of varying sizes and with 2.5 meters deep outdoor spaces all around. The gallery on the inside of the building block connects to a public passageway on street level.
The passage is a new inner street of 40 meters long, that runs right through the building, connecting the city side with the quay. This street is perhaps one of the most exciting spaces in Fenix, which best expresses the energy and kinetic intensity of the building's past and present and exposes the different layers of time. From the passage, the residents reach the secure and transparent entrance to the lofts. Four glass elevators lead the residents through the roof of the warehouse into the courtyard, which is characterized by light, greenery and transparency and forms a strong contrast with the strong industrial structures of the dockyard.
It was a conscious decision to use a gallery to access the loft apartments, as it encourages social interaction between the residents and creates an inclusive community. The courtyard is a calm oasis, emphasized by using different tones of wood. The design of the balustrades incorporates integrated flower boxes, allowing plants to climb along the galleries. The balconies surrounding the outer side of the building are made of glass and 516 so-called ‘muse frames’: repetitive industrial steel frame elements that invite you to lean on it and daydream.
Merging old and new was an important part of designing Fenix I, connecting the building with its immediate surroundings. On the Rijnhaven as well as the Veerlaan side, the residential building layers were matched to the surrounding buildings. The original characteristics of the facade, such as the brute concrete, large loading doors, and letterbox window, are restored. References to the former use of the building are emphasized.

Lofts and Docks
The residential volume on top of the warehouse comprises 214 lofts. In the interlayer, these apartments have a height of 4m. The impressive frame structure of the steel table construction, which made it possible to add a considerable volume of living space while technically keeping it separate from the monumental warehouse, is unmistakably part of the apartment.
The first three floors in the volume above the interlayer comprise about 80 rental apartments with limited variation. The floors above that contain approximately 130 lofts, with a high degree of flexibility in size and lay-out.
The existing warehouse, Fenix Docks, has a mixed-use purpose. Part of the warehouse was rebuilt to provide for an efficient public parking garage. Along the quay, there are 5 quay houses with a free lay-out, fitted with original loading doors accessible directly from the quay. In addition, Fenix Docks offers room to three well-known cultural institutions, which together form the Culture Cluster. Mei developed inventive solutions to fit the various required spaces into the existing warehouse structure. The result is a smart design with both communal and private spaces, where spontaneous meetings between the various organizations and users can take place.

Sustainability
Sustainability is an integral part of Fenix I, starting with maximum reuse of the existing building. The new building is future-proof and adaptable. The space can be flexibly partitioned because of a main supporting structure consisting of disc columns instead of walls and the central circular installation ring.
Fenix I has been optimized to allow daylight to enter the courtyard and the apartments. The glass facades are made of high-performance solar control glazing, which blocks solar heat from entering the building and reduces the need for cooling. The roof gardens and vertical green courtyard facades stimulate a healthy, comfortable and nature-inclusive living environment, while filtering particulates from the air. The green roofs collect rainwater which can be reused. In addition, the energy use of the building is highly efficient. In the communal areas, LED lighting, a mechanical ventilation system with high-efficiency heat recovery and heat and cold storage is applied. 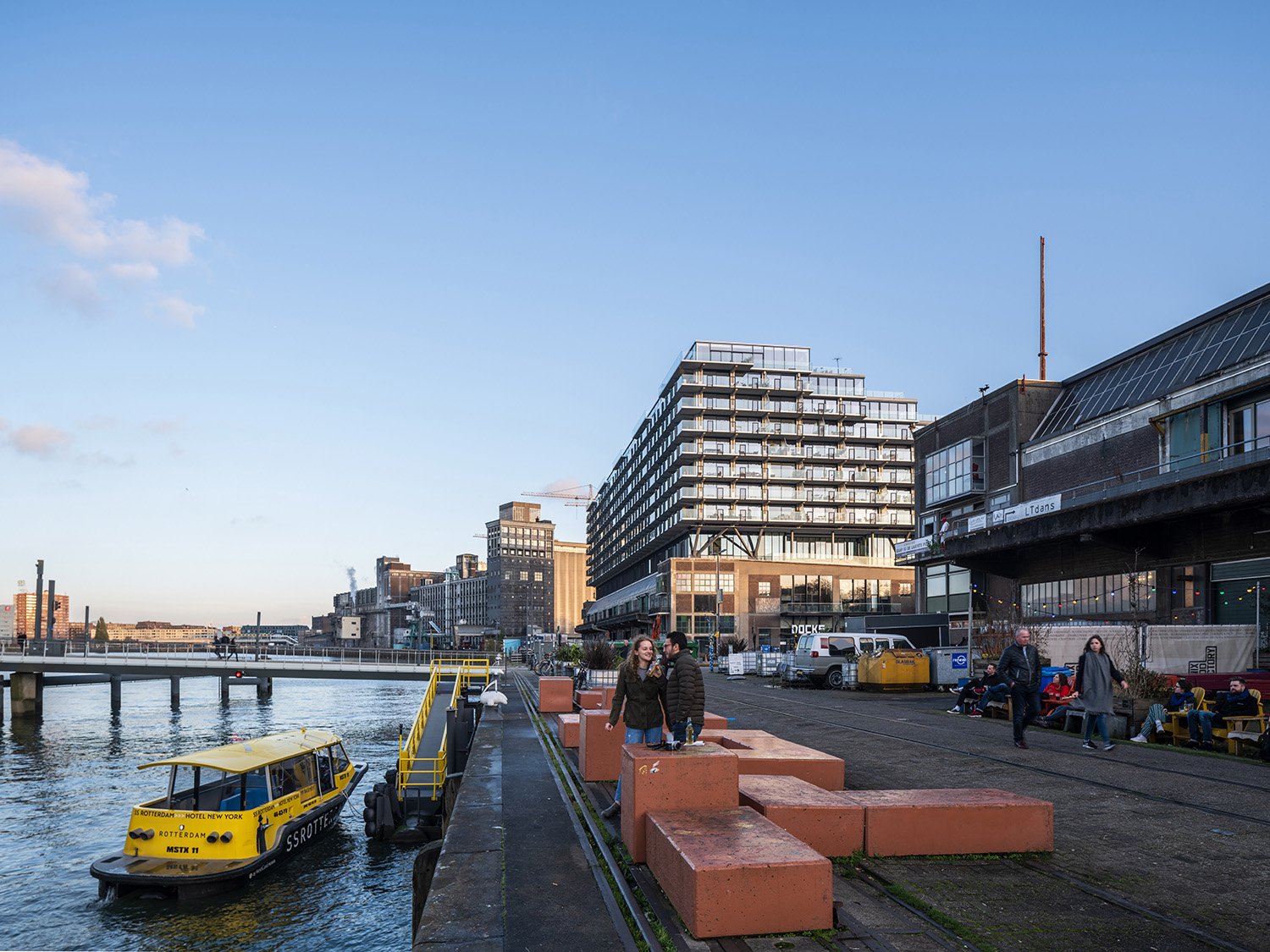 Mei architects and planners is an award-winning architectural firm with great expertise in redevelopment, urban planning and innovation in architecture.

The office, set up by architect Robert Winkel, is based in Rotterdam and operating through Europe. The Mei approach is characterized by curiosity and an open mind, combined with rich technical knowledge, boldness and a high degree of creativity. Mei is particularly interested in the user of the projects. The buildings often serve as a catalyst for a neighbourhood and contribute to the creation of strong communities.

Mei is recognized as a leader in transforming existing buildings such as the Fenix I and Jobsveem warehouse in Rotterdam, and the Cheese Warehouse in Gouda. Moreover, Mei is internationally acclaimed and awarded for completing striking new-build projects and urban designs. Examples are the Schiecentrale 4B in Rotterdam and McDonald’s Coolsingel 44 in Rotterdam.