The project site includes the Macchiavecchia marble quarry, identifiable by a large crane and a number of marble blocks at the foot of the quarry face; here we find the old sheds and the covered structure where blocks were first cut before being further processed. Deeper in the wood, we find an area that was used as a depot, before coming to the “Broccatello” marble quarry and to a large area formerly used for the extraction of inert materials known as Ex-Cava Caldelari, a site of great natural diversity. Since 2003 the area has been part of the buffer zone of the Monte San Giorgio UNESCO site. Another area known the world over for its geological significance is the former Cava Caldelari. Here the rocks of the Tremona formation, also known as Retico emerge, together with the rocks of the Broccatello and their fossil concentrations in banks or pockets dating back to the Jurassic period. The project for the redevelopment of the area and for the re-use of the buildings focussed on three areas: the educational trail (a path that leads to the ancient quarries in the wood above), the natural amphitheatre (a project for the reuse and promotion of the great disused Cava Caldelari; the quarry workshop (the conversion of the ancient sheds where marble was processed into workshops and exhibition spaces) The Educational Trail – Above the current marble quarry there are a number of old, now disused quarries. The project entails organising and marking a pedestrian route (an educational trail) to the disused caves revealing the different quarrying techniques (chisel, helical wire) and the various types of stone that were exctracted (red Macchiavecchia, Rosso Arzo, Broccatello). At the start of the trail a new building houses the public conveniences. The concrete slab is made from inert materials specially obtained by crushing marble, and the surface has been polished to reveal them. The building that houses the public conveniences is entirely built from marble blocks and its translucent canopy is supported by HEB steel beams. The doors are made from oxidised metal grills. The structure is lit from above and naturally ventilated from the open band between the roof and walls. The washbasin was made from an ancient hand-quarried block of marble. The walls were built from blocks of marble with different surfaces and finishes. The Natural Amphitheatre – The former Cava Caldelari is an area of great significance in terms of geology and paleontology, as well as for its flora and fauna. The project known as “Natural Amphitheatre” has been developed in collaboration with the environmental engineering firm Oikos 2000 and involves the organisation of spaces to make them accessible while preserving particularly significant natural environments, by creating specific biotopes that capitalise on the natural features of the site. The project has cleared an area that was cluttered with quarrying detritus, now replace by four rows of seats made from marble blocks, arranged in a semi-circle. The steps can be used as seating and allow the staging of public events. A timber walkway was built in locally sourced black locust wood to extend the footpath across the marshland area along the quarry face. The trail leads to an area characterised by some imposing reinforced concrete walls (the base of the old crushing plant) which have been made safe by the addition of a railing made from rebars. This area - known as the baluardo panoramico (the belvedere) overlooks the quarry and has been fitted with three tables made from marble slabs. A stair made from timber and marble connects the trail to another footpath above it. Two new biotopes were also created: a small pond where rainwater from the area is collected, and a biotope for small animals – a mound of piled marble blocks that recreates the habitat removed to make way for seating. The Quarry Workshop – The quarry workshop project reuses and upgrades the ancient buildings of the original production facility, which consists of two discrete volumes: the main building (known as the marble shed) and a secondary building that organises access and circulation. The elevation of the main building faces on to the cantonal road and is entirely built from marble blocks. This unique feature is highlighted by a new roof cover that emphasises the material and construction technique. The new roof has no drainage gutter and is set back from the plane of the facade, so that rainfall drips onto the marble blocks, enhancing their colour. The openings in the original facade (a door and three windows) were sealed with marble slabs to give the elevation material uniformity: the facade appears as a single large block of marble in which the traces of the original facade are etched. The old roof cover has been replaced. However, the unique, original timber truss of the marble shed has been retained. To ensure the static safety of the roof, the ancient truss is now flanked by two new steel trusses. The main volume of the building that organises circulation has been covered with a new roof, clad in marble slabs. All other volumes are covered with corrugated transparent polycarbonate panels which allow spaces to be lit zenithally. New public conveniences were built with floors made by alternating strips of Arzo marble, grey Macchiavecchia and Alp green marble; the washbasin was carved from an ancient block of Arzo red marble extracted manually, with a chisel. The two original steel doors were restored and reused, as were two ancient wooden doors inside the building. The workshop spaces have been retained, and the original machinery for handling stone has been restored. Inside the ‘marble barracks’ an ancient Hatz diesel engine from 1925 operates a flywheel which in turn activates a helical wire. The wire is connected to the outside by a system of upright base supports and flywheels, and is used to demonstrate the technique for cutting marble with a helical wire. 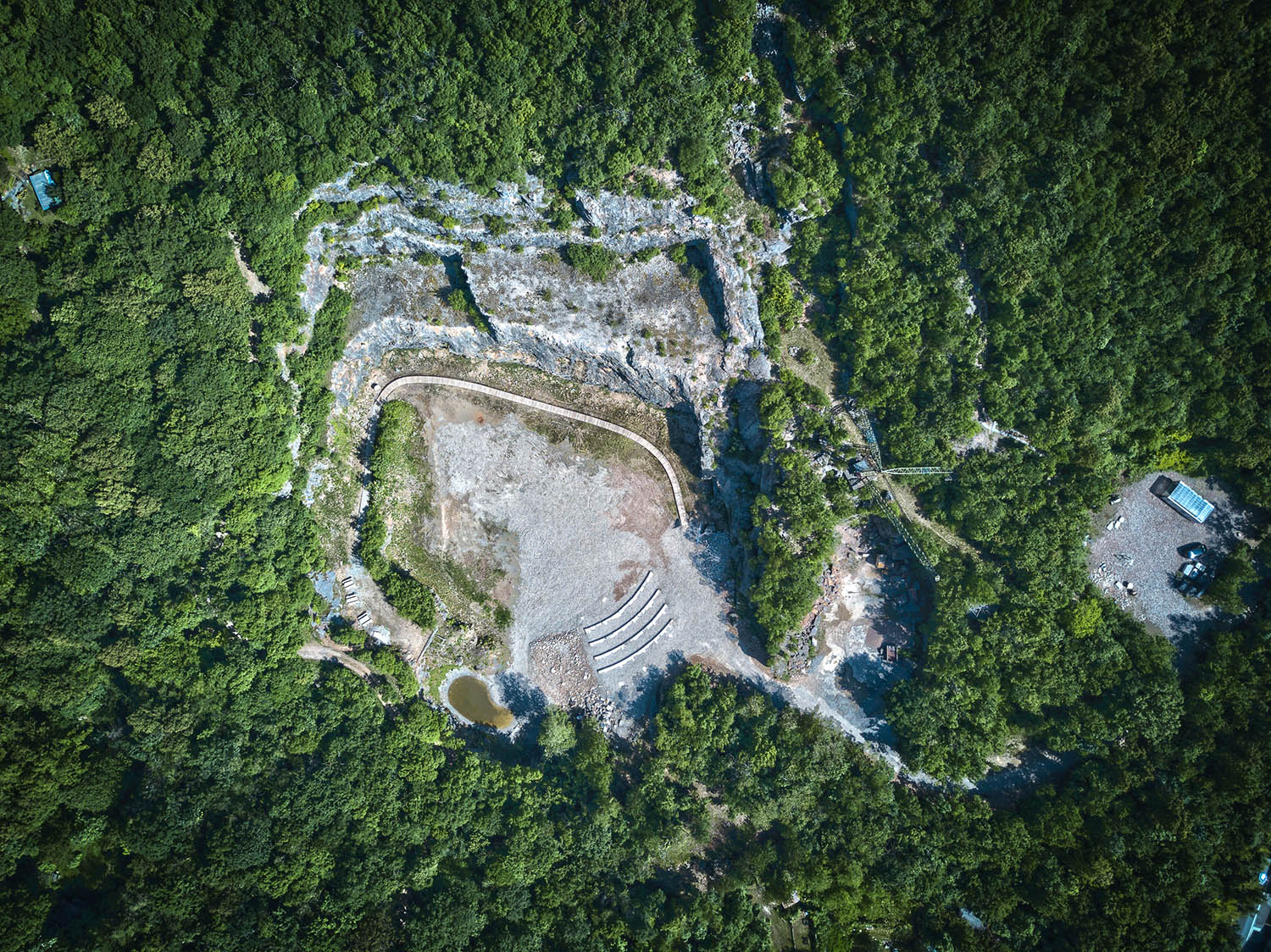 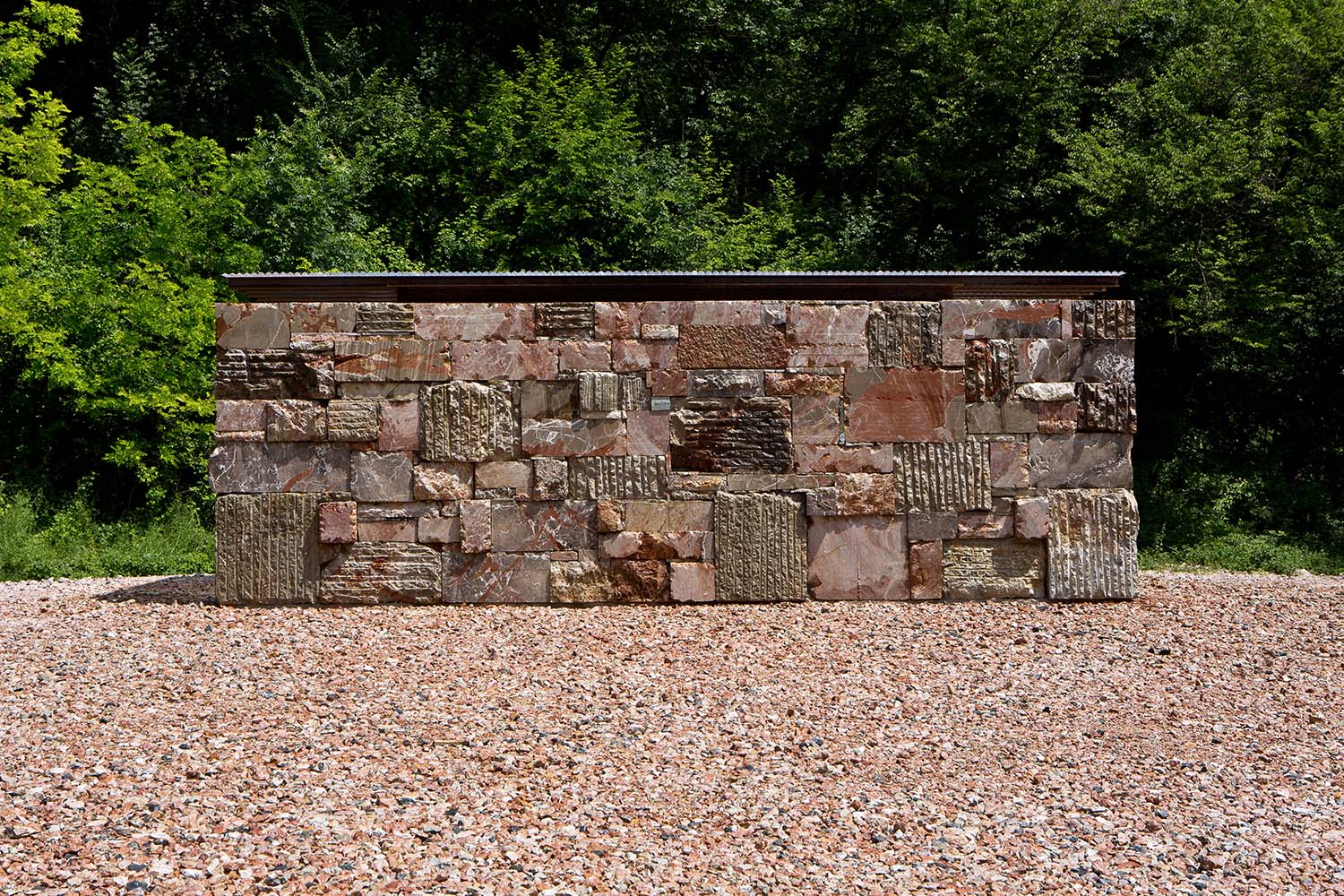 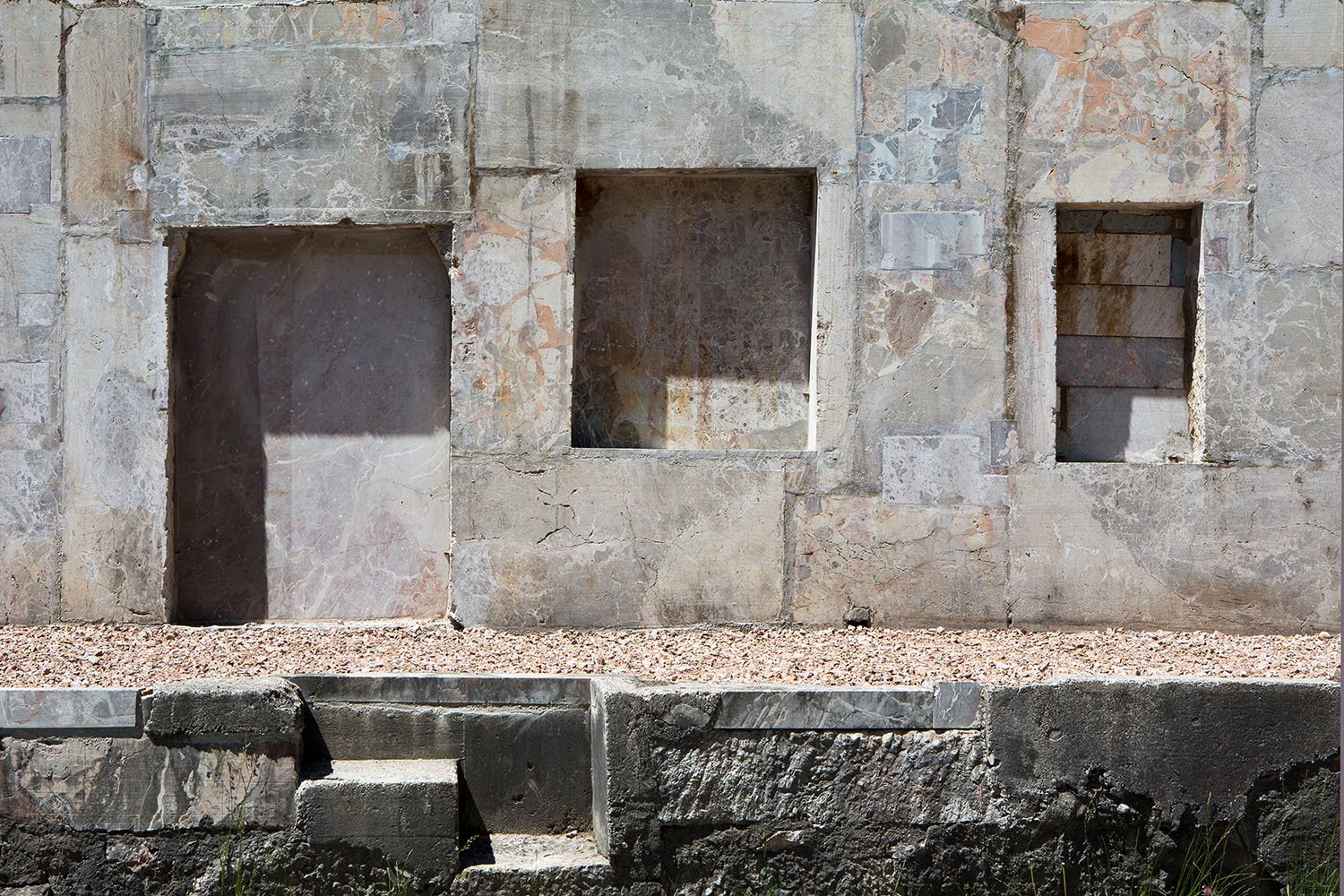 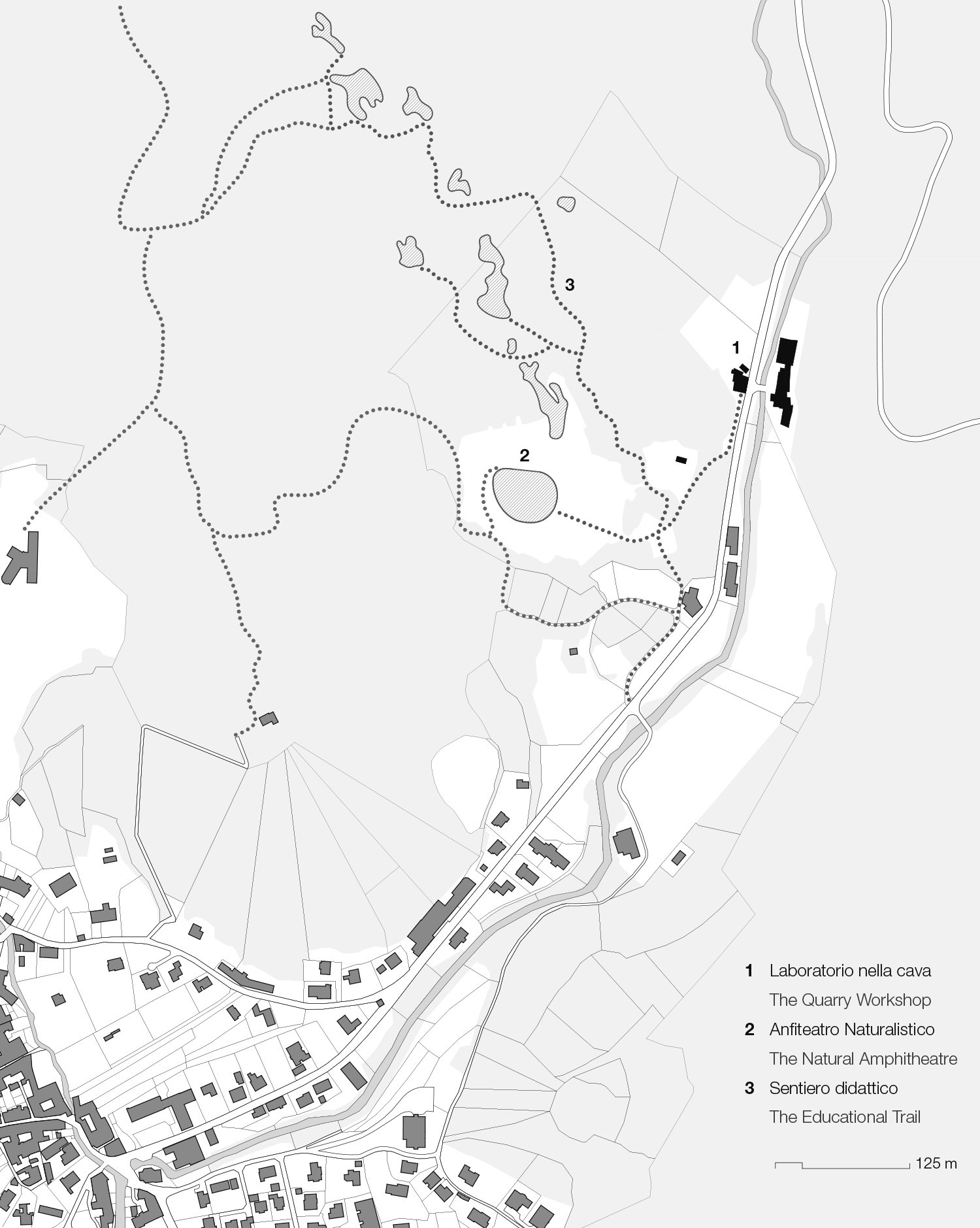