The British Building was designed by William Scamp R.E. as a pair, with another building across the water being identical. These buildings are rich with history, having seen the turbulent story of the Three Cities area. Unfortunately, both buildings were severely damaged during World War II and later fell into disuse. The British Building was left in a state of disrepair, abandoned and unsafe, a place where vagrants would enter to engage in anti-social behaviour, within a building which still contained asbestos until 2015.

Parts of the building were completely missing, thus rendering the original volume distorted and unsymmetrical. Other unsanctioned alterations carried out during the last fifty years, including the formation of new openings, and the closing of the original openings, further served to mutilate the original architectural rhythm of the building. It was an eyesore for the Three Cities’ inhabitants and a dangerous structure.

Our design began with analyzing the past history and also current situation of the area, to ensure that the restoration of such buildings would also serve to accelerate the urban regeneration of the entire area. The rehabilitation of such a building had to serve not only the University's future students but also the surrounding environment.

Through our design, the building was brought back to life with a new purpose, to serve its surroudings differently. We wanted not only restore the building but to rehabilitate it and showcase its existing historic elements.The building showed signs of severe decay which had to be meticulously restored. Following an analysis of historical records, we could reconstruct the missing sections of the building which were destroyed, such as the central tower and west wing. Within our design, it was important to respect the original maximum height of the building. The building had to be mapped, and in particular the façade was found to be severely deteriorated.

Within our design, to re-utilise the building as an education facility, we ensured that the historic building remains the protagonist of the university centre by highlighting its original industrial character. Our design incorporated the creation of 13 classrooms, 4 laboratories, 1 cafeteria, 1 library, 18 offices, 1 internal garden and 2 receptions, through minor alterations and construction of additional floors. Some of the services were left exposed, in keeping with the buildings previous industrial use. Emphasis was given to promote transparency within the building and an internal garden promotes cross ventilation and allows for natural ventilation to enter.

Due to the existing volume which housed a large floor to ceiling height, we could construct an intermediate floor out of contemporary steel and precast elements so as to be easily visibly distinguishable from the historic fabric. The new volumes were constructed with a geometry reflective of the original building but with a contemporary volume so as to create the same distinction. Through the utilisation of glass and steel structures, the additional floors are in line with the height of the buildings within the overall masterplan, so as to create a homogeneous waterfront elevation.

Besides creating an educational facility, we wanted to ensure that many sustainable initiatives were also incorporated within our design process. In particular, we felt that it was of the utmost importance that an educational facility encourages and implements sustainable practices, not only to produce an energy-efficient building but also to change the way the students, the facility and the communit consider the importance of sustainable architecture.

The thermal mass of the external envelope was further improved through the installation of thermal insulation which was installed on the interior of the building’s stone masonry facades as well as within the roof build-up, thereby improving energy efficiency and decreasing heat loss during winter. Sound insulation, coloured in different shades so as to provide a pleasing aesthetic, was installed within the interior of the building so as to reduce noise pollution. This sound insulation is of particular importance so as to encourage quiet study areas.

When imagining the new interior layout, we considering the proportions of the new spaces that would be created, and we could thus encourage passive ventilation by designing beneficial height-to-depth ratios with the proposed University. The layout encourages natural light to penetrate within the building, with blinds installed so as to ensure flexibility for the building’s users. An internal garden is located on the roof so as to encourage green architecture, reducing the carbon footprint through the implementation of vegetation. The façade was designed with a cantilevered canopy so as to create shade, thereby producing a lower thermal transmission. The angle and dimensions of the cantilever ensure that the low-angle winter sunlight can still penetrate within the building whilst the interior is better protected from the high-angle summer sunlight.

Detailed designs ensured that the new high quality finishes could be merged homogenously to the original building fabric, including the installation of custom made furniture and lighting with the original stone fabric. Particular attention was paid to the lighting design of the building, taking into account the specific use of every room to ensure user comfort as well as the appropriate level of luminosity for the surrounding materials. All of the installed lighting are energy-efficient LED systems, which provide a longer life span therefore reducing power consumption.

This project was awarded 2 Planning Authority commendation awards in 2019 in the category of Internal Architecture for Commercial projects and Rehabilitation and Conservation, The Golden A' Design Award Winner for Cultural Heritage and has recently been shortlisted for the Prix Versailles 2020 for Campuses. 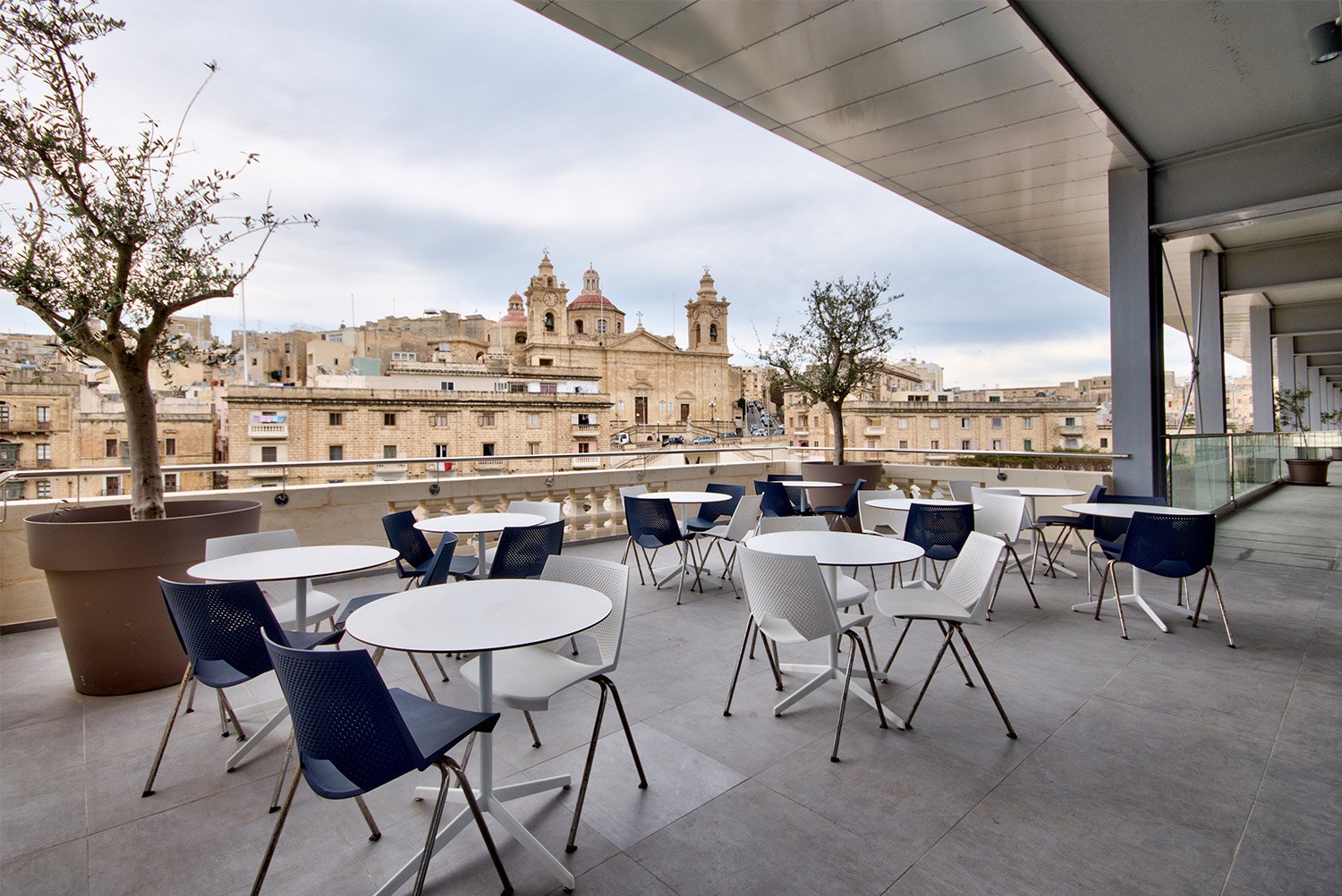 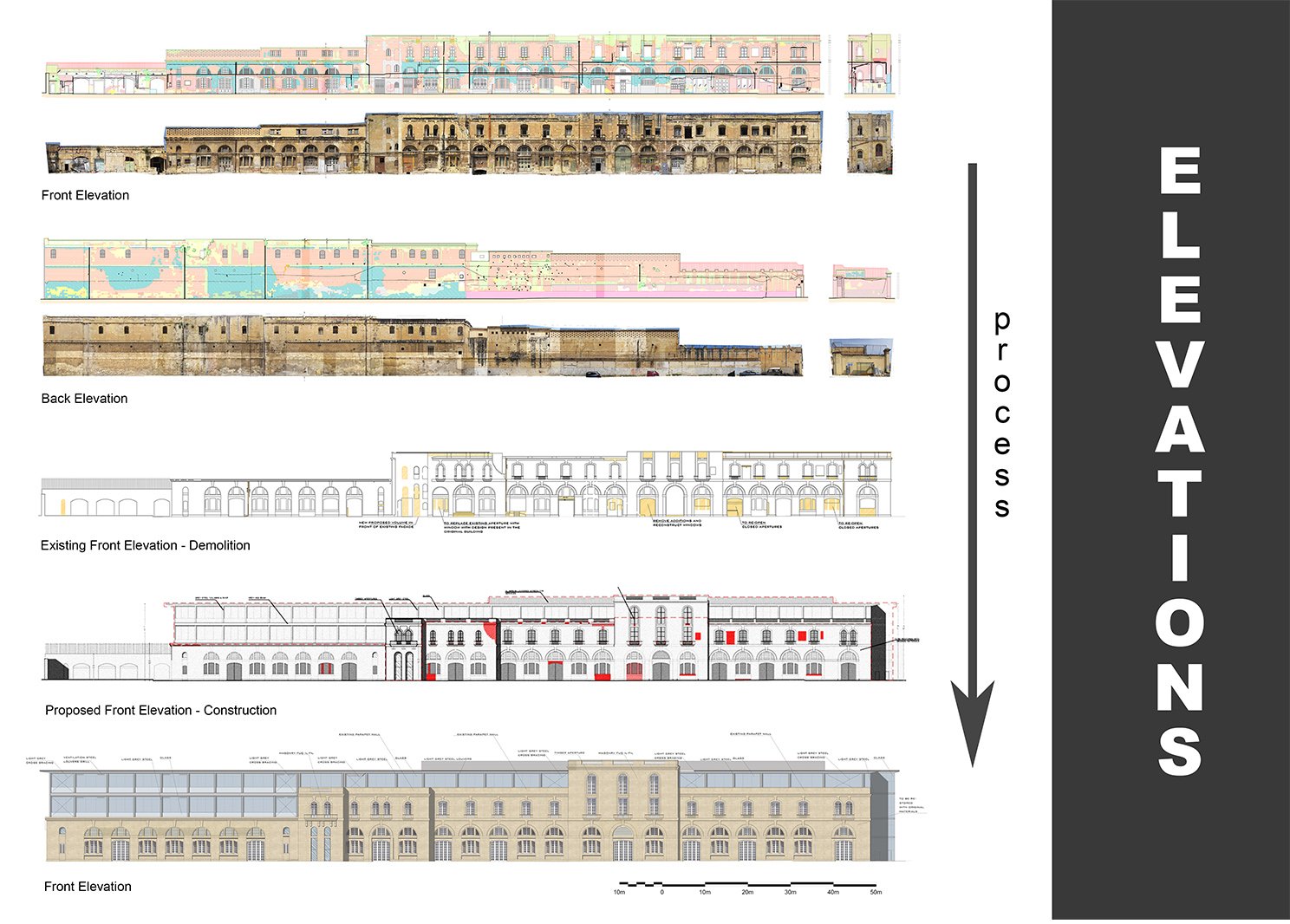 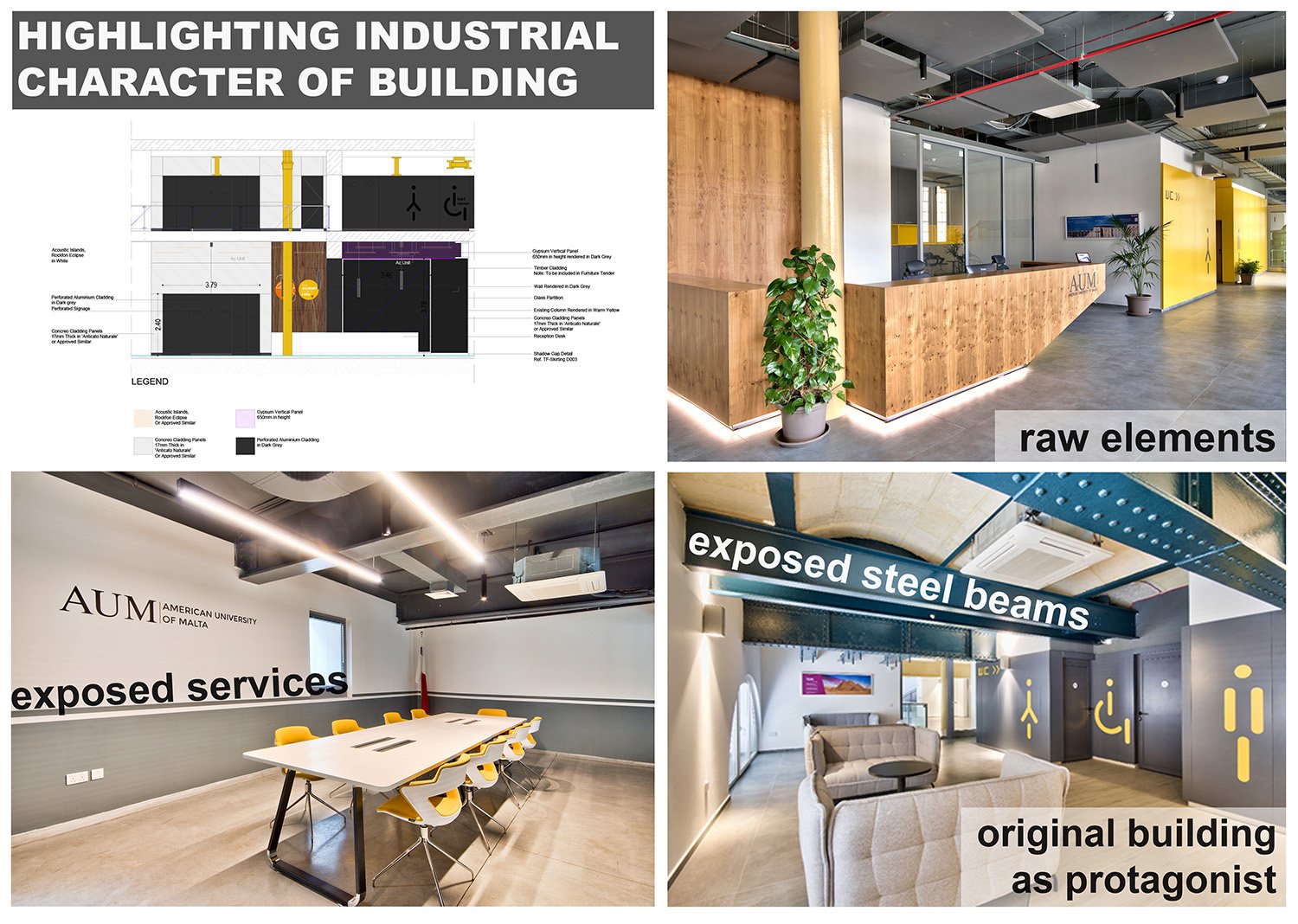 Dr. Edwin Mintoff Architects was founded over thirty years ago by Dr. Edwin Mintoff, an architect and civil engineer who became one of the first Maltese architects to obtain a doctorate Ph.D. in the field of architecture and urban design. The firm now offers a wide range of services including land and environmental planning, urban design, architectural and interior design, civil, road and structural engineering, land/quantity surveying as well as cost consultancy, both in Malta and well as overseas. The firm's design philosophy is heavily based on producing a seamless design which incorporates the principles of urban architecture.. We look to design not just the building themselves but to consider the new spaces that are created between buildings. The firm has been responsible for the development of a vast number of projects both locally as well as overseas, and has been awarded a number of local and international awards, including the ‘Prix Versaille’ and the ‘A Design’ Awards.