The Statue Of Liberty Museum: “Liberty Enlightening the World" The Statue of Liberty, “Liberty Enlightening the World,” is known the world over, and its torch is as much a universal symbol of enlightenment, freedom, and democracy, as it is a welcoming beacon to all. However, the Statue of Liberty Museum was previously located in the Statue’s pedestal—which prevented 80% of Liberty Island’s visitors from entering due to restrictive security measures implemented following September 11, 2001. In contrast, the new Statue of Liberty Museum gives every visitor the opportunity to experience the museum and the inspiring history and message of Lady Liberty. Opened to the public on May 16, 2019, the new 26,000-square-foot Statue of Liberty Museum achieved the architect’s two goals: 1) To create a building that uplifts the experience of the island for all visitors, and 2) To extend and add to the island’s open space, a UNESCO World Heritage Site and home to the beloved international monument.

SYMBOLIZING LIBERTY
Located at the opposite end of the island from Lady Liberty herself, the museum is a garden pavilion designed to welcome all of the island’s 4.3 million annual visitors of all ages, nationalities, and ethnicities to spread the story of the Statue of Liberty, her creation, and her significance. Celebrating the idea of “access for all,” the museum is once educational, cultural, contextual, and inspirational, conveying the history and message of Lady Liberty through an understated design that respects the site and Statue, while highlighting her torch and the enlightenment, freedom, and democracy it represents.

The museum anchors the formal pedestrian mall and main axis that connects the museum to the statue, and extends this axis via a sweeping granite staircase that leads to its roof. The visitor experience culminates in a dramatic granite roof terrace that provides unobstructed views of Lady Liberty, the Manhattan skyline, and New York Harbor. The design eschews formality in favor of an asymmetrical design that embraces its dramatic setting and changes form as visitors move in, on, and around it, much as the idea of liberty is a diverse and pluralistic concept. The project’s dynamic expression was inspired by the irregularity of the water’s edge, as well as the geometry of the adjacent circular Flagpole Plaza.

The resulting form creates a visual counterpoint to Fort Wood at the base of the Statue, which bookends the far end of the mall. Both the Fort and Museum have acute corners; whereas the Fort turns inward, the museum radiates outward, celebrating freedom. The museum's centerpiece is the original torch that graced the Statue of Liberty for nearly 100 years—a universal symbol of enlightenment that was previously located inside the pedestal’s base. The new museum frames the torch with a sparkling glass vitrine that makes it visible as a beacon to visitors on the island and all over New York Harbor.

MERGING BUILDING & LANDSCAPE
The design merges building and landscape, emerging as a new geology that is deeply integrated with nature and its context. The building responds to the layout of the island, which is based on French formal garden traditions, and establishes a naturalized landscape that is “lifted” above the formal mall. Its steps, terraces, and roof extend the park and the perimeter esplanade above the ground plane to carry visitors onto the site, creating a new visitor environment for viewing, resting, and picnicking.

The museum accommodates heavy and continuous pedestrian traffic year-round and the flow of the public in, through, and around the building. Interior spaces include exhibition galleries, visitor services, theater, administration, and support spaces, with exhibits and displays afforded theatrical, “black-box” settings. The Statue of Liberty’s restored, original torch is the main attraction, located in the museum’s prominent Inspiration Gallery and surrounded by 22-foot-high glass walls with a silk-screened dot pattern that deters bird impacts and ensures their safety.

SUSTAINABILITY & RESILIENCY
The Statue of Liberty Museum anticipates LEED Gold certification under the LEED BD+C: New Construction v3—LEED 2009 rating system, surpassing the National Park Service’s minimum of LEED Silver. In addition to the design’s integration of resiliency measures, it is respectful of the site’s historical significance and its ecological and environmental impact

During Hurricane Sandy in 2012, Liberty Island suffered severe damage, and integration of resiliency measures became a more integral aspect of the museum’s design. The building’s elevation above the 500-year flood plain (10 feet above the adjacent plaza) prevents damage from extreme weather events, allowing the museum to withstand its harsh, windswept, maritime setting. The museum’s green roof super-insulates the building by capturing and filtering stormwater, while around the building, grounds are planted with native meadow grasses that create a natural habitat for wildlife and migrating birds. Glass surfaces are low-iron, non-reflective, and feature a silk-screened dot pattern to ensure the safety of migrating birds.

The project’s materials link the future of Liberty Island with its past, employing the same Stony Creek granite chosen for the Statue’s base, and a bronze alloy whose patina matches the monumental bronze doors of Fort Wood. The biggest addition to Liberty Island since the statue itself, the museum helps convey the history and inspiring message of Lady Liberty to a new generation of visitors. 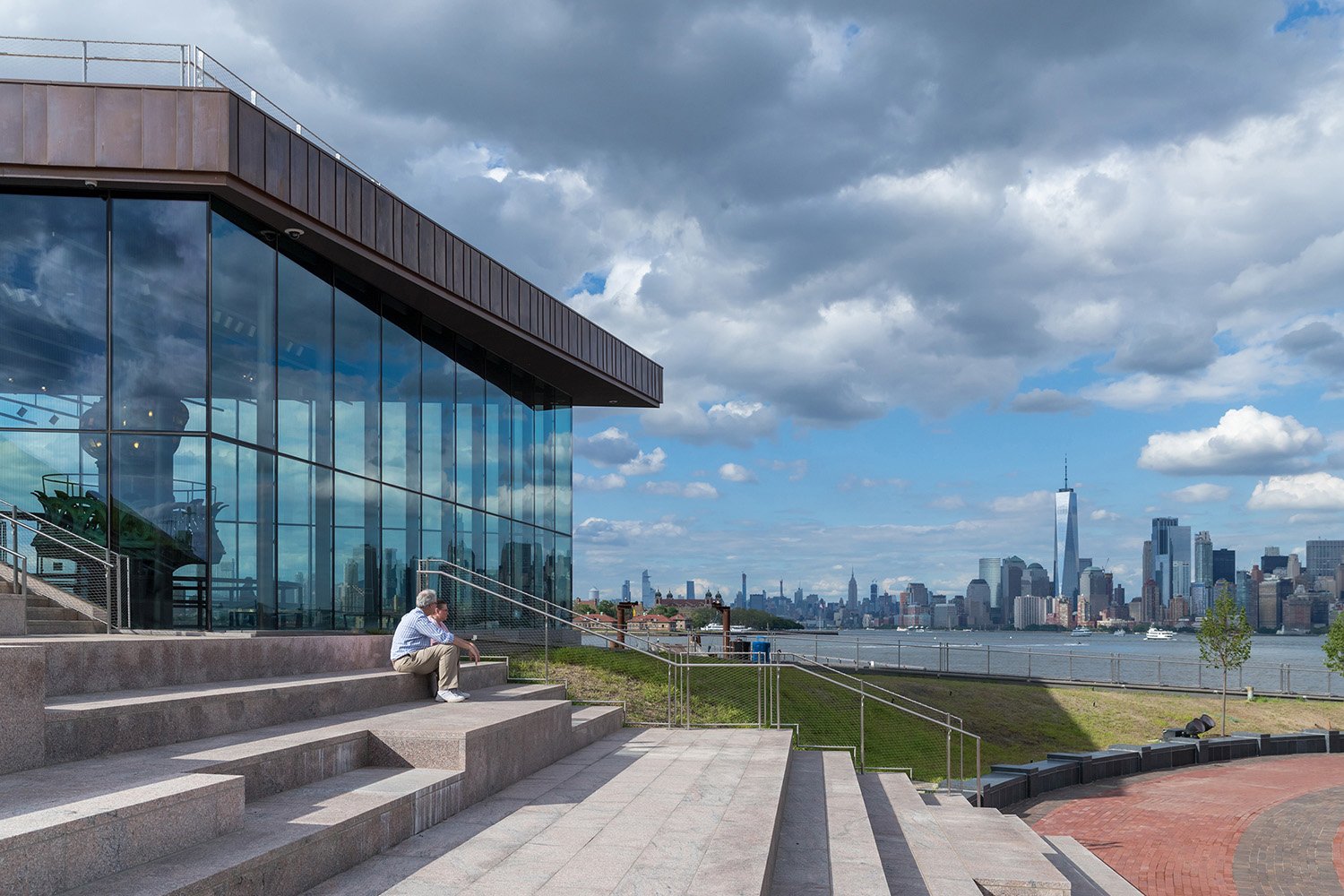 FXCollaborative is a New York City-based architecture firm founded in 1978. The firm leverages broad expertise in architecture, interiors, and planning to enrich our world with responsible, intelligent, and beautiful design. The firm’s holistic approach integrates client aspirations, an urban sensibility, and a celebration of the craft of building. FXCollaborative’s work ranges from the scale of individual buildings and interiors—office towers, multi-family residences, cultural facilities, workplace, K-12 and higher-education institutions—to the city as a whole, addressing infrastructure and transportation.