Snøhetta Designs Outdoor Care Retreats for Patients at Norway’s Largest Hospitals
In the peaceful ambience of the forests only a short walking distance from two of Norway’s largest hospitals, Snøhetta has designed secluded wooden shelters aspiring to make hospitalization easier for patients and their families. Designed on behalf of the Friluftssykehuset Foundation, the Outdoor Care Retreats offer visitors a physical and psychological respite from stringent treatment regiments and the isolation that often follows long-term hospitalization.
Monday, January 7, 2019 — Leaning towards the lush forest and the trickling Sognsvann creek, the Outdoor Care Retreat is located only a hundred meters from the entrance of Norway’s largest hospital, Oslo University Hospital, Rikshospitalet. Its sister building is situated in the deciduous woodland by Sørlandet Hospital Kristiansand in the South of Norway, between oak trees and birch, overlooking a nearby pond. Originally developed in collaboration with the Department of Psychosomatics and CL-Child Psychiatry at Oslo University Hospital, the Outdoor Care Retreat provides a peaceful space where visitors can benefit from the therapeutic qualities of nature.
"Nature provides spontaneous joy and helps patients relax. Being in natural surroundings brings them a renewed calm that they can bring back with them into the hospital. In this sense, the Outdoor Care Retreat helps motivate patients to get through treatment and contribute to better disease management", states Child Psychologist Maren Østvold Lindheim at the Oslo University Hospital, one of the initiators of the project.
The space can be used for treatment and contemplation, and for spending time with relatives and friends away from the hospital corridors. The cabins are open to every patient connected to the hospitals regardless of disease group, and reservations are managed through a booking system.
A Generous Design
The subdued 35 m^2 spaces stand in stark contrast to the monumental hospital buildings that they are affiliated with. Referencing the playful construction of wooden tree cabins typically made by children, the luminous cabins are formed like skewed blocks of wood that extend into the landscape through asymmetrical branches. The massive wood of the main structure of the cabin will turn gray over time, blending naturally into the surroundings.
Following Snøhetta’s commitment to socially sustainable design and public space, the cabins are accessible for wheelchair users and the angled entrance of black zinc is large enough to make room even for hospital beds.
The cabin consists of a main room, a smaller room for conversation and treatment, and a bathroom. The interior is fully clad in oak, echoing the natural materiality of the woodlands outside. Inside the space, colorful, sculpted pillows can be moved around freely, allowing children to build huts or lie down to gaze at the canopies through the circular window of the ceiling of the main room.
The cabin’s large glass windows can be fully opened, inviting nature into the space. In this way, visitors can peek into the woods, smell the damp forest floor, and listen to the sound of trickling water while still being inside the cabin.
Although the cabin is integrated in the hospital campus, its secluded location and natural aesthetics allows it to be perceived as a place of its own. It is a place of muted magic, a place out of the ordinary that provides a generous and much-needed breathing space for visitors of all ages.
About Friluftssykehuset, the Outdoor Care Retreat
The Outdoor Care Retreat is a project initiated by the Friluftssykehuset Foundation and developed in collaboration with the Department of Psychosomatics and CL-Child Psychiatry at Oslo University Hospital and Snøhetta. The aim of the project is to help somatically sick patients and their relatives get the best possible disease management.
The first Outdoor Care Retreat in Oslo was officially opened by the Norwegian Minister of Health and Care Services, Bent Høie, on June 8th, 2018 and the sister hospital in Kristiansand was opened the week after.
The cabins are donated as a gift by the Friluftssykehuset Foundation to the hospitals. The project has received funding from private and public supporters, including Sparebankstiftelsen DNB, Gjensidigstiftelsen, Bergesenstiftelsen, the Children's Foundation OUH and the Norwegian Parliament. In addition, a number of suppliers sponsored the first cabins with building materials, amongst others Kvadrat, Kebony and Lindal Gruppen. The vision is to build more Outdoor Care Retreats in vicinity to hospitals in Norway and abroad. The cabins are always adapted to the specific location in a way that requires minimal intervention in nature.
Pictured here is Friluftssykehuset Kristiansand. Its sister building Friluftssykehuset Rikshospitalet is located in Oslo. 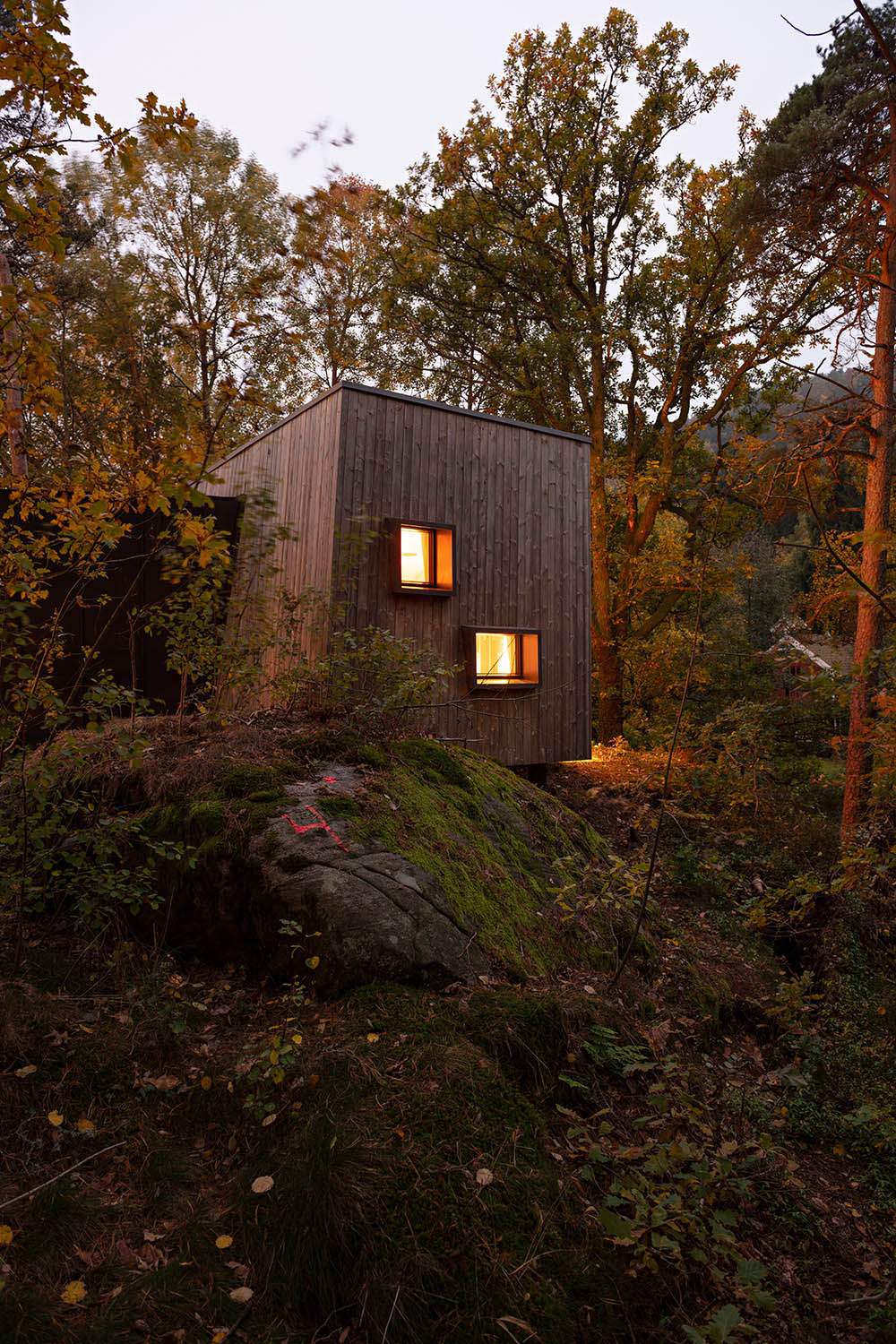 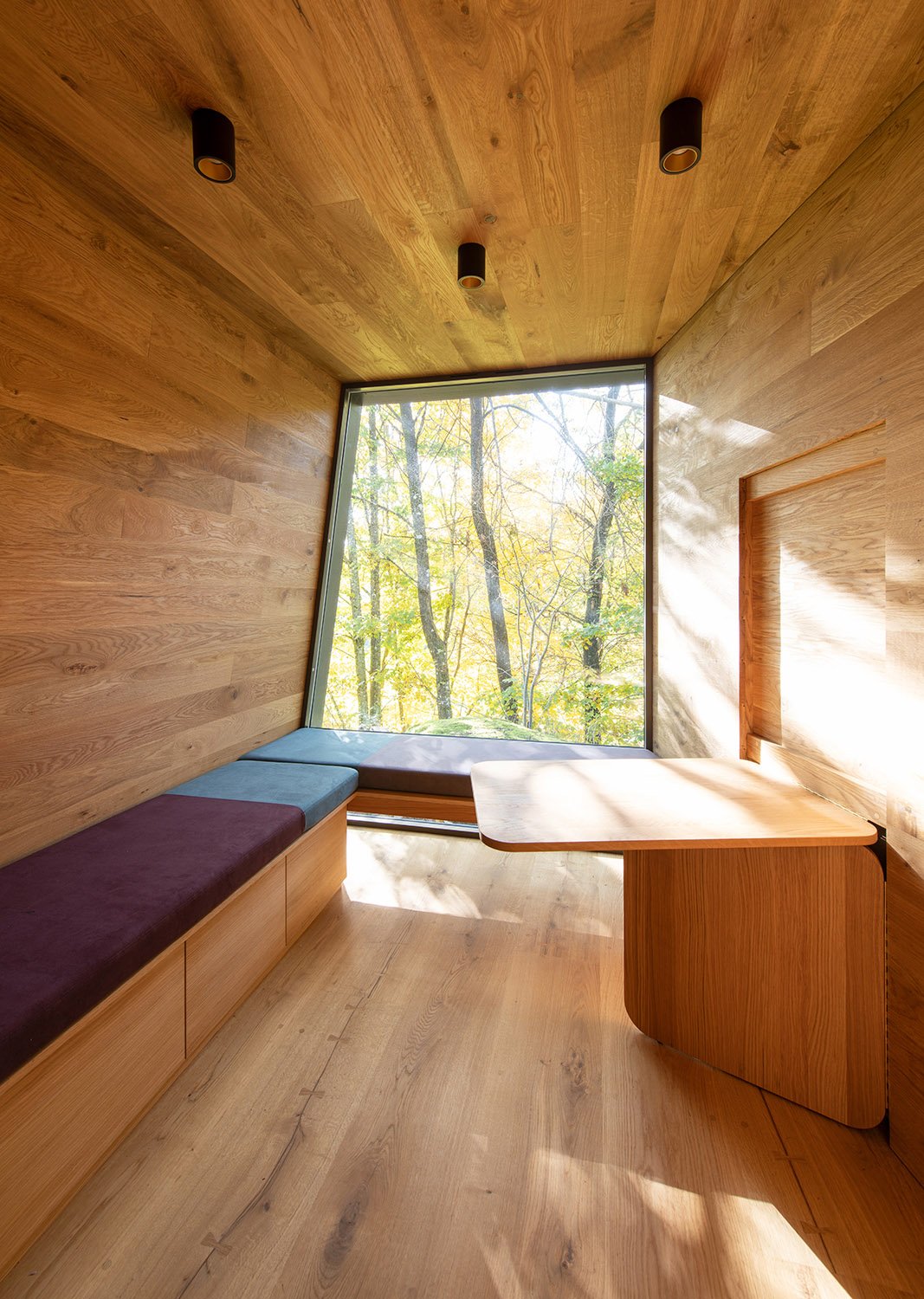 Snøhetta is an internationally operating architecture and brand design firm consisting of architects, landscape architects, interior architects, graphic designers, researchers, product designers and artists.
Founded in 1989, Snøhetta’s first commission was the reimagining of the great Alexandria Library in Egypt and was followed a decade later by the Norwegian National Opera and Ballet, another international competition that also received numerous prestigious international awards. Since 1989, Snøhetta has established itself as a world famous multidisciplinary practice operating in 7 cities in 6 countries, employing over 250 staff members of 30 different nationalities.
Among other awards, Snøhetta has received the Aga Khan Award for Architecture, the Mies van der Rohe Award. The World Architecture Award, best Cultural Building, and European Prize for Urban Public Space. In 2016, Snøhetta was named the Wall Street Journal's Architecture Innovator of the Year.