Connected Living is an experiment in a radically responsive system of architecture, more sustainable and compliant to rapidly changing lifestyles. The organic platform of connected towers constantly changes and renews itself with facade-integrated robotics and prefabricated modules. The forest on the ground is sacred and the architecture of Connected Living is by all of us, and for all of us.

Survival through architecture
According to the 2015 Census, 60% of housing units in S. Korea belong to apartment buildings and 53.12% (26 million) live in apartments. 35 years ago, only 4.41%(1.6million) lived in this building type. Similarly but more intensively, in Singapore, 83% of population (3.2 million out of 3.9 million) lives in HDB flats- it was 6% in 1960s. The architecture of apartment buildings was a means of survival, adapting to the unprecedented speed of top-down economic development. Decades later, a massive scale of old apartments are now becoming more ‘A Parte’, segregated from the rest of the city, deteriorating with time and outdated from people with diverse cultures. Connected Living presents more sustainable and constantly evolving form of living.

“Humans are only one form of life that has emerged on earth. The cities that we build are just the same as anthills or coral reefs.” - Noboru Kawazoe

The Metabolism around 1960 and 1970 was based on a belief that architecture should be a tool for systematic change to imitate organic life and allow for continual growth and change. City scale reconstruction plans were proposed (A Plan for Tokyo by Kenzo Tange, 1960, Marine City, Kikutake Kiyonori, 1963). City as a building with joint core system was explored (Shinjuku Project: City in the Air by Arata Isozaki, 1961). An idea about prefabricated units with detachable mobility is also presented and built (Nakagin Capsule Tower Building by Kisho Kurokawa, 1972).

This more than 50 year-old movement continues to cast meaningful insight since current individual rating of sustainability measure will not be effective for larger issues such as urban sprawl, air pollution and global warming. We need a more systematic, integrated attempt for survival. The modernism equipped with global market forces fails to bring urban equity to human living. The world produces more wealth than ever before, and we have greater knowledge in building industries, civil engineering and urban policies. However, the informal settlements of the urban poor with inadequate public service and poor sanitation only grow in many nations. Connected Living radically undoes urban sprawl. The connected tower gives the land time to heal, radically increase the green area in the city. The elevated architecture, structurally superior systems of connected towers, provides more controlled public service, water treatment and energy management. The bridge area presents public parks, urban farms, and egress routes for advanced life safety.

Due to the dramatic advancement of digital tools, manufacturing technology, and increased standardization of products, one of the recent paradigm changes in the building industry is the ‘Prefabrication in Architecture’, through off-site construction for controlled fabrication with high modularity and cost efficiency. This alternative method of project delivery has been tested with tall residential towers (Carmel Place by nARCHITECTS, 2016, The Stack by Gluck+, 2014), various hotels (Citizen M, Travelodge), emergency shelters (NYC Emergency Housing Prototype, Garrison Architects, 2014) etc.

Connected Living suggests a base structural module which contains four stories of stacked units which are customisable by user needs. Within the modularization, various configurations can happen. These modules are mobile and flexible elements movable by robots which are integrated with building facade so that the system can respond to numerous socio-economic changes such as new family members, economic trends, job relocation, career change, seasonal events, and so on. There is no final facade design for these future apartments. Robot integrated buildings continuously build and unbuild, move and un-move the modules along with our continuously evolving life changes.

Connected Living imagines an exoskeleton integrated with construction robots controlled by human decisions aided by CIME(Central Intelligence of Metabolic Evolution), the Artificial Intelligence. The robots become a part of the architecture rather than simply adding machines to the building. This not only provides responsive construction and manufacturing for users’ needs, but it also allows the robots to analyze systemic energy usage, resource regeneration, human behaviors, community activities, social activities and climate change. Residents submit their personal needs according to life events, then CIME confirms the creation, deconstruction and relocation of program modules. Three robotic arms work together to move modules with the decision of a human-AI combination to provide the best public service, security, and occupant well being. 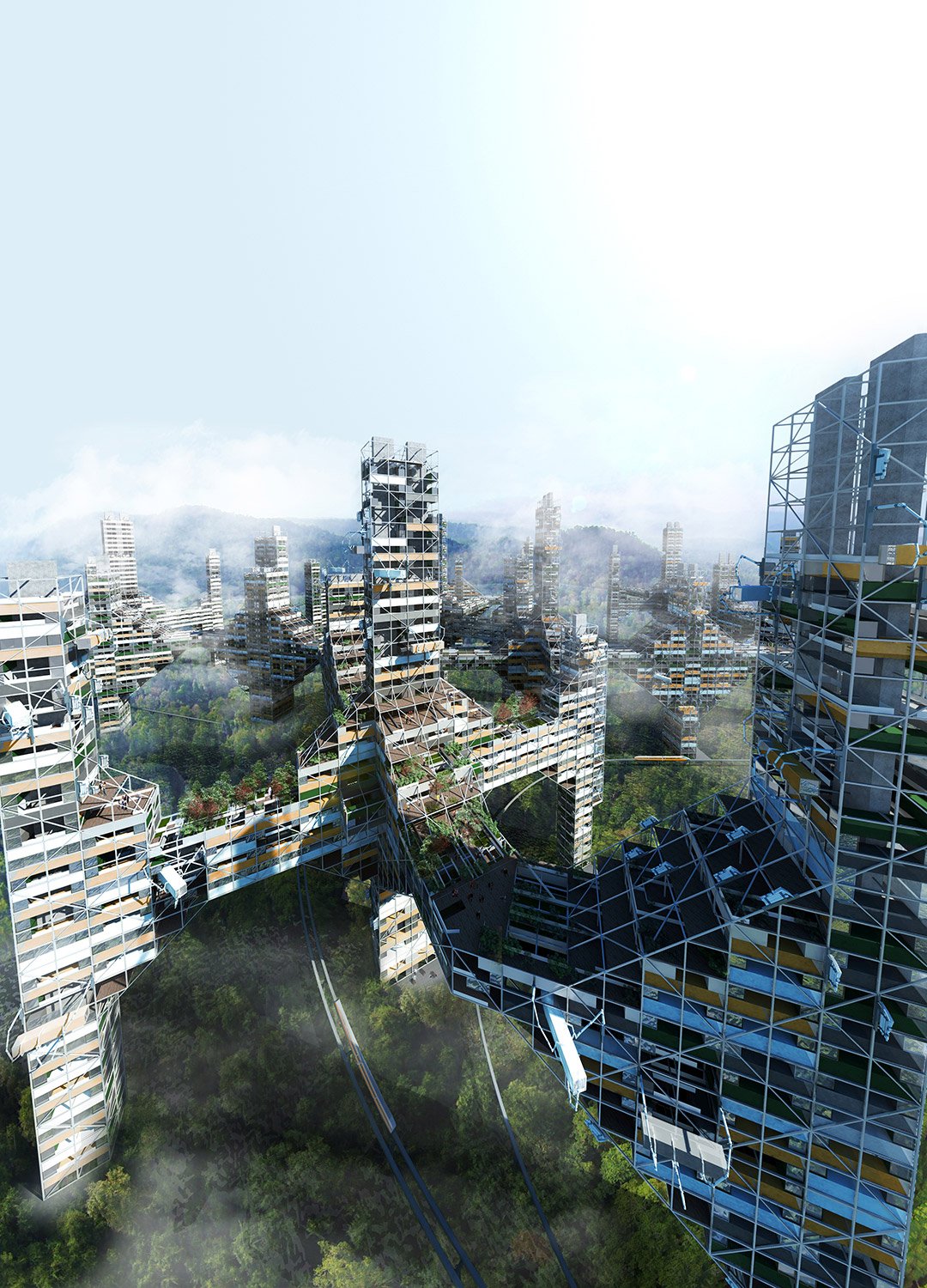 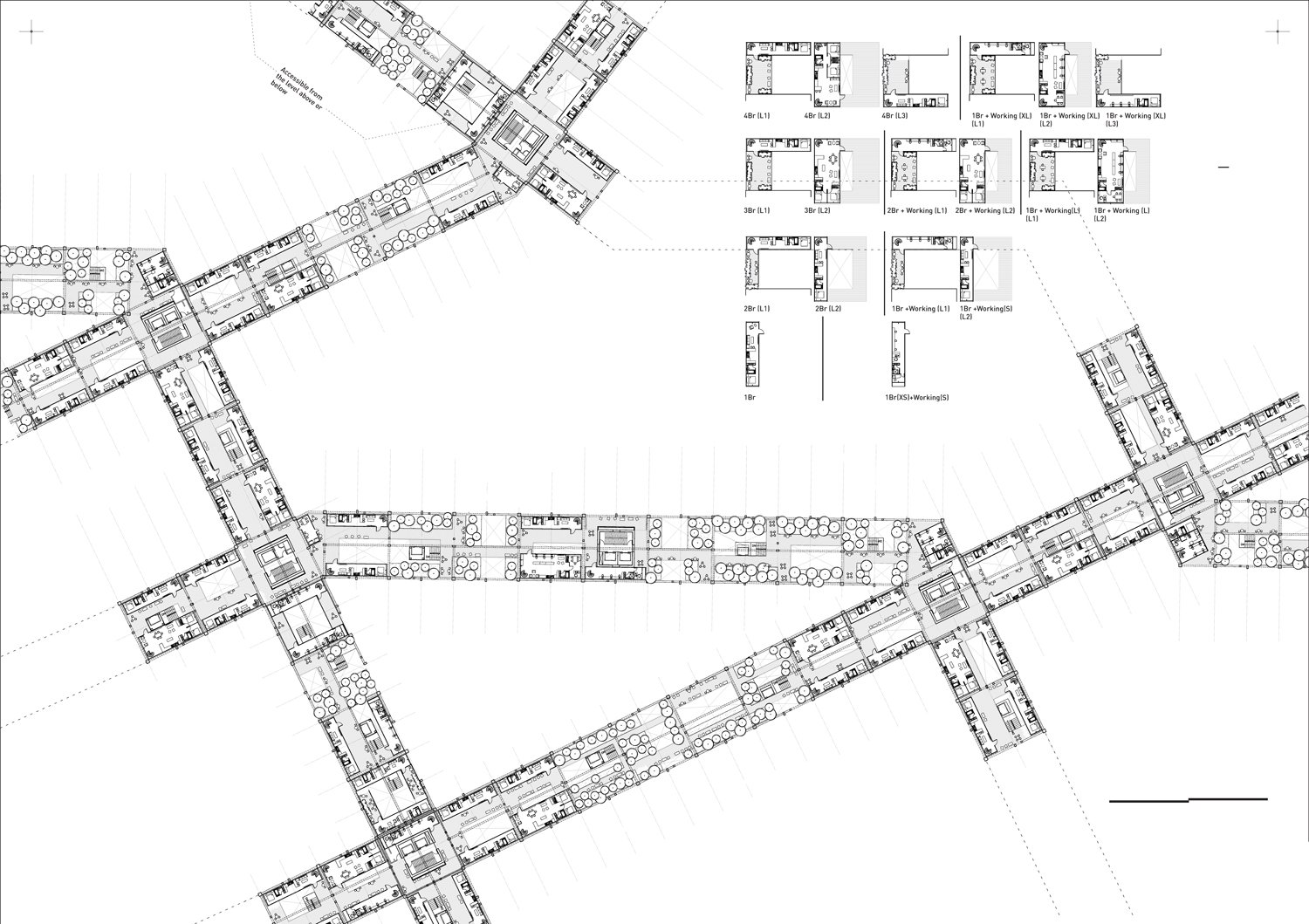 Jin Young Song, AIA, is an Assistant Professor at University at Buffalo, USA, a registered architect in New York State and a founder of DIOINNO Architecture PLLC, Buffalo and Seoul based design firm. His interest is in viewing the contemporary façade as a mechanism that integrates manifold technical and non-technical elements, thereby generating a specific relationship between people and the culture. Prior to joining the University at Buffalo, he worked as a senior designer at the SOM New York office. Song’s professional experience also includes working for OMA in Rotterdam, Sauerbruch Hutton in Berlin, and Leers Weinzapfel Associates in Boston. He received a Master in Architecture degree from Harvard University's Graduate School of Design. He is a recipient of numerous awards including Architizer A+ Awards, AZ Award of Merit, AIA New York State Design Award, AIA WNY Design Award, NYSCA Independent Project Grant Award, and Unbuilt Vision Award.