Taj Ganj Urban Redevelopment Plan
Taj Ganj is a four centuries old district. Once an integral part of the monument complex, it comprised largely of erstwhile markets selling luxury goods. Its inhabitants were the proud artisans who worked for Shah Jahan and now are their descendents; natives involved in daily wages jobs bringing in the dollars and cents and playing a vital role in providing historical information-facts, myths and half-truths. Some of these are tourist solicitors, guides, photographers and craftsmen who are involved in the world famous embroidery ‘Zaari-ka-kaam’ while some run hotels or eateries, are street vendors and transport service providers. Taj Ganj was appropriated into residential neighbourhoods called Bastis by quadrants or Katras, housing a medley of merchant mansions, domestic dwellings, public offices and prolific commercial developments and presently the site of many a heritage monument.
Taj Ganj exhibits urban decay, yet holds immeasurable vibrancy. A highly dense fabric, its crumbling infrastructure coupled with an acute lack of open spaces is juxtaposed with the richness of cultural life and socio-economic ingenuity. Its built environment expresses an amusing resourcefulness of ordinary people-the contrived and innovative ways (‘Jugaad’ crudely meaning ‘short-cuts or make do’) in which they solve their own problems albeit in an unsanitary and hazardous manner.
In India, heritage is perceived as a valuable resource and hence the approach to urban redevelopment in old city areas has been based singularly on this premise, envisaging enriching its life through contemporary design; respecting and retaining its essence and spirit and not blindly emulating the past.
The Taj Ganj Urban redevelopment project attempts to sew together disparate urban edges that are commercial, institutional, parks, bazaars, old city fabrics and slums and thus present new perspectives of the city that emerge from the multiple layers that have been created over time. The strategy advocates an inclusive policy towards the most valued stakeholders-namely the shopkeepers and local residents of Taj Ganj and primarily involves improving the street character and upgrading the basic amenities and infrastructure.
It proposes a coherent but non-uniform urban design along stretches leading to it, giving priority to non-motorised mobility through a radical change in the visual texture of the place. Recognizing the gap in the facilitation of the tourism sector, it provides creative and viable solutions at various levels aimed at uplifting this sector.
The active ‘streets as connectors’ are heirs to the cultural legacy along with the Taj as they align visitors to the ethos of the ordinary people. The streets become the axi around which all elements thrive, and thus have been refurbished as a part of the Taj Ganj project. Emerging from the Taj, they begin urban networking and eventually weave the fabric of the entire city of Agra.
The street emerging from the East Gate is textured in cobble of Red Agra, the local stone, up to a distance of ‘zero–vehicular 500 metres zone’. Then up to 1200 metres, the cobble continues in granite facilitating the restricted access of motorized vehicles. Thereafter, the road with significant institutional, cultural and leisure markers leading to Fatehabad, is pigmented concrete for vehicular movement. A 2-way carriageway of width 7.5 metres flanked by 5 metres wide footpaths and cycle paths extends up to the cobbled zone. The walk along this tree-lined path that steers clear of forested area but is inclusive of shops enroute is supplied with public conveniences, seats, kiosks, control rooms etc. The urban renewal program encourages non-motorised ones as e-rickshaws and traditional horse carriages called ‘Tongas’. Dedicated nodes and shelters for drop-offs and pick-ups at transition points ease circulation of tourists and their vehicles.
With a view to position institutions as the Taj Orientation Centre or the Mughal Museum as reference points, in the space- both literally and metaphorically, barriers between the streets and aligned institutions have been removed. The former provides information on how to appropriately experience the Taj Mahal through a program re-imagined within architecture of pavilions and gardens, the latter is dedicated to the architecture of one of the most illustrious empires in Indian history.
Backed by footpaths merging seamlessly with the road but delineated by bollards, the street is a walker’s paradise that leads to the garden of paradise. In lieu of a limitless, joint-less ‘industrial spread’ the grain of the cobbled surface addresses the human scale of the heritage precinct reinstating the unitary cobble and its role played in the larger picture.
The bold and clear monochrome of the local and identifiable Red Agra stone and ruby red granite all along the sequential journey is to make visitors move away from the chaos of the disparate buildings littering the city and reorient towards visually cohesive architecture of another time. The street becomes the processional route for a collective event in which the actors and spectators are the same, both influencing and being influenced. The homogeneity of materials makes the street and its furniture triggers a cognitive setting to the wondrous monument. The proposed dimensions, sectional profile, materials and landscape leave an absorbing, continuous and lasting sensorial imprint. The Red Agra lamp post is a sculptural element incorporating the proportions of the framing minarets of the Taj and the profile of its graceful dome. Through the use of Jaalis-perforated screens and their play of light, they add a measure of romanticism to the street character. The ambient bollard lighting brings to the forefront, the granular texture of the cobble.
Taj Ganj reiterates its responsibility of giving a red carpet welcome to visitors who come to experience the Taj. 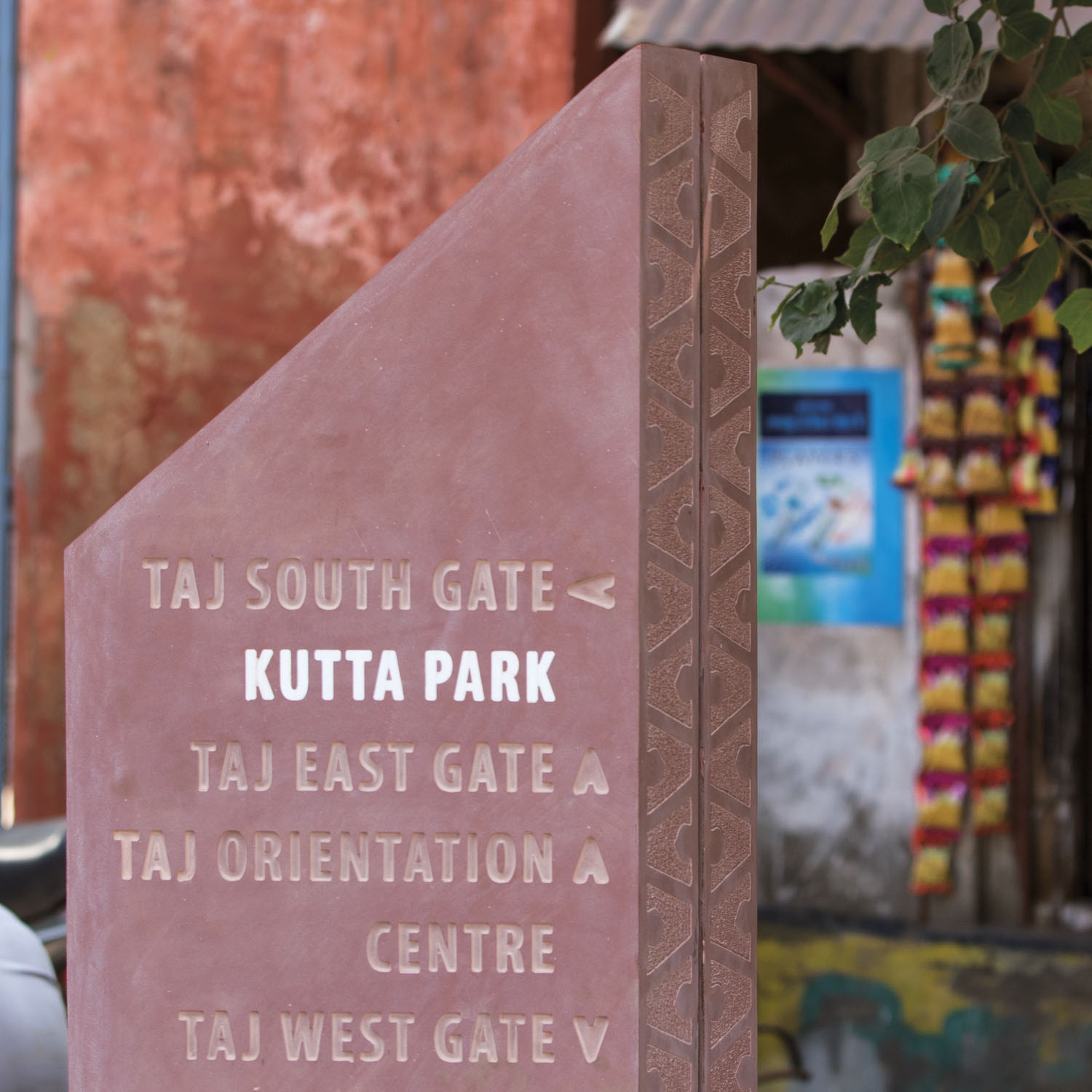 Sourabh Gupta is the Founder & Managing Director of Archohm Consults, one of India’s leading architectural design firms. He is an alumnus of CEPT, Ahmedabad and Technical University, Delft, the Netherlands. Archohm was conceived as a design studio that offers design consultancy for architecture, urban design, interiors and product design. Working across diverse scales, from furniture to urban infrastructure projects, Archohm’s ‘mad and fun’ philosophy promotes it’s out of the box design solutions. With over 12 years of experience in Architecture and Urban Design, Sourabh is renowned for his capabilities in conceptualizing, designing, and detailing. With his passion and a keen insight into the diverse design fields, he leads his initiatives towards the highest level of design quality.