PROJECT STATEMENT
For thousands of years, long before Shanghai evolved into a global metropolis, Suzhou Creek dominated the landscape. Centuries of human manipulation sought to contain the creek, transforming it from a key feature of the watershed into a highly engineered canal. Suzhou Creek is often credited as one of the primary drivers of Shanghai’s modern industrialization, but for generations of Shanghainese it is remembered as a wasteland. Cholera, typhoid, dysentery, and other diseases were rampant, disproportionately impacting the city’s poorest and most vulnerable. With a grant from the Asian Development Bank, the waterway is now clean and ready to reclaim its role as a centerpiece of the city. But with the south bank in the wealthy and cosmopolitan Jing’an District and the north bank in the socially underrepresented Zhabei District, Suzhou Creek remains a physical and mental divide that underscores the dichotomy of contemporary Shanghai. The master plan unifies 12.5 kilometers of prime waterfront as a catalyst for the renewal of a once disenfranchised community, addressing vast physical and social gaps in the city’s fabric.

PROJECT NARRATIVE
HISTORICAL CONTEXT
Before the various concession districts of modern Shanghai resulted in the former fishing village’s rapid modern expansion, the 53 kilometer-long Suzhou Creek was an important transportation and shipping link to the sea. In 1842, when the Treaty of Nanjing was signed to end the Opium Wars, a flood of entrepreneurial expats began to arrive in Shanghai, accelerating the transformation of the creek as the city developed. By the beginning of the twentieth century, Suzhou Creek was the lifeblood of commerce in Shanghai, supporting a variety of factories, industrial piers, and passenger wharfs.

POLLUTION AND NEGLECT
As Shanghai’s official population expanded to over 23 million by 2015, Suzhou Creek was at the center of the industrial and commercial growth of the city. Though this economic expansion arguably improved lives as a result of the city’s increasing prosperity, it came at great environmental cost. Untreated industrial wastewater and direct discharge from the Shanghai’s combined sanitary and storm sewers earned it the nickname the “black and stink”. In 1996, the Asian Development Bank invested over 6 billion Yuan into a multifaceted approach to improve water quality.

PRESENT-DAY CONDITIONS
In 2015, when Jing’an District and Zhabei District combined, this jurisdictional change created another remarkable opportunity to unleash Suzhou Creek’s potential. A master plan for the central section of Suzhou Creek was commissioned to explore its future impact on the evolving city. Intensive ecological research and rigorous analysis of existing conditions along the creek revealed a waterfront that was blocked by industrial and infrastructural uses, lacked visual access and connectivity, and offered little biological value. A clear lack of public space along the waterfront and weak pedestrian connections demonstrated the need for a robust public realm with the potential to unify miles of complexity along the creek.

EXPANDING THE WATERFRONT
The plan focused on expanding the perceived waterfront of Shanghai into the urban blocks adjacent to the creek. To overcome both the tangible and psychological divide that Suzhou Creek created, a design strategy centered on the concept “push, pull, bridge, extend” drove the plan’s physical expression. By “pushing” into adjacent neighborhoods, an extension of the creek’s linear landscape provides more open space for public use and acts as a connective tissue to bring people to the water. “Pulling” both existing and new commercial and cultural program towards the waterfront promotes activities leading to the water’s edge and enhances the sense of orientation to the creek. “Bridging” over the creek encourages pedestrian flows between public spaces on both banks and overcomes existing physical barriers. Finally, by “extending” the public realm along Suzhou Creek further into adjacent city blocks, the energy of the waterfront radiates beyond the banks of the creek via open space connections into interior parcels.

STRATEGIC CONNECTIONS
The reclamation of Suzhou Creek waterfront for public use creates a civic/cultural watershed that is delineated by recreational waterfront edges and a vibrant urban frontage. Isolated neighborhoods are re-energized with new mixed-use development, and pedestrian connections to nearby destinations including Shanghai's central railway station and the popular M50 Arts District are strengthened. By avoiding the preconceived idea of the creek as an exclusively linear experience, the plan reorganizes the singularity of the waterway into multiple episodes of urban nodes and parks that anchor rhythmic moments along the creek. New pocket parks alongside the creek and within existing neighborhoods are spaced no more than 500 meters apart, responding to the long-held desire for more vibrant, community-oriented open spaces. Within the adjacent neighborhoods, Shanghai’s unique vernacular architecture and intricate pedestrian networks are preserved with minimal, strategic interventions that transform them into new mixed-use destinations that retain their existing character.

EDGE CONDITIONS AND ECOLOGY
A roughly two meter high floodwall, which is the predominant existing condition alongside the creek, acts as a physical, visual, and ecological barrier to the waterways’ possibilities. The plan proposes a variety of modifications to the floodwall, while maintaining its functionality. Adjustments include raising the ground level alongside the levee to create a shared path offering river views, and eliminating creek-side roadways to create space to push the floodwall back, creating a more gradual slope to the water. Where space allows, wetland terraces are introduced to restore native habitat and mitigate the impacts of occasional flooding. 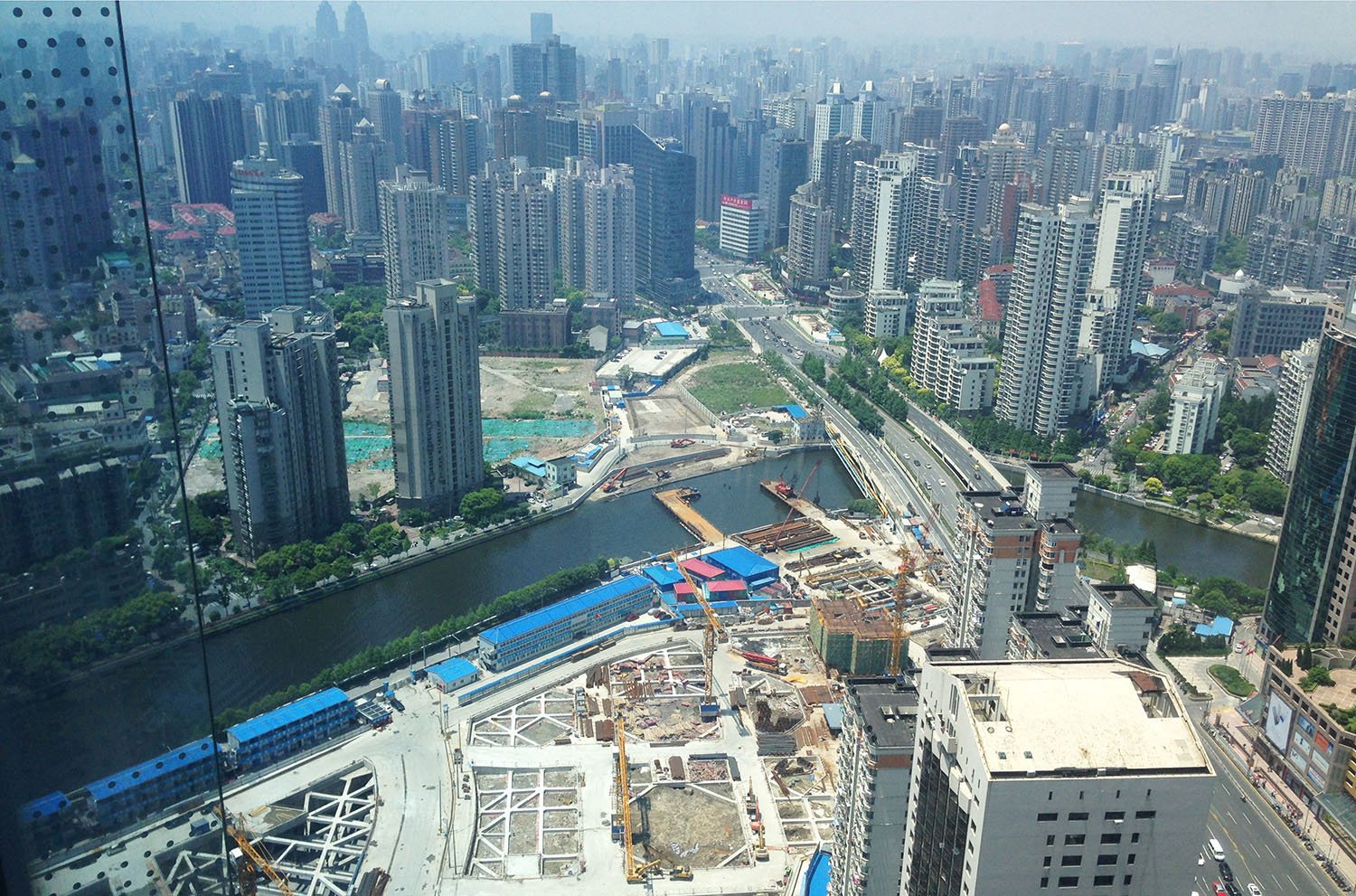 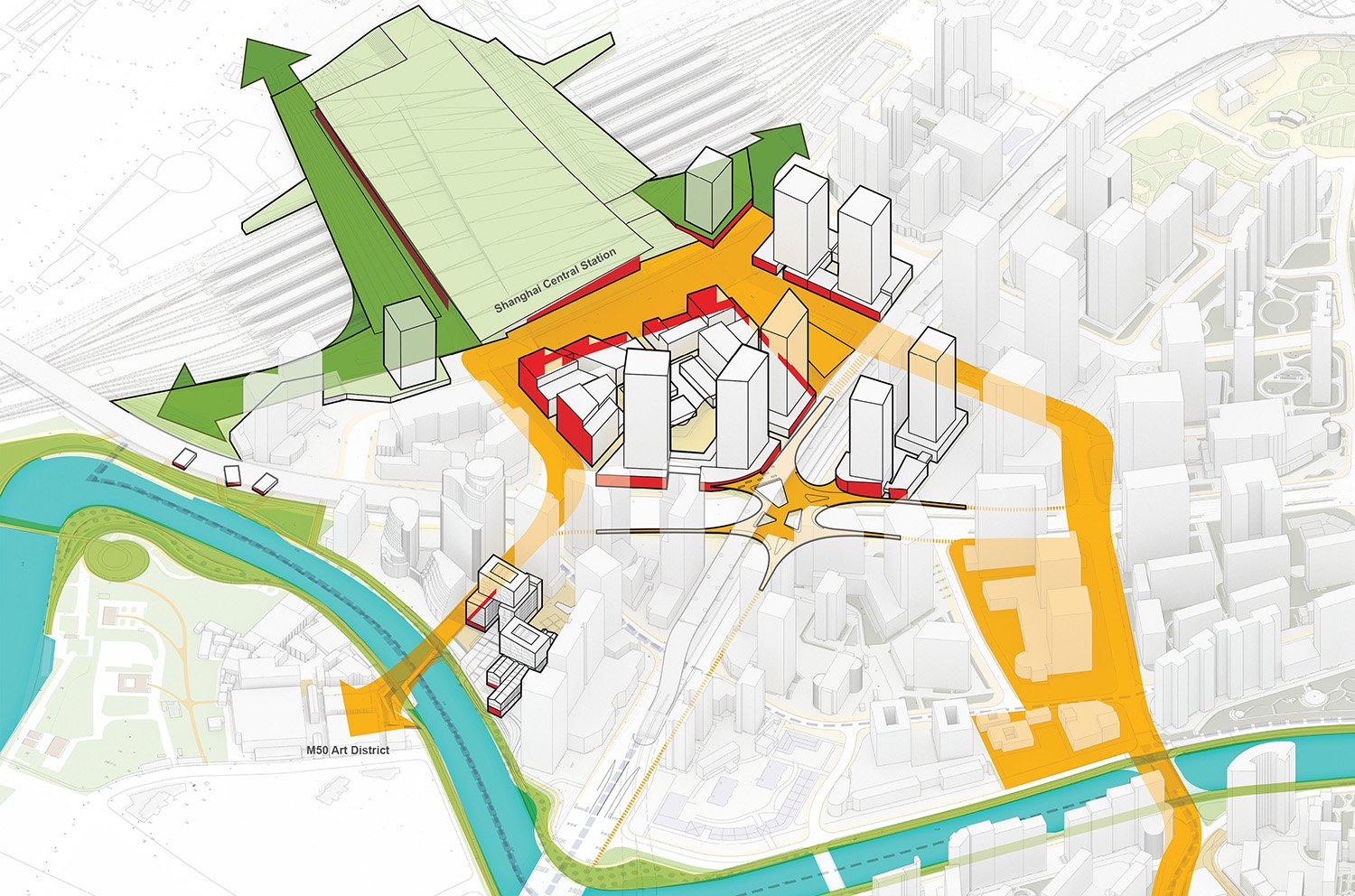 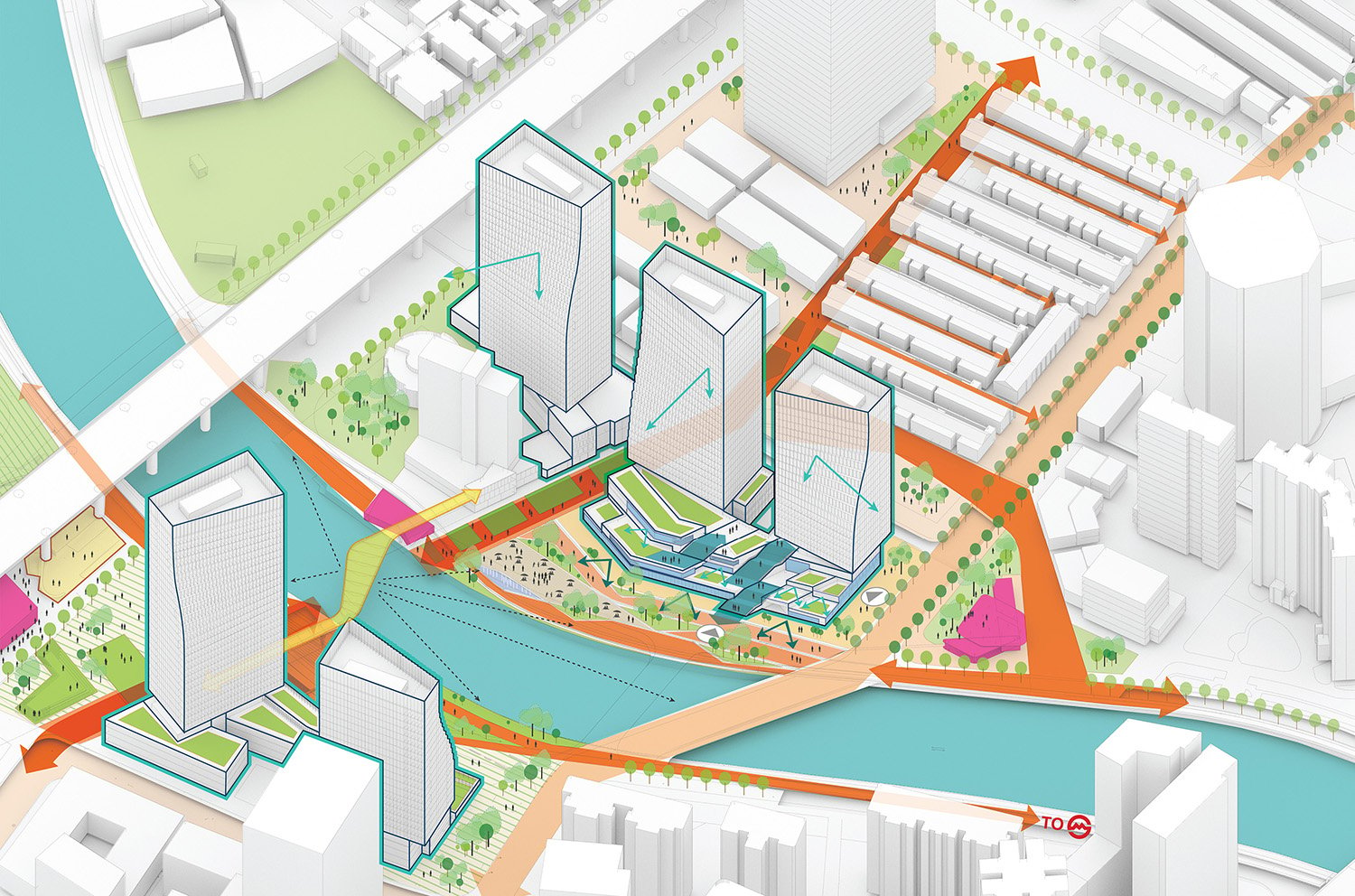 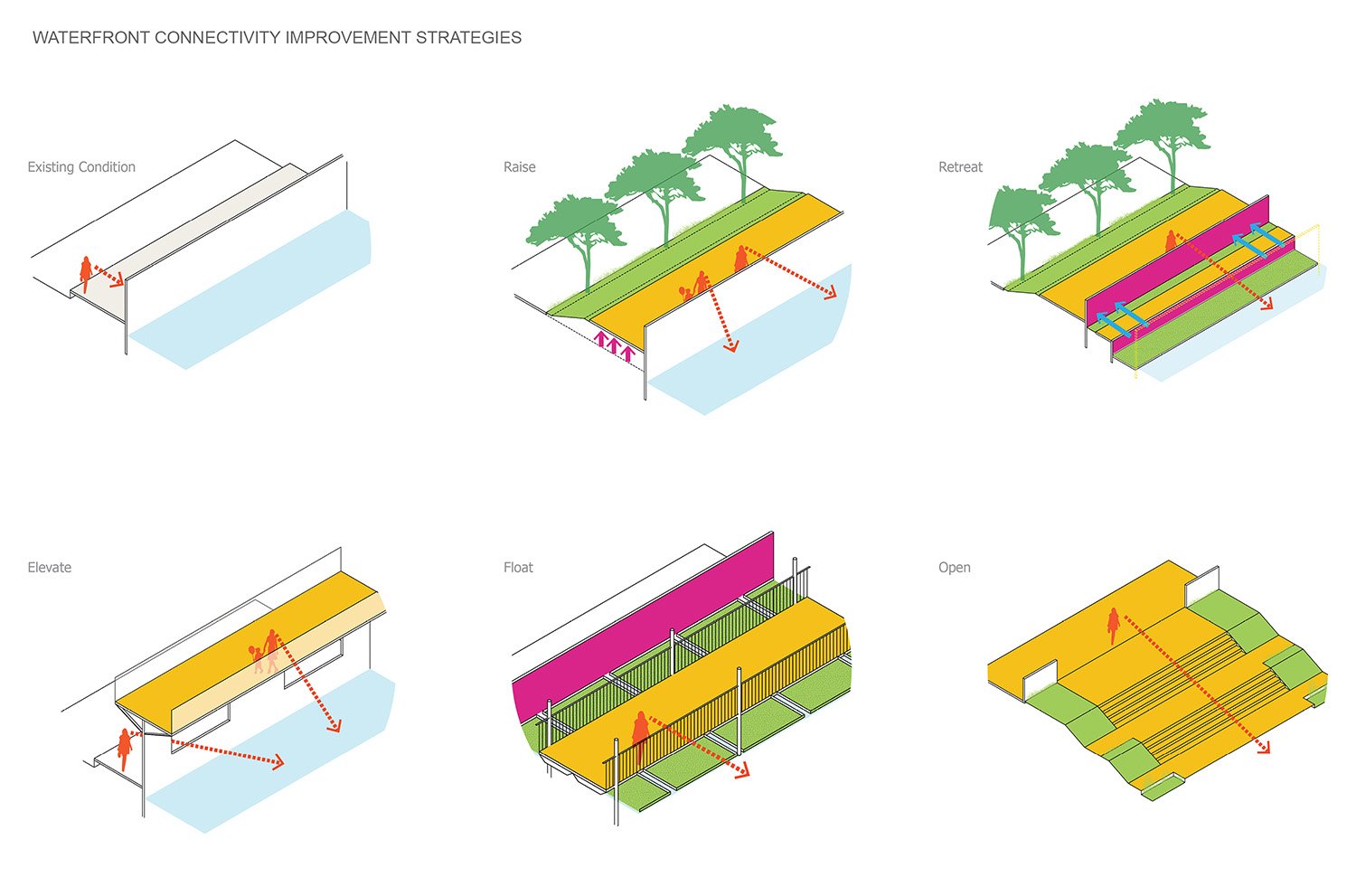 At Sasaki, we believe in the transformative power of place. Places transcend physical spaces, becoming the context and the content of our experience of life. For over sixty years, Sasaki has brought together the best of landscape architecture, planning, urban design, architecture, interior design, civil engineering, graphic design, place branding, and data science to shape the places in which we live. This unparalleled legacy has been acknowledged by over 750 design awards, including the Firm of the Year from the American Society of Landscape Architects and the Planning Firm of the Year from the American Planning Association – the only firm to win both high honors. Together, our ideas create lasting value to clients and communities.

With offices in Boston and Shanghai, we are a diverse practice of 270 professionals who share a singular passion for creating spaces and places around the world that prove human potential, redefining what’s possible along the way.