Shanghai is home to nearly 24 million people. That’s a lot of mouths to feed. But over the last two decades, China has lost over 123,000 square kilometers of farmland to urbanization—a land area equivalent to nearly the entire state of Iowa. Of the arable land that remains, it is estimated by China's own Ministry of Environmental Protection that one-sixth of this land—roughly 200,000 square kilometers—suffers from soil pollution. Something’s gotta give.

As one of Asia’s most dynamic megacities, Shanghai is actively encouraging innovative solutions to provide food for the growing region. Unlike Western examples of large-scale corporate farms which are typically located great distances from cities, allowed the growing metropolis to carefully manage agricultural resources, while also ensuring greater agricultural biodiversity. Like other cities in China, however, rapid growth is threatening this long-established system, resulting in a significant loss of agricultural land within city limits. Sunqiao—a new approach to urban agriculture—seeks to shift the paradigm.

Located between Shanghai’s main international airport and the city center, Sunqiao illustrates that, like the city’s soaring skyscrapers, its farms are also going vertical. After 20 years of conventional agricultural production on the site, Shanghai is expanding the role of Sunqiao in its foodshed. The new plan for the district, slated to begin construction in late 2017, focuses on the integration of vertical farming systems in conjunction with research and public outreach. The result is an interactive, playful, and socially-engaging experience that presents urban agriculture as a dynamic living laboratory for innovation and education.

Shanghai is the ideal context for vertical farming. Like many global cities, land prices are high, which makes building up rather than out the economically prudent choice. Even more significant is the Shanghainese diet, which typically consists of up to 56% leafy greens. Think spinach, lettuce, kale, arugula, mustard greens, bok choi, watercress, etc. Leafy greens are also an excellent choice for hydroponic and aquaponics growing systems. They thrive in the simplest of setups, and don’t need a lot of extra attention. They grow quickly and weigh little, both of which make them an economical and efficient option.

While one goal is to position Shanghai as a leader in urban food production, Sunqiao is more than simply creating vertical food factories. Providing a robust public realm that merges indoor and outdoor agricultural experiences, the Sunqiao experiment presents a new idea for urban life by celebrating food production as one of the most important functions of a city. Sunqiao not only addresses Shanghai’s increasing demand for locally-sourced food, but also educates generations of urban children about where their food comes from. 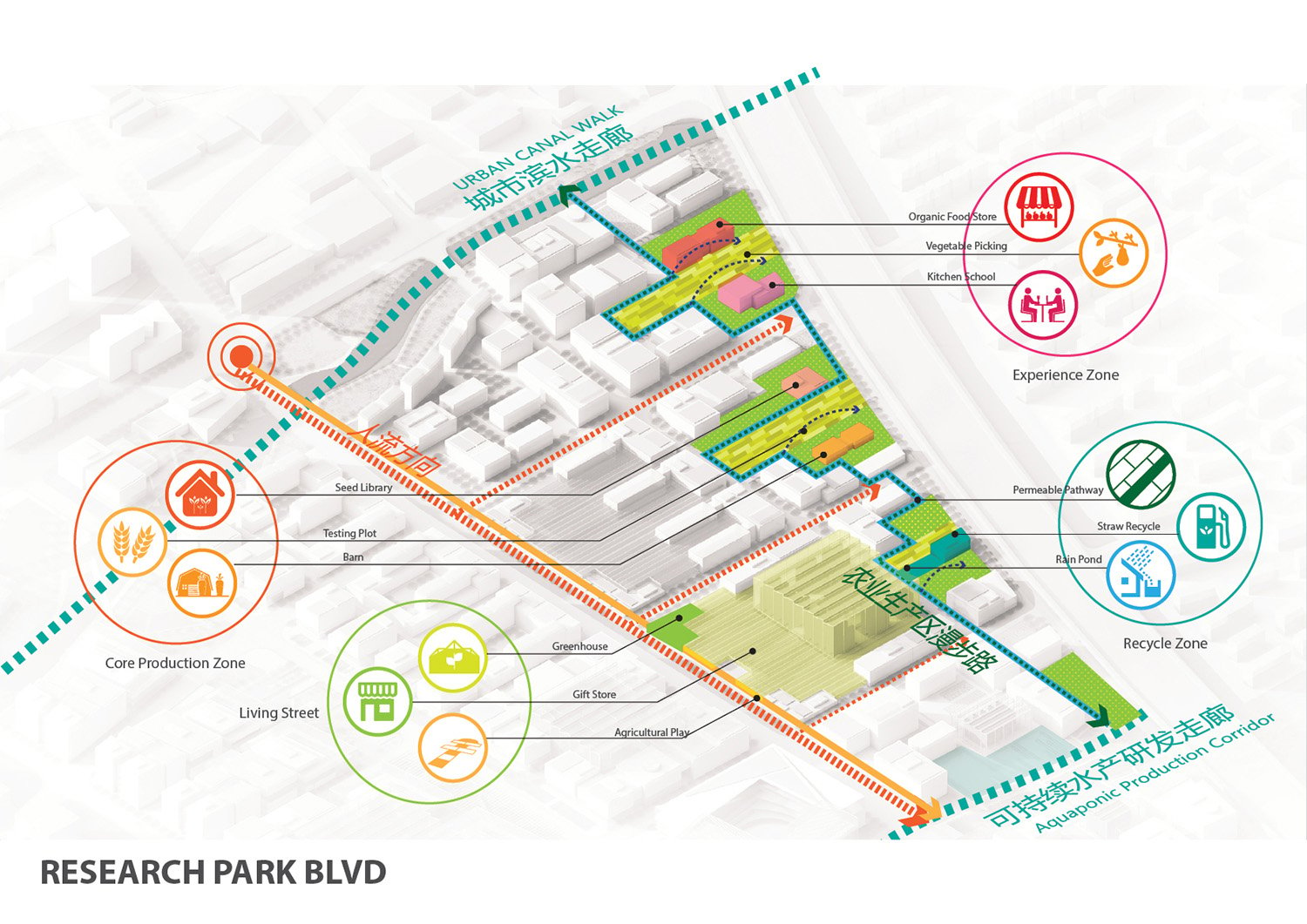 Sasaki comprises architecture, planning, urban design, landscape architecture, graphic design, interior design, and civil engineering, as well as financial planning and software development. Among these disciplines, we collaborate in equilibrium, and each is recognized nationally and internationally for design excellence. On our teams, practitioners from diverse backgrounds come together to create unique, contextual, enduring solutions. Our integrated approach yields rich ideas, surprising insights, unique partnerships, and a broad range of resources for our clients. This approach enables us to work seamlessly and successfully from planning to implementation. While our disciplines offer depth of expertise, our studio structure engenders breadth, innovation, and interdisciplinary collaboration. From our headquarters in metro Boston, USA, and with an office in Shanghai, we work in a variety of settings—locally, nationally, and globally.