Humankind has been crafting settlements for over thirty thousand years. To provide security and later to advance craftsmanship, cities were created around ten thousand years ago, at first lined with massive protecting walls, that later dissolved into encircling roads. Then came long roads that ran through and connected multiple cities (road cities). In fact, the car was a determining factor of city growth and development. Roads were designed according to the automobile, the cities were designed according to the roads, and the buildings became uncharacteristic in every part of the globe. In the 20th century, people have returned to their “factory settings” to break the hegemony and obsession of fossil-fueled cars.
To plan for the 21st century, cities built before and after the automobile’s domination were studied to find a joint synthesis. A layout designed for logistic requirements was created: a small number of narrow streets, suitable only for small electrical vehicles, specified hours of use, and an arrangement of buildings that increases ties with their neighbors to improve servicing.
Media City began as a site specific design for a multimedia based industrial complex and has evolved into a new method for providing urban planning solutions that could be applied globally. The project aims to combine all the elements of multimedia industry, not just those related to production or mass distribution. Though critical, these are just part of the process that Media City will look to address. In addition to printing offices and warehouses, Media City will have shops for direct end user purchases, stages and halls for live performances, interactive museums and libraries for preservation, schools and workshops for education, and naturally residential amenities for those who will work and play there. It will be a vibrant and engaging habitat where people can witness the design, production, and application of virtual reality and multimedia products.
While developing the concept, many large historical cities with industrial roots—Istanbul, Rome, Barcelona, Paris, New York—were researched and investigated for their mass-space properties. During this process, some analogies with QR codes were found. Media City quickly became an examination of not only urban grid plans but the QR code’s matrix system as well. This led to the idea of making a mass-space balance within a controlled border by using an algorithm that would define urban elements like streets, squares, blocks, courtyards. Different masterplan options could be generated by varying QR codes and sizes of grids. So modules mimicking QR codes were created with similarities to typical elements found in major urban locations; these modules can then be manipulated for the creative process of city planning. Different “QR code” modules are developed for different urban patterns.
The masterplan for Media City would then share characteristics of typical QR codes; this approach can easily be echoed for application in virtually any environment around the world. The city’s center would be very dense and composed of small elements. This recognizes the variety of activities and services needed as well as establishing humans/pedestrians as the primary scale for the center.
In addition to the innovative QR-grid pattern planning, Media City will be identified as an example of excellent use of different smart city strategies. Smart Energy-Water-Waste Management, Smart Transportation, and Sustainable Green Integration are just the starting points for designing a responsible and eco-sensitive urban site. The project will implement these in its own design and will also encourage residents and users to develop behaviors that are more conscientious and forward looking.
Smart Energy-Water-Waste Management is based on intelligent source production and use/reuse practices. Media City utilizes clean energy producing technologies and fosters an energy saving lifestyle. Solar panels and wind turbines will be major contributors for clean energy, and the site will contain high-efficiency, low consumption lighting and appliances throughout. Water management will be guided by preservation strategies. Rainwater will be collected and treated for various uses. Waste collection and diversification will also be progressive and mindful of the environment; the collection of the waste will be done by electric waste vehicles, reducing the carbon footprint. And not only will the footprint be reduced through the waste collectıon, as part of the Smart Transportation strategies, self-driven, completely electric or hydroelectric automobiles, buses, and commuter rails are envisioned as the standard for Media City. Though there will be low emission public transportation, the layout will encourage walking and bicycle use. Media City will have many ecological corridors and multi-use parks, and conservation of natural vegetation will be a high priority. Green roofs and facades will also be standard design elements of the buildings.
Over the last century, there have been major changes to our culture and daily lives, thanks to countless advancements in media and technology. Media City was envisioned as a way to bring together all the aspects of the multimedia and, with innovative planning and structures like virtual reality museums, allow people to bear witness to its past, present, and future. Both the process used to create Media City and the end result represent a creative, innovative, and green approach with global application potential. 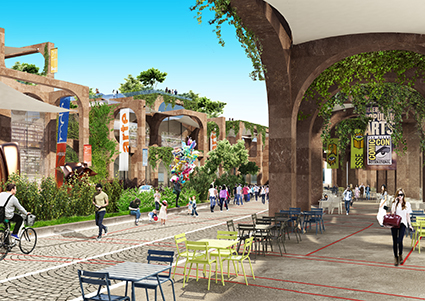 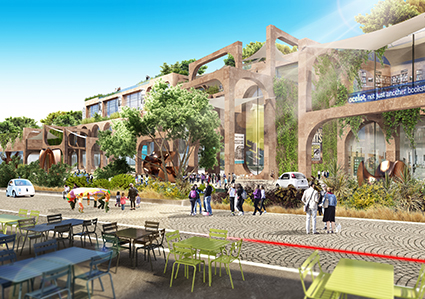 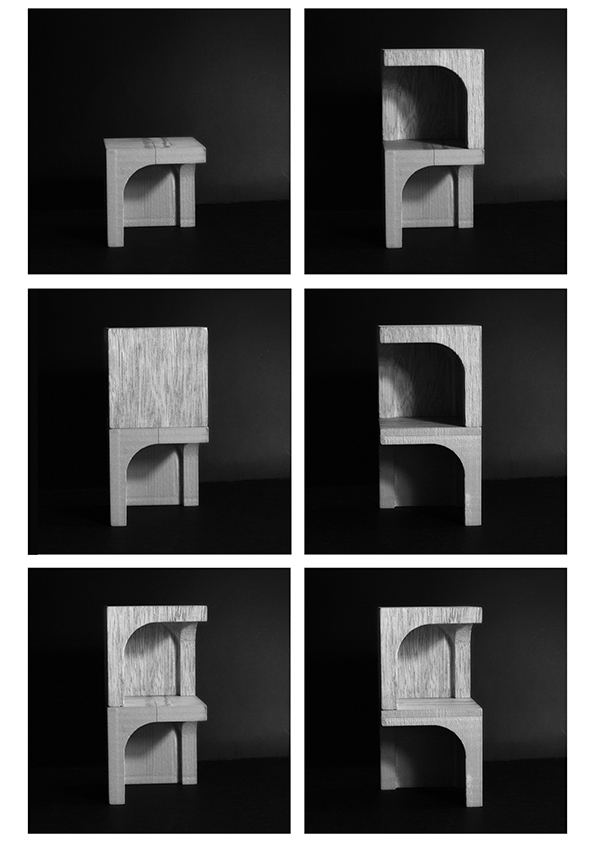 GAD is an contemporary architectural practice based in Istanbul, New York, Bodrum and has been a leader in research and concept design since 1994. The firm is headed by design principle Gokhan Avcioglu, who works with a team of dedicated staff comprising of architects and global collaborators. GAD believes that current architecture and urbanism are influenced by media, culture, software, consumer habits and consumer behaviors. This belief leads the practice's development which is centralized around the understanding of how these factors affect the built environment at differing scales. GAD's success lies in its methodological research of the client's programmatic requirements, its iterative process of digital and physical modelling, and meticulous process innovation. GAD understands that architecture as a practice relies on understanding historical precedent, as well as research, experimentation and continually finding new ways to combine these in compelling and thought-provoking ways.