The design process of Çukurova Regional Airport Complex is conditioned by a number of contextual parameters. The notion of ‘place’ can easily be described as the main driver. The existing natural texture and the dominant agricultural character of the region were prioritized as crucial criterias. Spatial impact of the terminal to its users, the first impression of the city carried by the building or the lasting residue of this place in the imagery of the passenger heading his destination were also important sensual facts in design agenda. Another specific intention of the building was challenging the environmental difficulties and minimizing energy usage that a building of this scale can produce. In this manner, creating a sustainable airport that has ecological concerns and inclinations was kept as a sub-context in the design.
In design process of the terminal structure and the supplementary structures which were proposed to service 10 million passengers in the first ten year phase; relationship with the natural context, sustainability of the existing agricultural texture and a number of conflicting concepts like harmony-contrast, decomposition-articulation were dialectically filtered. On the other side, the environmental damage caused by recent large scale projects, especially heat island problem created by large surfaced roofs and open air parking areas, is detected as important reasons for global warming.
Formation of a“topography-building” is proposed as the most suitable approach to meet the facts of the context and place. The main green shell acts as a second roof that fade away and become permeable at some places in the passenger terminal and the multi-storey parking buildings and allow natural air ventilation in space. Thus, it was aimed that the energy consumption for summer cooling would be reduced by creating a microclimate by these breezy voids. Produced with similar ecological intentions, large inner gardens form attractive perspectives inside the main space, carry the sunlight to the furthest corners and also allow the air to freely circulate in the building by cross ventilation.
The building, designed in this sensorial manner, also fulfills cognitive criterias like building capability and economy, the perfection of the passenger-baggage flow, the easiness of management and maintenance, growth, flexible use opportunities, fully and without any errors. Inside the open and spacious spaces of terminal, a continuous visual flow is made possible through the designed voids of the gallery as well as dynamic inner space in which the movement can be observed from anywhere.
Meeting economical optimization criteria and architectural tendency at the same time, the building is designed as a reinforced concrete structure that would exhibit itself fully naked, without any finishing material like stucco or paint. These placid materials sustains the problematization rooted in the mass design of the building to the design of inner spaces. In this manner, it was aimed that the large passenger hall would be modest in the economic value of the materials but assertive in the volumetric impacts of the materials.
Instead of a normative building, Çukurova Regional Airport Complex emerges as a man-made topography on its site. This large “covering”, slightly shaped by the programmatic needs and masses of the buildings below and allowing the sunlight to come in to the inner areas through wide slots, makes the building invisible as it collides the surrounding natural texture with the building. A large portion of the landscaping layer on the covering is an extensive green roof which doesn’t need any maintenance in time. The geometric bands on the covering arranged using endemic plants, references the agricultural context which is found in the surrounding area. This effect is strengthened with the permeable textures partly placed on the overlay. At the top of the multi-storey garage as it gets close to the ground, the covering alleviates and transforms into a rigid pergola that protects the underneath from the effects of sun, then touches the ground slightly. By this, it is intended that the covering would blur in time and almost merge into the nature slowly. Just as Le Corbusier said, looking at The Çukurova Regional Airport Complex from far away, only sky, grass and landing field is visible. 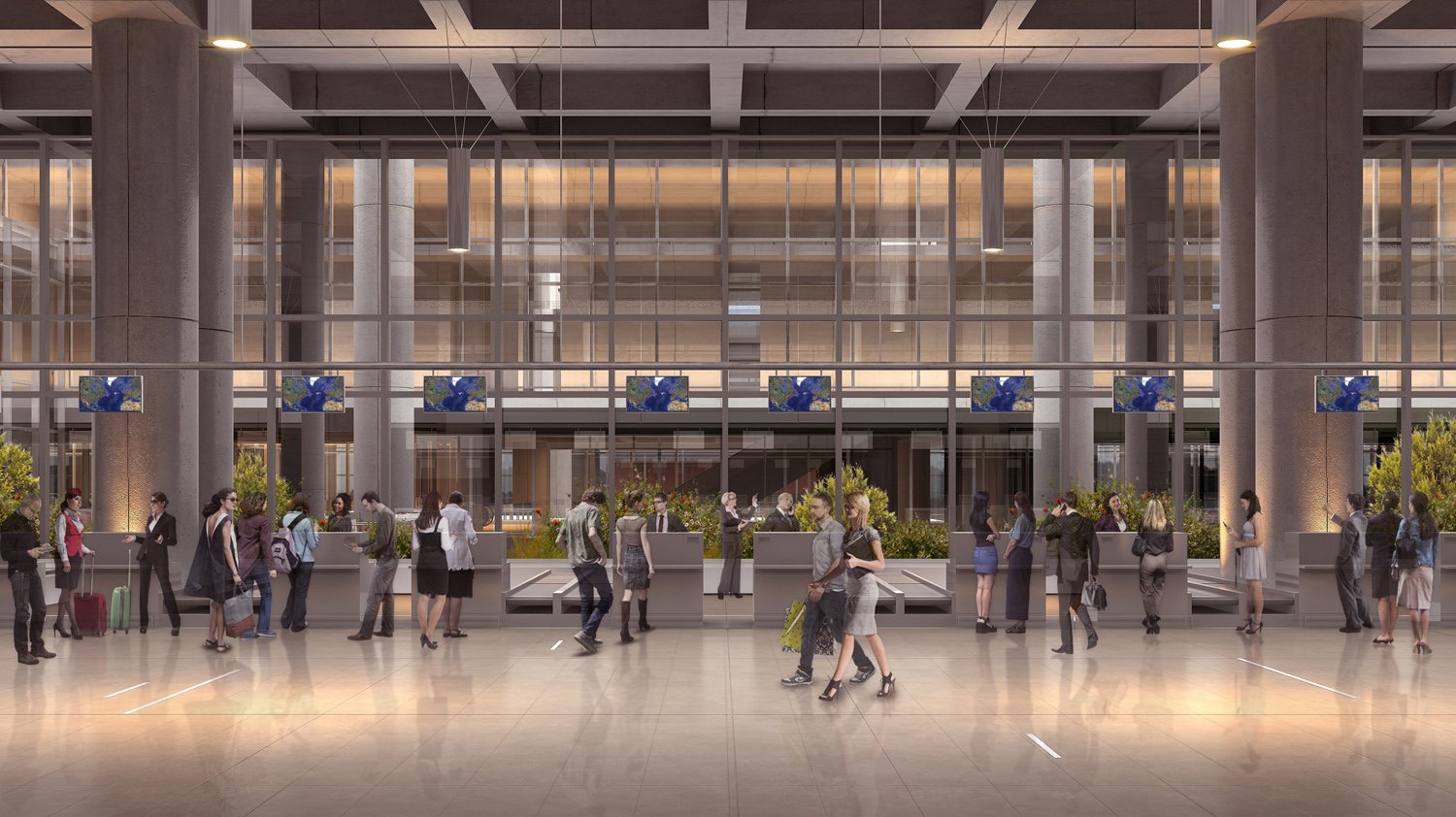 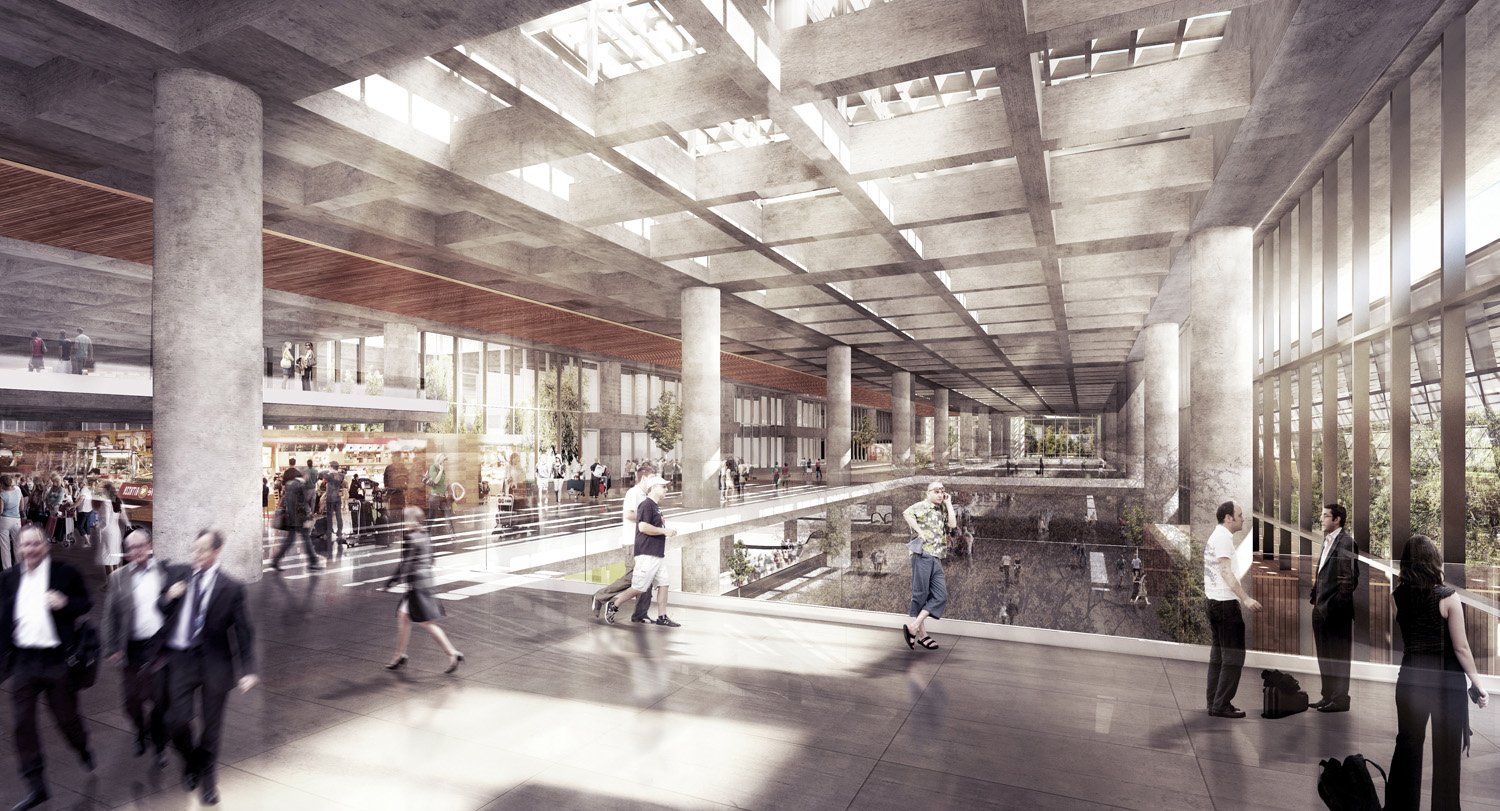 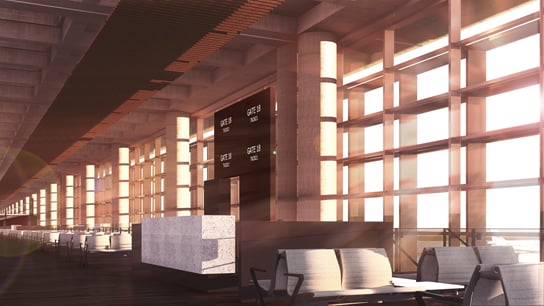