House of The Connoisseur (The Infill House) History of Building and Context

The area of Joo Chiat is well-known for its multicultural heritage. It derives its name from plantation owner and philanthropist Chew Joo Chiat, from the roads in the area named after him.

In the early 20th century, significant Peranakan and Eurasian populations moved into Joo Chiat alongside the Chinese, Malay and Indian communities. Renowned and loved for its diverse and interesting mix of architecture, history, culture, activities and established Eurasian and Peranakan communities, the Katong/Joo Chiat area was regarded as an attractive residential suburb. The types of homes range from rows of colourful and distinctive shophouses to kampongs, and terrace houses to grand seaside mansions dotted along the coastline.

In the 1900s, people started to move to the east from the crowded city center, thereby resulting in a population boom. As demand for land went up, plantation lands were soon subdivided. At about the same time, Peranakan families began to settle in this area, and started building the shophouses that Joo Chiat is known for today.

In 1993, Joo Chiat was gazetted as a conservation district. As a result, shophouses and bungalows reflecting the typical architectural styles of the turn of the twentieth century have been preserved, as well as many unique and straits eclectic style Chinese shophouses which give the area its true flavour. The area is also known for eateries specialising in Peranakan delicacies.
In 2011, Joo Chiat is declared Singapore's first Heritage Town. It is chosen, in part, because of strong efforts to promote its Peranakan culture.

Today, Joo Chiat’s multi-ethnic influences are most prominent in its architecture and dining.
Unit 127 used to be the residence of the late artist Ng Eng Teng until his passing in 2001. He is known as the Grandfather of Singapore Sculpture, known for his figurative sculptures, many of which are found in public locations around Singapore.

The most recent renovation was done in 2004 (as shown in archive drawings).

THE CHALLENGE OF THE CONTEXT

The house is an existing shophouse in a secondary settlement conservation district of Joo Chiat. Bordered and flanked on both sides by terraced units, the site has limited exposure to light and ventilation; to views and vistas. With this in mind the task is to design an intervention into this “in-between” space, to afford it the engagement of the outdoors, bringing a sense of the outdoors in whilst retaining the heritage feel of its locale and history; and working within the physical limits and constraints of the space to magnify and expand the perception of the boundaries. All this is to be done whilst carefully ensuring a harmonious dialogue of old and new – in both design and construction process.

The task at hand is to design a home, to develop a domestic space catering to the needs and requirements of a small family with a modern lifestyle. As they entertain quite often, a flexible space and good size kitchen are some of the prerequisites set by the client. Together with this, another part of the house is envisioned to be a showcase of the client’s hobby collections – being an aficionado and connoisseur in their fields of interests.

The basic programs presented themselves as a challenge to engage the context as it is set within a heritage district, to provide for a sustainable approach of infusing and breathing new life into an existing abode of historic value.

THE APPROACH AND STRATEGY

Nestled in this alchemic mix of heritage premises and a modern lifestyle, the challenge is to intervene with the use of “infill elements”, inserted into the spaces within and outside of the shell of the existing heritage shophouse. The foremost infill element is the insertion of the courtyard void, and together with this, various solid form infill elements are composed and carefully orchestrated and juxtaposed. The next is the new block which acts as a counterpoint to the conservation block – although height control permits a maximum of 5 storeys – we opted for a proportionately ‘friendly’ massing of 3 storeys which can house a variety of ceiling heights. The remaining infill elements are then designed to be either secondary spaces (e.g. wardrobes, study, vanity, service boxes) or sometimes circulation spines (e.g. stairwells) within the main infill containers – celebrating these spaces with the use of form, material, texture, and detail whilst freeing up the main spaces as indeterminate and flexible for their desired use.

THE MATERIAL AND DETAILS

To accentuate and imbibe the design with a sense of its rich heritage and culture; to not detach it from the charms of its locale, the subtle use of design cues from Peranakan culture are considered into the design of the infill elements. Filigree screens of timber strips – arranged in an abstract diagrid pattern – filter the tropical light and allow for the breeze to pass. Similarly a mesh screen, in the same diagrid pattern, is pleated and orientated, rendering a layer of enclosure at the rear facade, the mesh angled for privacy without compromising views. Two finely detailed spiral staircases wind up each of the blocks, perhaps in their own way, a nod to the pedigree of art and sculpture of its talented past resident. 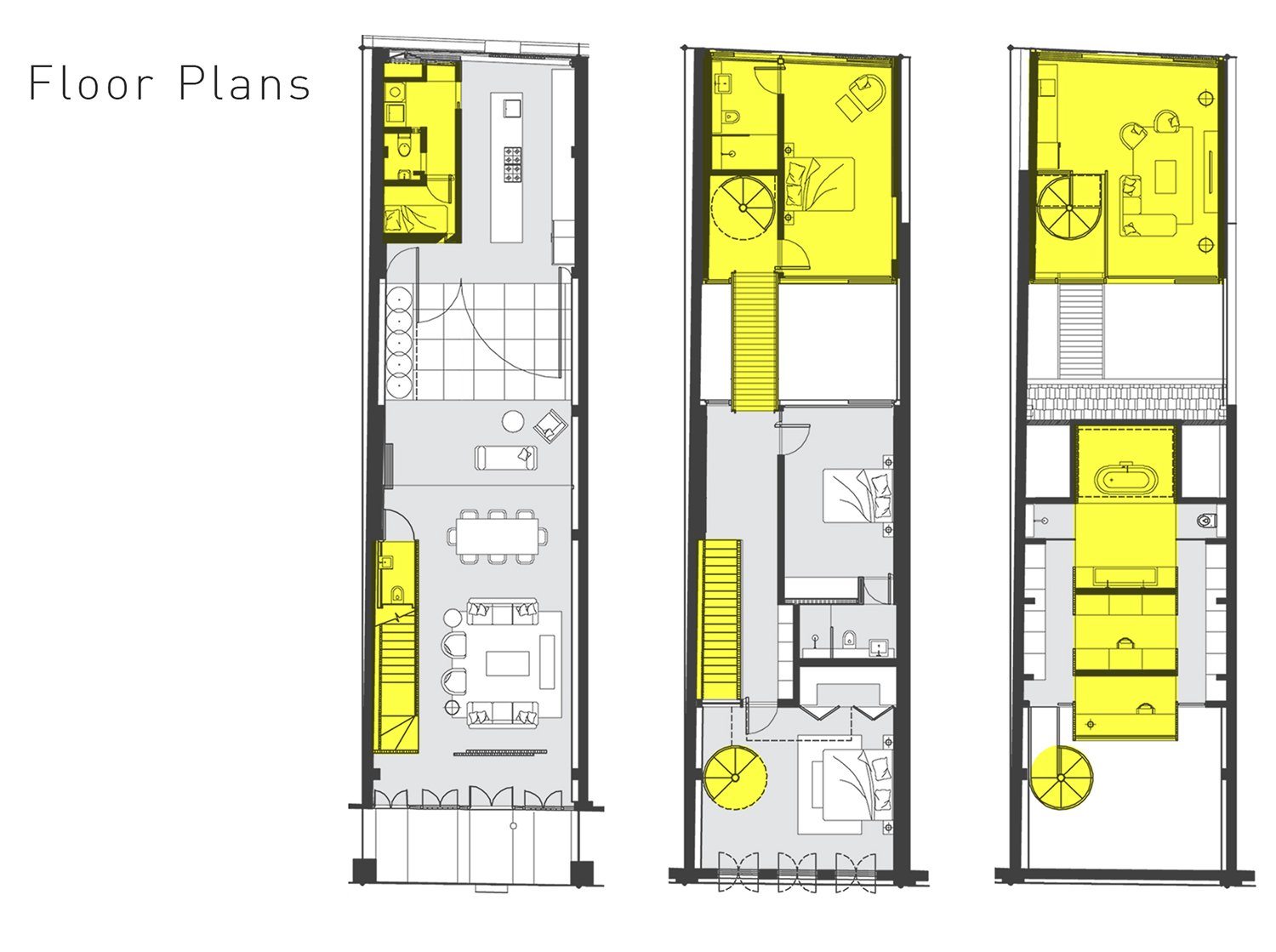 Operating in a studio-like setting, RT + Q is built around a small group of individuals, each with a particular expertise in the separate aspects of the practice. RT + Q believes that the execution of architecture is essentially a collaborative effort and a synthesis of various talents.

RT+Q’s works have been honoured in Singapore and internationally.Awards and mentions received include those from the SIA Architectural Design Awards, the URA Architectural Heritage Awards and the PAM Awards (Malaysia).