The design for the Strasbourg Palais de la Musique et des Congrès by Austrian architectural firm Dietrich | Untertrifaller and French firm Rey-Lucquet & Associés combines the two existing music halls from the 1970s and 80s with new buildings to create a harmonious ensemble with a distinctive architectural identity. The expansion and general renovation of the convention center involves the construction of a 3,000 m² multifunctional hall, a conference hall for 450 people, and a 520-seat auditorium, the expansion and conversion of two existing concert halls, plus a new rehearsal hall for the Strasbourg Philharmonic orchestra.

For their design, Dietrich | Untertrifaller and Rey-Lucquet decided to further develop and expand on the existing central motif of equilateral triangles. They also created a completely new silhouette with the new buildings and stainless steel arcades. The architects integrated as many useful functions as possible into the existing buildings and continued the use of the typical hexagon in the new buildings. A central foyer with air spaces, galleries and bridges unites and connects the concert, conference and exhibition spaces. This clearly arranged and open spatial design simplifies and structures the complex's functional processes and provides visitors with improved orientation. The architectural concept is also visible on the façade: An almost kilometer-long arcade wraps around and encloses the entire building complex, giving it a distinct profile. The fifteen-meter high and six-ton steel columns covered in angularly folded stainless steel sheets form an attractive, dynamic outer shell with their twisting rhythms.

The capacity of the Auditorium Schweitzer was expanded from 900 to 1,200 visitors and the 1,900-seat Auditorium Erasme was optimized for concerts and conferences. Located just to the west of these two buildings is the new hexagonal multifunctional hall. It is integrated into the existing structures and together with the old buildings forms the new main entrance and forecourt. New additions include the blue Munch hall with its more intimate atmosphere and the Marie Curie event hall in radiant red floating above the entrance hall with a view of the foyer and the park. Built in close proximity to the Erasme Auditorium the Strasbourg Philharmonic orchestra received a new oak-clad rehearsal hall. The Palais de la Musique et des Congrès now comprises a huge multifunctional hall, three auditoriums, two conference halls, fifteen conference rooms, foyers, bars, a restaurant, office spaces and a parking garage.

With a gross floor area of 44,500 m², the Palais de la Musique et des Congrès is an important part of the Wacken-Europe urban development project. The district located in the north of the city center close to the European Parliament receives a new architectural landmark and positions itself as an attractive international business and service destination.

In June 2011, Dietrich | Untertrifaller Architekten along with French architectural firm Rey-Lucquet & Associés won the international competition organized by the city of Strasbourg by unanimous jury decision. Starting in late 2012 construction works were carried out during ongoing operations and completed in the summer of 2016. 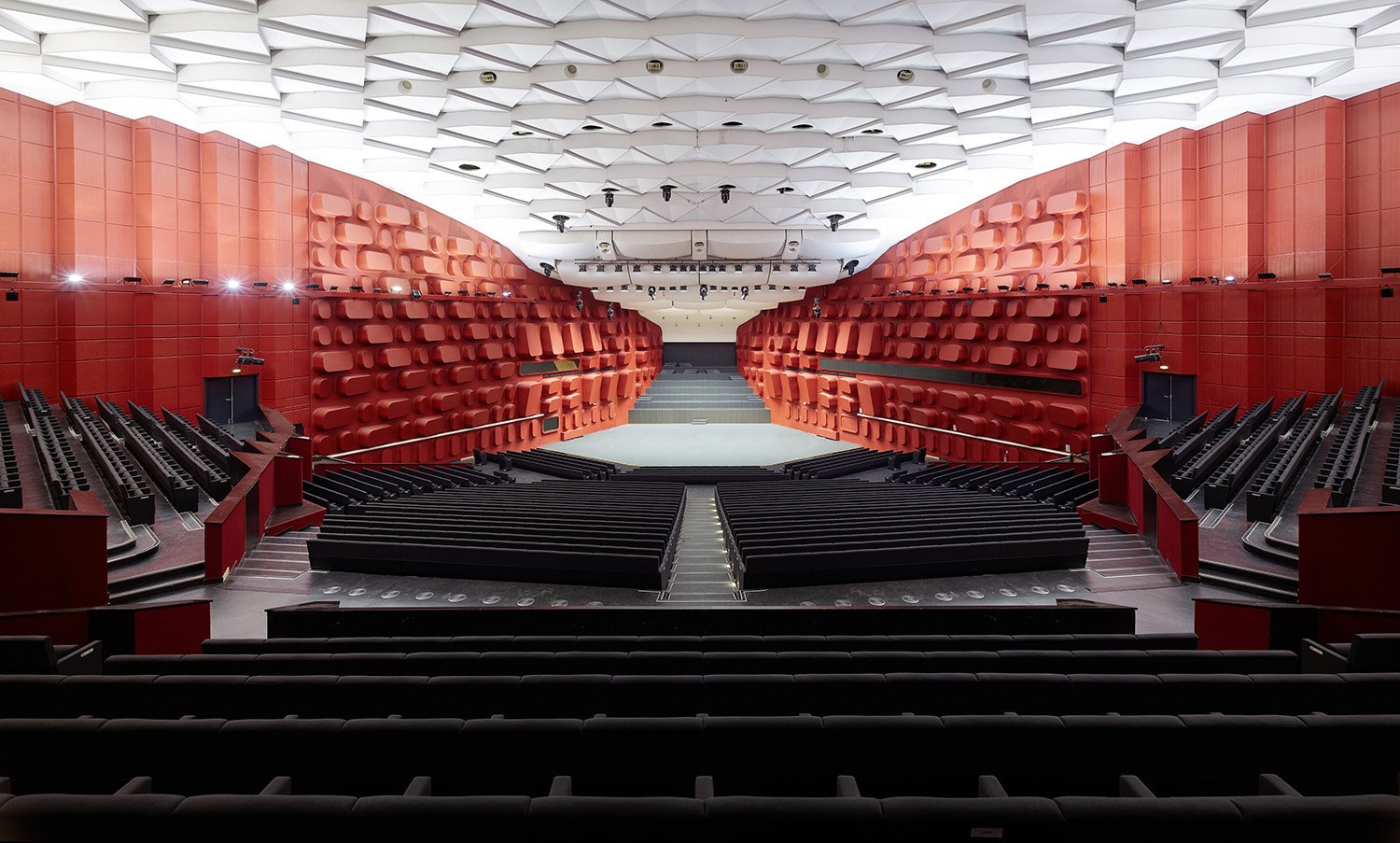 Dietrich | Untertrifaller have always regarded the integration of complex existing buildings as an exciting challenge which they take on with enormous passion. With the renewal and expansion of the Festspielhaus in Bregenz into a multi-purpose concert, event and convention center and the expansion of the Wiener Stadthalle, the architectural firm had already worked with event venues rich in tradition, giving them new relevance and radiance. The Convention Centre in Strasbourg marks Dietrich | Untertrifaller’s sixth project in France, after school buildings in Brittany, sports centers in Burgundy and Lyon, and the National Art College of Nancy.