The senatorial palace of the Bargellini family, built in the years leading up to 1658 and designed by Bartolomeo Provaglia, is the largest specimen of 17th-century architecture in Bologna. Inherited by the Davia family, today it contains paintings and objects of the Galleria dell’Opera Pia Davia Bargellini and the Museo Civico d’Arte Industriale.
Since its founding in 1981 the company Nomisma, operating on a national and European scale in the fields of economic and social research, has had its offices on the piano nobile of the building. The recent restoration of that floor, done by the architect Scannavini, brought the original “Salone delle Feste” (ballroom) to light, containing the original cycle of five paintings made in the first half of the 1700s by painters from the school of Pasinelli.
The interior design has been conceived through a path of listening, dialogue and participation with the 30-plus researchers who will use the spaces, bringing out the critical points and the desires of them all in relation to their place of work. This interactive approach allowed the researchers to make corrections to the project, rather than completely relying on the pre-set idea supplied by the architect: an attitude that collectively increased knowledge of the limitations and virtues of the space, while boosting a sense of belonging based on the idea that designing is already a way of inhabiting. The open-source project path was organized in three work phases: the initial analytical phase involved direct observation of the site and interviews with the people involved; the second phase, focusing on design, transported all the gathered information into a graph composed of circles and lines, through which each researcher could design his or her own working atmosphere; in the third phase, when all the graphs had been collected, a synthesis was developed, to which each person, for a period of ten days, could add further critical and design contributions. This process is the red thread that links together the architectural choices, which have become visible.
The furnishings are inserted in the rooms of the piano nobile through a contemporary but rigorous language: all the furnishing elements and certain components have been custom made by craftsmen, using materials like chestnut wood stained in dark tones for the furniture and brass for the lamps, while the fabrics were selected through historical research on 17th-century textiles contained in the Gandini Collection.
The flexibility of the Salone delle Feste, which will host conferences, meetings and assemblies of the board of directors, but also event and exhibitions on days when the facility is open to the public, has been achieved not through superstructures designed to contain the furnishings not being utilized, but through the design of the furnishings themselves: the seats and tables make it possible to create all the required configurations, without ever having to move them into other spaces. 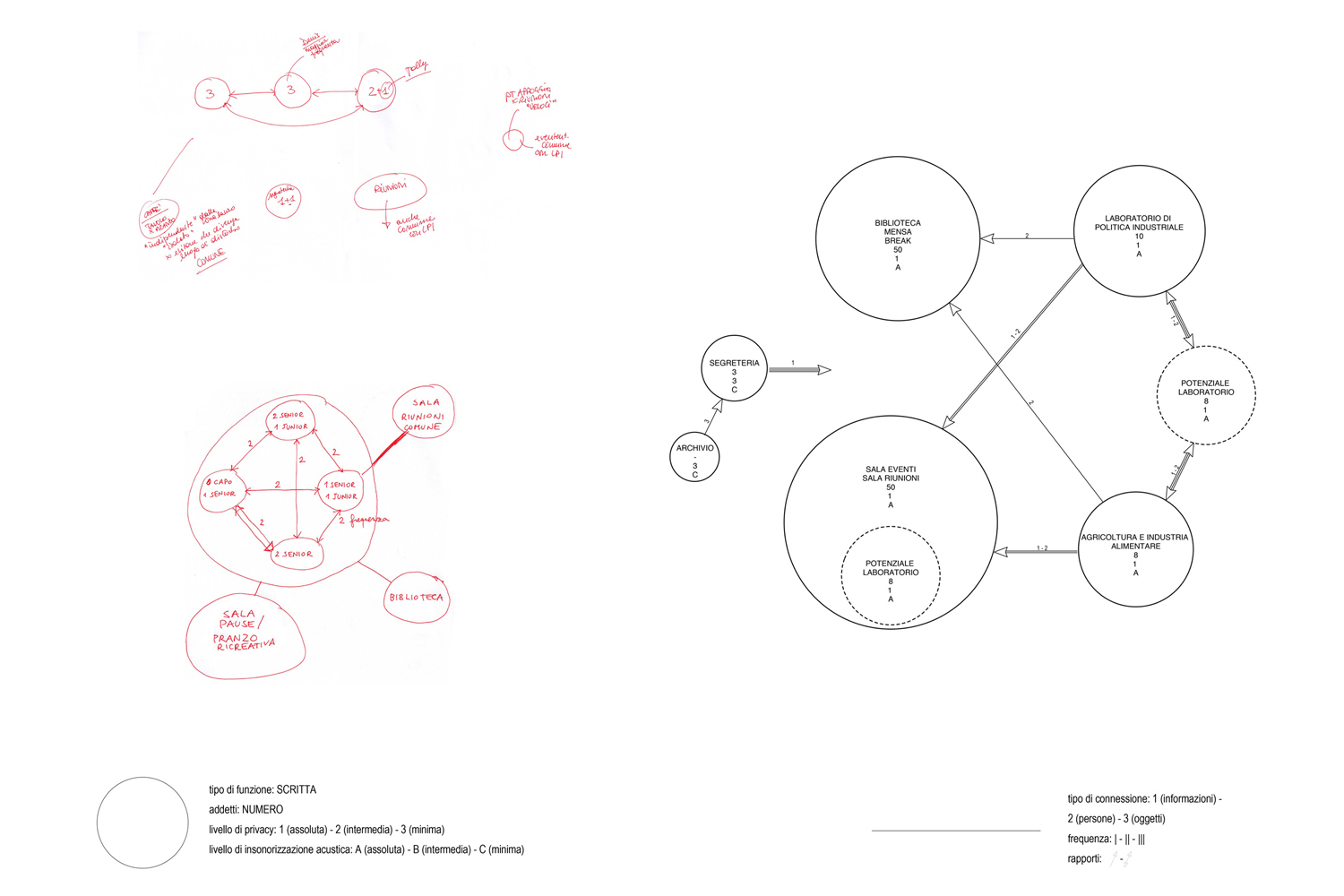 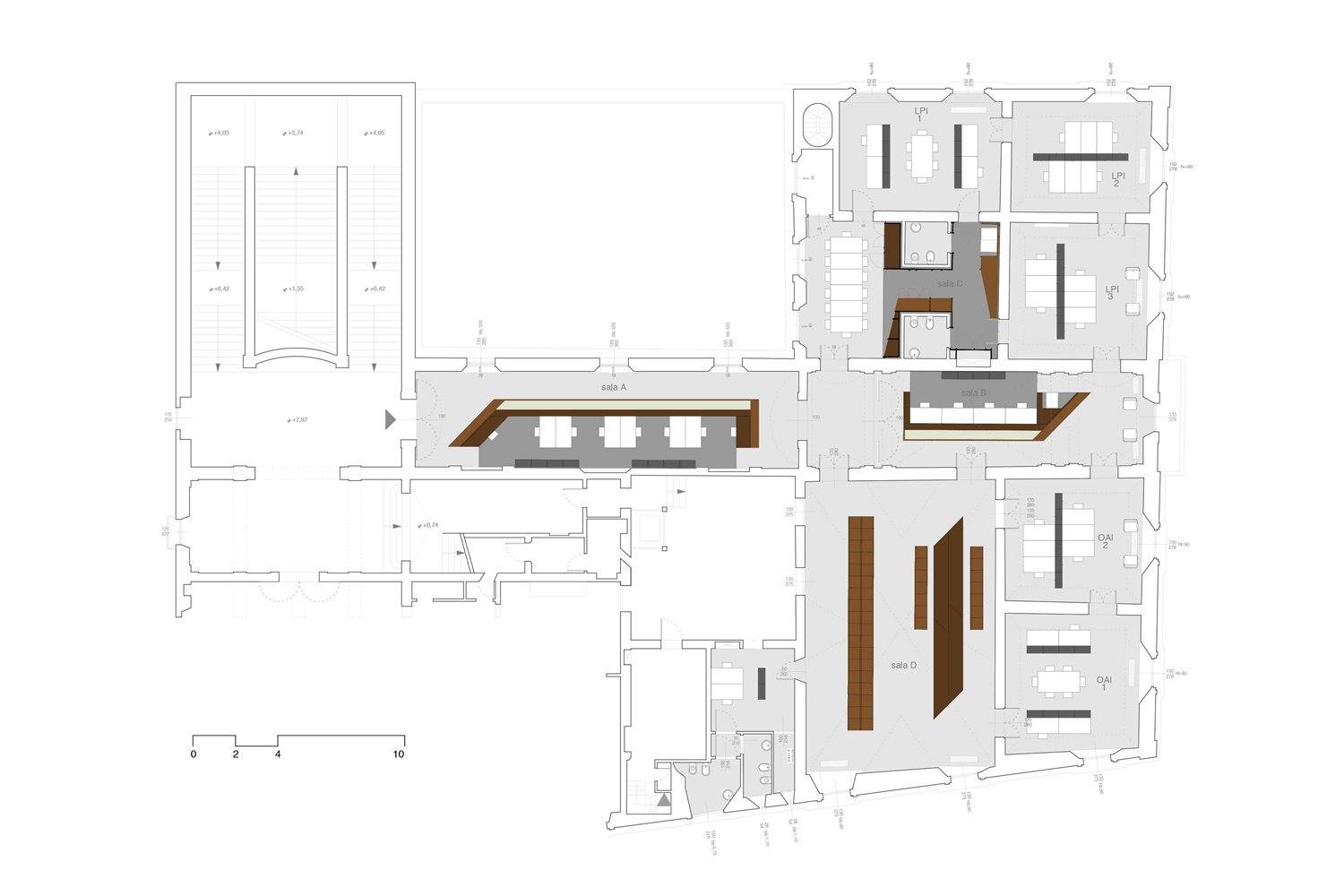 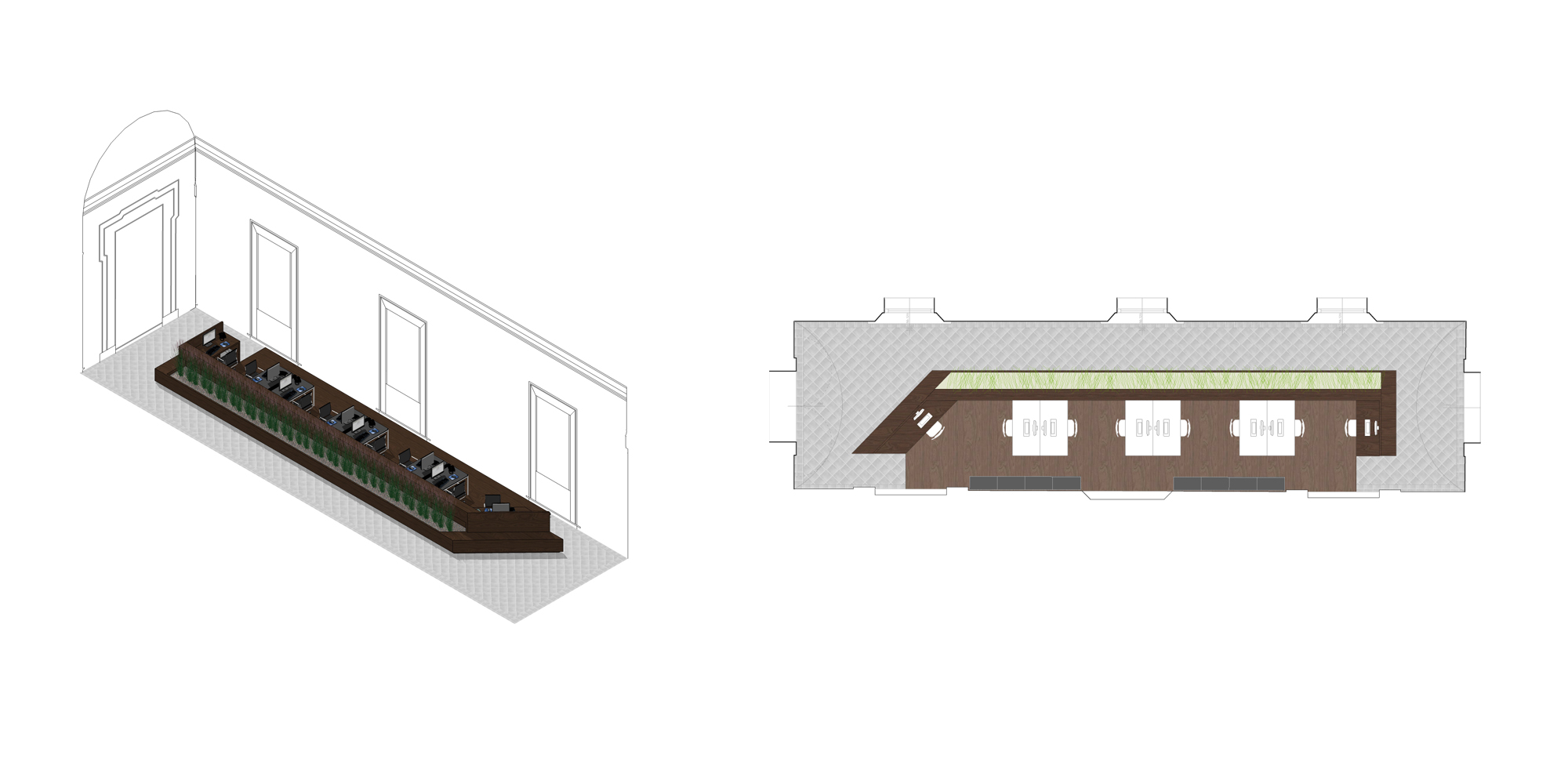 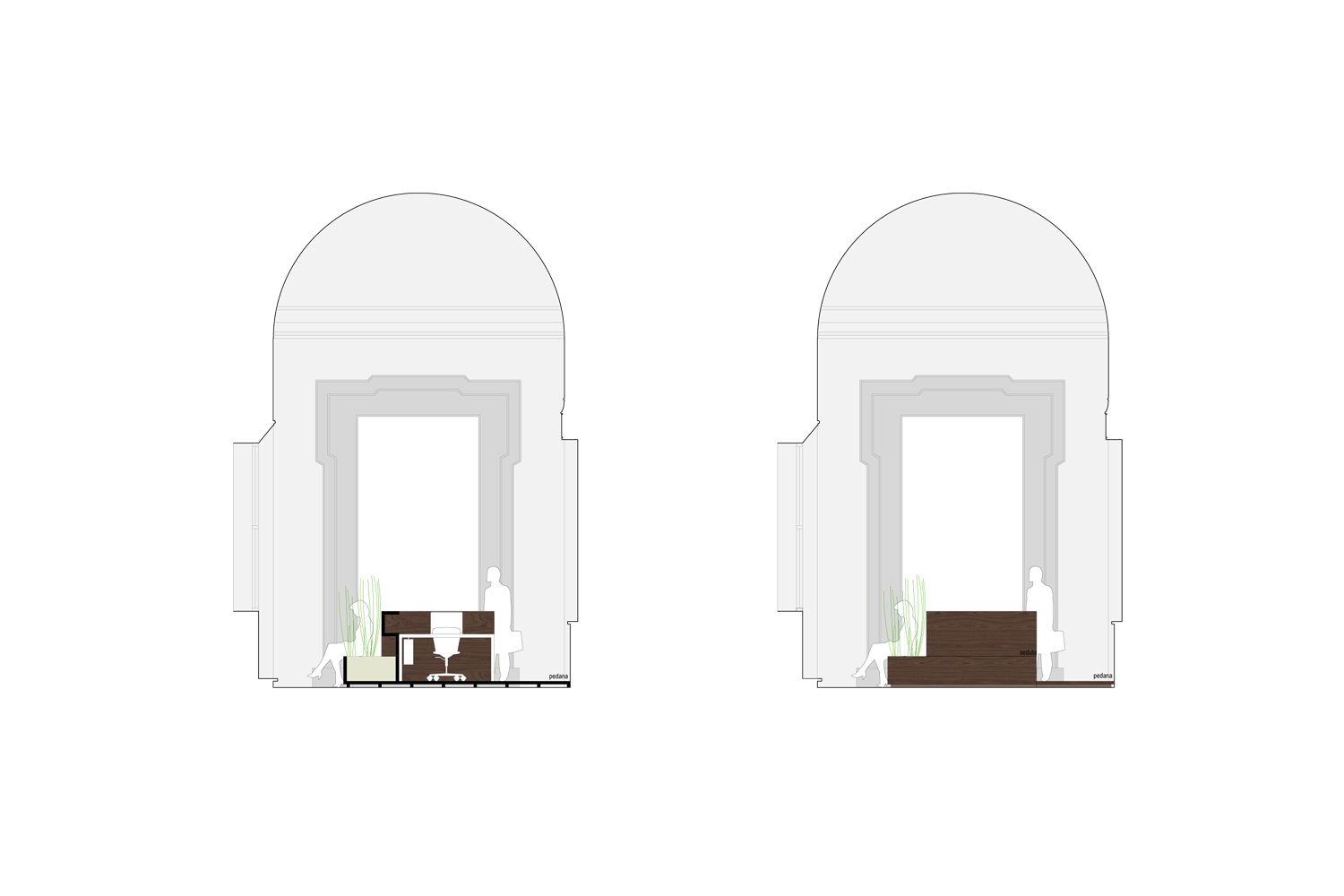 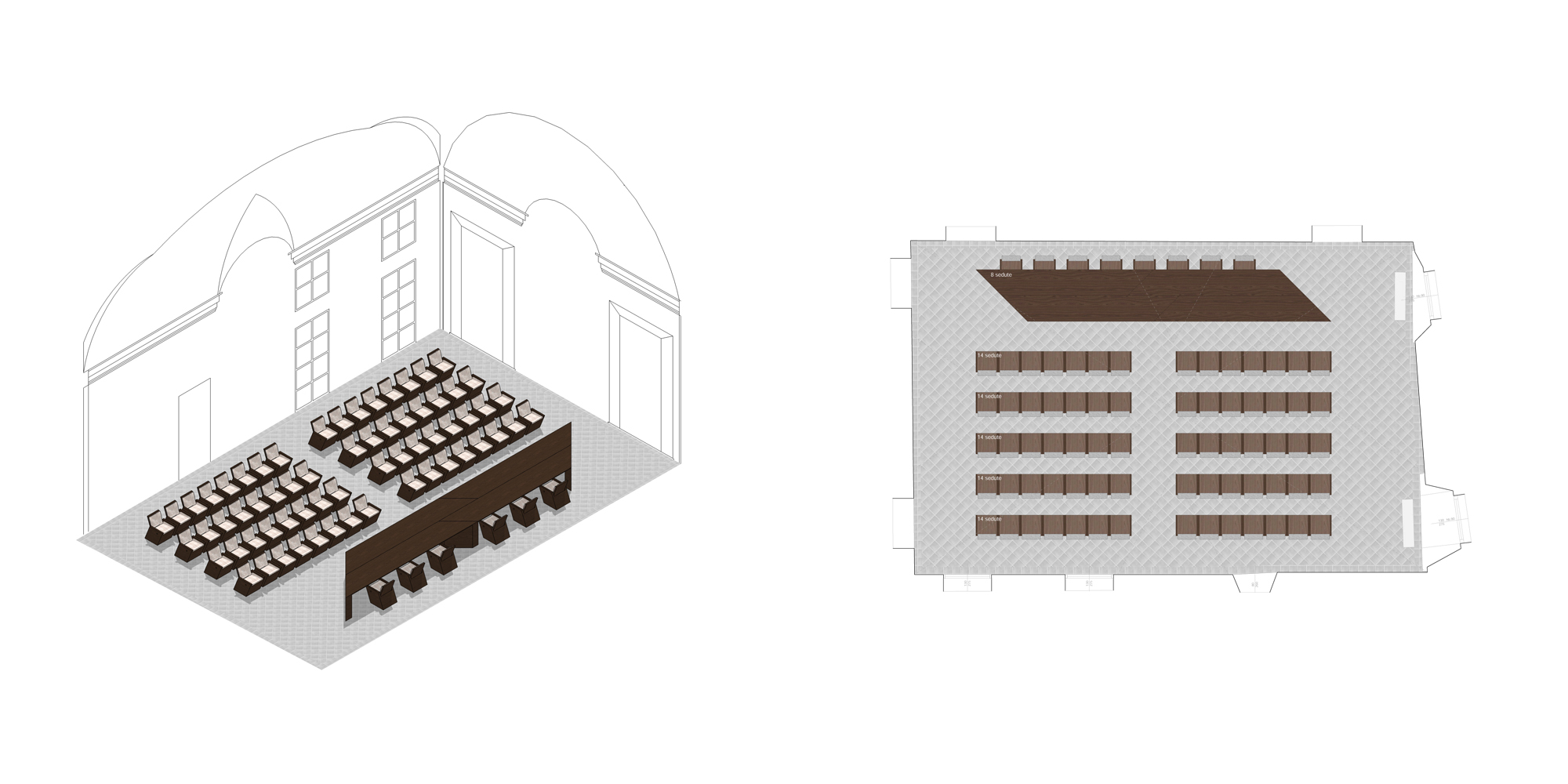