A Museum at the Heart of the Community

The preparatory committee first found a space in the village for the preparatory office of the museum. The former dwelling was converted into several small exhibition areas, where a permanent museum architecture exhibition was set up. It also hosted small art exhibitions from time to time, inviting artists to show works in vacant lots of the village, so as to connect art with the lives of residents. When an exhibition opened, it became an event in the village. Over the course of a few years, through interaction with residents, the museum preparatory office shared precious moments with the local people. With the appearance of art in the alleys, the spaces in the village also underwent a transformation. To match the artworks in vacant lots nearby, some residents began to display the wares they collected in their gardens, orchards or on their doorstep. With artistic alleys and a homegrown museum, this village started developing its local aesthetic of life.

The Design and Execution of the Yu-Hsiu Museum of Art

Almost a thousand drawings, more than 1500 days of discussing and amending the design concept, and communicating back and forth between the drawing board and the construction site. It gives you a profound sense that architecture can only be realized through practical trials.

The design of the Yu-Hsiu Museum of Art seeks to maintain the balance and discover the relationship between nature and the man-made in the original site. Applying the “blocking, leading and revealing” principle of Chinese garden design, it combines the man-made corridor with natural vegetation. The light and shadows created by the play of sunlight in the architectural space lengthen the “intermediary space” that visitors going inside pass through, and extend it to the main hall. The main hall is designed as a “box-within-a-box” – the outer layer resembles a Chinese scroll, a continuous path that goes around the building, while the inside is a more enclosed black box to create a strong dialogue between artificial light and the works on display. At the same time, the contrast between the inner/outer spatial flow results in the effect of inhalation and exhalation. The double-skin façade creates a cavity of airflow, making it warm in winter and cool in summer.

The first and second floors of the main hall use glass panels and grey bricks alternately, reducing the oppression of its height and harmonizing with the adjacent restaurant and residential area. The transparent and reflexive glass mirrors the changing sky, and helps to blur the boundary between the building and the skyline. The folly on the rooftop is like a living sculpture that floats on the roof, which is an extension of the second ground plane. It has an opening facing the Jiujiu Peaks in the northeast, suggesting a dialogue and the dialectics between nature (Jiujiu Peaks, God’s sculpture) and man (artificial sculpture). There is an ongoing dialogue between the main hall, restaurant, entrance corridor and the natural scenery on the site. The restaurant incorporates the idea of a large overhang and is enclosed by glass to eliminate the boundaries between the interior and exterior. The seemingly random and rhythmic arrangement of the three architectural bodies echoes the natural and organic character of Pinglin Village. 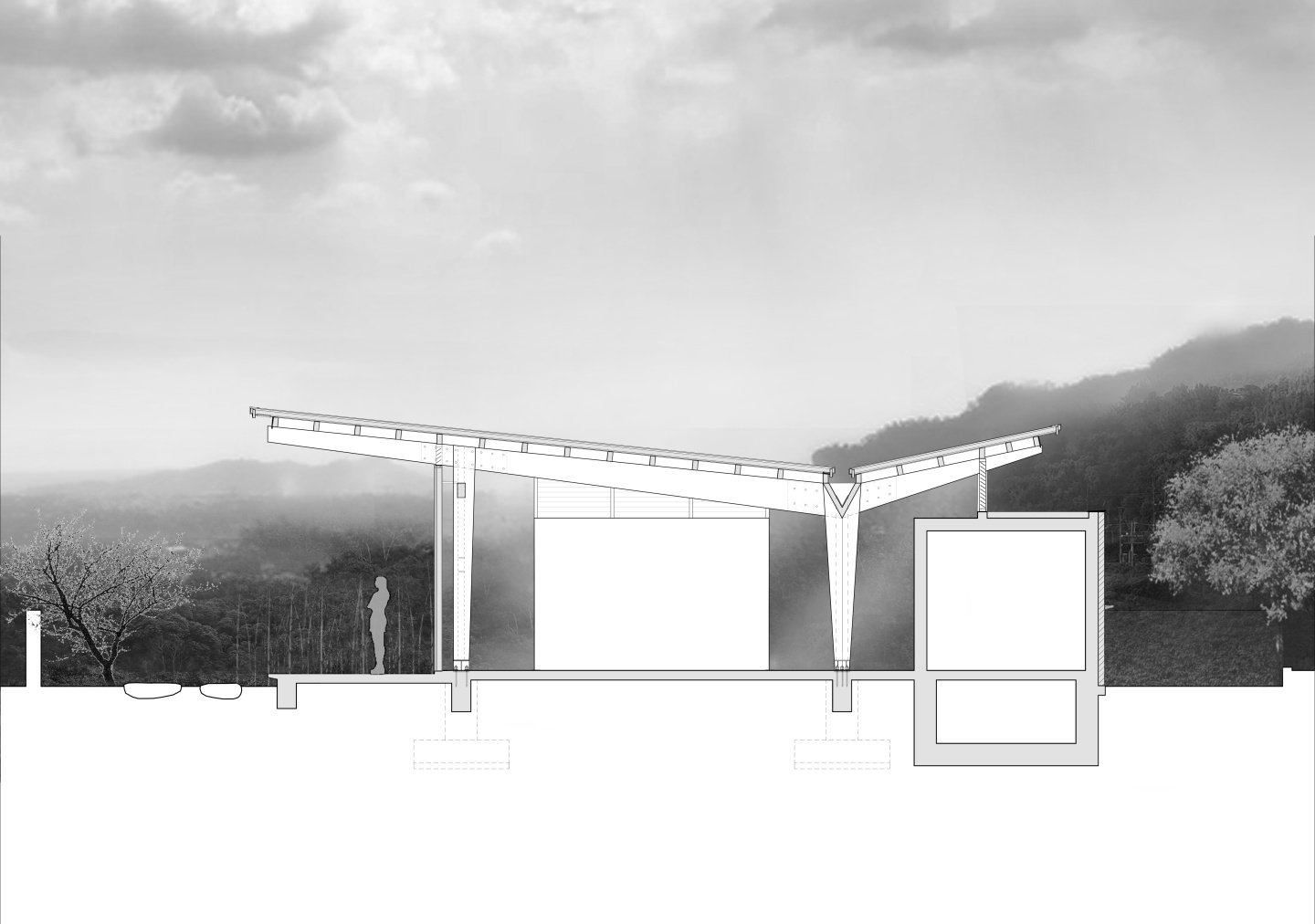 Wei-Li Liao, born in Town Tung-Hsiao, Taiwan. He graduated form SCI-Arc in 1999, taught by Coy Howard, Eric Owen Moss; and established AMBi Studio in Taichung, 2001. Through trying to apply landscape and humanism in the middle west of Taiwan for site plus background, he practices, thinks and self-examines architecture for this island, which owned a changing politic, culture and history, as well as the various ecology, landscape, and heterogeneous citizen power with observation and challenge. His project presented a fierce energy of multi-diversity in Taiwanese architecture and the integration between environment and people.