Located at First Street, HOME forms the cultural heart of one of the largest areas of development in Manchester city centre – a flagship building that acts as a catalyst for the surrounding area. As the base for the new organisation formed by the merger of Cornerhouse and The Library Theatre Company, HOME has been designed to allow for the commissioning, production and presentation of critically engaged and technically complex artistic projects, as well as the hosting of large scale cultural events. Its striking exterior acts like beacon, while the welcoming public spaces and social areas within are designed to be inviting to all. HOME is like a second home, a cultural home: a place for making, meeting and socialising, alongside enjoying the best in international contemporary visual art, theatre and film.

Connecting the First Street zone with the city centre, the building is located on a triangular site in between the railway arches and a new public square. Its characteristic, triangular shape and rounded corners create a strong visual identity. The glazed facade adorned with irregularly spaced fins opens up where public areas are located, giving the building a varied and dynamic appearance. Depending on the weather, the colour of its iridescent facade changes from black to blue to green. A terrace is located beneath the large overhang, connecting the café bar to the public square that can be used for outdoor cultural events. Inside, the triangular floorplan results in a number of unique rooms inhabited within the three corners, including the gallery, the restaurant, and one of the five cinemas which features a curved screen.

The interior concept and layout is that of an urban living room, instilling a sense of warmth and intimacy. The rugged concrete floors and walls contrast beautifully with the warm oak of the bars. The use of raw honest materials like wood, concrete, steel and glass underline HOME’s identity and mission to provide cutting-edge arts and culture.

The wide central stairwell at the heart of HOME acts as an informal social space, connecting the different uses of the venue: theatre, cinema and gallery. It encourages visitors to use the stairs instead of the lifts as the main circulation route through the building. The bars on each floor and the restaurant are located in the areas in between, cleverly integrated into the characteristic stairwell. The restaurant on the first floor is an essential part of the integrated art and culture concept, where visitors can enjoy a pre-theatre meal or a glass of wine after work. By offering food and drinks at a number of locations, the different parts of the building can easily be used independently for events.

The main theatre on the ground floor contains 500 colourful seats across three levels. It is designed in a way that spectators are never more than 15 metres from the stage. The adjacent foyer serves as a multifunctional space that can also be used outside of theatre hours. The smaller 150-seat flexible studio theatre space is located on the first floor. The second floor houses the five top-of-the-range cinemas in a range of sizes allowing great flexibility in programming. The four metre-high flexible gallery space on the ground floor is designed to accommodate the most ambitious of contemporary visual art installations. Outstanding sound insulation prevents the railway noise from disturbing the operating theatres and cinemas and allows them to be used simultaneously. 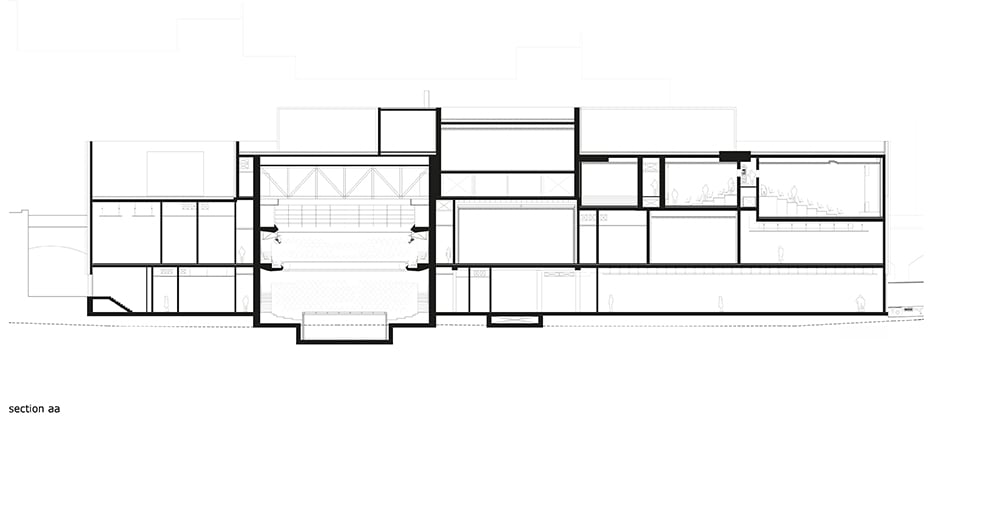 Mecanoo architecten, founded in 1984 in Delft, The Netherlands, focusses on process, consultation, context, urban scale and integrated sustainable design strategies to create culturally significant buildings with a human touch. Over thirty years, Mecanoo has become an internationally renowned architecture practice that continues to thrive, developing projects that seek identity in a globalised world.

Francine Houben is the creative director of a team that has grown to include over one hundred and sixty people with Aart Fransen as technical director, Peter Haasbroek as executive director and partners Francesco Veenstra, Dick van Gameren, Paul Ketelaars, and Ellen van der Wal. Houben sees the office as a symphony orchestra, bringing together urbanism, landscape, architecture, restoration and interior design in a coherent way, with a unique sensitivity for light and beauty. The Architects’ Journal named Francine Houben as the 2014 Woman Architect of the Year.