From a timber villa in the himalayan forests to a reworking of the Colosseum for a Bangalore brewpub, to round off on a resort nestled in the Rajasthan dunes History, culture and religion: Indian architecture has, for centuries, been the product of a precise amalgamation between construction traditions consolidated over the last millennium and external cultural interaction. Very little had changed until 1991, when economic reforms strengthened urban architecture in India. This happened gradually as its dialogue with the world economy became ever more well-structured and prominent. The vastu shastra tradition, whose models for temples are based on directional alignments, still remains influential in the Indian architecture of today ‒ hardly surprising since it is possibly the world's oldest holistic architecture. However, things are changing quickly, due also in part to the climatic change underway ‒ a factor making it ever more challenging to live in areas bordering the desert.

Will we still find, in a few years' time, the magnificent millennium-old temples that dot the entire country? Will there still be traditional straw-and-clay villages? Perhaps yes, but it still makes sense (and is also fascinating) to talk of evolution, given that this also means including customary Indian architectural features in efficient and sustainable edifices with a modern slant.

This is why we are reporting on three projects that highlight how much India is changing while also preserving its traditional identity. We have chosen a timber villa in the Himalayan forests by Studio Lotus, a reworking of the Colosseum for the largest brewpub in Asia, Byg Brewski in Bangalore, designed by Soumitro Ghosh's architecture office, rounding off on a resort nestling in the dunes of Rajasthan, by Sanjay Puri Architects.

If you are curious to explore a different view of Indian architecture, we recommend the book The Master in India by Balkrishna Doshi and Bruno Melotto (publisher: Maggioli Editore). This critical journey analyses Le Corbusier's and Louis Kahn's approaches with local traditions, and comes complete with a recent and unpublished interview with Doshi himself ‒ an interesting insight into the principles that have always underpinned his architecture. Villa in the Woods: how to live in Himalayan forest

Villa in the Woods is the name of this new timber edifice in the Kumaon district, between Bhimtal and Mukteshwar, in the Indian state of Uttarakhand, and designed by Studio Lotus.
Villa in the Woods is part of a masterplan designed to foster a self-sufficient community living amidst 90 acres of Himalayan forest. With direct access from the capital New Delhi, it stands at an altitude of 6,700 feet. The project was mentioned by The Plan Award (the annual international prize recognising excellence in architecture, interior design and urban planning) as one of the best entries in the 2021 House section. >>> Find out more and sign up for THE PLAN AWARD 2022 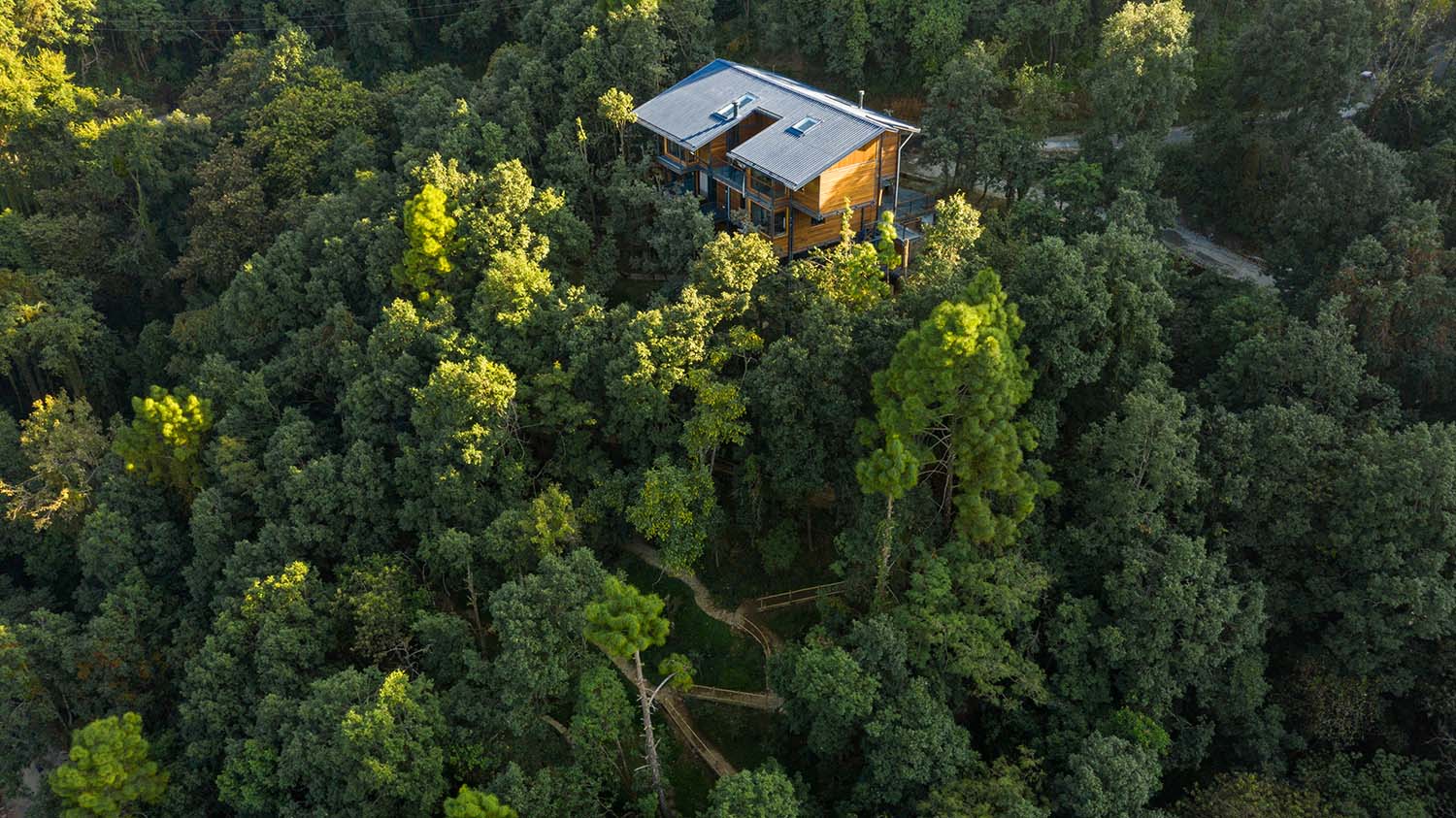 The design scheme factors in detailed analysis of the existing terrain, slopes, vegetation, surface drainage patterns and soil types. These studies were carried out to identify strategies for watershed and storm-water management, and potential areas for development to minimise cut-and-fill and avoid disturbing the site's ecology. With construction in the Indian hills swiftly rising and damaging the sensitive terrain, the architects adhered to an eco-conscious sensibility. The technology adopted is an interesting choice: a pre-engineered structure including light gauge steel framing (LGSF) clad with locally sourced materials. The architects leveraged a custom-designed modular system that uses light-weight mild steel sections and a six-layered drywall section, allowing the three-storey structure to be assembled on site from a kit of numbered pre-engineered parts.

>>> Continue reading the article and browse the full gallery

Byg Brewski: the largest brewpub in Asia is inspired by the Colosseum The idea of creating Asia's largest pub for Byg Brewski Brewing Co. to the blueprint of the Colosseum came from the architect Soumitro Ghosh. This design too took part in The Plan Award in the Hospitality section.

The project vision was influenced by the entrepreneur himself, who was previously proprietor of a pub, has directed three successful films, and began a micro-brewery business a few years ago. An intoxicating blend of enterprise and visual understanding to the backdrop of the blessed climate of Bengaluru: this is what makes Byg Brewski an ideal venue for pleasant evenings and stunning sunsets. The central area has been designed as an arena for major events (such as the FIFA 2018 final with 3600 guests), it is an entirely open space and beats as the heart to the entire complex: even the kitchen can be walked through and is part of the 'performance' Ananta by Sanjay Puri Architects: a resort concealed among the dunes of an Indian desert

Its lines are shaped by the sand dunes of the Jaisalmer desert in Rajasthan, India: this resort (self-sufficient in energy terms) was designed by Sanjay Puri Architects and won the Hospitality section of The Plan Award 2021. 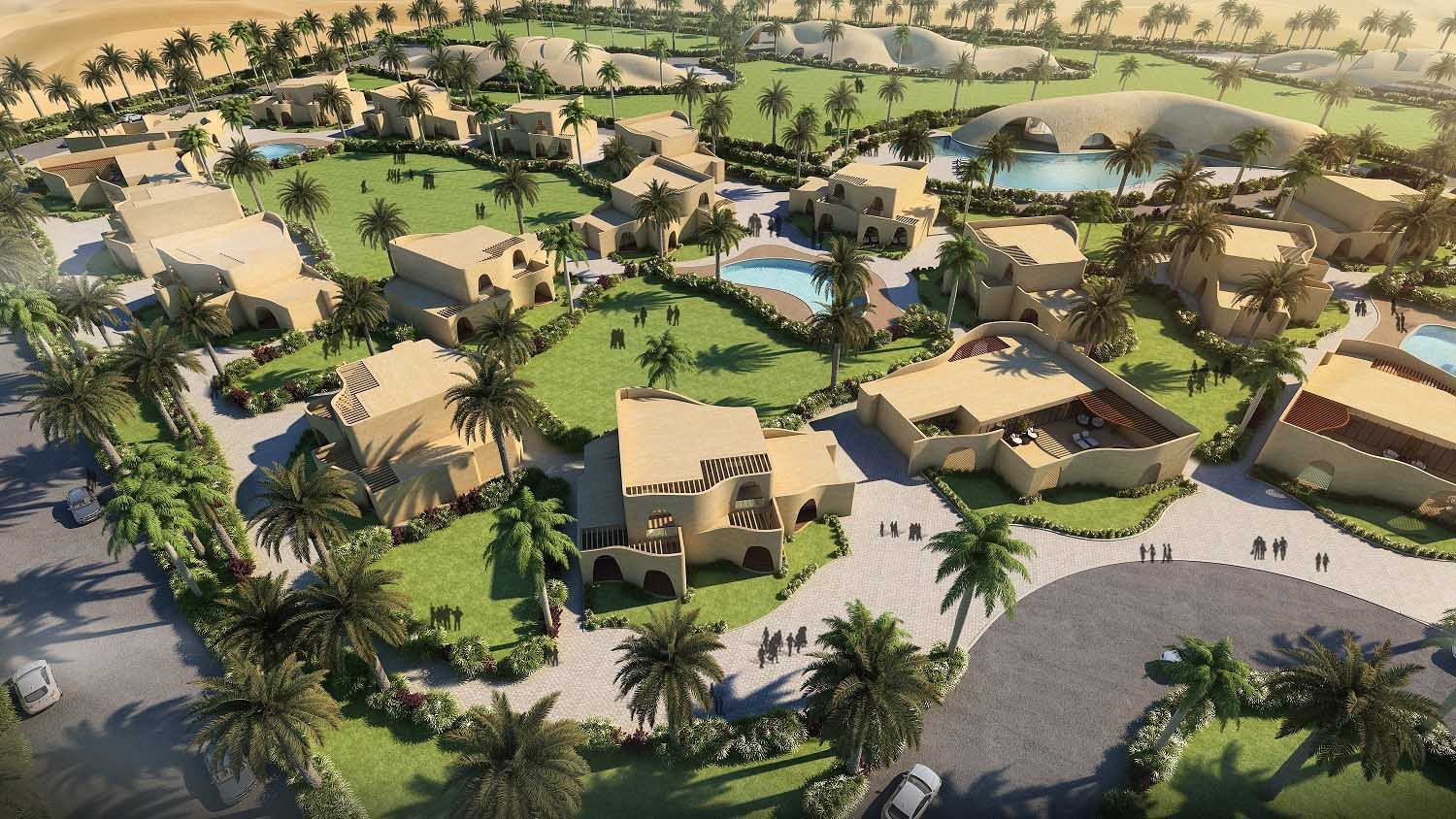 All the buildings have been conceived in such a way as to have open connecting spaces between them ‒ spaces that are effective shelters providing shade to temper the impact of the desert heat. And so the design components interact smoothly as a single body, a combination of low buildings interspersed with green areas. All of this is paired with other characteristics (the use of solar power, rainwater collection, water recycling and waste management) that make the project sustainable, inexpensive and extremely efficient in terms of energy. >>> More inspiration from the East: five magical ‒ and still secret ‒ places for relaxing with nature, from the Czech Republic to green Mongolia