Where wine is made: vineyards on a venetian island and in the italian alps

A visit to vineyards, places as sacred as a church but as busy as a factory My last visit to Venice began in the same place as always: Piazzale Roma. This time, though, I wasn’t headed for the Biennale. At the Fondamente Nove pier was a vaporetto waiting to take me to one of the few still largely unspoiled islands in the Venetian lagoon, Mazzorbo. This is the location of one of the most prestigious wineries in the world, surrounded by medieval walls and with a 14th-century bell tower on the property. But I also visited Cantina Bolzano, which earned CasaClimaWine certification after the work of architects Dell’Agnolo and Kelderer, and California, to a winery where production is one hundred percent sustainable.

I had no idea that quality wine was made on a Venetian island and less than no idea that you could visit the winery. In Venissa, an estate on Mazzorbo, an island strip of land that’s home to just under 300 people, they told me that there was even a vineyard in Piazza San Marco until 1100. The earliest evidence of Venetian viticulture dates back over 2500 years, with the lagoon’s islands always having been farmed to provide some degree of self-sufficiency in a lagoon where 92 percent is water, and even squares were once used for growing crops. This explains, by the way, why so many squares in Venice are called campi (fields). Venissa was established in 2002. Gianluca Bisol spotted a small vineyard in front of the Santa Maria Assunta Basilica, the oldest church in Venice, and was intrigued. He went to speak to the owner, Nicoletta Emmer, and began doing historical and agronomic research into the vines. This is when he discovered the great winemaking tradition of the Venetian islands, which were home to many vineyards until 1966, the year of a major flood that destroyed the vineyards and most traces of this millennial tradition. However, his agronomic research brought to light a native vine, Dorona di Venezia, which over the centuries has adapted to the salinity typical of the lagoon.

Since then, the vineyard has been developed to offer accommodation, with the facility the result of the painstaking renovation of an ancient building that’s now entirely dedicated to guests. The fact that Venissa is a vineyard, a clos surrounded by medieval walls and with a 14th-century bell tower within the vineyard itself, makes this winery unique and more than worth a visit. The history of this winery near the Alps began with the establishment of two separate cooperative wineries in 1908 and 1930. It continues today, with the recent construction of new business headquarters. With this project, the architects have successfully conveyed the continuity and growth of the winemaker, and, in particular, its continuing knowledge of winemaking. The Cantina Bolzano building is in the small town of San Maurizio, on Bolzano’s urban outskirts. It’s a significant construction in that it embodies symbolic values and meanings, communicating the image and reality of important local resources, the cultivation of vineyards, and the production of wine of recognized quality. The project is the culmination of a history that began with the establishment of the two cooperatives, continued with their merger in 2001, and led to the announcement of an international competition for a new headquarters that could convey the history and values of the winemaker.

The architecture created by competition winner Dell’Agnolo and Kelderer is a coming together of expressive values and the host of technologies demanded by the cellar as a place for production, marketing, and tasting. And the project was key to Cantina Bolzano obtaining CasaClimaWine certification. Built with sustainability in mind, the building is thoroughly insulated and able to maintain the optimal temperature in the production areas. This is achieved by using methods that don’t involve energy expenditure that would affect the interior climate (such as protection from solar radiation, ventilation stacks) and the use of a vertical – in part “free fall” – production system that doesn’t use pumps.

>>> See the project and the gallery on The Plan

The best term to describe this luxury “barn” is agricultural design. It’s obvious right from the entrance door, a perforated weathering steel panel that suggests the care architect Clayton Korte has devoted to every detail. Located in the Templeton Gap area of West Paso Robles, California, the Saxon Winery, which started life as a simple agricultural storage structure, stands at the foot of the fifty-acre James Berry Vineyard and was designed as a modern pole barn. Before it was built, the site was an oil field, from which the drill stem pipe was reclaimed and now supports the photovoltaic roof system, which offsets more than 100% of the winery’s power demands.

Minimalistic materials were selected for the project for their ability to withstand the particularly dry Californian climate, but also to minimize the need for maintenance. The primary column and roof structure are made from exposed welded drill stem pipes, while the laminated glass solar modules, which act as both the solar system and roof, are supported on WT wood and steel purlins welded to the pipe trusses. An eight-inch diameter Schedule 40 half-pipe gutter is located on the low end of the roof for future rainwater harvesting. 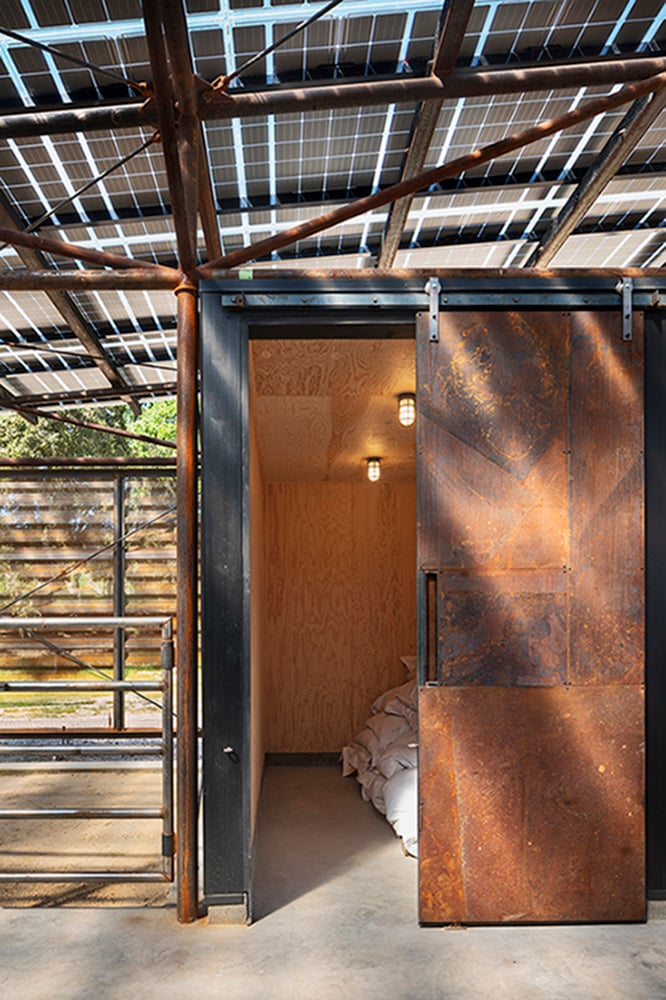 The Foundations reduce the amount of cast-in-place concrete needed by including permeable gravel paving for all open vehicle storage bays and livestock pens, thereby maximizing the amount of rainwater that is filtered back through the ground and into the watershed.

>>> This winery is a special project in the Award category of The Plan. Read more and browse the gallery 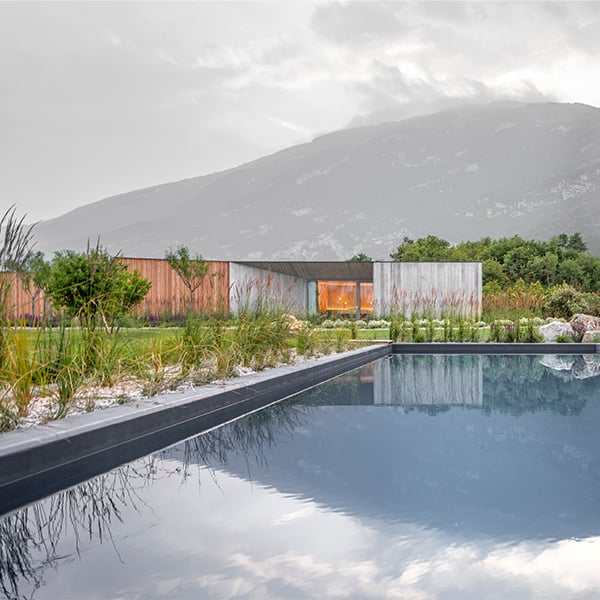 The sweet apple: expansion of a farmstay property

Raro Studio designs hospitality and residential additions to an agritourism property in Trentino....