By Francesco Pagliari - 1 November 2012
The Sottomarina district of Chioggia has plenty of history and tourist pretensions. It is home to the Oversea Building, a six-storey construction with a basement quite near the sea. This edifice, with 20 apartments and 30 garages spread across the ground and basement floors, stands in an area that was largely developed in the 20th century, with space having been made for this structure by tearing down a building. The design seeks not only to create a long-term eco-sustainable structure, using innovative technology, but also a very notable building. Much of the built fabric here is rather ordinary and somewhat rundown, but this volume is anything but that. It stands out, saying "new building, new image and new technology". It is about creating a truly comfortable and high quality edifice.
The parallelepiped shape rises deliberately, imposing itself on the surrounds. Initially, one is struck by the size, a perception that is reinforced by the uniformity of colour across three of the four elevations. As one continues to look at the building, one's eye is drawn to how the balconies, with opaque parapets, are repeated in a near continuous pattern all the way around the structure. These are large elements, almost terrace-like, and define the shape of the building through how they jut out and contrast to the actual wall of the building, which becomes a secondary, almost fleeting aspect dotted with windows. The rigidity of this pattern, with the consequent highlights and shadows, creates the rhythm, which is reinforced by the dividing walls - rising the full height of the building - that provide a sense of privacy and demarcate the edge of the apartments.
The horizontal and vertical pattern created by the solid balconies and dividing walls is broken on the southern elevation, where the photovoltaic panels are located and more rounded angles are used. The structure that is attached to the facade is both functional in that it provides electric power and decorative, bringing an intangible sense, hiding the framework of balconies and dividing walls and visually breaking up the uniformity.
Thus, the building has a dual image, from the north and the south. It juxtaposes the heavy image of the overhanging balconies with the more ethereal, technological and decorative side, although both are parts of the same architectonic idea of placing accents in the composition.
The entrance areas are both rigorous and abstract. The concrete floor has a quartz finish, the stairwell, made of reinforced concrete, is located in the centre and the walls are painted concrete. Together, these elements form the basis around which structures and defining architectural elements are added.
The use of technology to achieve eco-sustainability is equally significant and central to the design. The building has a geothermal installation and heat pump, solar panels on the roof, photovoltaic panels, underfloor heating and cooling, inbuilt dehumidifiers in all the apartments and automation devices to manage each individual unit.

Simone Micheli Architetto
In 1990, Micheli established the architecture studio of the same name and, in 2003, the design firm Simone Micheli Architectural Hero, with offices in Florence and Milan. Between 2003 and 2009, he lectured at the Florence Faculty of Architecture. Also in 2003, he began lecturing at Polidesign and the Scuola Politecnica di Design, both in Milan. His professional career has followed different paths: from architecture to interior design, and from design to visual design and communication. He has completed numerous projects for governments and major private clients in the residential and community sectors.

His work has been featured in numerous Italian and international magazines, television interviews, and monographs, the latest being Simone Micheli from the Future to the Past (2012).

VIA 57 West is a hybrid between the European perimeter block and a traditional Manhattan high-rise, combining the advantages of both: the compactness ...

The Grazie halls of residence are in the old heart of Udine, near the castle, right next to the famous old cloister and the Basilica of the Blessed Vi... 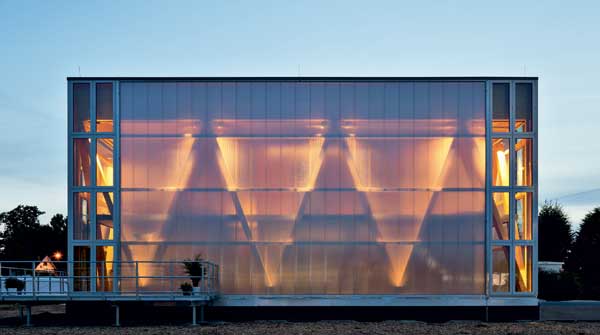 Cubity was developed by the Darmstadt University of Technology for Solar Decathlon 2014. It offers an innovative concept for student housing that comb...