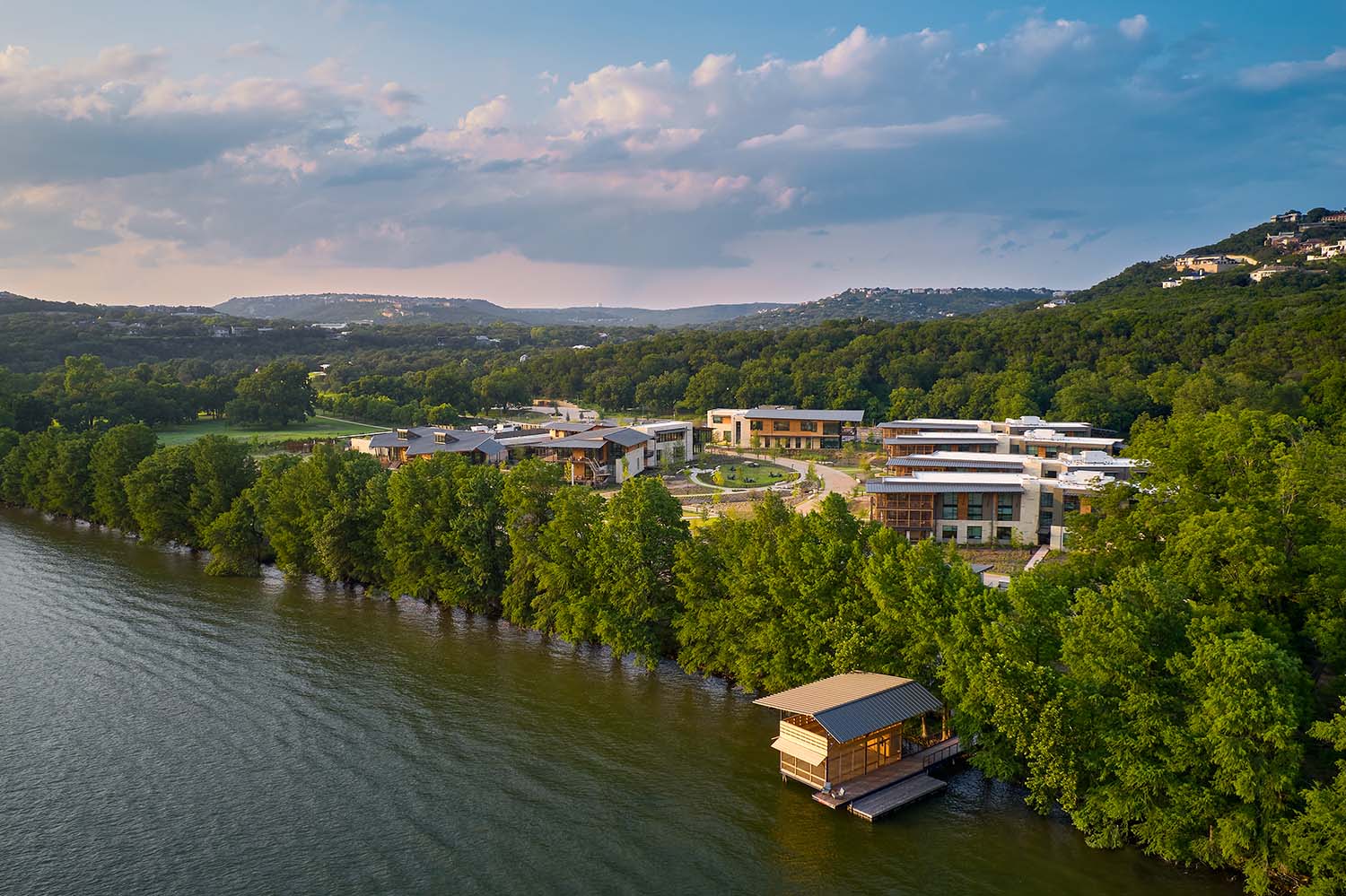 Working with local materials, appreciating their touch and structural potential, is one of the ways that architects can design buildings that are rooted in their particular place. In this case, the place is Texas. And the architects are Lake Flato, a local practice dedicated to creating architecture that represents a holistic experience of discovery, and responsible buildings that respect the environment. These values have been skillfully expressed in its projects for the Holdsworth Center in Austin and the San Antonio Federal Courthouse. Almost disappearing in the natural setting of its 44 acre site on the shores of Lake Austin, the Holdsworth Center was designed as a retreat for teachers. A scattering of modestly sized buildings that respect the lay of the surrounding land make up this complex, designed and built specifically to provide the state’s public-school educators with a facility to support their work with, and commitment to, their over 5.5 million students.

The importance of this architecture lies in its ability to promote interaction, build community, and encourage socialization among its resident teachers, as well as in the way it invites them to enter a deeper relationship with both nature and other people in the center’s day-to-day activities. The site itself was the starting point of this design philosophy, which was brought to life in the way its spaces and their dimensions have been organized. The campus includes fifteen buildings totaling 173,000 sq.ft. with 186 guestrooms, classrooms with state-of-the-art technology, a 300-seat lecture hall, an open-air amphitheater, and a two-story dock classroom on the lake.

In designing the Holdsworth Center, particular attention was given to leisure and recreation. The project therefore includes a gym, walking trails, recreation areas, and a central square.

The materials and colors chosen for the project were intended to create a structure that’s rooted in its place. Wood (both inside and out), glass, and stone give the Holdsworth Center a style and personality that mirror its setting. Nearly 84% of the site is dedicated to open spaces and resource conservation. Everything leads the eye towards the lake, simultaneously encouraging a feeling of physical and mental wellbeing, and a slower pace of life. Located on a site that reflects the history, and local architectural and artisan traditions of San Antonio, the city’s new courthouse is a mix of different design elements, aesthetics, functionalities, and old and new symbols that need to be preserved. Designed by Lake Flato in collaboration with Alta Architects (formerly Munoz & Company), the project replaced the Texan city’s old court, the John H Wood Jr. US Courthouse. The previous building was constructed during the second half of the 1960s as the United States pavilion for the 1968 World’s Fair, but was reconfigured as a courthouse two years later. Its location, just a stone’s throw from the historic center of San Antonio and San Fernando Cathedral, adds to the importance of this new building, which was designed from the outset in consultation with local authorities. Densely planted with native species, the site itself is a reference to its own agricultural history while also reinforcing its importance for its community.

And community focus was part of both planning and construction, with the construction phase in particular intended to provide work for local workers, professionals, and tradespeople, as well as make use of locally sourced materials. Terracotta, glass, metal, and rough-cut local Lueders limestone characterize the structure both inside and out, with glass and metal in particular dominating the façade on South Santa Rosa Avenue. The entrance here is punctuated by a layering of different metal structures, namely its columns, horizontal sunshading, and the roof, while the northern façade is chiefly stone and glass. The pilasters on the northern side are natural stone and alternate with set-back glass panels. Besides their structural role, the pilasters are a metaphor for the justice system. Broken into twelve bands punctuated by terracotta bricks, they represent the twelve members of a traditional US jury.

Arriving at the courthouse, visitors enter a long, bright atrium with views of the upper-level balconies. The space gradually widens, leading to a colorful mural by artist Thomas Glassford. Next to the mural are stairs up to the next floor, where a window overlooks San Pedro Creek, which can also be seen from below. The northern side of the building – that is, the one on your left as you cross the space between the entrance and the mural – reflects the rhythm of the façade, with the balconies punctuated by warm oak slats.

The courtrooms also have oak paneling and feature carved wooden gates inspired by the style of artist and craftsman Lynn Ford. Here and throughout the building, windows play a key role. Comprising multiple full-height openings, they’re designed to let in as much natural light as possible. Numerous skylights have also been used along the length and breadth of the building. Art, architecture, design, and science have all been brought together in this project, not only to support the local economy but also to create a sustainable facility with low environmental impact. Besides LEED Gold certification being an objective from the outset, brightness and comfort were two of the basic requirements for making the building’s work spaces as high quality as possible. The building services installed generate savings of over 20% on electricity and around 30% on water. Finally, the structure also offers two charging stations for electric vehicles to encourage their use.

“Courthouses remain that rare example of an iconic symbol for justice and integrity housed in a uniquely ordered architectural presence,” says David Lake, founding partner of Lake Flato. “In this courthouse, the design team tried to continue this tradition, creating strong pilasters and columns both inside and out. Between the pilasters are the courtrooms, which are wide open to light from outside. Daylight has no prejudices. It falls on all of us in the same way. It illuminates. The design team created a courthouse whose clarity of purpose and permanence are enhanced by the presence of light.”