A futuristic greenhouse recently opened its doors atop the headquarters of REO Veiling in Roeselare, a city in West Flanders. Dubbed Agrotopia and the largest of its kind in Europe, the greenhouse offers views across the skyline of the Belgian city through large faceted windows. Inagro and REO Veiling hired van Bergen Kolpa Architects and META architectuurbureau to design Agrotopia with sustainability and circular economies as two of its key principles. This is a research and innovation center for professional urban greenhouse horticulture. It’s even been described by the management of both companies as a driving force for the future of the sector. The interior of the center is divided into different areas for different research fields, as they develop and test new cultivation methods – for example, for hydroponically grown fruit and leafy vegetables. This makes it possible to grow foods with minimal environmental impact. The center’s core activities and organization are driven by the investments of the two businesses, which, for some time, have been focusing on research and innovation in the agronomic field.

Even before it opened officially, Agrotopia was certified by ENoLL, the European Network of Living Labs. This association has defined Living Labs as “User-centric, real-life innovation environments in which new solutions emerge through co-creation in research and innovation, with the involvement of different stakeholders.”

The same sustainable, innovative approach is also reflected in the architecture, designed and built specifically to integrate into the city’s circular economy strategy. Sitting atop an existing building, the greenhouse is reminiscent of a terrace that overlooks the city on all sides through its large windows. The distinguishing feature of Agrotopia is its glass and steel structure. It also has two highly recognizable façades with bay windows, with the remaining sides linear. While the latter have the advantage of letting in a great deal of sunlight, the former are fitted with solar shading. A visitor services center is accessed via a high external staircase at the front of the building.

“Agrotopia was a test case: constructing a greenhouse on top of an existing building has never been done before on this scale and it presented many challenges as well as opportunities,” said Niklaas Deboutte from META architectuurbureau. “Integrating the steel greenhouse with the concrete substructure and the complex installations has resulted in a true public building of exceptional architectural quality for the city of Roeselare.”

How Agrotopia integrates with the city’s circular economy 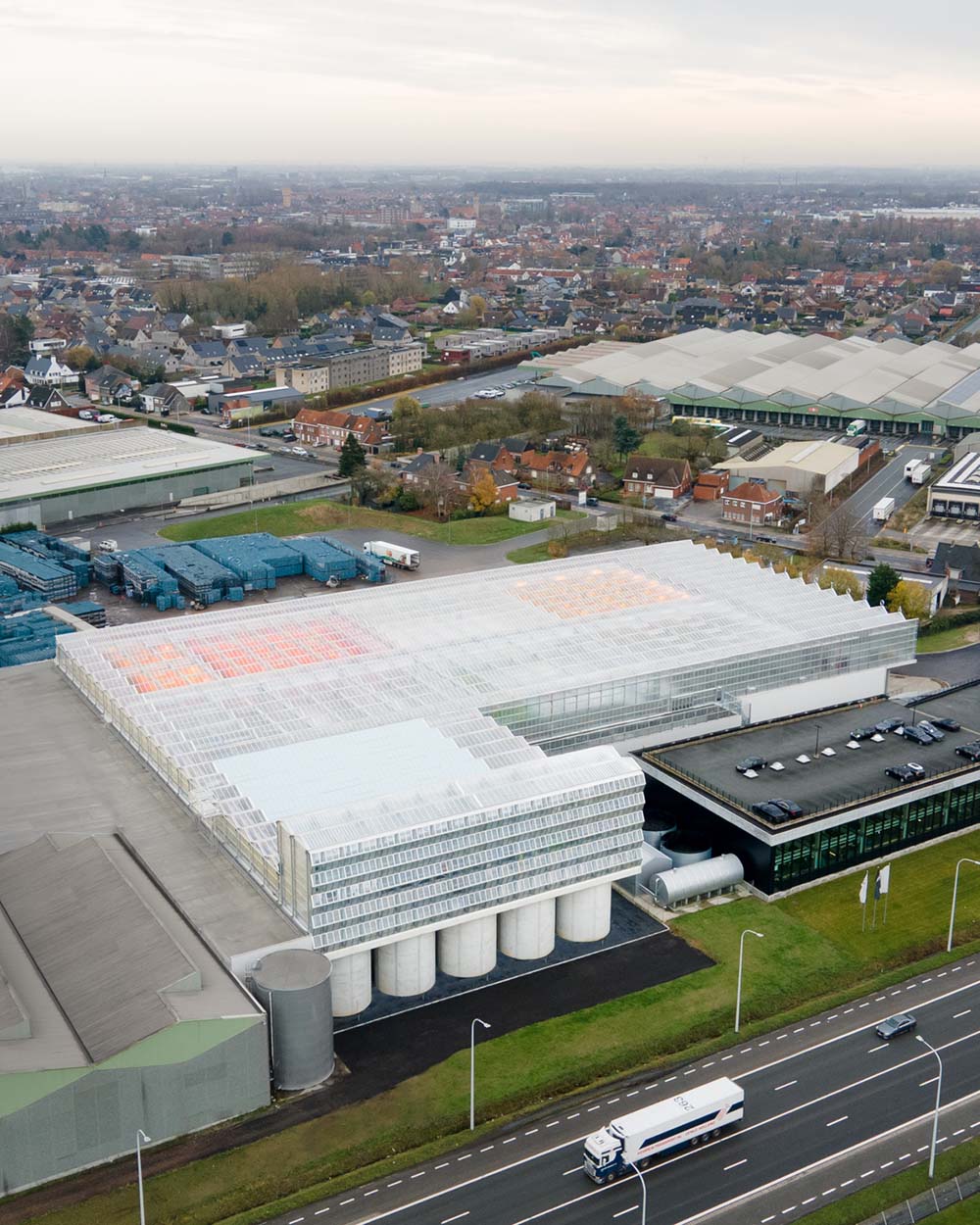 During both the design and construction phases, the importance of the center playing a role in the city’s circular economy was paramount. The building has therefore been equipped with an innovative system for recovering water as well as heat generated by the burning of municipal waste, specifically from the surplus heat generated by the MIROM incinerator. As for water, not a drop is wasted, with the crops irrigated using a rainwater recovery system, the water from which is later recycled and reused. Covering 102 thousand square feet (9500 m2), the interior of Agrotopia is organized into four different climate zones, each one providing the best environmental conditions for plant growth. The choice of a double-height greenhouse is also useful, making it possible to grow crops vertically in the most suitable environment possible. This in itself is a good indication of the high technological content of the building, with all that technology intended to support research into increasingly sustainable techniques with low environmental impact. The best example of this is that the heat, humidity, and light needed by the various crops are all regulated by computer. “It’s simultaneously an economical and sustainable use of a single space,” says Jago van Bergen of van Bergen Kolpa Architects.

The greenhouse is also intended to be a place for meeting and interaction between different players in the agri-food industry. This includes students, with the aim of instilling in them a greater awareness of the key issues involved that they can then carry with them into the future. This has been made possible by a design that sets out to cater for both the needs of research and development while also accommodating the public.

The philosophy behind Agrotopia stems from a view that the 21st century is a crossroads for the urban centers of the future – a time that demands that we rethink our cities. What major changes will we witness in response to the environmental, post-pandemic, social, migratory, economic, and political emergencies that have already brought some of the largest, busiest cities near tipping point?

Architect Carmen Andriani tries to answer these and other questions in her editorial published in The Plan 132. You can read her thoughts on Mutation here. Cities at the crossroads in the new century. Occupying a strategic location in terms of the logistics of Belgium’s agri-food industry and in the heart of Roeselare’s business district, the Agrotopia greenhouse can be visited by associations, companies, or groups of agriculture students, with tours conducted by a guide. It’s therefore possible to view the project first hand, while learning about the scientific research and developments shaping the future of horticulture. Tours are held on Monday and Wednesday afternoons and Tuesday and Thursday mornings. You can register on the Agrotopia website and download a suggested tour program.

Tours are free for schools and, to prepare for the visit, teaching materials can be downloaded from the website. The material is aimed at both schools and businesses who want a general overview of greenhouse horticulture and nutrition. Videos, audio files, and printed materials are also available online.

||| SUBSCRIBE TO THE PLAN ||| You’ll receive directly the most interesting stories from the architecture and design world, news on the latest projects, ratings and reviews, tips on video, photo galleries, and interviews 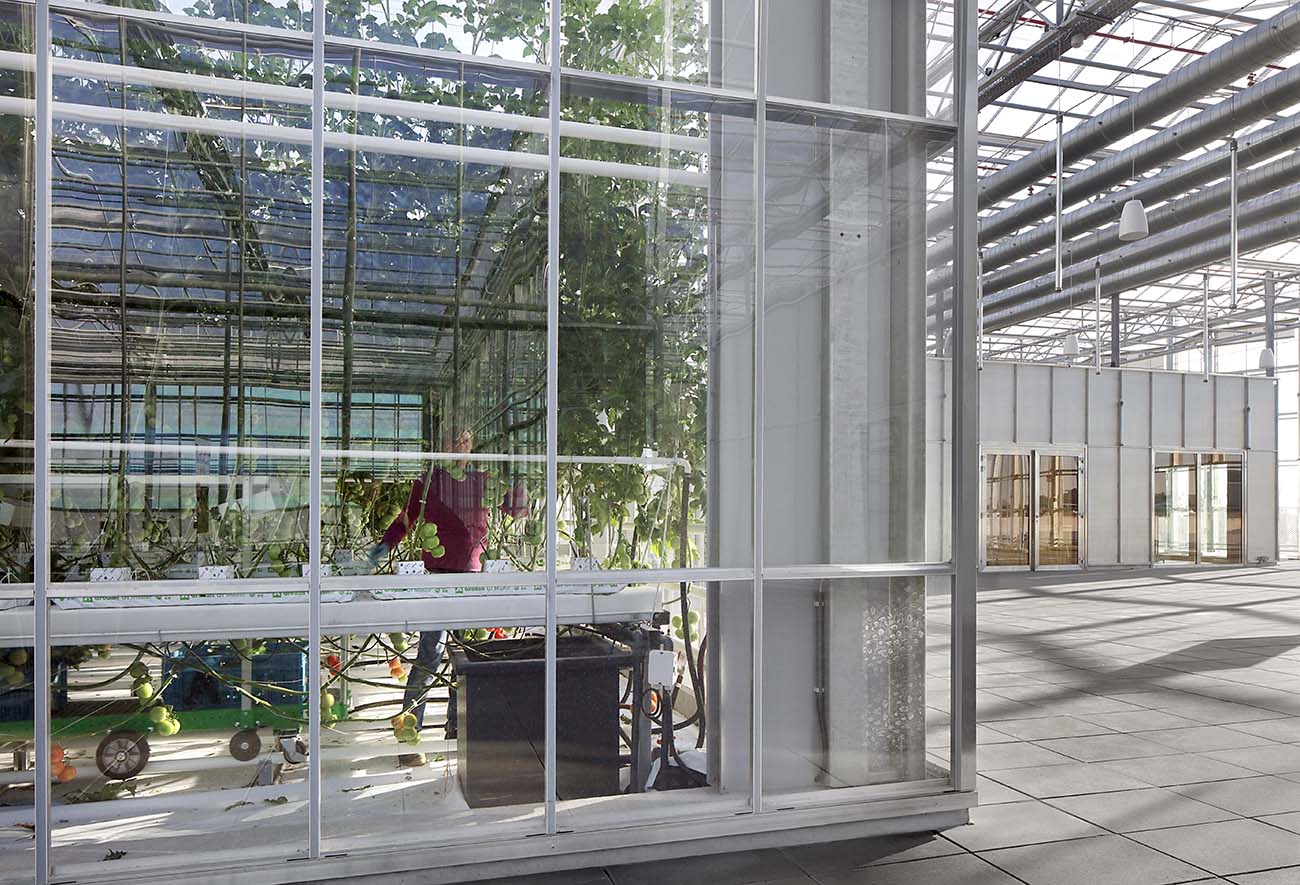 This community centre is a place for social gatherings and meetings, designed to be flexible to cater for small or large events.  The project wa...