Located at the south Tai Lake and be closed to the downtown of Huzhou city, the Central Business District of Southern Tai Lake is designed to harmonize with the Lougang landscape through its identity of new headquarters on the north and skyscraper complex by the lakeside. In general, the northern side is major for business and commerce, and the southern side would be an ecological community for living. Furthermore, two overhead green corridors connect the most active places, including the Jinshan Lake Park, business complex, exhibition center park, and a metro&port TOD center at the southwest. The district will be a core center accommodating 75,000 residents and white-collars, with about 130 hectares of ecology area provided. Based on the contextual natural resources, the project is aimed to integrate the high-density nature of Chinese urban development with the ecological culture and form a brand-new Chinese urban CBD with its own unique identity. To accentuate such a vision, preserve the biodiversity, merge the development plots, and persist in sustainability are the key principles to be followed throughout the whole design period. Huzhou is the only city named after the Tai Lake and the only remaining site of the oldest and most complete Lougang System. The traditional Lougang irrigation and drainage system represents the original living style of inhabitants and symbolizes both the Taihu Lake Plain and Huzhou city. Inspired by the distinct landscape feature, the original lakeshore avenue which separates the waterfront and business district is proposed to be shifted towards the south, forming an internal lake next to the development. The existing river channels and wetlands are preserved and adjusted to develop a series of quality waterfront public realms around the inner lake, creating an ecological system with green space and water features. The landscape pattern inherited from the Lougang irrigation system mimics the stormwater management process in nature to provide wildlife habitats, protect biodiversity and water quality. To maintain the character of a water town and prevent the chaos of city image caused by the independent development of single blocks, the land is sold and constructed as a whole parcel to form a unified and integrated urban image. Instead of the distinct style of structures and lack of interaction between blocks, the site is planned and organized at once, with unified appearance and well connections through underground passages. The design-build delivery method synthesizes the urban design, architecture, landscape, as well as construction process to build an efficient and connective city. The traffic system is supposed to be complex and well-organized to revitalize the city blocks. The vehicle roads will be modified to maximize efficiency and enhance the sense of natural landscape. The underpasses as diversions afford the traffic pressure and release part of the surface area to increase the social spaces for residents. Two skywalk corridors and platforms coordinated with the skyscraper complex and surrounding blocks provide a pedestrian-priority walkway to foster an energetic life experience without any vehicle traffic, and also enhance the association with the city. Cooperating with water traffic will further relieve the pressure of road traffic. The multi-layer transportation separates different traffic ways in order to create a collaborative and accessible place and gives a sense of safety for residents. Meanwhile, this project is trying to explore and create a future sustainable city through the adoption of low-impact development and low-carbon technology. Low-carbon technology is used in architecture and utilities design and construction. The natural base of the site offers preconditions to create a micro-climate in architecture construction. Based on the seasonal changing climate and response to energy-saving demand, the major business high-rise in CBD is designed to use renewable energy resources with extremely low carbon emissions. Adjustable shading, high-performance building envelope, and monocrystalline silicon photoelectric technology are combined in this single building complex to upgrade building system. The environmental-friendly and high-quality building achieved 3-star green building of Assessment Standard of Green Building in China and Nearly Zero Energy Building of China Association of Building Energy Efficiency. 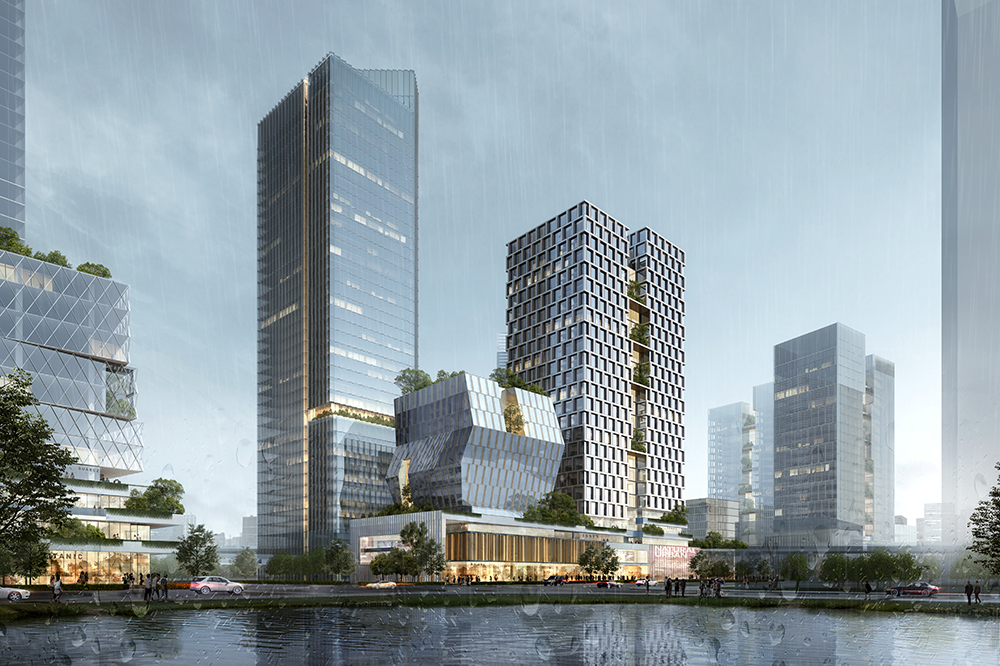 About gad : As an atypical design studio born in the transformation of rapid development of Chinese architecture design revolution, gad now is one of the most influential design companies countrywide. Instead of mass production, gad would rather choose to slow down and search for the existing significance of every space. A group of energetic and thoughtful young people gather together here to give rise to tons of interesting and fresh ideas. Now gad cooperates with insightful proprietors from diverse fields like hotel design, housing design, theater design and so on to boost new ideas for architecture, which at the same time, encourages itself to step into a better design world.