Palazzo Bertarelli, one of the most beautiful expressions of late Milan Art Nouveau and historic site of Italian Touring Club, has now become - after the redevelopment and restoration project - Radisson Collection Hotel Palazzo Touring Club Milan signed by Studio Marco Piva. SMP's far-sighted goal is to live the present while preserving the past and designing the future. This has guided the entire process of enhancing the entire building of Palazzo Bertarelli to accompany its elegant and sophisticated soul on a journey into the twenty-first century. The recovery of the authentic history that flows through the halls of the building is the result of a significant operation of great cultural interest: the architectural and interior design intervention, in order to preserve and give new luster to the historical and cultural heritage of the TCI, found inspiration in the travel concept. The selected materials, finishes, furnishings, every detail recalls those that, in the common imagination, are elements linked to the journey and the founding history of the Touring Club. The project by Studio Marco Piva intended to restore the imposing building built in 1915 to its original refinement: the 5-star hotel wants to become a reference point for an advanced tourism in constant dialogue with the city, to be at the service of both guests of the hotel and Milan citizens to affirm and spread the culture of travel in Italy and in the world. The guest and the citizen find themselves immersed in a unique experience: a cultural journey between past, present and future. The transformation of the historic Touring building is actually placed in the context of the regeneration of the association, which safeguards its social function and the testimony of its values. The style and direction of the project - decidedly innovative in the hotel industry - curated by Studio Marco Piva in collaboration with Radisson, fits perfectly with everything that represents the world of Touring. In this original operation, the Italian Touring Club regenerates its memory in what it wants to become the new traveler's home, giving it the maximum value and keeping together tradition, heritage and generation of resources. The concept underlying the project was divided into three main areas of intervention: linked to the monumental recovery of the façade; to the new needs with the change of intended use and with the re-functionalization of spaces; while maintaining a link with the pre-existing functions. A design project with great attention to detail, mainly custom designed by Studio Marco Piva and that combines historicity and modernity. The interior design operation carried out by Studio Marco Piva is destined to transform the historic Milanese palace into an iconic hotel in the city. The history and charm of the place have been beautifully reinterpreted in the new spaces and adapted to the needs of the "premium lifestyle" of hotels, for travelers and Milan citizens. 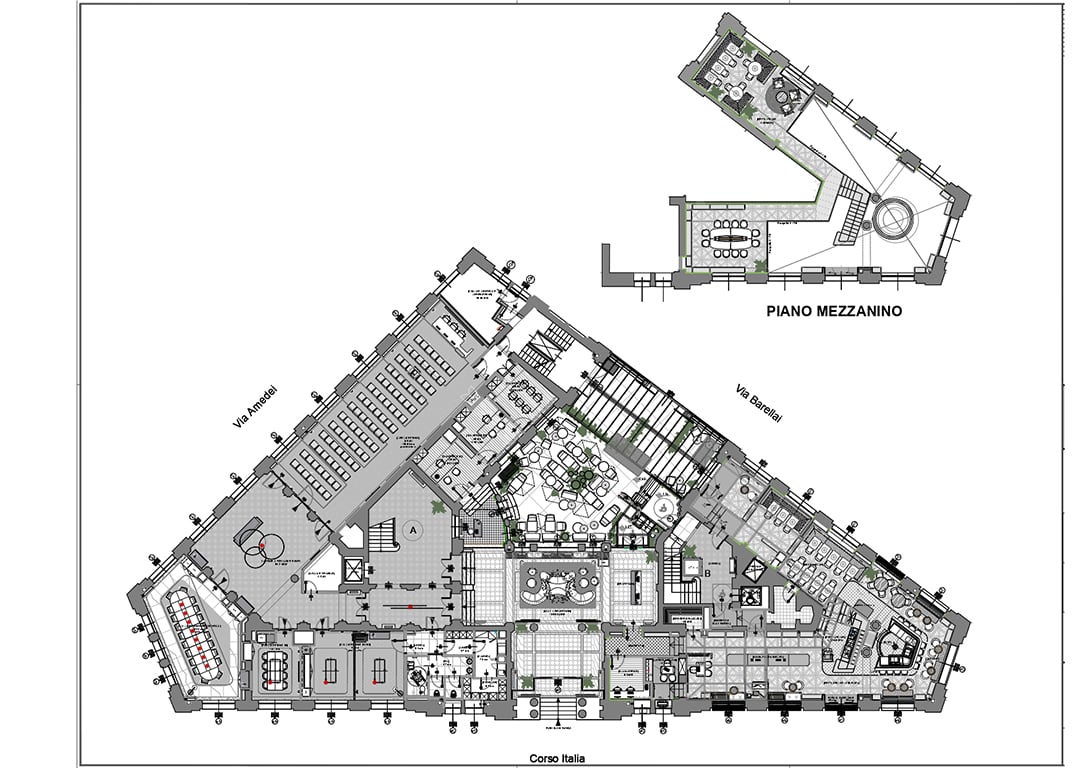 Studio Marco Piva is in the creative and multicultural heart of Milan: an academy of sciences more than a design studio, an experimental workshop where different design scales are dealt with methodological rigor, from masterplanning to architecture, from interiors to industrial design. The continuous research on the formal and functional characteristics of spaces, on technologies and materials, developed with great attention to the environment, are the founding elements of the design of the Studio.
Recent developments are the Radisson Collection Hotel, Palazzo Touring Club in Milan and Palazzo Nani in Venice, urban masterplans in China, the Tonino Lamborghini Tower complex in Chengdu, private villas in Beverly Hills, Shanghai, Melbourne, Accra, Dubai and Moscow, Princype and Syre residential complexes in Milan, the recovery of historic buildings in Milan, Venice and Shanghai, as well as the design of products for the most important Italian companies.